“They say pain is all in the mind, but they're wrong: It's all in my hands."

The Ecclesiast-King of Elze craved pain — forbidden pain. Such desires might be considered unwise in a less prominent political figure, but in a monarch of his stature, to satisfy such thirsts would have jeopardized the Divine Throne's very virtue. As a result, he turned to his demonologists in his dungeon, promising freedom to anyone who could summon a personal succubus of torment and bind it entirely to his service. The creature who arrived, Akasha, inflicted such exquisite torments on him that he dubbed her his Secret Queen, and he began to spend all his spare moments submitting to her cunning torments, eventually abdicating all his responsibilities in pursuit of the painful pleasures that only she could bring.Queen of Pain had the power to kill him, but she was rune-bound to keep him alive. Finally, the King's neglect of state caused an uprising. He was dragged from his chamber and thrown from the Tower of Invocations, and at the moment of death, Queen of Pain was released into the world, free of servitude—free to inflict her sufferings on anyone who dared to notice. 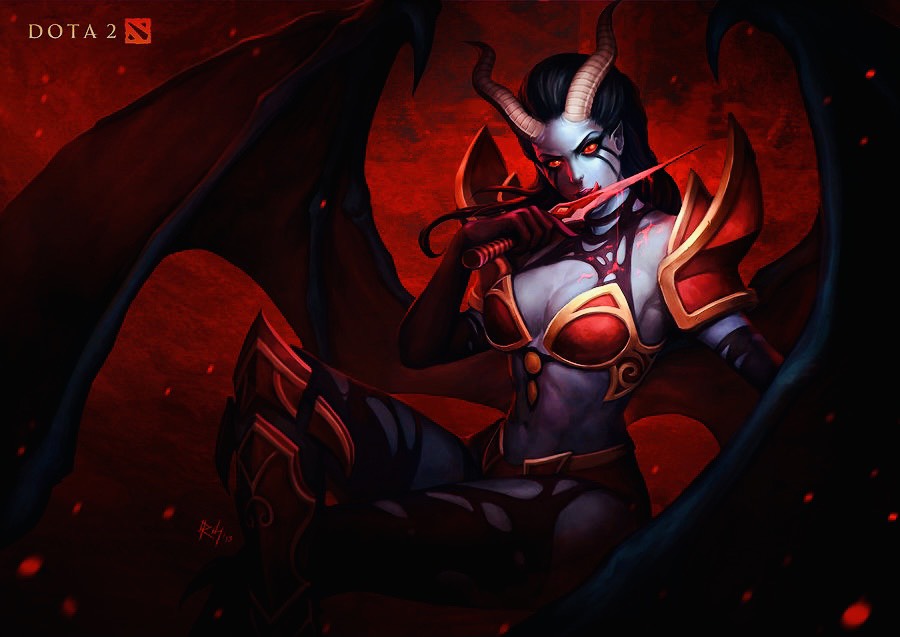 With all of these items in mind, the best way to construct your Queen of Pain is to first understand the items and basic abilities of your and your opponent's teams. Understand. Relate. Improvise, then execute. There is no such thing as 'the perfect build.' There is only one 'ideal build for a specific game.' Consider your own.

Effect: Hurls a poisoned dagger, dealing significant initial damage and then dealing damage over time. For 15 seconds, the poisoned unit's movement speed is slowed. Every 3 seconds, an instance of damage is dealt. The Queen of Pain revels in inflicting pain, healing every time the enemy is damaged. Creeps only heal for half the damage.

Effect: Queen of Pain can move in and out of combat by using short-distance teleportation.

Effect: Creates a massive wave of sound in front of Queen of Pain, dealing heavy damage and pushing all enemy units back.

Magic Wand: Provides Queen of Pain with much-needed burst regen that can be used in emergencies.

Witch Blade: Provides her with intelligence, armor, attack speed, and a passive ability.

Orchid Malevolence: Gives Queen of Pain silence to keep the hero she's blinking on from fighting back, as well as a lot of mana regeneration and damage increase.

Linken's Sphere's: Spellblock provides all-around attributes and regen to Queen of Pain, allowing her to survive long enough to blink to safety.

Mjollnir's: Chain Lightning and Static Charge, when combined with Spell Lifesteal, can significantly increase Queen of Pain's survivability in teamfights.

Bloodthorn: Is a natural late-game improvement over Orchid Malevolence. It can be purchased in advance to assist Queen of Pain and her team with evasion.

Assault Cuirass: Is a different armor piece that aids Queen of Pain's team in capturing objectives such as towers and Roshan.

Eul's Scepter of Divinity: Can either dispel silence or buy Queen of Pain enough time to blink while providing cheap mana regen.

Scythe of Vyse: Gives good attributes, increasing Queen of Pain's survivability while also providing her with the mana she requires to cast her expensive spells Hex is also one of the most powerful hard-disables in the game, capable of completely reversing teamfights.

Blade Mail: Can reflect all of her nukes, particularly Sonic Wave

Orchid Malevolence: Silences her, preventing her from fleeing or unleashing her magical burst It can later be upgraded to Bloodthorn, allowing anyone to easily dispatch her.

Rod of Atos: Prevents Queen of Pain from fleeing or initiating combat.

Scythe of Vyse and Abyssal Blade: Have immediate disables.

It's your time to shine, Queen of Pain, in the early game. Almost every hero on the map is weaker than you and cannot compete with you. Go mid with the recommended items; possibly, ward the cliff of the opposing solo Mid-lane in order to have complete control over his actions and the rune. Keep in mind that warding the side closest to the carry is more beneficial because it may reveal potential ganks targeting your main carry.

The gameplay is straightforward: keep spamming Shadow Strike as much as possible to harass the Solo-Mid. To keep your lane control, get a bottle, push the lane, and blink out for the rune.(You already have the ward, so you know where to look for the rune.) Finding a Haste, D.D, or Invisibility can guarantee a kill on either lane; repeat while maintaining your farm. You are not farm dependent, but you can benefit greatly if you are. Ward up again around 6:00 p.m. Continue harassing with Scream of Pain while gaining more last hits in the process.

Your ultimate is strong, your right clicks are strong, and you should have all of your items, P.T, Bottle, Wand, and half Scepter, by now. You only want to kill. Continue to target carries as much as you can. Maintain your mana pool with rune control, and keep some Dust of Appearance in your inventory to hunt down the Invisible carry, who can be a nuisance in the later scenario. Be present in each and every gank while doing so. Farming is not an option; you must farm on heroes or farm with abilities as you progress to ganks. You only need good positioning to get kills, not farming. Allow the carry to do their work while you do yours.

Your Scream of Pain has little effect on anyone, even though your ultimate still hurts a lot; however, at this point, you can't solo-out anyone. Carriers have a B.K.B., while supports have a Meck. You must have quick hands and strike at the right moment to cast your ultimate, and a couple of heroes will be destroyed. Do not prolong the game; instead, finish it as soon as possible because you are no longer regarded as a major threat.

Your time has passed, and you are now viewed as a butterfly struggling to bring down massive monsters. There isn't much you can do except stand by your carries and assist them as best you can. You must rely on your right clicks and carries rather than your nukes. They are unlikely to cause any harm. Getting an Ethereal Blade, Heaven's Helbard, or Shiva's Guard to defend yourself against carries can be beneficial.