“Among the Transcendences, you would be thought ignoble”

Just as the higher form of energy seeks to lower it, the Specter known as the Mecurial is an intense and ferocious being who finds it irresistible to draw from the sights. bloodshed takes place outside the physical world. While its spirit form transcends the limits of sensation, every time it manifests as a physical entity, it is attacked by a part of its body that has been lost – for no purpose whatsoever. During the melee, its identity shattered and reshaped, and then its consciousness. It is the Specter - Mecurial, as well as all its other illusions everywhere of the only true Specter. It focuses on the skirmish for survival; its true mind speaks for itself; that until the last moment of success or failure of this war, it will overcome everything to return to its eternal form once more.

Specter is a hero that is quite famous for his ability to defend but all: Good wide area damage, extremely low damage reduction, high mobility, hard to die… A strong carry whose gameplay is biased towards melee combat rather than solo with a strong sweeping ability, putting great pressure on the enemy team once they have the necessary items. It's hard to escape Specter when she possesses the ability to reach any hero anywhere, anytime with her useful ultimate global.

But it's really not easy to turn Specter into a destruction machine, because she needs a lot of equipment and farming time. A hard carry with a very weak start, Specter can only go into farming to get core items to become stronger, only then will her skill set really come into play. She is also very easy to die at the beginning of the game if not carefully protected, Specter is inherently slow, has low health, and does not possess many good escape skills. And if unfortunately, the Specter is a real burden. The risk with this hero is as high as the opportunities, the power it brings, Specter is not an easy pick for new players to play. 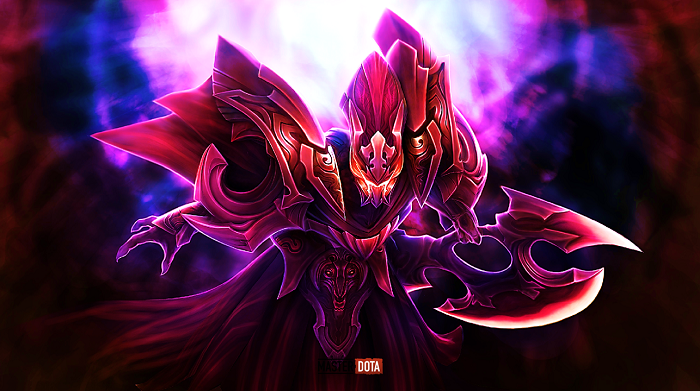 There are 2 ways to increase skills:

Method 1: Focus on maxing Spectral Dagger (Q) first because this is a good damage skill in the early game, it gives you the ability to slow enemies, speed yourself up when hunting and the ability to run through terrain extremely useful. Desolate (W) takes 1 point initially to take some damage when solo, Dispersion (E) is the ability to max next because it greatly increases Specter's resistance. Ultimate Haunt (R) gets the correct level and the Attribute Bonus will come last.

Method 2: This time Desolate (W) will be maxed in tandem with Spectral Dagger (Q), these 2 skills are the main source of damage for Specter making this hero stronger in confrontations. Dispersion (E) only takes 1 point, Ultimate Haunt (R) only takes 1 point because leveling up this skill only increases the duration of the ghosts but does not make them stronger. Attribute bonus points will therefore be added earlier to improve Specter's stats.

Effect: Specter throws a blade that carries a Shadow Path to damage and slow enemies. This shadow is the cause of the slow, enemy champions hit by Spectral Dagger will trail the black trail on the ground. Other enemy heroes that step on the black streak will also bring the same black streak, all of which are slowed and revealed for a short time. Specter gains movement speed and the ability to cross terrain if traveling on Shadow Path.

Shadow Path Effect: 12s (since they were created)

Effect: When Specter attacks a standing enemy alone she deals pure damage to them.

Condition: When around 325 AoE the enemy has none of its allies

Effect: Specter is mitigated and reflects around a portion of the damage she takes, dealing pure damage to enemies. The further away you are from the Specter, the lower this damage is.

Effect: Cast on the ground allows Specter to swap positions with the closest phantom to the target location created by Haunt. Can be used repeatedly between ghosts.

Effect: Allows you to Haunt a single unit at a time. On the target, a Spectral Dagger is cast.

Effect: Summons Specter's clones to attack all enemy Heroes on the map for a short time. During this time Specter has the ability to replace the position of any ghost created by the ability Haunt with an active called Reality.

Power Treads: With their characteristics, Power Treads help Specter's illusions. The extra assaults with Desolate may result in a kill against weaker enemies who are unable to deal with the illusions.

Radiance: Radiance complements Specter's tanky and AoE combat style by speeding up her farm and dealing burn damage to all foes during Haunt.

Manta Style: Manta Style allows Specter to farm quickly by sending illusions into lane or into other jungle camps, which they can wipe down with Radiance and then combine with Desolate to deliver massive damage to unprepared adversaries.

Heart of Tarrasque: Heart of Tarrasque provides a large amount of life and regeneration, which, combined with Dispersion's damage mitigation, makes Spectre difficult to kill while also reflecting harm back on her adversaries.

Butterfly: Butterfly increases Spectre's and her illusions' damage output and durability by giving them agility and evasion.

Diffusal Blade: Diffusal Blade boosts the damage your illusions deliver, provides some much-needed mana and agility, and is slow to keep up with your opponents.

Mask of Madness: Mask of Madness is a useful agricultural tool in the early game. You don't mind being silent after you've haunted, rifted to a target, and thrown your dagger, and you'll happily take the increased movement and attack speed.

Vanguard: Vanguard provides a significant amount of damage reduction, which is determined once Dispersion is applied. It also provides much-needed early-game HP and HP regeneration, which most farming heroes require in order to farm without taking pauses.

Blade Mail: Blade Mail complements Spectre's persistent AoE damage and punishes foes that attempt to lock you down. It can also make it easier to farm ancient stacks.

Sange and Yasha: Sange and Yasha are a snowballing item found in the middle of the game. The stats are well-suited to illusions, and the increased movement speed will aid Spectre in staying on track.

Eye of Skadi: On Spectre, the Eye of Skadi is a nice luxury item. The stats aid with dispersion and illusions, while the slow means foes won't be able to get away from you, and the mana can help maintain the Spectral Dagger talent's low cooldown.

Assault Cuirass: Assault Cuirass increases the durability and damage of Haunt while also providing increased armor and attack speed to any teammates within range.

Abyssal Blade: Abyssal Blade increases damage and HP, as well as providing spell immunity-piercing disable and pursue potential, which draws attention back to her.

Mjollnir: Mjollnir offers a lot of farming and push potential, while also fulfilling Radiance's AoE damage function, scaling better and being easier to build up. The attack speed is beneficial to illusions, but the lightning effect is not.

The early game stage is quite hard for Specter as mentioned above, if the opponent in the lane is long-handed or the harasser, it is still tiring. It's okay, just bear with this stage, you guys have the saying "one thing, nine things of shame" and the other "good", just be careful above all, Late game many things ask it late. Don't Did you waste time participating in the teamfight to do anything, what was there to fight? Spectral Dagger (Q)? Throw half of the mana bar, but it hurts, but it doesn't do much damage. Get the Early game items to finish. When you have the ultimate, take a hard look at the map for a bit.

Your mission so far is still farming and farming. Get the Radiance with the Diffusal Blade, then join the fray. Occasionally there will be a few fights, choose when the enemy has a little health to go to the ulti, just Haunt (R) and then throw the Dagger to get a kill. Pick up any coins or coins, accumulate small to become great. Well, if you notice something missing on the map and withdraw, it's very difficult to get caught.

Your Spectral Dagger (Q) has many effects. In addition to ganking enemies, the Dagger can let you run across terrain. If you are caught alone, just calmly throw the dagger into the edge of the forest or corner, try to hide there or the enemy will not be able to reach it. Waiting for the situation to calm down, Portal will come later. Or it even creates a shortcut for you to avoid having to take a long detour, but look at its mana so that you don't abuse it.

Even your Haunt (R) has a lot of that effect. Used to approach combat, fight, or simply when there are many items and then pop up to scare the opponent away. It can also be used to escape if you're lucky. If you get caught odd, just ulti and then choose which guy is the least dangerous on the map to fly to. But don't aim at the carry guys, if it kills you, you only have to pay for it. Get all the core equipment and go to war!

If you are fully farmed, you will become very strong, if they dare to focus on you, they will definitely eat Dispersion for the whole team. Now you are the most important member of the team, do not go alone, replace the position of tankers in the teamfight to make the most of this hero's skill. Focus on destroying the enemy Support first, they protect the remaining members very annoyingly. Then there are the Carry and finally the tankers. Let's pull down the enemy's main house.