As the first son of heaven, Mars became the center of attention, raging through the battles. He caused and witnessed countless battles in his long life. Whether because of hatred, controversy or in the name of justice, all the battles that Mars experienced were brutal.

Inheriting his father's personality and being somewhat more impulsive, his infidel tendencies are even somewhat more than that of Zeus. Sometimes Mars felt that battles no longer satiated his hunger, causing his mind to be more driven. Consecutive battles are waged for a purpose he considers greater. However, only the remaining participants or remnants can clearly feel that the things that Mars causes are only brutal and miserable. 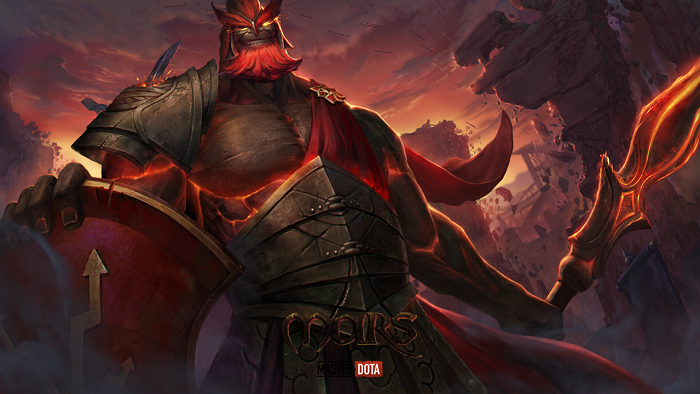 How to play Mars Dota 2 has a flexible transformation depending on the location as well as the enemies that Mars has to face. The strength of Mars in the early game is quite large, he will unleash his potential with the Spear of Mars and Arena of Blood, so you should increase these 2 skills first.

Bulwark is a defensive move that helps Mars block attacks and damage dealt by enemies. Therefore, you should only +1 skill point in the early game. Late game stage, when the above 2 skills have been maxed, start adding points.

Arena of blood is the ultimate move that can both control and deal great damage, so when you have a plus, you need to increase the skill immediately to optimize the power of this skill.

Can be dissolved: Only strong dissolving

Effect: He deals damage to any enemy hit by the thrown legendary spear. The first champion hit is not only dealt damage, but is also pushed back. Enemies will be stunned if pushed back hit cliffs, structures or trees.

Effect: Besides Beloved, Mars is also equipped with a shield. He possesses his shield to both protect himself and defend against enemies. Smashing shields on enemies can knock them back, dealing damage and crit their next basic attacks.

Effect: Activating this ability, his shield will be enhanced to become even bigger with the ability to block physical attacks from all sides: front, back, his sides.

Effect: The undead warriors of the Ashes will be summoned around an arena created by Mars. Any attack or movement in and out of the arena will be blocked. Enemies in the citadel are not only attacked, dealing damage, but also being knocked back within a radius of 550 units.

Soul Ring: Mars may maintain using the Spear of Mars and God's Rebuke thanks to the Soul Ring.

Clarity: Clarity's let you harvest and maintain your mana pool at a far quicker rate than other heroes.

Bracer: Bracer is a nice situational choice because it provides Mars some early magic resistance as well as some stats.

Magic Wand: Magic Wand, which has been enhanced from Magic Stick, has more features.

Desolator: Mars can swiftly take towers with Desolator throughout the mid game, which is where he excels.

Black King Bar: Black King Bar offers spell immunity, which may be necessary if the other team has a high number of stuns, which can prevent you from being effective and disruptive.

Heaven's Halberd: Mars can use Heaven's Halberd to prevent a hero from attacking if that hero has break or spell immunity (if he can use it before them).

Vanguard: When the opponents are not striking Mars from the front, Vanguard will make it difficult to kill him with physical strikes.

Crimson Guard: Crimson Guard is a powerful physical damage dealer who may assist your squad in pushing forward.

Players should equip a Quelling Blade, as well as some regeneration and stat items, at the start of the game. Making a bracer will increase Mars' inherent toughness. He has good base damage, and with the bracer, he can easily battle last hits and denials with the opposition carry.

Spearing foes back into Mars' tower is one method to ensure victory in the lane. In Dota 2, the tower is one of the most powerful sources of damage in the early game. It is a certain kill if an adversary can be impaled into it. Supports with a debilitating ability work well with Mars since their abilities can be combined.

Because Mars has a small mana pool, a bottle can help you farm more efficiently.

The best conceivable item for Mars is Eul's Scepter. It's one of the few items in Dota 2 that ignores Status Resistance, which makes it ideal for combining with other abilities. In the case of Mars, Eul's setup is suitable for Spear of Mars to shock foes. With his ultimate, he may even combine Eul's and Spear's abilities.

Another essential equipment for Mars is the Blink Dagger. It enables him to get the upper hand on opponents and prevents them from fleeing. The Shard-upgraded Spear of an Aghanim may impale two foes at once, making it extremely effective in team battles. One of Mars' only flaws is magic immunity, which Black King Bar provides.

If Mars' squad is lacking in damage, Desolator is a solid option, while other situational items include auras like Vladimir's Offering and Pipe of Insight. On this hero, Solar Crest is also fantastic, and during mid-game, Mars' objective should be to assist his team's carry to win fights and take control of the map.

Late-game key goods are scarce on Mars. All late-game goods are situational, depending on the team's need. Mars is one of Dota 2's most resilient heroes, and a Heart of Tarrasque or Shiva's Guard may help him stay even longer.

Blink Dagger may be upgraded to Overwhelming Blink, which increases Mars' strength and deals additional damage. During combat, an Assault Cuirass or Lotus Orb can benefit both Mars and his squad, while an Aghanim's Scepter greatly enhances his damage output.

Mars players should concentrate their efforts in the late game on capturing the enemy carry in their arena and ensuring the safety of their own carry. Arena is one of Dota 2's strongest talents, and a successful Arena may determine the game's fate.

Mars, being one of Dota 2's most popular off-laners, may be used in a variety of roles. He can be a tank, an initiator, or a damage dealer. Arena of Blood may be utilized for everything from slaying opponents to rescuing teammates.