“There can never be too much sacrifice.”

After escaping the pain in the holy kingdom of Nothl, Huskar opened his eyes to find himself under the influence of the dark priest Dazzle. Huskar's soul had escaped eternity after resisting the ancient rituals of the Dezun clan, but now he found an irresistible change in him, like all others. entered the kingdom of Nothl. His body no longer resembled that of a mortal, Huskar's bloodline had now become a source of unimaginable strength. For every 1 drop of blood in his body, a fiery power is returned to him, TEN TIMES. However, this gift made Huskar not happy at all, because during his rescue in Nothl, Dazzle deprived him of the opportunity to enter the divine order. Huskar was martyred, but now everything has been completely denied.

As the Dezun elders sought to expand their influence, they agreed to use Huskar as a formidable tool for this campaign. However, Huskar is even more unhappy about this, because the tribe that once denied his inheritance, now wants to use him as a weapon. And when the first sparks of war were kindled, Huskar fled his homeland, his ancestors, to find new allies, hoping to use the energy he could free up for a righteous cause. 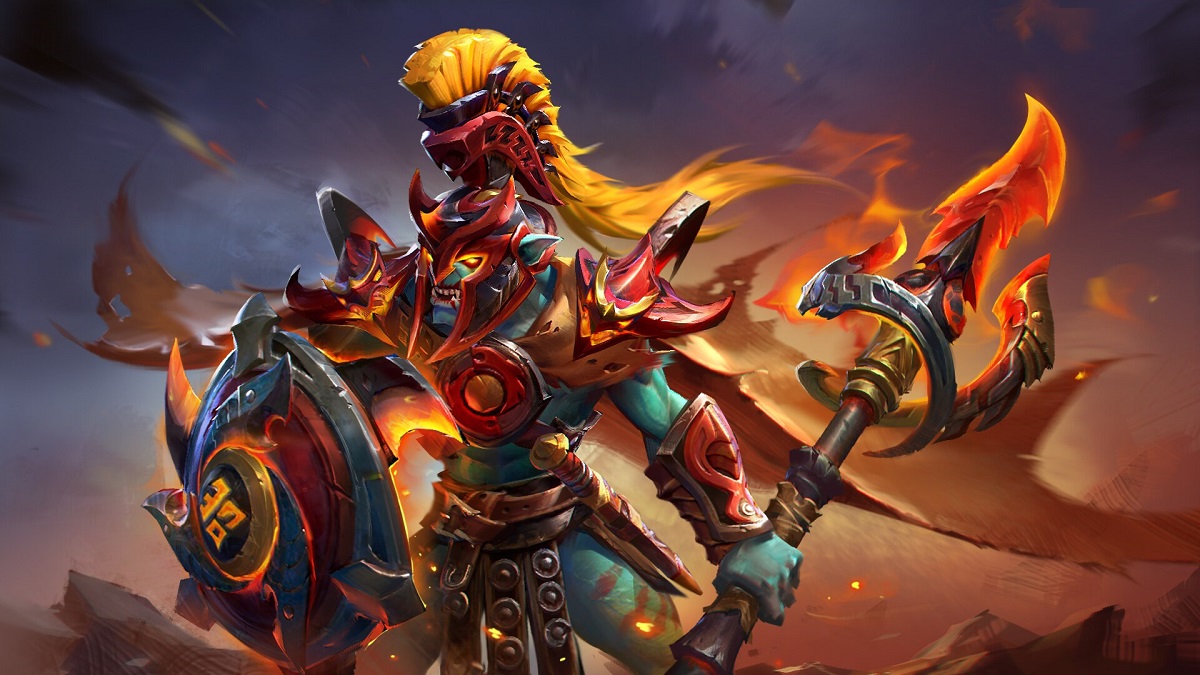 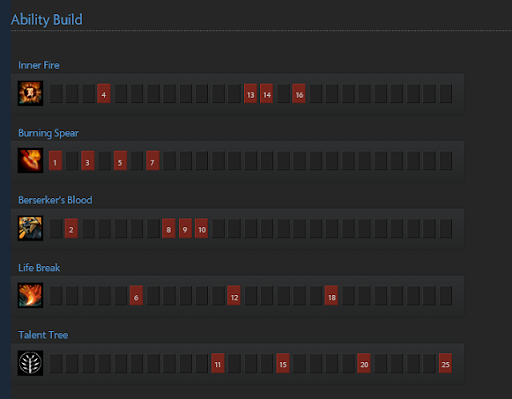 There are 2 ways to increase Huskar's skills, with the first way you will play in a safe way when maxing out Inner Vitality (Q) and Berserker Blood (E), ensuring Huskar's healing ability as well as being ready to turn on. back to the enemy when they chase you (in case they don't have enough time to stack physical damage, whoever is more prone to hand damage and chases you, your chance is much higher). Get 1 point of Burning Spear (W) to poke the enemy's health as well as use orb walk (which is to click on that skill and then use it on an enemy champion, creeps will consider you to use a spell, not a normal hand attack on the champion should be ignored).

The second way to raise Burning Spear (W) and Berserker blood (E) at the same time is more inclined to poke the opponent's blood in the first minutes (extremely annoying) and can brazenly turn away when the opponent has eaten. 4 to 5 fire javelins in the face for them to die slowly in pain, but with this type, you need more equipment to heal yourself, still ensure safety from sources of magic damage. With all build types, no matter what, the ultimate must still get the right level.

Note: this skill can be used with lifesteal equipment.

Note: this skill gives you 1 stack immediately while you are still full of health.

Loss: 35% of your current health

Effect: leaps to a target enemy and stabs him with a powerful javelin, burning 35% of that target's current health and slowing the target's movement speed by 40%/50%/60 %

Effect: Deals increased damage to 65% of the target's current health.

Magic Stick: When Huskar's health is low, the Magic Stick can save him from burst damage.

Armlet of Mordiggian: Armlet of Mordiggian supplies Huskar with every stat he requires to be more effective, and its Unholy Strength allows Huskar to manage his health. If you can master armlet toggling, Huskar's damage output will skyrocket, and he'll be able to utilize it to survive fights as long as the adversaries don't have damage-over-time skills.

Morbid Mask: Huskar may lifesteal from strikes with Morbid Mask, allowing him to maintain the health cost of Armlet of Mordiggian and Burning Spear. In the late game, it becomes Satanic.

Black King Bar: Huskar may wade into the battle with minimal chance of dying thanks to Black King Bar, which cancels Life Break's self-damage and most opponent disables.

Satanic: Huskar can maintain his health while under attack from the opposition team thanks to Satanic. Strength, damage, and lifesteal are all provided by it. Its active ingredient might also be employed to prevent death in an emergency.

Heart of Tarrasque: Huskar can maintain Unholy Strength active indefinitely, and Heart of Tarrasque provides enough health to keep you at a low enough percentage to generate stacks from Berserker's Blood without being burst down.

Abyssal Blade: Abyssal Blade Procs of Abyssal Blade Even with the lowered probability, Huskar's strong attack speed allows him to bash at a respectable pace, and Overwhelm is a devastating follow-up to Life Break.

Hood of Defiance: Because Berserker's Blood no longer defends Huskar against magical burst damage, Hood of Defiance may be upgraded to Pipe of Insight to assist the team.

Blade Mail: Huskar obtains an advantage over high-damage opponents by turning their damage output against them with Blade Mail.

Pipe of Insight: Huskar's damage output is considerably reduced by Pipe of Insight, which lessens and/or blocks the damage inflicted by Burning Spears and Life Break.

Huskar can completely play aggressive in the early game, he can go solo lane or dual lane. With the ability to orb walk right from the first level, he will easily poke the enemy's blood thanks to the ability Burning Speard (W) without fear of being hit by the creeps in the lane, but with the cost of blood to do this. So managing the amount of blood based on the equipment you have in your body is always extremely important if you don't want to run out of blood later and can't be aggressive anymore.

The way to play Huskar is also nothing special because this is a hero of the vegetarian type, not much combo skills. If the enemy in your lane is in a magic damage-oriented genre like a nuker, it is extremely easy for you to defeat him.

This is the time when you should gank a lot with your teammates or call your teammates to help if you are solo lane to put pressure on the opponent. The fact that your ultimate has a cooldown of only 12 seconds allows you to use it continuously so Huskar's gank ability is extremely annoying.

Try to get kills to accumulate points for Urn of Shadow to ensure your health as well as support healing for teammates, combined with the ability Inner Vitality (Q) allows you to not need to go home regen (2 skills use your own health). With damage as % of health, you can stick your spear at anyone even if that person is a stubborn tanker, but you should pay attention to whether the opponent buys Blade mail or not lest you get enough.

With thick targets, you should wait for your teammates to kill it if you don't want to lose food or die backwards, but with weak health targets, you can completely finish them off quickly. The equipment I always carry with me right now is the Town portal scroll.

You can play the role of initiator in this phase by ironing directly into the enemy squad, catching dangerous skills, cornering the enemy to create an opportunity for allies to attack (note that timing and buff Inner Vitality first then do this).

When equipped with Aghanim's Scepter, you can drag the health of all enemy heroes to low quickly with your ultimate. Huskar is a not too prominent turret pusher, so if there's nothing special, don't leave the team and go farm to split push.

If you already have Boots of Travel, it's okay, but if not, take the time to spend 1 slot to store the Town portal scroll, so you can support your teammates in time or return to tower defense.