OmniKnight was originally a skilled knight, well-trained, through many trials and tribulations, and traveled many miles in storms and rain. He swore to spend his life just working for Omniscience. Experiencing many wars to fight the evil intentions of heretics, in these bloody wars, OmniKnight's predecessors and close comrades sacrificed, one by one, he himself encountered many obstacles. perilous disaster.

Then he decided to leave the army and go to see the cardinals of Omniscience. Here he was selected by Omniscience to enter, now he has a divine power. It is from here that a new journey opens for OmniKnight, and at the same time, his comrades who have fought with him, even if they are still alive, have died because of him, they are blessed. 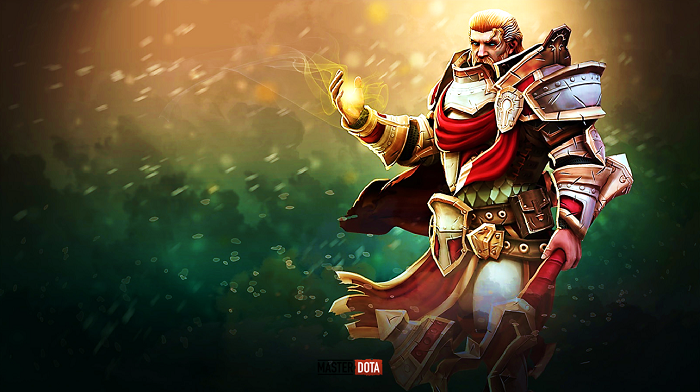 Increasing skills in the right direction is an extremely necessary factor to contribute to a quality OmniKnight DOTA 2 gameplay, in order to bring out the full potential of this powerful warrior general. Therefore, gamers should pay special attention to this factor. Increase skills for specific OmniKnight generals as shown below:

Effect: Heals a friendly unit while inflicting damage on all adjacent hostile units.

Effect: Increases Status Resistance, Strength, and Health Regeneration for an ally by erecting a holy barrier around them.

Effect: Enemy troops that wander too close are severely hindered in their ability to maneuver.

Effect: For the following 4 seconds, Omniknight's next attack does extra pure damage based on 60 + 115 percent of his base damage, and all outgoing damage from the target is reduced by 60 percent. 10 minutes of cooling down

Boots of Speed: Omniknight's Boots of Speed are vital since he can utilize Degen Aura to slow down foes, whether pursuing during a gank or body-blocking chasing attackers attempting to kill your carry. Given how position-dependent all of Omniknight's spells are, boosting his movement speed should be a top goal.

Urn of Shadows: The Urn of Shadows is a potent support item that boosts Omniknight's ability to heal allies and deal magic damage. The item gives Omniknight extra strength, improving his HP and basic damage, as well as some mana regen to assist him better manage his mana pool.

On top of Purification, the active allows Omniknight to use additional heal or inflict extra magic damage in combat.

Soul Ring: The Soul Ring should be Omniknight's first significant purchase, as its active ability allows him to throw Purification more frequently than once every several minutes. Omniknight can become significantly more aggressive in teamfights and ganks by reducing his mana requirements.

Magic Wand: For a small amount of money, Omniknight can get a Magic Wand that gives him additional characteristics and allows him to quickly recover 255 life and mana, enough to cast any of his skills.

Arcane Boots: Arcane Boots are required to expand Omniknight's tiny mana pool, letting him use his mana-intensive skills more frequently. Furthermore, he may use his active ability to restore his and his team's mana pools, which is an important role for a support hero.

Mekansm: Omniknight gains another source of healing from Mekansm, this time one that impacts his friends. It's all-around qualities and additional armor also enhance Omniknight's tankiness, but make sure your mana pool is high enough to sustain Mekansm's usage, since it is incredibly mana-intensive.

Guardian Greaves: Guardian Greaves are a good late-game purchase for Omniknight, since he frequently develops a Mekansm and Arcane Boots. Combining the two things into one inventory slot frees up room in the late game for more items, reduces Mekansm's mana cost, and boosts its aura even more.

Omniknight may also use self-dispel to remove debuffs on himself that are hindering him from contributing successfully in teamfights.

Aghanim's Scepter: Aghanim's Scepter transforms Guardian Angel into a global ability, increasing its effectiveness by granting physical immunity to all allied structures and removing the requirement for Omniknight to be with his comrades to benefit from it. It also bestows upon him extra abilities, such as life and mana.

Lotus Orb: Omniknight may use the Lotus Orb to severely thwart foes' attempts to concentrate down on him or a partner. Omniknight gains higher armor and mana regen as a result of the item's perks, improving his durability and allowing him to perform spells more frequently.

When he uses Echo Shell on himself or a teammate in a fight, he may leverage his opponents' disables and magical nukes against them, slowing down the combat and allowing him to deploy his defensive spells.

Orb of Venom: Orb of Venom is a good early-game purchase since its slow stacks with Degen Aura's.

Scythe of Vyse: Omniknight gains mana regeneration and a hard disable from Scythe of Vyse, dramatically improving his teamfight involvement and ability to gank targets.

Shiva's Guard: Omniknight gains a lot of armor and intelligence from Shiva's Guard, which helps him increase the size of his mana pool. In teamfights, Degen Aura's active and passive abilities combine, allowing him to severely hamper adversaries' attempts to strike and move about.

Vladmir's Offering: Vladmir's Offering is an excellent all-around utility aura item. Your squad benefits from the armor and mana regen auras, as well as the lifesteal and attack damage bonuses.

Refresher Orb: Omniknight can cast Guardian Angel twice with Refresher Orb, as well as employ Purification and Heavenly Grace in fast succession. However, recharging your cooldowns costs a lot of mana, so if you want to create this, you need first raise the amount of your mana pool.

You will definitely have to go to the same lane with Carry. The first step is to keep an eye on the surrounding areas to carry the farm. Occasionally, you can use the Purification skill to poke nearby enemies. The most effective way to do this is to buff any creeps that are near the enemy and call on your teammates to jump into the general buff. A model Support should not be too aggressive. Omniknight's mana is very low, so don't waste it.

When you see your teammates affected by the ability to control, use Repel to save them. At the same time, time to clear runes in the most accurate way. Omniknight can't roam, so when the team needs help, use the Town portal scroll skill.

You will definitely have to go to the same lane with Carry. The first step is to keep an eye on the surrounding areas to carry the farm. Occasionally, you can use the Purification skill to poke nearby enemies. The most effective way to do this is to buff any creeps that are near the enemy and call on your teammates to jump into the general buff. A model Support should not be too aggressive. Omniknight's mana is very low, so don't waste it.

When you see your teammates affected by the ability to control, use Repel to save them. At the same time, time to clear runes in the most accurate way. Omniknight can't roam, so when the team needs help, use the Town portal scroll skill.

At this stage, try to build up the remaining items. Because at the end of the game, Omniknight Dota 2's strength will be weaker without the main items. You must be present at all times and accompany your teammates. Van keeps warding status to maintain distance from the opposing team. You will be your first target in the teamfight so always be careful. The way to use the skill is still similar to the previous stage. When participating in combat, please activate combat support equipment in time to be effective.