“ Friend or foe, in the wake of the confluence, you will follow where I lead."

Even the other spirits deny having a grasp on Inai the Void Spirit, the oldest among them, and his thoughts and schemes. The Void Spirit, who is in possession of knowledge that would astound a mortal, observes the workings of the universe from a position of unknowability and chooses to delegate his will to well-trained servants. He only leaves his Hidden Temple and enters the physical plane when he believes that he alone is capable of directing reality in the right direction. With a broad view of reality, Inai is intensively focused on a moment in time that he cannot see beyond, at which the threads of several realities are destined to converge. He now emerges from the aether to personally put an end to the fight amongst the Ancients and get his friends ready for what he believes will be a bigger conflict. 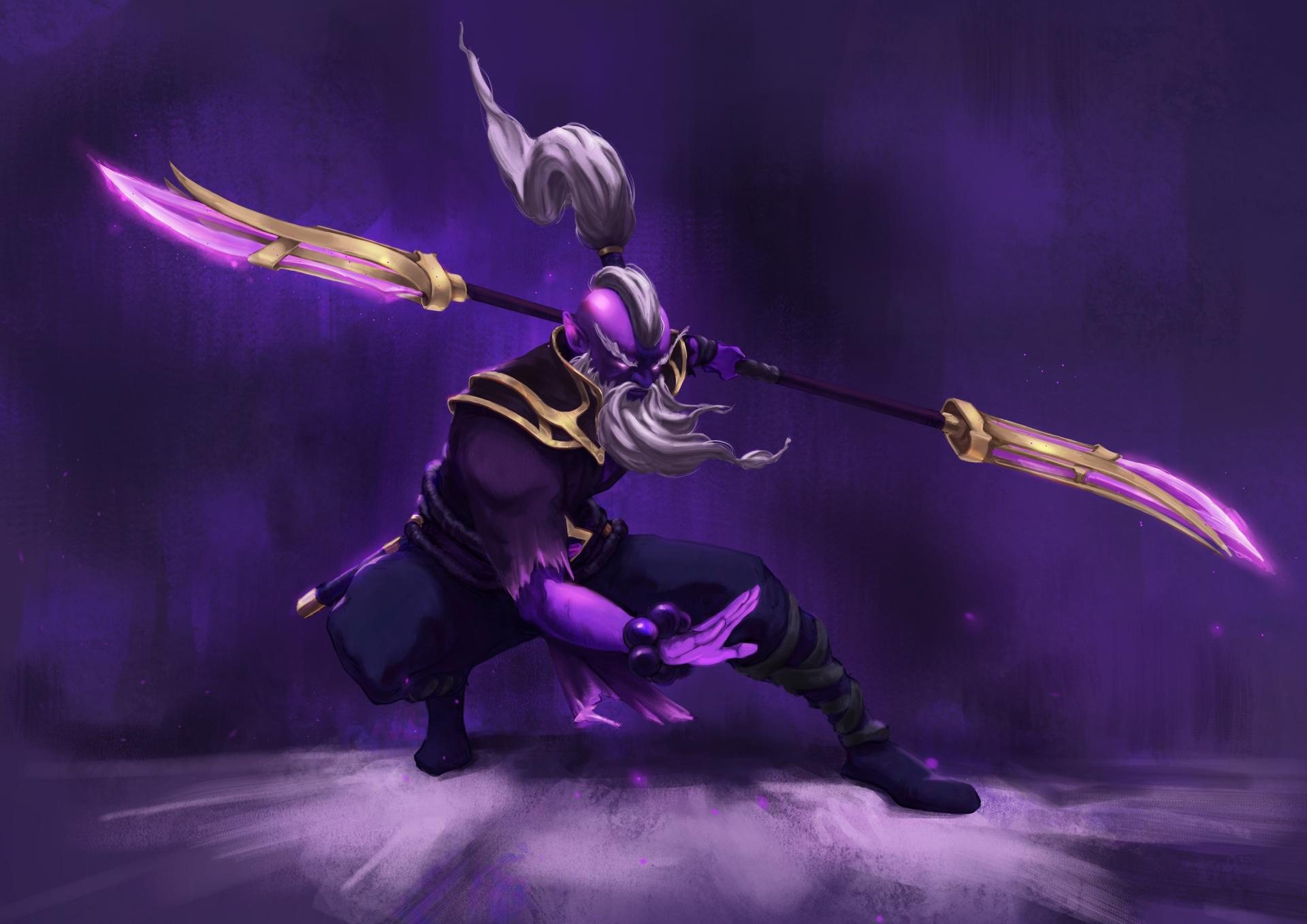 In general, your leveling priority of R>E>Q>W remains the same regardless of the position you are playing. When you level what ability in what order in the first 1-6 levels determines the biggest difference between leveling courses. What level you take your [W] and the first two skills you level are the key points of dispute. You will be taking creeps in the wave as a Pos 1/2/3. As a result, increasing your [E] level one is essential because, if you are facing a ranged champion, you will need it to secure the ranged creep, and, if you are facing a melee champion, you will need it to secure creep and give you an advantage in the early #v# clashes.You have an edge while battling in creep waves or against physical heroes because your [E] grants you absorption.

Effect: Targeted by vector. A remnant is sent by the Void Spirit to the destination. With his back to his vector, the remnant keeps watch over the area. A unit that crosses in front of the remnant is drawn in and hurt.

Effect: In order to rebuild himself, Void Spirit creates a multitude of portals while he momentarily fades into the aether. He deals damage to all around adversaries after emerging from a portal.

Effect: Void Spirit envelops himself in a defense that deflects physical harm and sends out a single devastating pulse. For each enemy hero the pulse strikes, the shield's ability to absorb damage increases.

Effect: In order to reach the desired place, Void Spirit creates a rift in the astral plane and attacks every foe in its route. A void mark is inflicted by this strike, which slows for two seconds before detonating.

Phase Boots: Make Void Spirit even more capable of fending off blows while aiding in the pursuit of his adversaries.

Bottle: Is practical for maintaining Void Spirit in the middle lane and for holding runes.

Null Talisman: Increases Void Spirit's damage potential and lowers the mana requirements for all of his abilities. It also gives him some extra qualities.

Kaya: Provides Void Spirit with greater attack and spell damage, as well as lower mana requirements to maintain his spellcasting. This can be be upgraded to Kaya and Sange, which add further status resistance to disables and improve the sustainability of his performance.

Eul's Scepter of Divinity: Is a wise choice for fighting heroes with silences that can stop you in your tracks or mobile targets. It not only offers a way to get away from these heroes, but it can also be a prelude to Aether Remnant.

Black King Bar: Is a good defensive item for him because silences and magical blasts can silence him.

Shiva's Guard: Is a useful tool for you and your group. The armor and Resonant Pulse work in concert (armor is calculated before the shield HP). Additionally, it provides excellent stats, and your strong mobility allows you to distribute the slow to every member of the opposing squad.

Boots of Travel: Gives the Void Spirit a wide-ranging presence across the map and rather fast movement.

Aghanim's Shard: Delivers more mobility and more damage because to its Dissimilate enhancements.

Orchid Malevolence: Gives you a lot of mana regeneration so you may use it to repeatedly utilize your skills on a single target while also giving you a silence and damage amplification. If you have the gold, you can simply upgrade this later to become a Bloodthorn.

Veil of Discord: Increases the area of effect spell damage dealt by Void Spirit, enabling him to take out enemy teams more quickly.

Octarine Core: Improves mana and health for sustainability. In order to maintain his health, Void Spirit might use the Cooldown Reduction.

Scythe of Vyse: Allows the usage of more abilities by the Void Spirit by granting characteristics, intellect, and mana regeneration. The active hex neutralizes a potentially harmful target and activates Dissimilate.

Bloodstone: A fantastic choice for upgrading your Kaya icon.png Kaya. It is not only efficient in terms of item slots, but it also increases spell damage and lets you spam spells more frequently.

Linken’s Sphere: Prevents Void Spirit from dying before activating Black King Bar by protecting him from immediate, single-target disables (like Scythe of Vyse).

Abyssal Blade: Is a good item because it gives you both a guaranteed stun and a damage block, both of which can be followed by a dissimilation for escape or damage. By perhaps provoking the passive bash, your Astral Step complements this item's functionality.

Maelstrom: Is a good item for pushing and farming, and it also raises your damage output when using Astral Step.

Orchid Malevolence: With the silence, entirely turn off Void Spirit.

Hood of Defiance: Will aid in lowering the burst damage of Void Spirit.

Black King Bar: With the exception of his ultimate spell, none of his spells pierce spell immunity, hence Black King Bar is a useful weapon against him.

You shouldn't worry about trading in the early game; instead, concentrate on leveling up to 6, as there is a large power surge and there aren't many heroes that can compete with you in a fight between levels 5 and 6 or even 6 and 6. Please be aware that this will differ depending on whether you are playing solo or in a duo lane, and that when fighting you must take into account the abilities of your teammates as well as the enemies. To the best of your ability, concentrate on using [E] and [Q] to farm + poak and trade damage with the enemy. Even in a melee combat, you don't have the best fighting potential, but with enough skill and gut instinct, you can fight before 6 [in a solo, it depends on your pair's power spikes and the enemy's blunders in a duo situation]. The best course of action in a conflict is to simply flee to a high point, or if you're set on trading.

When you reach level 6, you have a lot more room for both creating potential and killing potential. To enable your Pos 1/2/3 to farm and gather items so they can carry you late, you should be able to kill your lane opponents and then roam to stack camps, clear camps, clear unpushed lanes, kill unsuspecting enemy side laners, and generally just create the space needed. In the infrequent team fights that occur at this time in the game, the backline supports to the fact that you divide up the team as I mentioned before. As your post six, you have that nice mobility, and you can dive in and out [CC allowed, use your mind, not your tilt] taking kills on enemy side laners. Your combination will continue to be a version of [R] engage using [Q] or [E], depending on whether you believe you need the [Q] for the pursuit. However, keep in mind that using the [Q] after [R] allows almost 100% hit probability if you can aim, as they are slowed off of [R] after which you can attack them with AAs and use items' CD abilities.

As you get into the late game, your role changes from an early game carry who clears the lane and pushes the opposition back so you can farm with Pos 1/2/3 to a diving space carry who creates space in team fights. Then, after letting the initiators take the initiative, you would move into the backline, use your orchid to quiet the most crucial backliner, then use orchid damage to finish them off. Afterward, depending on the fight, you might [R] out or switch targets on a different backliner. If you do have euls or bkb and used them properly, you would continue to split the other team or reassemble with your team to eliminate anyone in the 4v3 or 4v4 situation, enabling you to win the battle. When you eliminate the CC/backline in a combat, your influence can be enormous. Remember that you can Eul's or orchid a powerful carry, like Orchiding a Storm Spirit or Eul'sing a blademail pos 3. As your base damage sans actives can typically burst through soft supports, you must be aware of who requires certain equipment and who you should concentrate on.