"It is not to aid the Ancients that this war is joined, but to destroy them both. This disunity must end."

Before all things began, there was an existence: a primordial consciousness, limitless and terrifying, to fulfill a profoundly unfathomable purpose. When the universe was born, this consciousness shattered and drifted into many small pieces. The two largest pieces - often called Radiant and Dire - oppose each other on two fronts, circling around and then beginning to enchant every creature to serve the war between them.

As war and catastrophe threaten this nascent universe, the will of the third fragment emerges. Naming itself Zet, this consciousness seeks to resolve discord and bring everything back to its proper unity. Disgusted at the strife of his kin, Zet gathered his strength. In the blink of an eye, it completely overpowered its brethren, merging them all into one star and hurling it into eternal darkness, making it a satellite for some unknown planet. The balance is restored, at the cost of Zet remaining only the most primitive of power. Even though he had little strength left, Zet was determined to devote all of his time and energy to the task of administering this prison. Thousands of years have passed, the warden never neglected his duties.

Life had thrived in the world below, oblivious to the dangers ensnared in the bright moon above, or Zet's struggle to contain them. The prison Zet held in captivity appeared in turmoil, the surface of the prison shook, and began to gradually crack. In the end, Zet's depleted power was unable to hold back this rebellion, and the moon broke. The ancient prisoners of the prison have escaped to sow the seeds of their conflict once again. 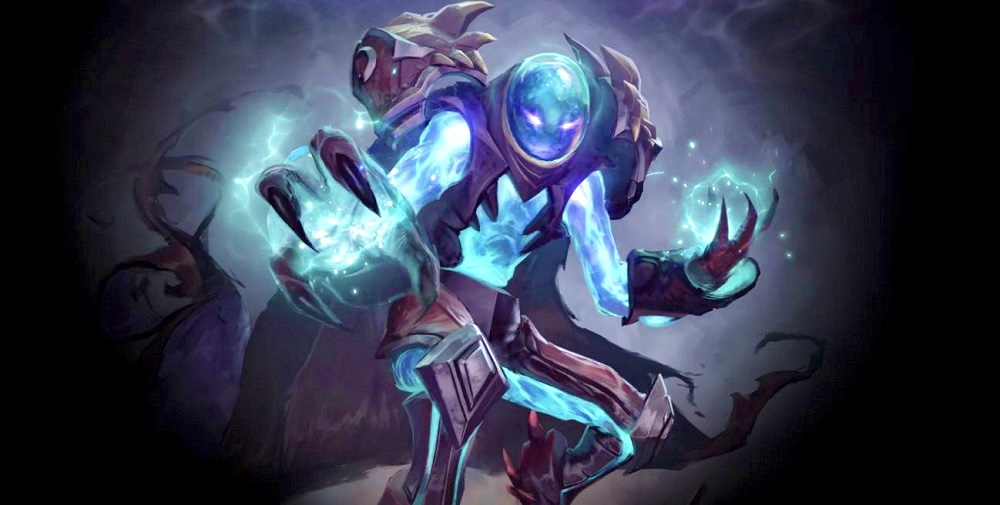 E - Spark Wraith is Zet's most versatile ability in dealing damage to enemies. That's why you should raise the max level of this skill first. Next will go to Flux to improve the ability to catch odd, single target damage. Finally, W - Magnetic Field to support teammates in big late game teamfights. In addition, the ultimate ability Tempest Double should be upgraded according to the level milestones.

Effect: Infuses a single enemy unit with whirling, volatile energy, limiting their mobility and causing damage over time. If another enemy unit is close to the target, the effect is muffled.

Effect: Creates a magnetic energy field with a circular distortion that shields allied heroes and structures within it from assaults from outside the field.

Effect: Summons a Spark Wraith, which materializes slowly and patrols a designated area until an adversary gets within range. The wraith unites with the victim after it has been identified, causing magical damage and slowing the unit.

Effect: The Arc Warden is able to make a flawless electrical copy of itself by briefly focussing its broken pieces into a single shape. Except for most consumables and equipment that drop on death, the replica can utilize all of Arc Warden's existing items and spells. The duplicate has its own cooldowns for items and abilities. When foes are slain by the Tempest Double, they get bounty money.

Boots of Speed: Boots of Speed boosts Arc Warden's sluggish mobility speed and allows him to flee from opponents.

Magic Wand: Arc Warden's health and mana are restored by the Magic Wand, allowing him to perform his abilities and avoid weapons like Hurricane Pike.

Hand of Midas: The Arc Warden farming game is accelerated by the Hand of Midas. Keep an eye on Tempest Double's cooldown to figure out when the best moments are to utilize it.

Maelstrom: Arc Warden's farming, wave clearing, and combat powers are all improved by Maelstrom, which may be upgraded to Mjollnir or Gleipnir later.

Gleipnir: Gleipnir is a good alternative with good stats and crowd management. It's great for skirmishes in the early to mid game, as well as late-game teamfights. Although the active avoids Linken's Sphere, the item's main drawback is substantially mitigated by dispels and a lack of attack speed.

Mjollnir: Mjollnir increases the attack speed of both you and your Tempest Double, as well as penalizing opponents who attack either of you.

Manta Style: Manta Style is an excellent mid-game item since its component, Yasha, is one of the most cost-effective items for agility heroes, providing Arc Warden with much-needed agility and movement speed. Some negative effects are removed by the active, and four illusions from Tempest Double and Zet can cause havoc. The Manta Style of the double and the original are separate and do not replace each other. Magnetic Field also helps illusions by making them more resistant to physical attacks and increasing their attack speed.

Hurricane Pike: With his enhanced attack range, Hurricane Pike allows Arc Warden to stay in the back and provides him with an escape that, when employed by Tempest Double, essentially doubles the distance covered.

Monkey King Bar: Monkey King Bar is very effective against evasive and well armored heroes, but less so against those with great magic resistance.

Nullifier: Arc Warden may use Nullifier to dispel and delay foes, preventing them from being shielded by protective equipment like Glimmer Cape or Force Staff. It's also impossible to overlook 80 damage and 8 armor at such a low price. Kite melee rightclickers like Sven and prevent heroes like Drow Ranger or Zeus from fleeing using this equipment.

Scythe of Vyse: Arc Warden's mana and mana regeneration are increased by Scythe of Vyse, allowing him to use abilities more freely. The Tempest Double may also employ hex, which doubles the duration of the disabling effect. When chain disabling, be cautious since the opponent may immediately employ Black King Bar.

Blink Dagger: The aggressive Arc Warden and Tempest Double can use Blink Dagger to swiftly approach enemy targets and unleash their abilities and equipment.

Shadow Blade: Arc Warden can use Shadow Blade to increase attack speed and damage, as well as invisibility, to flee or launch attacks on adversaries. It can be upgraded to Silver Edge, which applies break and suppresses both offensive and defensive passives.

Bloodthorn: With attack speed, attack damage, and True Strike, Bloodthorn increases mana regeneration and damage output. The quiet also makes it difficult for opponents to retaliate or flee. This effect may be countered by Black King Bar and other dispel items, so use caution.

Butterfly: Butterfly transforms Arc Warden into a formidable opponent. Because agility is his core trait, he gains a lot of benefits from it. Because the Tempest Double is not an illusion, it has no attack damage penalties, hence it may considerably enhance Arc Warden's overall damage output. The two destructive spells of Arc Warden deliver both magical and non-scaling damage. In the late game, a Butterfly assists him in continuing to deal damage to the enemies. The item's attack damage is also excellent for pushing and synergizes nicely with Magnetic Field.

Daedalus: Daedalus, like Butterfly, enhances your damage output greatly, as Arc Warden can consistently throw crits because to Magnetic Field's massive attack speed boost. It's worth noting that this passive doesn't function against structures.

Ethereal Blade: In the late game, Ethereal Blade can be handy, especially when dealing with attack damage. Combines effectively with the abilities of the Spark Wraith. It also grants 40 agility, so it's worth considering even if you're only looking for attack damage.

Eye of Skadi: Arc Warden's stats, HP, and Mana are all increased by the Eye of Skadi. Its freezing attack, when combined with Flux, his Tempest Double clone, and his Manta Style, makes adversaries far more difficult to escape.

Lotus Orb: Most of Arc Warden's commonly created goods are reflected back upon him by Lotus Orb.

At the beginning of the match, Arc Warden is quite weak and fragile. So the possibility of surviving in the early stages is quite low. So, after picking Arc Warden, please use the 603 gold you get to buy items that help increase / heal, better lane. In case if your Team lacks Support, you can buy more chickens or wards to support yourself and your teammates. Besides, Magic Stick is also a quite useful item for Arc Warden when dealing with opponents with many skills.

At the beginning of the Arc Warden should focus on farming.

Then, take Arc Warden in the direction of Top lane or Bot lane to avoid being ganked in this time. Focus on farming to get the earliest item. In particular, you need to pay attention to the Mini map continuously to avoid being ganked and dying unjustly. Farm for a while, you can take advantage of the long range and short cooldown time of the Spark Wraith skill to turn-creep.

By the middle of the game, you now have Ultimate and Arc Warden's stamina has also increased significantly. You can combine with teammates to gank and push towers. Stop farming and focus on organizing and coordinating with your team to achieve more results in the Mid Game period.

Work well with your teammates to Gank and push turrets.

At this point, you can spam the Spark Wraith skill continuously because Arc Warden has excess mana. Besides, Flux skill needs players to have calculation and observance to not make "errors" in combat. More importantly, during a teamfight or when your team is pushing a tower, place a Magnetic Field to increase your chances of victory.

Towards the end of the game, try to level up the remaining items. Although the strength of Arc Warden mainly depends on the skill system. But at this stage, both Spark Wraith and Flux are not as strong as before. Besides, this moment the total teamfight broke out a lot. Therefore, always use BKB to preserve your life and use Heart of Tarrasque to best support your teammates. Magnetic Field still needs to be used and placed in place to be able to increase attack speed for allies.

Besides, you should choose weak Support targets to focus them first. The power of Arc Warden can completely finish these enemies. Try to win the teamfight and go with your teammate to eat Roshan. Finally, focus on pushing straight into the enemy Foutain for a perfect endgame.