" You should be honored to bleed so that the Flayed Ones may live."

Strygwyr the Bloodseeker, Hound of the Flayed Twins, is a ritually sanctioned hunter sent down from the mist-shrouded peaks of Xhacatocatl in search of blood. The Flayed Ones require oceans of blood to keep them satiated and placated, and if the priests of the high plateaus do not appease them, their mountain empire will be depopulated. Strygwyr then goes in search of carnage. The vital energy of any blood he lets flow to the Twins immediately via the sacred markings on his weapons and armor. He has come to embody the energy of a vicious hound over the years, and in battle he is as savage as a jackal. It is said that beneath the Bloodseeker's Mask, in the rush of bloody quenching, you can sometimes see the features of the Flayers taking direct possession of their Hound. 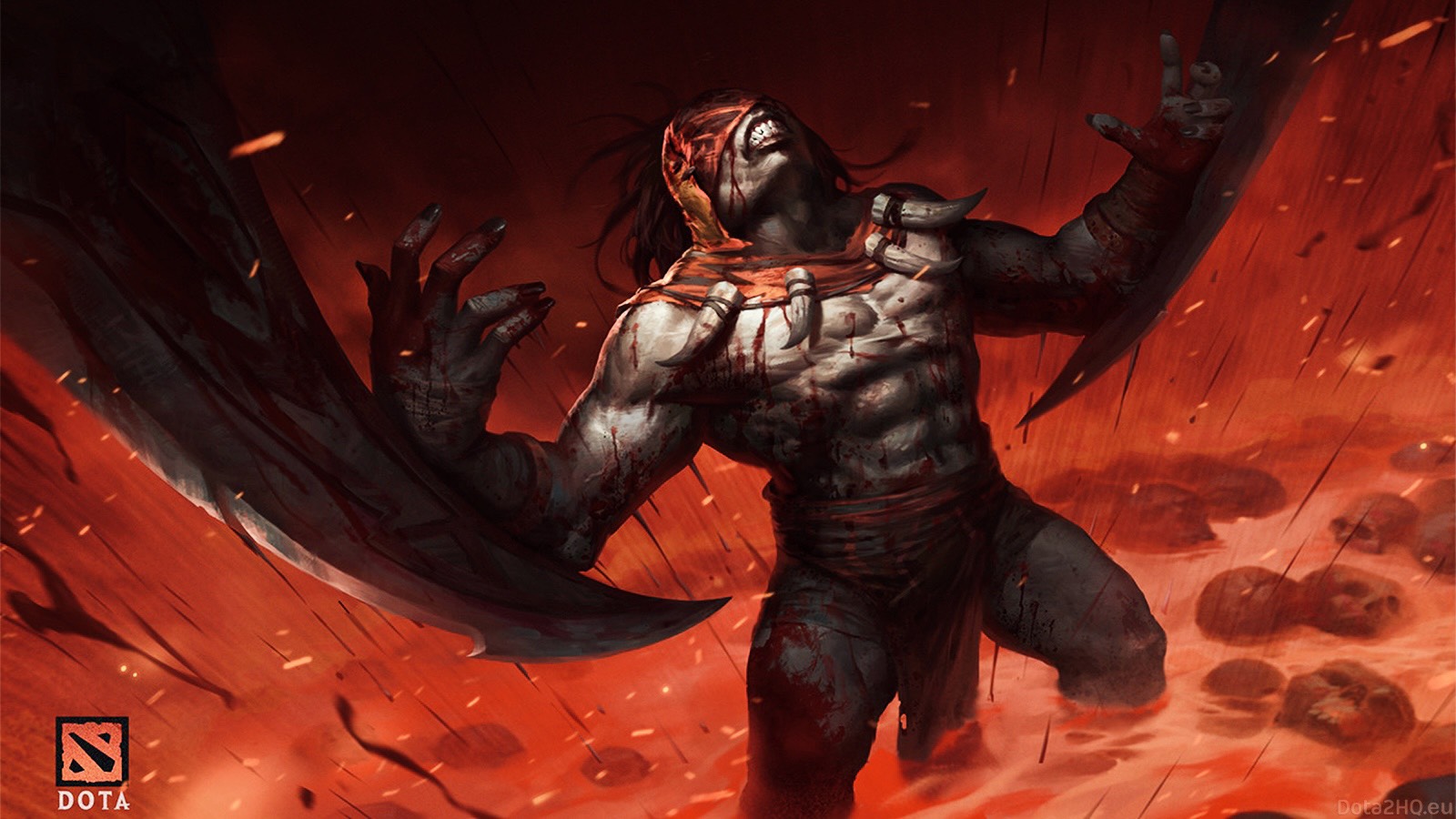 Bloodseeker should try to reach level six as soon as possible so that he can begin ganking with Rupture.Because of the damage and speed boost provided by Thirst, Bloodseeker players should always keep an eye on the enemy team's overall health regardless of where they are.Blood Rite grants ground vision in the area of effect.Bloodseeker works well with allies who have AoE damaging effects or spells with global range.Bloodrage can be used on creep-hero units such as the Brewmaster's Primal Split Brewlings, the Lone Druid's Spirit Bear, Visage's Familiars, and the Warlock's Golem.

Effect: Bloodseeker is driven into a bloodthirsty rage, causing him to attack faster and deal more spell damage at the cost of a percentage of his health per second. Allies' attack speed is reduced by half.

Effect: Bloodseeker uses sacred blood to baptize an area. The ritual ends after 2.9 seconds, causing any enemies caught in the area to take damage and become silent.

Effect: Bloodseeker is energized by his enemies' wounds, restoring some life when he kills a unit. When denying or if an ally kills a nearby enemy hero, half values are restored. When an enemy hero's health drops below 80%, they gain bonus movement speed, with the bonuses increasing as their health drops further. If the health of an enemy hero falls below 25%, he will gain vision and True Sight of that hero. Bonuses accumulate per hero. Bloodseeker's maximum movement speed is unlocked.

Effect: Bloodseeker continuously sprays his blood in the area around him, causing himself to be damaged and slowing his enemies. Thirst's healing is increased while active. It is not possible to turn off while on cooldown.

Effect: The skin of an enemy unit ruptures, dealing initial damage based on its current health. If the unit moves, it takes damage proportional to the distance traveled. Spell immunity is used to deal the damage.

Wraith Band: In the early game, it provides a cheap and efficient stat boost.

Boots of Speed: Increases the effectiveness of Thirst by increasing base move speed, and the item can be upgraded for very gold-efficient damage or stats.

Magic Wand: Provides some characteristics as well as a way to restore Bloodseeker's health and mana on demand

Power Treads: Provide increased attack speed and agility for increased damage output; when using abilities, Bloodseeker can switch to strength for survivability or intelligence for mana.

Black King Bar: Makes Bloodseeker immune to most disables and nukes, allowing him to enter teamfights with confidence.

Silver Edge: Because of Bloodseeker's natural speed and ability to break enemy passives, he can be extremely useful in ganking.

Abyssal Blade: Gives Bloodseeker a strong stun and a moderate amount of durability.

Gleipnir: Bloodrage replaces Mjollnir's attack speed boost and provides a root that can also be used to pin down fleeing foes or set up Blood Rite.

Blade Mail: During teamfights, this prevents enemies from targeting Bloodseeker.

Sabre Echo: Is sometimes used as a source of extra damage and mana early in the game, and it works well with chance-based attack modifiers like Skull Basher.

Hand of Midas: Is occasionally purchased if Bloodseeker has a strong early game or needs to match harder carries in the late game.

Radiance: Area damage allows Bloodseeker to quickly farm a large number of creeps at once, making it a valuable item when Bloodseeker is carrying. Bloodrage increases the area damage and allows him to gain the Thirst bonus from all nearby enemies.

Eul's Scepter of Divinity: Provides Bloodseeker with movement speed and mana regeneration, as well as a way to prevent enemies from teleporting away.

Dagon: Is sometimes picked up to deal high initial damage during ganks, triggering Thirst's damage and speed bonuses to give Bloodseeker an immediate advantage and finish off the target. Its damage is increased by Bloodrage.

Nullifier: Removes buffs that can prevent Bloodseeker from focusing down targets (such as Ghost Scepter).

Satanic: Allows Bloodseeker to heal quickly without relying on kills, which can be difficult in the late game.

Blade Mail: A reflection of Rupture damage When Ruptured, strength heroes with mobility skills such as Clockwerk or Centaur Warrunner can reflect a large amount of damage.

Heart of Tarrasque: Thirst's effectiveness is reduced by health regeneration.

Bloodseeker's early game is extremely powerful. It's insane how he can rupture someone and use his bloodrite to either do pure damage or have them run with rupture on. Once that combo has begun, simply bloodrage and begin hitting them. Back off and try to last hit or deny creeps so you can heal before going back in if they are killing you. Troll warlord is an excellent counter to bloodseeker. With lifesteal and fervor, he can easily kill you. If you're playing against a troll, I recommend using bloodrite before rupturing to make him move. If you want to fight him, use bloodrage, enter the room, and begin right clicking. If he returns to farming creeps after your ult expires, fight him again because his fervor stack is broken. Avoid towers and try to force him to go a certain way with bloodrite where your team might be waiting or where you might be able to get a kill easier. Most people focus on running, so when you bloodrite in front of them and have the tip of the rite on them, they just keep running, hoping to outrun it and give you free damage.

This may be a bad idea for most people, but farming during this stage of the game is a good idea for you. This includes hero kills; however, don't just run into a fight unless you know you can win because if you don't have farm as a bloodseeker, you'll be useless late game. You should have a decent farm at this point if you ganked properly and know how to last hit. If your team is in a team fight and has a chance to win or almost win, go to a lane where they aren't and farm. This may appear to be a selfish move at first, and your team may punish you for it, but they will thank you later. Believe me. Once you've established your farm, you can gank enemies who are off farming on their own. It should be about 30-35 minutes into the game at this point.

As I mentioned in the previous section, bloodseeker dies quickly if not properly farmed. One of the reasons we get radiance is that you don't want to be hit all the time or you'll be nuked. If you've been properly farmed at this point in the game, you should be playing with the team if you're winning or splitting pushing if you're losing. Bloodseeker is an excellent team fighter as well as a great pick-up hero. He has a high damage output with bloodrage, which makes him a good pusher. He can also bloodrage a siege creep, increasing its damage to the tower. As a bloodseeker, you rely on your allies to protect the map because he is a squishy hero at the start of the game. Though most people do not believe it, bloodseeker will die early in the game before obtaining any levels or items.