Dark Reef is the name of this sunken prison in the depths of the sea, where the worst of sea creatures are imprisoned for their crimes against their own kind. self. It was a prison building with walls surrounded by sharp blades, filled with dangerous Slithereen, evil, cunning Deep Ones or antisocial Meranths. In that murky labyrinth, patrolled by eels and guarded by giant sea anemones, only the most wicked can survive.

Thrown into the Dark Reef for unknown crimes, Slark has lived more than half of his life with no kin or kindness, nor can anyone trust anyone, surviving thanks to a wonderful combination of stealth abilities. ruthless, with ideas and plans kept to himself. Then, as the infamous Dark Reef Dozen prepared for their unfortunate escape, they kept their plan perfectly hidden, killing anyone who found a trace. – yet, somehow, Slark still found out, and “put” a place for himself in that scheme.

During the prison break, 10 of the 12 guys were destroyed, the other 2 were captured, escorted back to Dark Reef, executed to entertain the "prisoners". However, Slark, the thirteenth who was never known, took advantage of the chaos to hide, escaped and was never caught again.

Currently, Slark lurks among the man-eating mangroves at the southern end of Shadeshore. To this day, he is still the only one who has successfully escaped from Dark Reef. 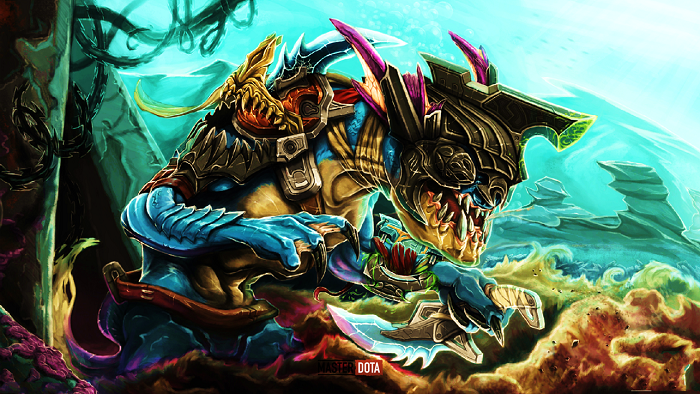 Get 1 point of Pounce (W) at first level and max it first to increase enemy retention and Slark's mobility. At early levels get 1 point Dark pact (Q) to remove buffs and Essence shift (E) to increase damage. Maximize the Dark pact (Q) secondly to deal damage and in this stage you have Ultimate and a bit more health, so you can use this skill more freely. Essence shift (E) final max at this point makes sense since you need sustained damage while stealing enemy champions' stats. Ultimate of course get the correct level.

Effect: when activating this skill, after 1.5 seconds, Slark will cancel harmful buffs on himself and deal 75/150/225/300 damage to the surroundings. Slark consumes 1/2 health equal to the damage dealt immediately upon casting.

Effect: jumps forward, if he hits the target is an enemy champion, that person will take 50/100/150/200 damage and can't move more than 1 radius at the target location. hit for a period of time.

Effect: Slark's basic attacks on an enemy champion steal 1 point each of that champion's stat, and grant him 3 agility points for himself for a certain duration.

Passive: when Slark is out of sight, he gains 30%/35%/40% Movement Speed and heals 3%/5%/7% of his maximum health per second. This passive is blocked when he attacks jungle monsters.

Active: sends Slark into a mist of darkness, rendering him invisible for 4 seconds. During this time, he can use skills, basic attacks, and equipment without being visible. This stealth state cannot be detected by any skills, anti-stealth equipment, or true turret vision.

Effect: Creates a 300 AoE cloud at the target location for 3 seconds. All allies inside the radius are hidden and affected by Shadow Dance.

Slark's goal is not to farm any creeps at this stage. Therefore, the ax chopping wood and a little bit of stats is the best choice in the laning phase. However, if you are confident in your last hit ability, you can skip Quelling Blade and add items that increase stats to increase your ability to kill opponents. It's also important to note that Slark is an extremely short-handed hero, so you'll be at a disadvantage when trading hits with long-armed heroes. You will even have to take a good beating while farming monsters, so buy a lot of regen items to stay in lane to level 6.

Slark is an early combat-oriented hero, so the Phase shoe will be the preferred choice over other boots. A little hit damage, a little armor and penetration effects will help Slark easily capture the opponent. However, if the progress of the match tends to raise turtles, then Power Treads is a better choice to go farming.

Equipment for attack effects like Orb of Venom and Blight Stone is a great complement to manual damage ganking heroes like Slark. Previously, we used to choose 1 of these 2 items in the early game, however, version 7.28 allowed both effects to be integrated with only 1 single item slot, Orb of Corrosion for only 925 Gold. . Get this gear if you have a chance to snowball your opponent.

An item that increases basic stats at the beginning of the game, in the previous meta, we often increase the agility of these 2-3 masks to make the heroes really strong. However, in version 7.28, you should only wear a single mask and focus on other important items.

Even if your team doesn't have Zeus, or Skywrath Mage, but the hero is spamming, you should still buy this magic stick. Sometimes you just need a little health to finish off the opponent first or a little mana to use the ultimate, the amount of charge stored in the Magic Stick will save you in such situations.

This is the first big item for Slark because it is quite cheap but extremely useful. Burning down the opponent's mana and the slow effect makes it easy for Slark to kill the opponent's fragile supports.

Slark needed items that were really expensive and had immediate effect. At the present time, Sange and Yasha are such an item. In the past, it would have been funny to cross-sword Slark, however, this new sword has added a new status resistance reduction, a great effect for Slark. Imagine, you just unstunned the opponent with Dark Pact, and then exited the slow effect after only a few seconds, Slark will be very "pulsed" without fear of being disabled.

If your team has too many disables and magic damage, then after you go to Diffu you can close BKB to survive a long time in the teamfight. However, it is also necessary to consider this item when choosing this item because the price of BKB is up to 4050 Gold but the number of stats provided is not really commensurate. Therefore, you should only close BKB if you feel suffocated because of being disabled or when 5 slots are full.

A philosophy when playing Slark is not to need items that increase damage, but need items to increase survivability in combat. Therefore, items for fast healing like Satanic are extremely important to Slark. Combo Shadow Dance, BKB and Satanic make slark almost immortal in all combat.

You don't need to worry about damage because the longer Slark lives, the more stats he absorbs, the more painful Slark's attacks will be. Therefore, try to live a long time in the teamfight and then go back to all 5 enemy heroes.

A very useful item, both providing a huge amount of stats and adding a slow attack effect.

Another item that is probably more favored than the Eye of Skadi in the late game is the bash hammer. This item has the ability to instantly suppress, making it easy to defeat your opponent after just a few hits. Use the Bash hammer if you feel that Slark in your hand is tough and skillful enough to live in combat.

Drum of Endurance: provides Slark with attributes to improve his lackluster growth while giving him extra movement speed and attack speed to help close the distance on foes, building the early game advantage he needs to snowball.

Diffusal Blade provides a way to slow fleeing heroes, keeping them in attack range, as well as burning mana for extra damage and suit the gain of attack speed.

Sange and Yasha allows him to chase and attack enemy heroes due to the movement speed, attack speed, and agility boost. Its bonus strength may also beef up Slark enough to survive engagements.

Black King Bar's spell immunity offers protection from disables, making him almost invulnerable while under the effect of Shadow Dance.

Malevolence helps Slark gank by silencing enemies, as well as regenerating Slark's mana for more frequent uses of Pounce and Dark Pact. This makes it useful against enemies that rely on blinks or other abilities to escape.

Moon Shard increases Slark's attack speed for Essence Shift to steal attributes quickly. As the game progresses, Slark can consume it to free an item slot and keep a permanent attack speed bonus.

Abyssal Blade locks down Slark so he cannot escape to regenerate his health.

Heaven's Halberd's disarm cannot be dispelled by Dark Pact, while the evasion may force Slark to build Monkey King Bar.

Shiva's Guard gives the holder much more physical survivability and a useful active ability which will halt Slark during Shadow Dance.

Scythe of Vyse's hex fully disables Slark, but hex can be dispelled with Dark Pact.

At this stage you need to farm and get exp to level up first. Once you've reached level 2 or level 3 or higher, having acquired a few basic items, your ability to rush into a duel has been greatly improved.

You can easily defeat a cockroach, but a certain cockroach if he is negligent without the help of his teammates (in a 1vs1 situation). And if you go offlane, you only have to hold the pole to get exp to enjoy the level, then calculate the way to farm to compensate. You need to get to lvl6 fast to get the most out of your mobility.

Now that you have the ultimate, you should go with your teammates to gank and push the tower to benefit from this job. With the ultimate you can easily hit the turret to defeat the target, with the passive coming from this skill, you sneak into a hidden corner to heal extremely bad, then turn around again.

Use Dark pact (Q) properly to solve the disadvantage buff at the right time. With skills that stun you should time them to turn on before they hit you.

Once equipped with Blink dagger/Shadow blade, killing a physiologically weak person is as easy as turning your hand with the mobility of the equipment and the Pounce (W) skill. The farming of soldiers in this stage you can take advantage of when there is no view of the enemy or they have just entered the counting board.

Shadow dance (R) is a very annoying eye detection skill that when you pass a place where there are eyes, you will lose the passive, from which you can alert your teammates to let them avoid that area or break eyes. With 1800/1800 vision, you can easily hunt at night

Slark is not a good turret push hero so it's very difficult to push odd turrets, so you should go with your teammates or if you are confident, you can hunt odd targets during this phase, especially at night, when your visibility reaches 1800/1800.

In total combat, after the initiators have unleashed all their skills, you choose the appropriate position, jump into support>nuker/carry>other category to beat and defeat them as fast as you can in 4 seconds ultimate (or you can hit first and then activate your ultimate if you already have bkb). Because Slark is in the genre of getting stronger, so no one dares to stand alone for long if they can't finish you off quickly within a few notes when you already have a lot of equipment.