Medusa did not have such a hideous figure before. She was once one of the candidates for the position of goddess of the Gorgon domain in place of her mother, along with her two sisters. However, they did not fight, but were extremely satisfied and loved each other. The beautiful life went on until one day strangers infiltrated the territory and kidnapped her two sisters.

Hence, Medusa dreamed of saving her dear sisters, going to the Gorgon temple to beg her mother to give her strength instead of eternal life. As a result, she lost her perfect face and body. But now for Medusa, those things no longer mattered. Now, strength is all she cares about.

Medusa is a ranged agility hero. She is an item-dependent carry with the capacity to take out whole teams at once while being shielded by tank-like resilience. Split Shot allows her to hit numerous targets with her attacks, considerably enhancing the damage-dealing potential of damage-dealing items. Mystic Snake gives Medusa a presence in the lane and in skirmishes, and its mana stealing ability offsets some of the cost, making it a great farming and harassing weapon. Mana Shield defends her from teamfights' initial damage, and when combined with gear, it makes killing Medusa a fatally slow process. Stone Gaze is a superb defensive mechanism against both ganks and initiations, devastating those who dare to face the Gorgon. 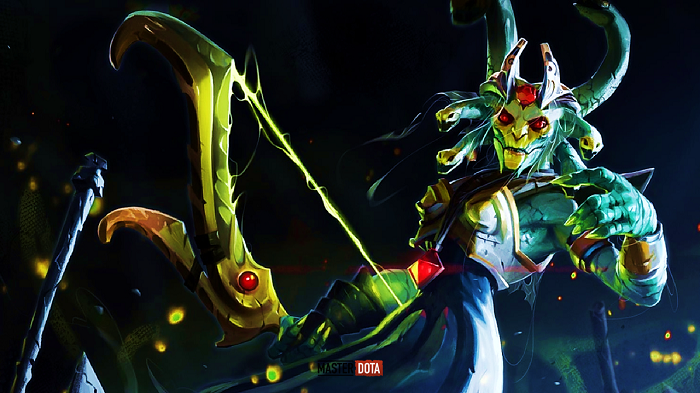 How to play Medusa Dota 2, the most important thing is that you have to upgrade skills in a certain order. First, raise the max level for Mystic Snake to minimize mana consumption, followed by Manashield to avoid being killed too early during ganks. And finally Split Shot at the remaining points and Ulti in each level.

Effect: Medusa divides her arrow into numerous shafts using her sorcery. These arrows do a fraction of the damage that her usual arrows do. Other attack effects will not be applied to the extra targets (such as critical strike).

Effect: A magical energy snake leaps from target to target, inflicting damage. It returns to Medusa after reaching its final victim to refill her mana. The snake inflicts greater damage every jump and restores 11 percent/14 percent/17 percent/20 percent mana dependent on the total mana of the targets.

Effect: In return for Medusa's mana, creates a shield that absorbs 70% of incoming damage. Increases your mana capacity.

Effect: A single-target Mystic Snake is sent back towards the enemy when Medusa is targeted by a spell. Cooldown: 12 minutes

Effect: The movement and attack speed of any opponent units gazing at Medusa will be slowed. If a unit spends more than 2 seconds staring at Medusa while Stone Gaze is active, it will turn to stone. Units that have been petrified are shocked and incur additional physical damage.

Power Treads: Medusa can use Power Treads to increase her movement speed and improve her characteristics to compensate for her limited mobility.

Wraith Band: Wraith Band boosts Medusa's qualities for a low cost, and may be picked up in bulk to fill up her inventory spaces early on.

Magic Wand: Early on on Medusa, the Magic Wand is one of the most cost-effective survival tools. Because of Mana Shield, the instantaneously restored health and mana you obtain from charges is even more effective on her.

Mask of Madness: Mask of Madness is useful for speeding up your farming and staying active in the middle game. Her Mana Shield almost cancels out the damage increase, provides her the movement and attack speed she needs for farming and team battles, and allows her to be active early on.

However, you must exercise caution when using the active ability, as the silence will prohibit you from switching Mana Shield.

Manta Style: Medusa's characteristics are bolstered all over, and Manta Style can even remove debuffs. Split Shot is also beneficial to illusions.

Eye of Skadi: The Eye of Skadi provides both killing power and survival through characteristics and mana for Mana Shield.

Drum of Endurance: On Medusa, the Drum of Endurance is a fantastically cost-effective characteristic item. It provides her with both intellect and strength, which she needs, as well as a slight mobility and attack speed that is ideal for cultivating or pushing.

Linken's Sphere: If your farm is being disturbed or you're being shut down in combat, Linken's Sphere might be prioritized. It grants good characteristics and protection against disables.

Mjollnir: To cope with summons or illusions, Mjollnir can be purchased.

Black King Bar: If you can't get Stone Gaze off because the enemy have you locked down, Black King Bar is a good option.

Bloodthorn: Bloodthorn increases your intellect and mana regeneration, making you even more tanky, as it essentially combines a Crystalys and a Monkey King Bar into one slot.

Moon Shard: Moon Shard increases attack speed even more, making it a useful item in the late game because you may use it to spare a slot for lower benefits.

Scythe of Vyse: Scythe of Vyse provides an additional disable, attributes, and mana restoration, all of which may aid Mana Shield.

Aghanim's Scepter: Mystic Snake may petrify any foes he strikes with Aghanim's Scepter, giving the ability a hard-disable utility that enables for more strategic use. It also adds a significant amount of health and mana to Medusa, as well as providing qualities in all sectors.

Divine Rapier: Medusa's strongest damage item is the Divine Rapier. Even with Mask of Madness, she's tanky enough that the chances of her dropping this are incredibly minimal, and it'll let you take on the opposition team with Split Shot. However, if you're up against heroes that can burn through your Mana Shield, it can be too dangerous.

Satanic: When constructing Divine Rapier, Satanic should be chosen. Due to Divine Rapier's exceptionally high damage, Satanic passive lifesteal and active skill become useful in terms of self-healing, reducing the possibilities of losing the Rapier.

You should focus all of your effort on farming from the beginning of the game until you obtain at least two luxury goods. The goal is to start collecting as many last hits as possible right away, so assess your competition and choose the lane that will provide you with the most farm. Don't worry if you have to change lanes; that's perfectly normal. Anyone who opposes you on this is a moron. You want to go where the farm is, plain and simple.

You should have more than enough lane domination with solid assistance from your team if you go with Stats and Mystic Snake with every level early game. In terms of products, you want to make quick judgments; what will you require? In what sequence should they be done? What is the most beneficial to you right now? These are the kinds of thoughts you should be thinking, although they're mostly confined to goods like the Ring of Aquila, Power Treads, and Magic Wand. While you can stray a little, the ultimate result should remain the same, albeit in some cases you may want to bypass Ring of Aquila (which is why I did not suggest it in her build at the top).

Everything changes now that you're in the Middle Game. You'll now be able to farm more gold and hug more towers! On a more serious note, you'll continue to play conservatively and make the most of what you have. Stick to farming instead than pushing out when it's unsafe. When the lane is hazardous or pushed too far, ask your teammates to stack neutral camps for you so you can swiftly farm them with Split Shot. Keep an eye out for missing heroes; any deaths will knock you back significantly and may even lose you the game at this stage.

Manta Style and/or Linken's Sphere are the items you're looking at in the midst of the game. They're both excellent stuff on her, so choose which will be more effective against your opponents and buy it. Most of the time, I choose Manta Style because the damage output is simply too high to ignore.

Since you're still winding down, you shouldn't worry about being aggressive. Because she is so item dependent, Medusa takes the longest to pick up compared to the other carriers. Do not become smug when you begin to see how difficult it is to kill you and your damage output increases considerably. Keep in mind that without Petrifying Gaze and at least one luxury item, you will most likely be outperformed by the enemy carry at this point.

You should always have a Teleportation Scroll on you since you should always be near the farm. When you get two creep waves of gold in your pocket for the fraction spent on the Teleportation Scroll, it's not simply protecting. While you'll be mostly concerned with farming, you have the ability to be a deadly hero in a defensive position. It's also crucial to ensure that the game can last at least 40 minutes, therefore bring the Teleportation Scroll. You also have no true escape option, so waiting for their stuns and tanking damage with Mana Shield might help you finish the channeling period.

The moment has finally arrived. You should just be a monster at this point. In this section of the guide, I don't believe any explanation is required. Simply keep an eye out for what objects you should be constructing in order to enhance your current game's performance. When analyzing what you require, a short checklist should always be reviewed from top to bottom; the greater the number, the higher the priority.