For centuries, Black Arachnia the Broodmother lurked among lava caves deep beneath the smoldering crater Mount Pyrotheos, devoted to caring for and nurturing millions of baby spiders, keeping them alive. safe before they were large enough to be sent out to hunt in the world above.

Unexpectedly, one day, the greedy prime minister Ptholopthales suddenly appeared, and began to build his private Ziggurat building on the slopes of a long-dead volcano. Because he knew, even if someone dared to dream of his fortune, he would not be able to survive if he dared to cross the path of death haunted by spiders.

Definitely, Ptholopthales' calculations had a big impact on Broodmother's life. After a few centuries of peace, Black Arachnia suddenly discovers that there are uninvited guests who are constantly disturbing her life - armed thieves, daring horsemen "brave and unscrupulous" ”, or even young noblemen – their taste is very delicious, and also has a great influence on the “innocent children'' she is taking care of.

Tired of the break-ins, Broodmother "visited" Ptholopthales, and after he showed no intention of cooperating at all, she "gently" used spider silk to tie him up, then brought him home. “gift” for the “newborns”_what a special birthday party.

Unfortunately, the disappearance of the owner of that Ziggurat court merely made the curious even more daring. Then, after a newborn "baby" was stomped to death by a reckless adventurer, Black Arachnia finally exploded (her string of reason was finally broken). Broodmother crawled out of the nest, headed for the world above, vowing to wipe out all who could become a danger to her children. She would kill the last Hero if necessary, and would not stop until she could ensure that her precious "babys" could be safe once more in the "nursery." mine. 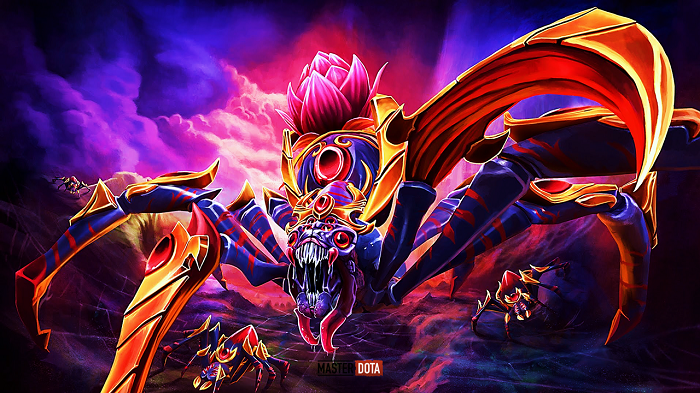 The way to build skills above is applied by a lot of gosu, and I also find it quite reasonable: you need at least 4 cobwebs to stay in lane, push turrets, so 1level Spin web (W) in the stage head is not enough. With 30% attack rate in the early stages, this is not a small number, not to mention the skill Incapacitating Bite (E) gives a little bit of a slow, so 1 point is not superfluous at early levels, ultimate you can get at level 7 and the right level at next levels. Of course, Broodmother's trademark skill Spawn Spiderlings (Q) is maxed first.

Effect: Fires a parasitic egg sac on the specified target, dealing 75/150/225/300 damage, if the target is killed by this skill or shortly afterwards, the monsters Baby spiders will emerge from the target's corpse and fight under the Broodmother's control.

Effect: Fires a parasitic egg sac on the specified target, dealing 75/150/225/300 damage, if the target is killed by this skill or shortly afterwards, the monsters Baby spiders will emerge from the target's corpse and fight under the Broodmother's control.

Effect: Slows the specified target, dealing damage and giving them a chance to miss. Deals bonus magic damage when attacking this target.

Effect: cripple enemy units, cause attacks to slow and give the affected unit a chance to miss its attacks.

Effect: Broodmother creates a 900 width invisible web line. Enemy Heroes that cross the web line will make it visible and become rooted, visible in fog and receive 100dps for 4 seconds, after which the line is destroyed. Broodmother's team is notified in the Minimap whenever someone trips in a Web line. Multiple Heroes can trip on the same line until it's destroyed.

She can use Spawn Spiderlings more often without running out of mana, which lets her to annoy adversaries, take final attacks, and collect Spiderlings.

Necronomicon: This is the item that is required at this point, with its aura providing several advantages to pets. You should update this book to level 2, then upload it depending on the scenario. Level 3 is an option, or you can stay at level 2 until the end of the middle game.

Orchid malevolence: Anyone who dares to approach your spider's web will be muzzled, and the mana index for utilizing the skill will be ensured.

Assault Cuirass: Broodmother and her spiders' attack speed and armor are increased by Assault Cuirass, but neighboring towers' armor is reduced. A great gadget that enhances Broodmother's abilities.

Butterfly works nicely with Broodmother's passive, making it even more difficult for adversaries to strike her and increasing Broodmother's carry potential.

Nullifier is beneficial against things like Ghost Scepter Ghost Scepter, as well as preventing foes from breaking Orchid Malevolence's quiet.

Bloodthorn replenishes Broodmother's mana and enhances her damage output. Its active ability silences the victim while also granting True Strike to all enemies that are afflicted.

Speedy Boots If the adversary has numerous slows, combining her boots with her move speed boost will negate their impact.

Hand of Midas: Broodmother's leveling is accelerated by the Hand of Midas, allowing her to attain her level 20 and 25 talents faster.

Mask of Madness: Mask of Madness provides cost-effective attack speed, which may be combined with Insatiable Hunger's extra damage for a low-cost rise in attack output.

Desolator: Broodmother's pushing and killing speed is increased because to Desolator's high damage and armor reduction.

Diffusal Blade: Diffusal Blade, in addition to its good stats, may be picked up early for an extra slow on foes.

Pipe of Insight: Broodmother can farm so quickly that picking up a pipe for the team can let her and her spiders survive massive magic bursts that would normally kill them.

Radiance: During team engagements, Radiance does area damage and increases the probability of becoming blinded. Broodmother can apply the burn to most foes since she is frequently in the midst of a team battle.

Many Spiderlings are easily wiped off by Radiance, Battle Fury, Maelstrom Maelstrom, and Mjollnir.

Rod of Atos intervene to prevent Broodmother from fleeing.

At the beginning of the game you need to level up and farm some items first. With Spin web (W), you can easily eat minions, poke enemies as well as have good healing ability. When you have reached lvl4 or higher and have a Soul ring, you are free to create spiders and poke enemies with Spawn Spiderlings (Q) or finish the target if possible. You need to be flexible in sticking to the ground by dropping silk near the forest to calculate the way back if there is danger, or necessary, to switch lanes in time.

At this stage, you can still stick to a lane to split push or participate in a few small teamfights, but with the skill set, ganking and participating in small combat is really not suitable. In case you get ganked by the council, try not to take damage from champions, run into the woods to hide in or use the Town portal scroll to go home. With single targets that don't have to be your nemesis, just hit it boldly with no twists.

When you have enough equipment and maxed out your skills, you can already join the teamfight, or continue to split push like in the beginning and middle of the game, but with the pusher build style above, it is possible. Your odd push is still the best. In the case of total combat, except for the tanker, you can hit anyone else (prefer the cockroaches) because of your ultimate skill + equipment, you don't mind any game.