The monks atop Turstarkuri turned a blind eye as wave after wave of blood and fire swept through the mountain kingdoms. Living ascetic and practical, they sink into philosophies, away from the dust as well as the disturbances of magic and gods. And then the legion of Dead God came, bringing with him the belief of jihad, the war that wiped out all faiths, leaving only one, the malicious nihilism of the Unliving Lord. Coming from a land of blood and fire in thousands of years of war, they tore the souls and bodies of the defeated, and used them against the Turstarkuri priests. Yet they still meditate as before, immersed in the thought that these are just things sent by the devil to disturb their minds.

As a result, the monastery only lasted for a week or two. And they die where they are meditating. Only one person survived, a young man, who came to the monastery in search of wisdom, but had not yet been approved by the monastery. He watched in horror as the monks he had served were massacred, and then resurrected as part of that army. He dropped everything, fled to a safe place, taking only the scrolls of the Turstarkuri teachings, he swore he would not only erase Dead God's magic but also put an end to the two 'ghosts' art' completely. 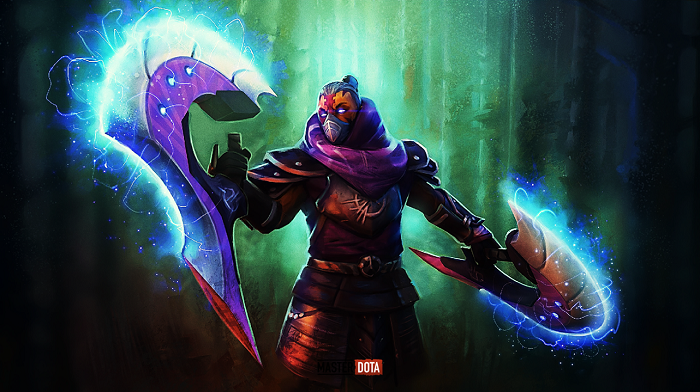 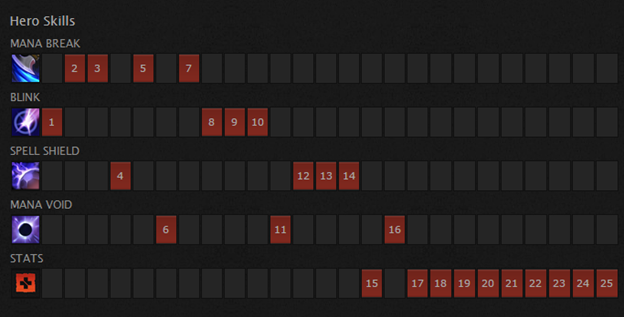 In fact, there are many ways to improve skills and each method has advantages and disadvantages. Simply put, if you have an advantage when laning, you should raise the line to harass the opponent. But if you have a difficult lane, you should focus on farming (max blink + mana shield first) to increase survivability and farm more. The order of raising skills for Anti-Mage is significantly different in each game. Here are the skills that I find most effective.

Note that the order of raising skills for Anti-Mage is different in each game, especially the way to raise skills to farm. When you start to stop farming to keep lane or jungle (when there is battlefury) and start to split push or join teamfight, you should max mana break.

Effect: This skill will work against a lot of heroes, especially those with low mana pool but relying too much on it like Naix. You can use it to harass your opponent in the early game. In the late game, this skill helps you disable a hero quickly by burning all its mana, especially with the Illusions of the manta (3x the ability to burn mana).

Can only work with Vladimir or the Lifesteal Auras.

Effect: One of the most maneuverable skills in Dota that has turned AM into an unstoppable hard carry late game. Blink helps AM to escape, chase the enemy as well as farm as quickly as possible, especially when the Battlefury item is up.

If you use blink too much to the maximum usable distance then you will only teleport 4/5 of the maximum distance.

Blink can be used to avoid some other skills (ultimate of Sniper, Homing Missile of Tinker, ...)

Being a pretty useful passive allows AM to be able to tank magic nuke heroes like Lina, Lion, etc., but can't protect AM from other stun or slow-causing skills. This skill stacks with other magic resistance items.

Effect: Blinks an illusion at the target adversary or area for 7 seconds, attacking them. Blink's Cast Range is used. Illusion is uncontrollable, does 75% damage, and receives 200% damage. Counterspell is also cast on the Fragment illusion when it is cast. There are three charges on it.

Mana Void can completely destroy heroes with large mana pools, especially after AM has burned their mana with Mana Break. As a hardcarry you can use this skill to ks (killsteal) but don't waste it because sometimes this skill deals a large amount of AOE damage and can be useful for some other heroes. Comes with ministun, Mana Void can be used to stop town portal or some channeling skills

Deals a ministun for a short duration.

Damage is dealt based on your hero selection and that hero's mana but will affect a certain AOE.

Quelling Blade: Quelling Blade helps Anti-Mage get final hits by dealing extra damage to creeps. It stacks with Battle Fury and builds into it.

Magic Stick: If the adversary is casting a lot of spells, picking up a Magic Stick is an excellent choice because it offers Anti-Mage a lot of regeneration in case of an emergency.

Ring of Health: In the early game, the Ring of Life gives Anti-Mage with fair health restoration, and as the game progresses, it evolves into Battle Fury.

Power Treads: Anti-Mage may use Power Treads to increase attack speed and swap characteristics, keeping him alive with strength or sustaining his powers with intelligence.

Battle Fury: Anti-Mage gains HP and mana regeneration from Battle Fury, as well as a cleave that lets Anti-Mage to farm and push quicker.

Manta Style: Anti-Mage benefits greatly from Manta Style's characteristics. Mana Break benefits illusions by dramatically increasing Anti-Mage damage, pushing potential, and increasing mana-burning skills. Anti-Mage can also dodge and erase spell effects thanks to the split, which can be handy in combat or when fleeing.

Abyssal Blade: Anti-Mage gains a damage increase, the ability to smash foes while attacking, and a guaranteed stun that bypasses spell immunity with Abyssal Blade. It also increases Anti-health Mage's pool by a tiny amount of strength and health.

Butterfly: As Anti-Mage is an agility hero, Butterfly provides a significant damage increase, as well as armor, evasion, and extra attack speed on top of the attack speed received from the agility on the item.

Black King Bar: Anti-Mage may strike without worrying about an opponent disables because to Black King Bar's spell immunity.

Eye of Skadi: The Eye of Skadi bestows a variety of benefits, the most notable of which being an increase in mana pool, allowing Manta Style and Mana Void to be utilized more frequently.

It may also be used as a replacement for Abyssal Blade if its slowness is sufficient to cripple specific enemy heroes (Ex: if particular enemy heroes lack escapes and rely on keeping a good position or high movement speed).

Laning is the most difficult aspect of an Anti-Mage game. While Anti-Mage starts with a respectable level of strength, his strength increase is pathetic at +1.2. As a result, you will have significantly less HP than many other heroes in the game. As a result, Anti-Mage will need a Stout Shield for some damage protection, as well as a tango and healing salve to maintain his HP at maximum. It's also a good idea to pick up three Iron Branches to boost your health. Later in the game, the three branches may simply be upgraded into a Magic Wand.

Pick up a Magic Wand with your three branches if you're having a lot of difficulties in lane. It will provide you a lot of burst HP and protect you from heroes that spam their abilities ( Zeus, Phantom Assassin). Pick up a Poor Man's Shield or even a Vanguard if you're being harassed even more. While purchasing these survival equipment may slow down your progress, it will be worth it if they save your life even once.

If you're okay with the amount of harassment in your lane, go ahead and get Boots of Speed or Ring of Health. Others choose to obtain Boots first, whereas I prefer to get a Ring of Health first. It's all up to you. By the time you finish the early laning phase, you should have a Ring of Health and Power Treads.

During laning, attempt to strike the enemy as much as possible. Of course, in a safe manner. Each hit corresponds to mana burnt, which will benefit characters like Clinkz and Drow Ranger who have low mana pools and are mana-draining.

You should begin working on your Battlefury now that the early laning phase is over. A Battlefury is an important item for Anti-Mage since it allows you a lot of farming with Blink. An Anti-Mage equipped with Blink and a Battlefury may flash-farm the jungle in 45 seconds and then repeat the process indefinitely. You can also simply push your creep lane with a Battlefury because you can kill creeps quickly. Blinking far ahead of your creeps and clearing away a whole opposition creep wave is a typical approach, allowing the creeps to push on their own.

Anti-Mage should depart the lane for the jungle after a Battlefury. You are still quite weak at this time and should avoid teamfights. Feel free to Blink in and utilize Mana Void to steal kills if your team is obliterating the enemy team. Any kills directed towards you as an Anti-Mage, rather than a Pudge or Bloodseeker, will benefit the squad.

A Manta Style is a great match for Anti-Mage because your illusions will also benefit from Mana Break. Because all three illusions hit for 64 mana burn, Anti-Mage will be able to burn 192 mana per hit with a Manta. The illusions will additionally receive a bonus of 38 damage, resulting in enormous damage being inflicted. A Manta will also provide much-needed movement speed, as well as large quantities of extra Agility, owing to Yasha. It also allows you to Manta-dodge or utilize the Manta Style a fraction of a second before a missile impacts. Because utilizing the Manta makes you invulnerable for 0.1 seconds, this will stop the harm. Any negative debuffs, such as Desolator's Corruption, will be removed when using the Manta.

Feel free to join teamfights once you've obtained your Manta. You should be able to solo most heroes with illusions due to their enormous Mana Break and damage. Of course, use caution and avoid initiating! You're still squishy, and if you begin with Blink, you'll almost certainly get bursted down. Allow the other team or another hero to take the lead. Always keep your Blink for when you need to get away. Everything might be ruined by a single death.

You have various possibilities to work for after you get your Manta. A Vladimir's Offering is the first and most obvious option. It stacks with Mana Break as an aura, and the added armor aura is highly appealing. Vlads, on the other hand, do not scale well and become nearly worthless in the late game. Personally, I never go to Vlads.

Another choice is to choose a Heart. A heart will provide you with an astonishing 1060 health points and remarkable regeneration. A Heart will increase your regeneration to roughly 62 on an Anti-Mage, and that figure will continue to rise. Anti-Mage can and should tank unlimited creep and tower damage if equipped with a Heart. Of course, under hero fire, the rapid regeneration does not operate, but the additional 1060 HP is still a valuable tool in a fight.

After a Heart, a Butterfly can be pursued. A Butterfly will grant you tremendous levels of attack speed, damage, agility, and evasion. Great? If the other team has a Monkey King Bar, it's a no-brainer. The finest characteristic of a Butterfly is its evasion, which is entirely disabled by an MKB. A Butterfly is still worthwhile with an MKB. It will deal tremendous amounts of DPS and compel the opponent side to use an MKB.

A Skull Basher is another choice after Heart. For 1.4 seconds, it will deliver a 25% chance of bash. It also increases damage and strength, and it may be upgraded to an Abyssal Blade later. I'd grab a Skull Basher first because it's significantly less expensive and yet highly effective. If at all feasible, obtain both.

You may simply go about the map killing random towers and heores at this stage. It may not be practical, but it is certainly entertaining.