+50 Bash of the Deep Damage

Slardar is a Slithereen, one of the Deep Ones (respected members), guardian of the city deep in the ocean and rich with treasures buried there. In the depths of this place, the Slithereen Guard carries a source of light - which attracts the other creatures that accompany the Slardar through secret treasures. Underwater thieves are often attracted to that ghostly image until the terrible truth behind approaches and then, the unfortunate thief will never return.

Going to shallow water despite the pain that comes from the light on the ground, enduring to scout, to make sure there is no conspiracy against the deep ocean, and sometimes he pursues relentlessly to get things back. stolen treasure. Because Slardar had spent his life here, under the great responsibility of the sea, in a way Slardar or the Slithereen Guard alone were powerful beings. 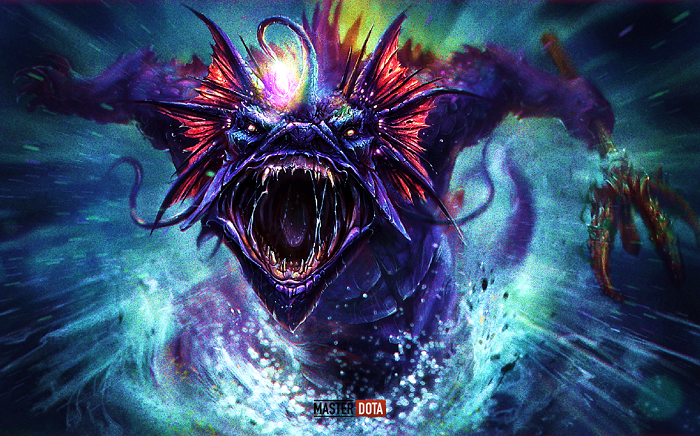 Maximize Slithereen crush (W) to damage and stun the enemy, hold them to finish, wait for teammates or use it to escape. After lifting, you continue to upgrade Sprint (Q) to increase Slardar's mobility (after all, take 15% more damage at all levels, then maximize it to hate it) Bash (E) is maximized finally, and now Slardar also has quite a bit of attack speed, so raising it at this time is very suitable, or you can get 1 point in the early levels for luck and farming to grab the elbow by bashing (ie. is to press hit the target and then just press S to watch me, when you hear the *pop* sound, release, you have successfully hacked bash). Ultimate get the correct level.

Effect: Increases his movement speed for a duration and the ability to walk through minions, monsters, and champions, but he also takes 1 extra damage if attacked.

Bash of the Deep

Effect: weakens the enemy's armor against physical damage and reveals the target with a 400 vision radius

Boots of Speed: For every hero, Boots of Speed are essential early on. In Slardar's instance, it considerably increases the power of Guardian Sprint, allowing him to catch up to fleeing adversaries or elude pursuers more quickly.

Helm of Iron Will

Helm of Iron Will: The increased protection makes you incredibly survivable against physical damage in the early game, while the Helm of Iron Will gives strong sustain in lane. It instantly transforms into a Mordiggian Armlet.

The Magic Wand gives Slardar a cheap attribute increase as well as a rapid burst heal. It may be used to withstand the last piece of damage or to deliver a last spell in a teamfight.

Power Treads: Slardar can get more strength for HP and basic damage, or more intellect to use more of his abilities, thanks to Power Treads' attribute swapping.

Blink Dagger: In Slardar's hands, Blink Dagger is highly effective since he can immediately reach into range to perform Slithereen Crush. It should be treated as a priority in all situations and completed as quickly as feasible.

Lotus Orb: Slardar may use Lotus Orb to counter opposing target spells, letting him to cripple enemy supports or dissuade them from concentrating on him. It also grants tankiness armor, as well as HP and mana replenishment to allow him to travel freely.

Shadow Blade: Shadow Blade is a powerful starting item that boosts Slardar's physical DPS while also allowing him to hunt for opponents covertly. When Slardar uses Guardian Sprint and Shadow Walk together, he may travel at maximum speed while invisible and deliver backstab damage when attacking out of invisibility.

Echo Sabre: On a ganking Slardar, Echo Sabre may be a highly useful equipment. On a hero that desires both, the extra health and mana/regen are nice. Bash of the Deep's increased attack speed and quick attack passive work nicely together.

Desolator: The Desolator is a reasonably inexpensive equipment that increases additional damage. Its attack modifier reduces enemy armor and works in tandem with Corrosive Haze to allow Slardar to shred foes with his assaults.

Crimson Guard: Crimson Guard improves Slardar's tankiness and allows him to withstand most kinds of physical damage by increasing his health, damage block, and armor. For a limited period, he may offer damage block and armor to all surrounding teammates, enhancing their durability as well as his own.

At the beginning of the game, if there is coordination from your teammates, you can get kills very easily thanks to the strong hand damage and Slithereen crush (W) skill that stuns for 1.6 seconds and slows for 2 seconds after that, just need to replenish A control skill related to movement speed or damage is more than enough. You can go solo lane, dual lane (except for tri lane or solo mid out). At this point you need to farm to have the necessary amount of items for later ganking in the mid game. Sprint (Q) is a very good ability to chase or run away, but you should time it to turn it on or you will receive a decent amount of damage from the enemy.

Once you have the basic equipment, and especially after having the Blink dagger, you are a very mobile and annoying ganker when it comes to surprise as well as the ability to kill / help knock down enemies quickly. quickly with his skill set (Medallion of courage combined with Amplify damage minus 16 enemy armor in this phase, whoever can stand it). When ganking, you should pay attention to use Sprint (Q) reasonably, time it so that you have just reached the gank location, this skill will limit the amount of damage you receive, or use it when the opponent has finished ganking the tail cup running away no longer has the ability to resist. The Town portal scroll is an item that should always be in your gear during this phase.

You are one of those heroes who won't be bored with anyone if you know how to properly build, with the tendency to build armor like above, you can subtract a maximum of 20+6+7+5 = 38 armor, an extremely terrible number, moreover you also have stun skills so you won't be afraid of any solo duel (for those who cause misses, go to monkey king bar to overcome), but Slardar is an initiator is not really as powerful as other pure initiators so he is more or less dependent on his teammates. With teammates pressing the field, controlling Roshan as well as pushing down the tower is essential in this stage to lead to victory.