"I wonder what awaits me at the end of everything…"

For Aeons ago, even before the appearance of languages, there was a clan that thrived which is called the druidic Bear Clan. The members of this clan were wise and put their concentration on figuring out the natural order. Among them, Sylla, the wisest, had been chosen as a representative of his skin to carry on the Seed by the arch forces of nature.

When the trust fulfilled his heart and soul, he could sense the youth and vitality was running in his vein. His mind was flooded with vast amounts of knowledge. He realized that he could project his own will into real life and if he could focus a little bit longer and more intensely, he could transform himself. Unfortunately, the rumor about the word of the Seed and its miraculous power had been whispered to other peoples and as a result, the war happened upon the Bear Clan. Sylla had nowhere to go as all of his familial home was burned into ashes, therefore he carried on this burden and ran into the wild places.

Time flies, the stories and myths about Bear Clan, remarkable civilizations that emerged and collapsed in Bear Clan’s wake as well as Sylla and the Seed were forgotten. Sylla has been waiting for the next word from his immortals for thousands of years, waiting for the end of the war to the realms. He has been waiting in the isolated place til everything comes to the end and the answers for his sacred commitment is revealed. While waiting he also puts himself in readiness to fight and crush whatever would dare to challenge his purpose. 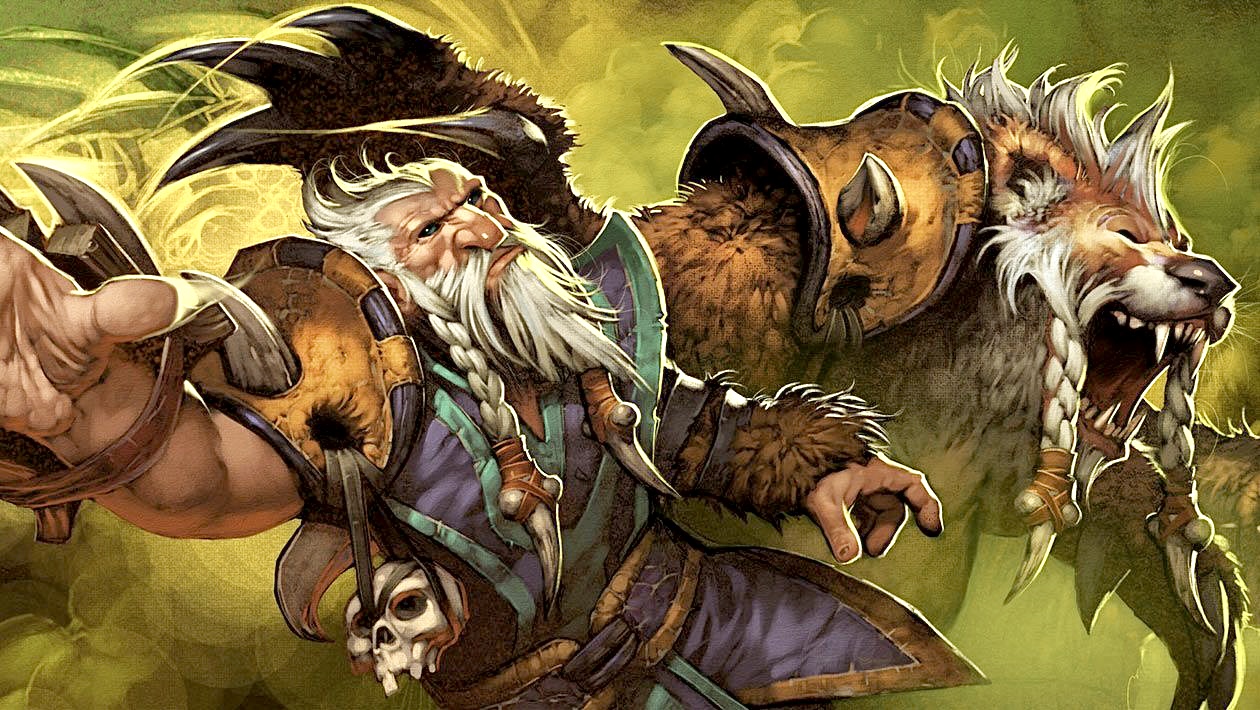 Base Attack time: 1.6 seconds per attack;

In this build I will focus on guiding you how to play Lone Druid as a hard carry. The first ability I recommend you max out is Summon Spirit Bear as It is Lone Druid main source of damage and durable in the early game which is used to tank the creeps in the lane and jungle.

The second ability to max out is Spirit Link. The reason why you should max out this ability is because of the endurance  it grants which can help you and your Spirit Bear survive better in fights. Besides, the lifesteal this ability grants also helps Lone Druid harass the enemies. Furthermore, this ability can help to proc Entangling Claw in teamfight or combat. And Savage Roar is our last priority.

Effect: Lone Druid swings his hand and summons a powerful Spirit Bear behind him which can be armed with items. The Spirit Bear will be unable to attack if it is 1100 distance away from Lone Druid. When Spirit Bear dies, Lone Druid will lose 20% of his health. Attributes do not affect Spirit Bear. Spirit Bear has its own abilities.

Whenever Lone Druid levels up, Spirit Bear will gain 5 attack damage and 90 health.

When casting Summon Spirit Bear for the first time, the Spirit Bear is literally summoned and the following casts will heal or revive Spirit Bear.

The unit killing the Spirit Bear will receive backlash damage which is pure damage.

Spirit Bear is prevented from summoning if it receives damage from a player in the past  seconds regardless of the damage value.

Most of the items can be used by Spirit Bear except Observer and Sentry Wards. It can consume runes.

Spirit Bear can not attack, cast spells or use items if it is 1100 range away from Lone Druid.

When Spirit Bear attacks enemy units, it triggers lifesteal and Lone Druid is benefited from it, not Spirit Bear.

The leveling up visual effect is only visible when the Spirit Bear is within 1500 range of Lone Druid.

Only Spirit Bear and its owner can be benefited from the Spirit Link.

Effect: Both Lone Druid and Spirit Bear generate an unpleasant noise around them which force the nearby enemies to head back to their fountain in fear . In addition, the affected target’s movement speed is increased by 20%.

Savage Roar is cast by Lone Druid and Spirit Bear at the same time regardless of who made the order.

The enemies within the active range will be feared which forces them head back to their fountain and prevents them from acting.

Only units controlled by players will be affected.

Have the same cooldown duration with Spirit Bear’s Savage Roar

With upgrades from Aghanim’s Shard, both Lone Druid and the Spirit Bear take advantage of the basic dispel when Savage Roar is upon cast.

True Form (No Target, Self)

Effect: Lone Druid summons a shining circle around him which morphs him into a ranging bear. While in the bear form, he trades his attack range for the resistance as well as the upgrades for Entangling Roots and Demolish.

Lone Druid will be disabled and immobile when True Form is upon cast and it can not be disrupted.

Lone Druid will be transformed into a melee hero temporarily with 225 attack range.

The health bonus that Lone Druid receives during True Form is not considered as a heal.

While in the form of the bear, Lone Druid is granted Demolish and Entangling Claws which is in the same level with Spirit Bear’s abilities:

If Lone Druid dies during True Form, He is still in the form of the bear after respawning.

Changes the model and voice of Lone Druid.

Healing Slave: instantly restores a great amount of health so Lone Druid can spend less time at the fountain.

Tango: keeps Lone Druid in lane longer by regenerating his health within a specific period.

Phase Boots: is a great combination with Spirit Link due to the movement speed and attack damage it grants.

Magic Wand: grants bonus stats as well as a reliable source of restore health and mana.

Hurricane Pike: grants Lone Druid the attack range that he can deal damage from a long distance on both enemies and towers. Besides, Hurricane Thrust can help Lone Druid run away or put himself in a great position.

Mjollnir: grants a great amount of damage which allows Lone Druid to push the lane or farm quickly.

Tranquil Boots: grants a significant amount of movement speed which allows Lone Druid to keep up with Spirit Bear. Besides, it also grants the health regeneration to keep Lone Druid’s health in the sustain state.

Mask of Madness: increases the damage output by granting attack speed and damage. However, using Berserk must be prudent as it provides a huge amount of attack speed and movement speed but in the trade of armor.

Solar Crest: the armor and attack speed granted by this item make Spirit Bear become tankier. Besides , it also makes the gank or siege have a higher chance to succeed due to the increase in the effectiveness of Entangling Claws and Demolish.

Boots of Travel: reduces the cooldown of Town Portal Scroll which allows him to teleport around the map easier.

Aghanim’s Scepter: frees Spirit Bear from Lone Druid which means it can be a split push in one lane and Lone Druid in the other lanes.

Black King Bar: The immunity granted from BKB can prevent Lone Druid from being rooted, stunned or other disables by enemy heroes which means he can chase the enemy easily and deal damage without any disruption.

Desolator: increases the damage output by granting attack damage as well as armor reduction, including buildings.

Heaven Halberg: Heaven’s Halberd’s great damage output can kill Lone Druid and his Bear in a nick of time.

Ghost Scepter: turns the target into ethereal which helps the owner avoid damage from Lone Druid and his bear.

Like other carry heroes in the early game, farming is always Lone Druid’s priority. With the help from the Spirit Bear, Lone Druid can clear the creep quickly and push the lane faster which allows him to farm the neutral creeps in the jungle . If you are dueling with a mobility hero in your lane,you should order the Bear to attack and trigger Entangling Claws which allow you  to deal more damage on the enemy and secure the kill. With the heal getting from the Spirit Link, you can stay in the lane longer to farm the creeps. Keep in mind that you need to farm to get your power accelebrate rather than trading skills.

With some items and maximized Summon Spirit Bear, you can start to roam to other lanes to secure the kill. You can farm the creep wave on behalf of your teammate but remember to consider it carefully as you don’t want your teammate to be useless later. Only roaming when you already clear the creep waves in your lane, execute the opponent in the lane or have an advantage by destroying the tower. To optimize the efficiency, getting back to your lane right after the gank is a must. Of course don’t forget to control the runes while roaming as they are useful resources so that you can spend more time on the lane instead of the fountain.

Your objectives in the late game are quite the same with the mid game but this time you and your team might play around the keys objectives like Roshan and towers. Your mission in the late game is to find a great position to deal as much damage as possible. You can use Spirit Bear as an initiator in the place where your team doesn't have the vision or go split push. Depending on the rival  damage, you should consider various items to purchase that can help you survive longer in the team fight and deal more damage.