"All these fancy knights and scary monsters. Pff! What do they got that I ain't got? Nothing, that's what."

Life is all about who you know and what you can find, in my opinion. Just getting by in the Riftshadow Ruins can be challenging, let alone finding food. Therefore, you must be resourceful, economize, and be aware of your strengths. You need a way to catch the weak and avoid the strong since some of the creatures up there can kill you. The ruins do, however, contain history, and some people place a high value on history. There once stood a palace where all of these sinister rituals were performed. nasty stuff They would split your soul into pieces and shatter a crystal if you made it through the ritual unscathed. But they produced fantastic art! statues and the like. I'll tell you something: occasionally, you run across some of those ancient carvings. Sell a bunch of those in the city, then buy enough food for a few weeks. If you're really lucky, you might come across a Riftshadow crystal. Start by asking around and getting it appraised. There is always some crazy person looking for this kind of thing that someone knows. Sell it to a Magus the following time one is in town if all else fails. They adore that material. However, whatever you do, handle those crystals with caution. One going off on you wouldn't be good. It hurts a lot. 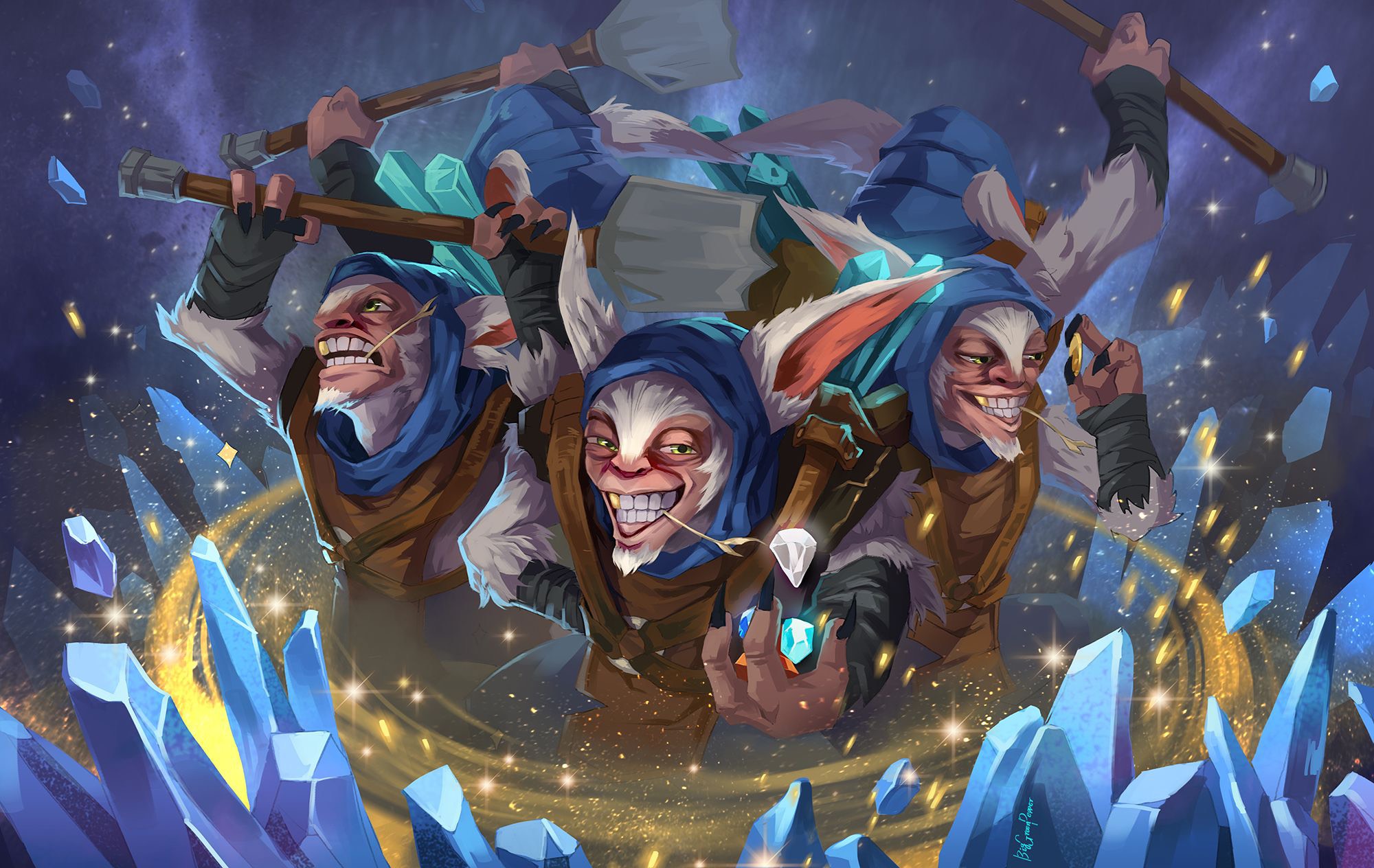 The skill build is self-expanding: as soon as possible, get your ulti and two maximum Poof. The only decision to be made is whether to choose Earthbind and Geostrike 1-1 at lower levels or to only receive one of these at a higher level (and max it after Poof). While maxing Geostrike might help a little with jungling, we can't disable anyone who isn't right in front of you without a level 4 Bind. Additionally, ganking power outweighs jungling speed (we will clear camps with Poof anyway).

Effect: Tosses a net at the target point, entangling all hostile units nearby.

Effect: A Meepo can teleport to another Meepo or to itself after channeling for 1.5 seconds, dealing damage in both the destination and the departure locations.

Effect: Each attack causes the enemy to lose health, after which all other Meepos are healed by that same amount.

Effect: Channels for 0.75 seconds while digging for 4 seconds, dispelling Meepo and rendering him defenseless and untargetable for that time. over that time, restores 60% of his maximum health. cannot be rooted and cast.

Effect: Meepo can summon a flawed, semi-autonomous copy of himself that shares his experience, traits, and skills and can accumulate gold and experience along with him. The only weapons the clones can use, though, are the boots that Meepo himself wears. They all perish if one of the clones perishes. Divided We Stand increases Magic Resistance for all Meepos.

Boots of Speed: In the early game, increase Meepo's mobility to get around the jungle and lanes.

Wraith Band: Gives all of Meepos' qualities, especially agility, for a low cost.

Bracer: Is a stat item that can be used instead of the Wraith Band when Meepo and his clones prefer durability to damage.

Bottle: Gives sustenance and keeps runes for useful times. To refill your bottle, you can always Poof to the fountain and back.

Town Portal Scroll: Meepo has a strong global presence when combined with Poof because he can disperse his clones across the map and Poof them to one another as necessary.

Power Treads: Give all Meepos attack speed and attributes, increasing Meepo's ability to deal damage and switching attributes as necessary to give his clones more health, mana, or damage.

Diffusal Blade: Gives all Meepos a sizable bonus to their agility, but Manabreak is excluded. To make netting much simpler to complete, combine Earthbind and the active Inhibit.

Blink Dagger: Is a potent initiation item that significantly increases Meepo's lethality and mobility. Meepo can cast Poof offensively to deal nuke damage and jump himself and his clones on top of an enemy by combining the Blink with a Poof from every clone.

Boots of Travel: Considering that every clone has its own cooldown, combines incredibly well with Poof to give Meepo tremendous global mobility.

Scythe of Vyse: The active gives Meepo an instant hard-disable to use against targets who are too slippery to catch with Earthbind, and provides attributes that benefit all Meepos.

Dragon Lance: Gives Meepo and his clones strength and agility so they can tank up and deal more damage.

Eye of Skadi: Increases the damage, attack speed, health, and mana of each Meepo clone while allowing the primary Meepo to slow enemies on contact.

Heart of Tarrasque: When purchased on Meepo, the item's strength attribute benefits all of Meepo's clones, greatly enhancing their ability to survive. As a result, Meepo can fight for a lot longer because each clone is much more durable.

Aghanim's Scepter: Meepo and each of his clones receive additional attributes and a new saving skill that, when used properly, increases their combat effectiveness and enables them to avoid nukes and disables.

Manta Style: Gives all Meepo clones attributes, especially Agility. The illusions will gain from Divided We Stand's attribute sharing and can be used as extra damage, decoys, or Poof targets.

Black King Bar: Can shield a hero from Earthbind and Poof.

Scythe of Vyse: Can prevent a lone Meepo from making their escape with Poof.

Manta Style: Can remove Earthbind from yourself or your allies.

In order to prevent any ganks, head off with your carry after purchasing your starting items and prepare to use ensnare. If used properly, a 2 second aoe disable can frequently stop ganks. Although pulling the easy camp when your lane pushes past the side shop helps you get your early tranquil boots, you really don't need much cs to be effective. If it is safe to do so, make sure you are sitting the runes every two minutes. Until you reach level 3, you can only keep your lane alive and pull waves to earn a few cs.

Once you reach level 3, use a smoke to gank with your primary Meepo. Just sit in the trees ready to ensnare if the enemy is pushing into your offlane tower because they will probably be diving your offlane hero. It should be possible for your offlane to take the lead in their lane thanks to the tower damage, your creep wave, and the damage you and your ally deal to them. If at all possible, make sure to grab bounty runes in between ganks, and if they ever cross the river, gank them in the middle.

Although you can't defend cliffs as a melee hero, advise the other support to buy sentries instead of upgrading the courier for your team. Additionally, always have teleport scrolls on hand because you want to try to be everywhere at once.

Start buying your cheap items, but don't stay in your lane for too long if you're not there to kill someone; otherwise, you'll just be gaining experience, which could be detrimental. Take advantage of a lane that opens up because an ally is returning to base or heading into the jungle, but leave one Meepo roaming.

With level 4 poofs, you have a ton of kill potential once you reach level 10. You ought to be either still roaming between lanes or jungling with two Meepos so you can buy your mek.

You can now play in three lanes simultaneously, allowing you to respond to any aggression or potential dives from the opposing teams. For your team to gain more gold, it is a good idea to stack with at least one Meepo. You can stack with more than one Meepo at once, but you will need to practice Control Shift commands to time it properly.

If your team can use a force staff and needs assistance positioning, go for it. However, if your team needs a follow-up initiative from heroes like "Enigma" that can set up a team fight, get a blink dagger instead. More frequently, blink is a much better but more difficult to find item.

When the enemy supports are still levels behind you and don't have their mid-game core items, you will be at your strongest. Once you have your mek, make sure to push with your team and look for teamfights. Playing a support Meepo won't cause you to level up quickly, but once midgame is over, you'll start to have a big level advantage.

At this point, you serve as your team's living aura. You should have everything your team requires. Make sure you are farming in three different locations while you wait for teamfights to occur. At this point, you can easily transition into a carry because you can catch up with Meepo very quickly. Drums, Mek, Vlads, Scythe, etc. will also need some sustain for themselves.

When the enemy is on your side of the map, farm in various locations while hiding in the trees. One of the great things about this hero is that he respawns very quickly so if you die but your enemy team hasn't advanced past the river, your team should be able to defend uphill. Blink poof comboing with 4 or 5 Meepo's can almost instantly kill any agility or int hero late game.

Choose Boots of Travel for your team if the match will involve split pushing. You can frequently win the game if you teamwipe the opposition and push a lane to their T3 if you have this item.