Kaldr, the Ancient Apparition, is a projection that transcends time. He was born from the extreme cold of the infinite void, has seen the whole universe being born, and is waiting for the moment when it will die. Kaldr was, Kaldr is, and Kaldr always will be. so…all that we realize, or see how mighty he is, is really just a fading sigh of the only true, of the eternal Kaldr .

There are many people who believe that, with the metamorphosis and decay of the universe, Kaldr's power and glory will become stronger and stronger – that the Ancient Apparition will become more and more full of life and become more powerful. near eternity. Kaldr's frost can freeze all things, his projection will create a flash of terrible glare beyond vision. He was long beyond the reach of an Apparition.

“My spirit may be locked in ice, but my rage still burns.” 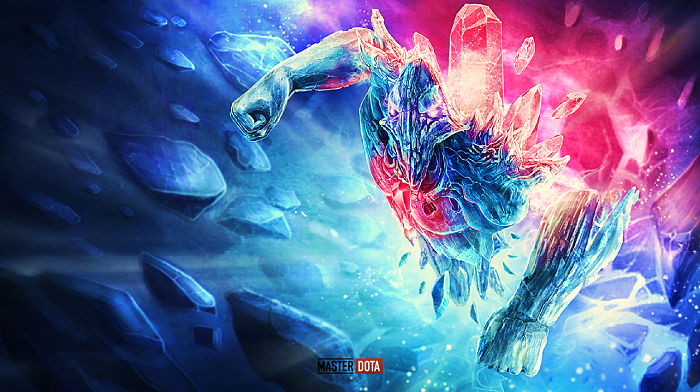 Raise Cold Feet (Q) at the first and maximum levels to take damage and lock the enemy, making it easy for you and your teammates to earn lives while roaming, ganking when your teammates can gain 1 skill some control like slow or stun.

If it's a support lane, you can get Chilling touch (E) first if that hero is suitable (like PA, Ursa, Riki for example). Maximize Cold Feet (Q) first for damage and duration. Depending on the next situation, you can max out the 2nd Ice vortex (W) or Chilling touch (E). Ultimate get the correct level.

Effect: cools the target down, dealing 37.5/50/62.5/75 damage per second. If the enemy doesn't run far away from the location where this skill was cast, they will be frozen.

Effect: creates an icy vortex at the specified location, enemies that step on this area will have their movement speed and magic resistance reduced.

Effect: Casts on allied champions (including yourself) an icy curse, reducing the attack speed of affected units but in return their attacks deal bonus damage (inactive) on piers and structures

Effect: throw an icy mark in the specified direction, activate this skill 1 more time to stop the mark, and as soon as the mark stops, AA will throw an ice ball at that location for 2 seconds . If an enemy champion has less than 10%/11%/12% of their maximum health for the duration of the effect, they will be instantly killed. The farther the mark flies, the bigger the explosion. Enemy units that are dashed by the orb take damage over time.

Note: every second the mark flies it will increase by 50 explosion radius, up to a maximum of 1000. Since the orb's flight time is 2 seconds to the target location, casting this ability at long range will be beneficial. superior in flight speed and explosive radius. There is a small trick here is that if when shooting the orb that AA tries to increase the distance between him and the mark, when he shoots the ice ball, it will explode with a larger radius.

Effect: The ice blast is released, exploding at the tracer's present location.

Urn of Shadows: Urn of Shadows provides various general benefits as well as high mana regeneration. It has the power to make ganking simpler while also healing teammates.

Magic Wand: The Magic Wand aids in the maintenance of both your health and mana.

Force Staff: The Force Staff is a very handy tool that may be used as a pursuit item or as an escape method. It can also be utilized to assist teammates.

Glimmer Cape: Ancient Apparition and allies can use the Glimmer Cape to gain magic resistance and invisibility, allowing them to flee or initiate without being detected.

Hand of Midas: When Ancient Apparition has an above-average early game, Hand of Midas might be an excellent item pick, providing him with a constant stream of money and experience.

Mekansm: Mekansm is a fantastic utility item that will make it much more difficult to kill you and your squad. Use its ability to heal you and nearby allied heroes for a small amount of mana while boosting everyone. Guardian Greaves can be improved later.

Ghost Scepter: Ancient Apparition is resistant to physical assaults thanks to the Ghost Scepter, allowing him to survive when enemy carriers are closing in on him.

Rod of Atos: Ancient Apparition's health pool is depleted, and his mana is depleted. Rod of Atos provides a considerable amount of overall stats, padding out his anemic health pool and augmenting his mana. Cold Feet, Ice Vortex, and Ice Blast all work nicely with its root.

Spirit Vessel: Spirit Vessel is an excellent upgrade to Urn of Shadows, and its percentage-based damage complements Ice Blast wonderfully.

Ancient Apparition is a pretty bad roaming hero without the support of teammates, so the ability to make lane support will be quite high. If you meet long-armed allies, you can buff Chilling touch (E) enthusiastically to poke the enemy's blood.

Using Cold Feet (Q) when there is support from an ally or when the enemy is chasing you or an allied champion, you can trigger them to freeze (and sometimes even die backwards). Ice vortex (W) is an extremely annoying slow skill, but it is very mana-consuming, so when you do not have an abundant amount of mana, you should not use it wastefully.

This is the extremely frequent roam + gank phase when your team's gankers already have enough levels and basic equipment for ganking, and create space for your carry team to farm to the maximum, or go to that lane to help it push lane, counter gank if the enemy targets your carry team.

The way you use Ice blast (R) to be most effective is to throw it from your base, then use the Town portal scroll to expand the position you just threw and join the fight. In teamfights or ganks, place Ice vortex (W) to squeeze the corner as well as reduce the opponent's magic resistance. Cold feet (Q) is a skill to trigger if you are being chased or combined with another control ability from an ally to freeze the target.

This stage you go with your teammates, fully ward, use Smoke of Deceit to gank single targets or start a teamfight by surprise, creating conditions to proceed to destroy the opponent's Ancient or push 1 lane, force the opponent to deflect turret or have to fight.

Before entering the teamfight you can't corner the opponent by placing Ice vortex (W) which reduces their movement speed and magic resistance if your team has heroes that poke the enemy with ranged skills. You choose the correct time to launch Ice blast (R) to be able to hit the most enemy heroes to block their healing, Chilling touch (E) buff increases damage to allies. Cold feet (Q) are used to block the opponent's initiator when they jump into your team's formation (don't use it on targets with bkb). You can also launch Ice blast (R) at long range to reach the largest area and then teleport up with your teammates or use it to defy towers and push creeps.