“The Dragon Slyrak sleeps within this armor, and the knight within the Dragon waits. Beware you do not wake them both.”

After many years on a pilgrimage to the legendary land of Eldwum, Davion, the dragon slayer, suddenly discovers he is facing a disappointment: Slyrak, the terrorist Dragon that scared everyone in the past. Now old and weak, its wings torn, its few remaining scales rotten, its teeth decaying, and the flames it breathes are no longer feared. How much more than a wet match? Feeling no honor in slaying such a decaying Dragon, the young knight prepared to turn around and leave his old rival to die in peace. However, at that moment, a voice suddenly entered his mind, and Slyrak begged the knight to let him die honorably in battle.

The knight agreed, and immediately found his mercy had brought him a priceless gift: As he plunged his blade into Slyrak's chest, the Old Dragon also pierced his talons. It got into his throat. When their bloodlines merged into one, Slyrak also infused him with her strength, giving him all the strength and wisdom accumulated over the centuries.

After the death of the dragon, fate tied their destinies together, and since then, the Dragon Knight was born. An ancient force had slumbered in Davion's body, and would awaken whenever he needed it or whenever the Dragon needed the knight. 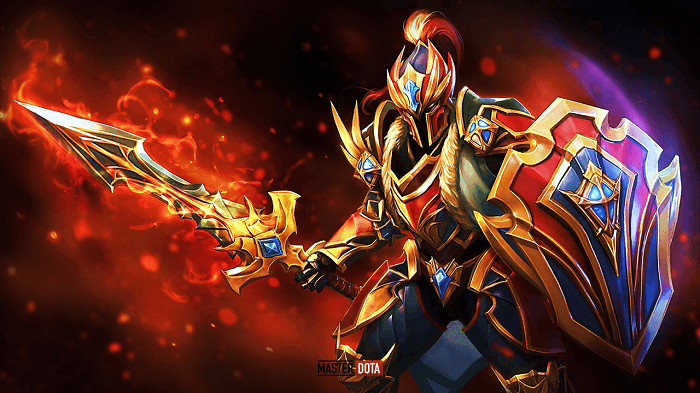 This is the most common way to build for DK, maxing out Breathe fire (Q) first because this is DK's main farming + main damage ability in the early game with not too long cooldown and range. The effect is very wide, followed by Dragon blood (E) increasing the ability to stay, and finally Dragon tail (W). Ultimate get the correct level

So with end fire radius and 650 range, DK can deal damage for 900 range

Effect: For 10 seconds, ignites a 450 AoE area, causing 65 damage per second to opponents in it for 2.0 seconds. It lasts for ten seconds. When melee, the cast range is lowered.

Effect: transforms into a ferocious dragon, gaining more attack range and enhancing some of DK's abilities

Boots of Speed: Because of the early speed increase they provide, Speed Boots are required.

Bracer: In the early game, Bracer gives a considerable amount of strength, durability, and general tankiness.

Magic Stick: Magic Stick may assist mitigate the damage caused by spells while also providing a burst of HP and Mana to help win early clashes.

Soul Ring: The Soul Ring is an important item for Dragon Knight since it allows him to farm with Breathe Fire all the time. Dragon Blood's health restoration compensates for the health loss.

Black King Bar: In most games, having a Black King Bar is essential to avoid being handicapped. You become more resilient and able to get into the fight with less chance of dying thanks to the increased survivability, damage, and spell immunity.

Blink Dagger: Blink Dagger has a lot of mobility and initiating potential, which Dragon Knight lacks a lot of.

Shadow Blade: Shadow Blade provides excellent mobility, making it suitable for situations in which Dragon Knight has to begin or gank the other team. The stealth lets you use your stun to begin, and the additional damage from stealth is also beneficial. Silver Edge can be upgraded later to break passive powers.

Magic Wand: The Magic Wand is a natural improvement to the Magic Stick, as it provides a bigger potential burst of health and mana.

Assault Cuirass: Assault Cuirass grants you and your allies increased attack speed and armor. It also gives foes a debuff, making them simpler to kill. If your team has a lot of attackers, this is a useful item to have.

Sange and Yasha: Sange and Yasha provide you a small number of qualities, like increased mobility and attack speed, increased health regeneration and lifesteal, and status resistance.

Manta Style: The perks of Elder Dragon Form and the passive Dragon Blood are fully used by Manta Style illusions. It boosts your attack and mobility speed significantly.

Aghanim's Scepter: Aghanim's Scepter increases the level of your ultimate, allowing you to transform into a black dragon. It also gives you health, mana, and a few useful stats. Later on, upgrade to Aghanim's Blessing to free up a slot.

Aghanim's Shard: Aghanim's Shard grants the "Fireball" ability, which is useful for pushing and increases AoE damage in team battles.

Satanic: Dragon Knight's durability is greatly increased by Satanic, which offers a huge strength boost as well as damage and lifesteal.

Heart of Tarrasque: Heart of Tarrasque gives you a significant HP boost and the ability to gain health more rapidly through a passive ability. It also gives you strength, which improves his attack damage and works well with Dragon Blood.

Eye of Skadi: The Eye of Skadi, like your level 3 Dragon Form's Frost Breath, gives a slow that pierces spell immunity. Cold Attack paired with Frost Breath drastically decreases an adversary's damage output and makes it difficult for opposing heroes to flee a fight after Dragon Knight has struck them.

Moon Shard: When your team is well ahead, Moon Shard might be considered a last-resort luxury.

Overwhelming Blink: Overwhelming Blink is a natural upgrade for Blink Dagger that provides a considerable deal of power while also decreasing foes' attack and movement speed when you blink near them.

Radiance Due: Radiance Due to the AoE DoT, significantly enhances DPS in team battles and can also raise farming potential.

With low mana and poor mobility, DK can't play aggressive in the early stages before having equipment to improve this (Blink dagger, Shadow blade). Just hold the soldier farm tower to enjoy the level and then calculate.

Breathe fire (Q) is a very annoying minion farming and health tool, when you have a Soul ring you can discharge it much more freely. Dragon tail (W) although stuns for a long time, it is quite sid with a short range without dragon transformation, but if the enemy is careless, you can slam your shield into its face and beat it, finishing it with Breathe fire (Q ) if. When you reach lvl 6, you can push very hard by transforming into a turret-eroding dragon.

This is the time when you should balance farming and ganking with your teammates, it is best to farm Blink dagger or Shadow blade with your teammates to organize ganks in your lane or push towers. You can start the fight by rushing to capture a single target with Dragon tail (W) for your teammates to attack, you are very good thanks to Breathe fire (Q), but look at the situation Don't give up your life, carry your team without a network, it's too late. Town portal scroll is a necessary equipment for you during this period until late game.

You can play the role of initiator in this phase by ironing directly into the enemy squad, catching dangerous skills, cornering the enemy to create opportunities for allies to attack, but you also have to know when to choose when to attack. drawn, because your ability to withstand magic damage is quite poor. You have the extremely annoying control skill level 3 dragon when you can maintain that ability so easily through shots, not to mention the amount of damage it does to the enemy squad. DK's def +push ability is also quite good thanks to his ability to deal wide area damage and cool down for not too long. In teamfights, you target low health targets before or stop the enemy initiator, performing your tanking abilities as well as burst dmg. DK is a strong hero, quite easy to play, but also a bit bored with its gameplay.