Refraction Can Be Cast While Disabled

“ Where the Hidden Ones send me, I go without question. I do not even question why I question not."

The Templar Assassin Lanaya found her calling through a line of inquisitive inquiry. She spent her early years meticulously studying the laws of nature because she had a scientific bent. She looked into grimoires of magic and alchemy, recreated experiments using burned pieces of the Violet Archives, and memorized observations made by the Keen recordkeepers. Her innate quietness and secrecy were only strengthened by the challenge of obtaining these items. She might have gained a reputation as a thief-scholar among the guilds if she had been less reserved. Instead, her research took her to much less obvious places. Instead of discovering the universe's mysteries, she used her cunning abilities to open a door that was hidden in nature itself: the entrance to the most Hidden Temple. Whatever mysteries the intelligences that awaited her beyond that portal proved to be expecting her, and whatever answers they held out to Lanaya should she continue in their service, were far less than the mysteries they revealed in the moment of their discovery. She vowed to keep the mysteries secret, but more importantly, by helping the Hidden Temple, she sates her insatiable appetite for knowledge. With every enemy she vanquishes, a little bit more of the mystery is exposed in their eyes. 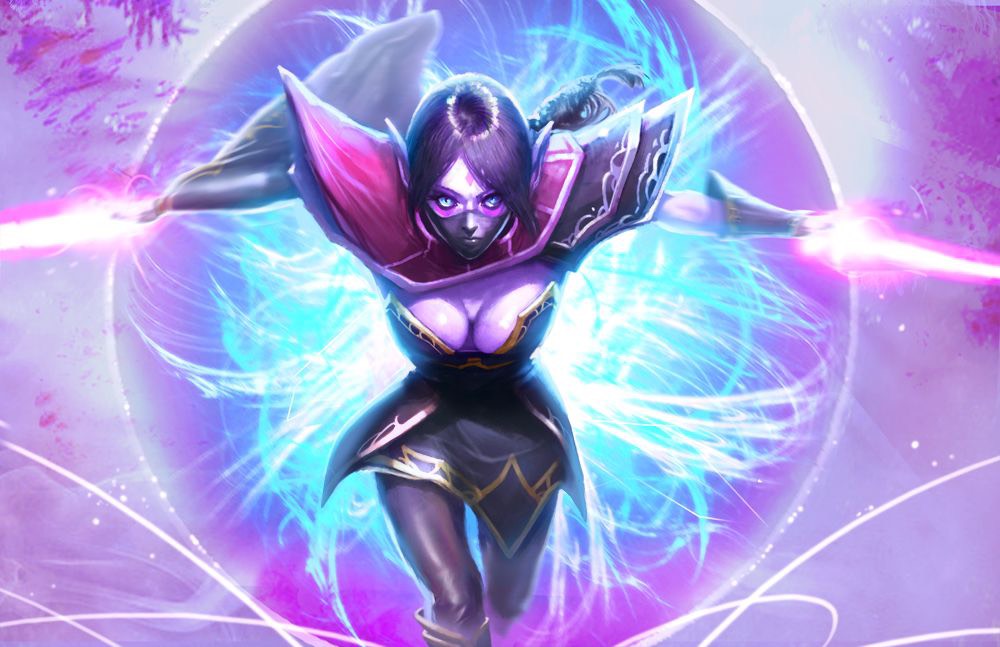 Even though we value your Blink Dagger-Meld combo highly, we'll max Refraction first for survival reasons. Early on, 2 levels of Meld are sufficient to completely destroy your opponents (-4 armor is no joke), but later on, you want to ensure that you can deal more than one devastating strike after blinking right in front of your adversary and, most importantly, survive incoming attacks. One of the few heroes, the Templar Assassin, can attempt a tower dive without becoming tanky, and this build aims to make the most of your Refraction.Moving on to the Psi Blades, you won't need the extra range because you'll blink rather than pursue on foot, so you should perfect this ability last.

Effect: The Templar Assassin develops extreme stealth, avoiding harm and gaining an increase to her damage. There are only a few instances of both the avoidance and damage effects.

Effect: As long as she doesn't move, Templar Assassin hides and turns invisible. When an enemy is struck while Meld is invisible, Lanaya deals additional damage to them and lowers their armor for 12 seconds.

Effect: The psi blades of the Templar Assassin rip through the attacked unit, splitting and harming the enemies right behind it while gaining an extended attack range. The spill damage is diminished by a certain percentage for every unit it damages.

Effect: After 1.5 seconds of channeling, the Templar Assassin is able to teleport to any psionic trap and detonate it there. Psionic Projection Channeling does not disrupt Meld.

Effect: Mystical traps are set by the Templar Assassin, who keeps an eye on enemy movement invisibly. They slow down the region by 30% when they are sprung at her command. After 4 seconds, traps charge up to 60% slower. when fully charged, deals additional damage.

Boots of Speed: Is essential for every hero in the game to have in order to flee and pursue when required.

Bottle: Is crucial for keeping runes safe and maintaining her health and mana as she scours the map in search of kills.

Blight Stone: Is a fairly affordable early-game item that can later be upgraded to a Desolator.

Magic Stick: When Templar Assassin is up against heroes who constantly spam their abilities. When employed appropriately, the instantaneous restoration of life and mana can change the course of a battle.

Power Treads: Gives her the necessary characteristics, increasing her health or mana at command and accelerating her attack.

Magic Wand: Utilizes the earlier Magic Stick and branches and has a stronger potential heal burst.

Blink Dagger: Is necessary to realize the full potential of Templar Assassin. She is a ranged hero in theory, however her base attack range is more like a melee hero's. She can use a Blink Dagger to close the distance between her and the target of a Meld assault or to catch up to those who have been hindered by her Psionic Trap. Her ability to position herself to make the most of Psi Blades in teamfights is helpful. On the other hand, when used in conjunction with her spells, it makes a fantastic escape tool. Refraction keeps the dagger from becoming disabled, but if it does, Meld can aid her in hiding for a brief period of time before blinking out if the adversary has True Sight or area spells.

Desolator: Improves the damage output of the Templar Assassin significantly, as the Templar Assassin only does physical damage by default (besides Psi Blades). Desolator fully stacks with Meld's armor reduction, enabling her to decrease up to 15 armor on a victim. Due to the fact that Psi Blades base their damage on the amount of damage the initial assault victim took, this results in a significantly enhanced damage output. Desolator furthermore provides a respectable boost to raw attack damage.

Black King Bar: May be necessary to handle disables; while Refraction protects her from all damage, it does not stop disables. A Black King Bar should be purchased if evading their disables with blink or Meld is not possible. Her damage output and survivability are further increased by the item, which also provides some raw damage and a small amount of health.

Assault Cuirass: Similar to Desolator, Templar Assassin works well with it because it lowers enemy armor and speeds up her attacks, increasing her damage output significantly. In addition, the extra protection makes up for her softness. It adds value to any teamfight because both the armor enhancements and decreases are auras.

Heart of Tarrasque: Thanks to its large health boost, Templar Assassin can fight for a lot longer. Being tanky does not aid her much while she deals minimal damage, so it should only be purchased after considerable damage has been done.

Butterfly: Is a fantastic item that every agility hero should have because it greatly enhances attack speed and damage while also giving evasion to assist defend against opponent strikes. Additionally, the evasion works quite well with Refraction, which keeps all of its damage-blocking charges even when Templar Assassin avoids strikes.

Manta Style: Can be taken into account on Templar Assassin if more push power is needed. If one has quick reactions, one can also use its active to break up opponent spells and strikes. Additionally, it has respectable numbers and considerable mobility. The Templar Assassin is still a ranged hero, hence the ranged illusion values and cooldown are utilized despite the fact that she has an attack range that resembles that of a melee weapon.

Daedalus: Is a fantastic gear for Templar Assassin because Psi Blades' critical hit spreads to all adversaries. It also complements her powerful armor reduction from her ability and her usual item preferences quite nicely. However, other damage-increasing items are needed first to unlock its high potential because it is a chance-based effect and is dependent on her attack damage.

Eye of Skadi: Gives qualities for damage and tankiness, while the slow also keeps opponents within striking distance.

Ghost Scepter: Is an excellent choice against her as she almost exclusively depends on physical damage

Eul's Scepter of Divinity: Since she lacks a strong disable to hold her opponent down, she can afford you valuable time to TP away.

Force Staff: Can get ahead of her, but unless you can force yourself onto high ground, her psionic trap will make it simple for her to catch up.

The early stages of the game are when you will most likely lose if you do poorly. This is due to the fact that you are a hero of the middle lane, which in a sense is in charge of the other lanes. You must gank the other lanes, and if you are struggling in the middle, it's likely that you won't be able to do so before the other mid, costing you the game. BUT DON'T BE AFRAID! One attack from the Templar Assassin can deny, last hit, and harass without the use of a damage charge from Refraction, making him an extremely potent hero.

Keep in mind that you are a ganking mid when playing. By the time you reach level 6, you will need farm, brown boots, a wand, and, if you're doing particularly well, phase boots. By level 6, use Psi Blades to break up the wave before ganking. If you obtain the right rune, you can even gank before six, which is a terrific introduction to.

This is the point in the game that you either succeed or lose TA. She is so focused on building a snowball that if you invest two minutes in a gank that fails, you will be significantly behind. This is mind, especially if you have allies to assist you, you should really be failing ganks.

By the time this step is over, you'll need a Desolator. Finding an enemy with low armor and approaching him with your fast movement speed thanks to Yasha, Phase Boots, and the Drum of Endurance will allow you to win the game with this gear. Watch as they disintegrate from your -12 armor as you melt next to them, hit them, and pop refraction.

Additionally, you need to put up traps around the entrances to jungles, on high ground in the middle of busy areas, and not only on top of runes (excellent if your team doesn't use wards). Don't be afraid to utilize your traps if a team battle breaks out nearby; a 50% slow can change the course of the game if they need to reposition.

Are you being beaten up? If so, obtain a tarrasque heart. Get a Butterfly if you only need a small bit of survivability. Though it depends on the situation, this is undoubtedly the superior option. Your illusions deal a good amount of damage thanks to your deso debuff, so employ your Manta Style to help you push down towers. At this stage, ganking is probably not a possibility; just try to win the game.