"The self-righteous shall choke on their sanctimony."

Terrorblade, a demon living outlaw of the Underworld, even other demons have to fear him. But he made a mistake when he dared to steal the Demon Lord's things and was punished for his crimes. Even hell has its own hell, Terrorblade is imprisoned in Foulfell.

But Foulfell is not an ordinary prison, the demons imprisoned here all have to look in the mirror that reflects the evil and disease in the souls of the demons, causing great fear and pain for the demons. demons by their own souls.

But Terrorblade not only feels no pain, he overpowers his most fearsome soul and uses that copy to cause terror to all creatures.

Deep in the depths of hell, Terrorblade is imprisoned behind rugged walls, forever tormented mentally by his crimes through the mirror at Foulfell. He looked at his worst reflection day by day, and the shadow in the mirror looked at him too, and so on and then one day they fused together, rising up and stronger than ever... 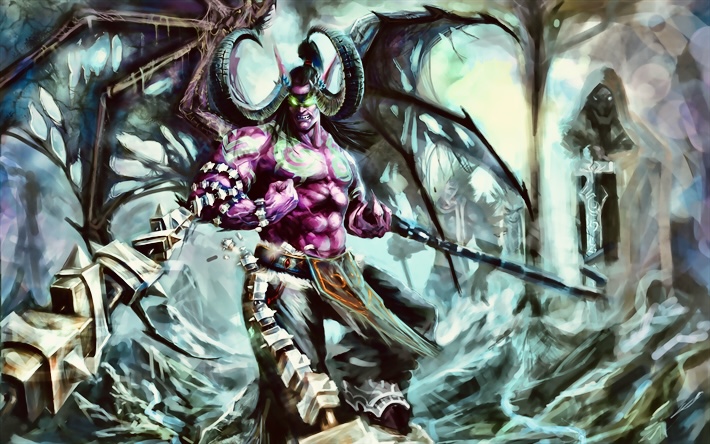 You can get Metamorphosis (E) first or Reflection (Q) first, that's okay, it's best to just leave the level 1 bonus there, as long as it's nothing special, until the creeps come out to fight. it's not too late to add.

Maximize Metamorphosis (E) first to get bonus damage from this ability, note the bonus damage here is white damage and clones benefit from this % damage. Then maximize Conjure Image (W), combining these two things makes TB and clones hit harder, increasing the ability to push the pillar push line. Reflection (Q) can be maxed out at the end, Sunder (R) gets the right level to cheat.

Effect: casts a target-like illusion on all nearby enemy champions, slowing the opponent's movement and attack speed, this illusion will continuously attack that champion until it disappears. This illusion cannot be attacked.

Effect: he transforms into a true demon, increasing attack range, base attack speed, and damage but becoming slower to move. All clones standing around him will automatically change to this form.

Effect: TB swaps his own health with 1 random target champion (can be used on clones), the amount of swap health received by the enemy cannot be reduced by more than a certain %.

Minimum amount of health received by the target: 25%

Effect: Casting this spell costs 20% of Terrorblade's current HP, banishing him and giving him +50 Movement and +50 Attack Speed for 7 seconds. While in melee, gives you a 100% boost. 14-minute cooldown.

Effect: Terrorblade Metamorphosis is granted for 10 seconds and causes a wave to flow outwards in all directions, causing opponent heroes to become frightened upon hit.

Power Treads: His illusions benefit from the attack speed and characteristics provided by Power Treads.

Dragon Lance: In Metamorphosis, Dragon Lance substantially boosts attack range, allowing Terrorblade and his illusions to strike towers from a safer distance. He has the option of upgrading the item to Hurricane Pike or dismantling it to create Black King Bar and Yasha.

Manta Style: You may have even more illusions using Manta Style. If Terrorblade uses the item while in melee form and then casts Metamorphosis to convert all to ranged illusions, he can obtain greater illusions and a shorter cooldown.

Eye of Skadi: Eye of Skadi provides a lot of qualities that help bulk up his illusions, and its sluggish attack and movement speed works well with Metamorphosis to put opponent heroes to a standstill.

Black King Bar: When Terrorblade's health is low enough to merit using Sunder, Black King Bar stops him from being stunned or silenced.

Butterfly: Butterfly benefits illusions by providing agility for harm and evasion for defense.

Diffusal Blade: Diffusal Blade provides agility and Manabreak, both of which enhance damage on Terrorblade and illusions; the active can also delay enemy targets, preventing them from retaliating quickly.

Linken's Sphere: The characteristics, regeneration, and Spellblock provided by Linken's Sphere shield Terrorblade against most targeted abilities, boosting the possibility of Sunder success.

Blink Dagger: Terrorblade can leap right after casting Metamorphosis with Blink Dagger, forcing weaker adversaries to face you and your illusions one-on-one. Terrorblade may shift the tides in their favor when coupled with Terror Wave, which was released after Aghanim's Scepter and serves as a replacement for Metamorphosis. Terrorblade can pick between a Swift Blink, which raises his already-high attack damage and attack speed while also offering added movement speed to hunt down fleeing foes, and an Overwhelming Blink, which provides an immediate magical damage burst and improves his teamfight sustainability.

Ethereal Blade and Dagon: Ethereal Blade and Dagon are highly good at breaking down Terrorblade before he can use Sunder to rescue himself. Furthermore, they are both effective against him in different ways: the former may be utilized to shield the targeted hero after Terrorblade has used Sunder on him. It can also be used to disarm Terrorblade and make him more vulnerable to magic damage (assuming he doesn't have any dispelling items), and aside from Sunder, Terrorblade has no other way of dealing damage than direct attacks, whereas the latter can instantly destroy illusions upon casting and kill real Terrorblade before he can use Sunder to save himself.

Linken's Sphere: Sunder will be prevented by Linken's Sphere, and Terrorblade has no way to spend its cooldown. Furthermore. Terrorblade despises buying single-target items, which are the only way to explode it.

Scythe of Vyse: Terrorblade will be unable to use both abilities and items as a result of Scythe of Vyse and Nullifier.

Satanic: Satanic has the ability to swiftly negate the effects of Sunder.

Earning money is the carry's job forever, but when you have Metamorphosis and the support of your teammates, you can be aggressive early, because considering the 2nd skill level at lv3, Metamorphosis gives you 40 kills bonus damage and also gives 1.6x base attack speed, so it's good to be able to kill right now if you have the support of your lane teammates. When you have the basic equipment, you can go to the jungle if you want to be safe (remember to ask support to put wards at the entrances to the forest).

At this point, once you have your Manta style, you can stick to 1 lane to push straight very well with extremely high speed (in one game I took out all 3 enemy turrets in less than 4 minutes) in 1 lane). The push is very simple: when your creeps are close to entering the enemy turret, turn Metamorphosis up, create a clone using Manta style, and pull all focus to the turret. The money gained from pushing lanes and pushing towers will allow you to buy Eye of Skadi very quickly. Sometimes you can join a few teamfights during this phase.

With your teammates pushing all the way in this phase, with this phase you can buy Boots of Travel, you have the ability to push 2 lanes at once and be present to participate in teamfights when needed. Don't forget to control Roshan. TB's def ability is also very good when your job is just to create clones and pull out to fight soldiers, very safe.