“The elements of my nature are in torment.”

Leshrac is a being ripped from the heart of nature, a normative life whose existence saves half on the plane of matter, the other half on the other. Knowledge was so profound that he could not for a moment ignore a moment of terrible pain that exploded in the heart of all creation. Once a great philosopher, he delves into the ravines of nature with haunted Chronoptic crystals, only to be forever transformed by the horrifying mysteries now unearthed. Now, his pride is the only light that shines in the darkest abyss of enlightenment. Like all elemental beings, he was one with nature, but a nature of beauty and vileness. He alone sees the cruel truth of reality, and therefore no longer believes that the universe will reward the doer of good. 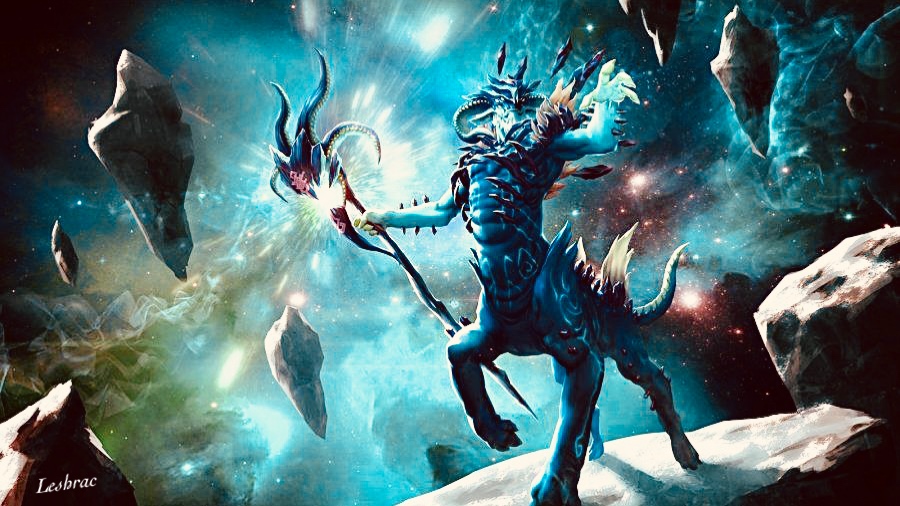 The first way is the way you get the large area control skill with the maximum of Split earth (Q) and Diabolic edict (W) skills because the more Split earth (Q) increases, the larger the area, and Diabolic edict (W) If you lift to the maximum, then push is strong enough. The second way is in favor of push/gank direction when parallelizing Lightning storm (E) with Diabolic edict (E): both deals good damage to champions, minions and monsters, and ensures damage to turrets, but Split earth (Q) ) will be a bit difficult to use because the area is too small. Leshrac’s ultimate is usually obtained at later levels because Leshrac already has a decent amount of mana to use.

Effect: Creates a concussion at the target location, dealing 120/180/240/300 damage and stunning all enemies in the area of impact.

Effect: emits shock explosions around himself, creating a total of 40 explosions and dealing 9/18/27/36 damage per explosion to nearby enemies, damage is evenly divided give all enemies standing around Les (if standing in the crowd, divide the dmg, and 1 guy standing there will eat enough). This skill deals damage to the whole building.

Effect: Strikes a bolt of lightning to the specified target, dealing 50/100/150/200 damage, slowing the enemy for a brief moment and bouncing onto enemies nearby the main target, dealing same damage and effects.

Effect: emits destructive energy around Les, dealing 100/130/160 damage per second to all enemies around him, however he will drain mana over time to maintain.

Effect: All nearby opponents in a 450 AoE become ethereal, preventing them from attacking and subjecting them to 30% greater magic damage and a 30% slowdown for 4 seconds. Leshrac's speed is increased rather than decreased. You will not be subjected to increased damage.

Magic Stick: Leshrac's ability to use abilities is aided by the use of Magic Stick, which provides burst health and mana.

Boots of Speed: Leshrac's movement speed is boosted by Boots of Speed, allowing him to position and chase with Disbolic Edict.

Bottle: The Bottle aids in the preservation and storage of runes for the appropriate moments.

Soul Ring: The Soul Ring provides regeneration and more mana, allowing you to use more skills.

Arcane Boots: Leshrac and teammates gain mana from Arcane Boots, which may be disassembled later for Bloodstone or Aether Lens.

Bloodstone: Bloodstone boosts Leshrac's health, mana, and mana regeneration, allowing him to use his skills more frequently. Leshrac's active heal may keep him alive long enough to flee or avoid taking damage in exchange for kills.

Kaya: Kaya increases Leshrac's intelligence and spell damage while lowering the mana cost of abilites and items, allowing him to use them more frequently.

Octarine Core: Octarine Core improves health and mana to ensure long-term viability. Leshrac can use his skills all the time while staying healthy thanks to Cooldown Reduction and Spell Lifesteal. To get the most out of this item, you'll probably need a lot of mana or regeneration.

Shiva's Guard: Leshrac's survivability against physical assaults is improved by Shiva's Guard's armor and attack speed slow aura, as well as his intelligence. Arctic Blast can be used to slow enemy mobility and keep them within Pulse Nova's range.

Urn of Shadows: The Urn of Shadows grants some characteristics, armor, and mana restoration, and its charges from fallen opponents can heal or deal damage depending on the victim.

Aether Lens: Leshrac can use abilities and items while keeping a safe distance from dangerous adversaries thanks to Aether Lens' increased mana and mana regeneration.

Blink Dagger: Blink Dagger provides an excellent location for a surprise Split Earth, as well as keeping up with Diabolic Edict and Pulse Nova targets.

Force Staff: The Force Staff allows you to relocate any of the game's characters, pushing allies to more advantageous spots while moving opponents into your abilities.

Glimmer Cape: The Glimmer Cape provides invisibility and magic resistance to Leshrac and companions. It is an item for escape, but it can also be used to initiate with Split Earth.

Boots of Travel: Leshrac may use his Boots of Travel to travel throughout the world to join ganks and pushes. Leshrac can also chase down practically any enemy target thanks to his increased movement speed.

Rod of Atos: Rod of Atos provides qualities and a root for long-range Split Earth setup.

You can go offlane, solo mid, in many unforeseen cases you can go double or roam (however with a big nuker like Les, doing so is a waste of his potential). When in lane, simply farm, harass the enemy with hand damage and skills. When you have the support of your teammates, you can use a little standard skill and you will get kills anyway, creating favorable conditions in the beginning, as well as opening up the opponent's defense to be able to push the turret early. Les only has the ability Split earth (Q) which is difficult to use, but the other skills have nothing to do with ease (click to activate or select a target, not an area like this skill) . You are ready to follow the Town portal scroll early to be able to reverse lanes to support your teammates with your extreme skill set.

Mid game onwards is the time when you show your hegemony with great damage from skills, and also a nightmare for the enemy turrets because you are too fast with Diabolic edict (Q ) (2 times used + hand hit + creep hits the turret, it's nothing :mrgreen: ), and about fighting, all your skills deal damage, so when Les' mana is still high , then your team's damage is guaranteed very well, your job is to base Split earth (Q), then every other skill is released, remember to pay attention to keep your position while ganking as well as Join the small combat, because at first, Les is not a hero so strong that he rushes to pick up all the skills of the enemy. Blink dagger makes you a real monster in this phase because of its high mobility, gives you an unexpected advantage, helps you approach and stack damage extremely easily.

When you have the equipment of your dreams, this is the time when you are most enthusiastic. At this stage, you should stay around with your teammates, participate in combat, control the big target of Roshan or the remaining towers of the opponent. Because of the great damage, the lack of you in the teamfight affects a lot. In total combat, it's still the correct Split earth (Q), choose a position and then release all of your skills. If you haven't bought Boots of travel yet, never forget to buy a Town portal scroll to be able to reverse lanes, defend turrets in time, and mana is an eternal problem for you: you can def/push easily thanks to his skill set. However, mana use is extremely high, so managing your mana is also a decisive factor to your success with this hero.