+1.5 Corruption to Visage and Familiars

+1.5 Armor Corruption to Visage and Familiars

+1.0 Armor Corruption to Visage and Familiars

“None may flee death for long”

Hidden beneath the gazes of the dim gargoyles sitting mockingly atop the entrance to the Narrow Maze was the entrance to the underworld. Beasts, birds, humans and monsters, all creatures that died and decided to pass through the afterlife had to pass through "them". For unshackled souls, the decision to walk through the darkness that shrouds death is inescapable. When the opportunity comes, one way or another, the souls who have not yet rested will find a way to escape from hell and heaven. That's when Visage, the henchman of the eternal Necro'lic souls, was sent to capture them. Ruthless yet effective, unfettered by the principles of death and weariness, the Visage hunts its prey mercilessly or restlessly, ready to kill all who shelter the fugitives. . The laws of the afterlife never rest, it's only a matter of time before Visage finds and returns those souls. 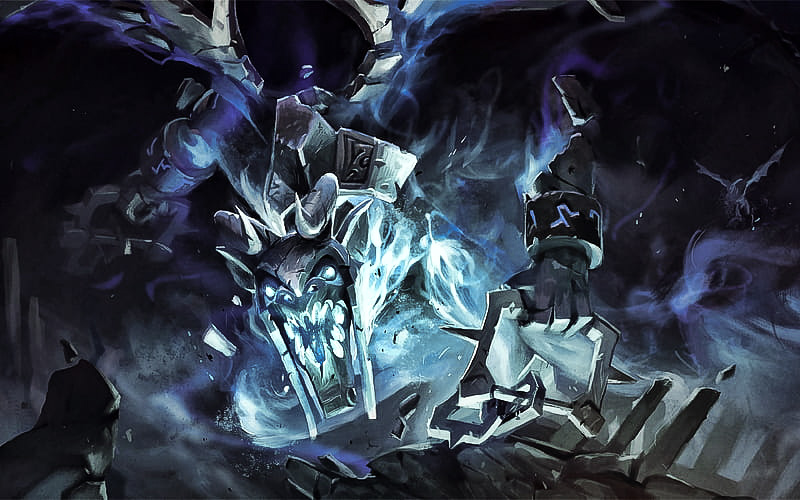 Get 1 point of Gravekeeper's Cloak (E) at the first level to increase the defense for Visage (new to negative armor, 10% magic resistance, slow movement speed, no matter what you take), then Grave chill (Q) for the ability to control.

Maximize Soul Assumption (W) first because this is Visage's main damage ability, finishing the target (attack is the best defense that :mrgreen: ). Then you can max out the remaining 2 moves (if you want to tank, max armor, and if you want to max slow the enemy, max Chill). Ultimate get the correct level.

Effect: Visage cools the target down, stealing the target's movement and attack speed.

Effect: every time the heroes around Visage take damage (both allies, enemies and himself), he will accumulate damage points. When cast, he will fire a blast of death and deal damage based on those stacks.

Value per damage point: equivalent to 110 damage dealt to heroes.

Effect: Accumulating bonus points over time helps Visage increase magic resistance and armor. Each stack will be lost according to the number of times Visage is attacked.

Effect: Summons his grave bats to fight under your control.

These bats have the following special skills:

Health: 3 hits from champions, 6 hits from turrets, and 12 hits from other units.

Duration: forever or until killed.

Note: when you use this skill again and the old bats are still there, the old bat will die immediately.

Silent as the Grave

Effect: Visage and familiars become invisible, and Visage's movement speed is increased and its movement type is upgraded to flying. Visage and its familiars do greater damage for 4 seconds after they escape invisibility. This video is 35 seconds long. When fighting or casting, invisibility ends.

Boots of Speed: Visage's slow movement speed necessitates the use of Speed Boots. Visage may chase adversaries during ganks by getting boots as early as possible in the laning phase, especially to come within range to throw Grave Chill to slow them.

Boots of Speed: Visage's slow movement speed necessitates the use of Speed Boots. Visage may chase adversaries during ganks by getting boots as early as possible in the laning phase, especially to come within range to throw Grave Chill to slow them.

Ring of Basilius: Visage's lane has greater physical survivability as well as some mana regeneration to keep spell casting going. It may be upgraded to Vladmir's Offering once you've completed the laning stage.

Medallion of Courage: In Visage's hands, the Medallion of Courage is a potent utility support item. The item grants Visage with armor and mana regeneration, increasing his survivability and allowing him to sustain his mana pool. The active allows him to either augment or diminish an enemy's armor to increase the amount of damage they suffer from friends, Visage's attacks, and, most crucially, his Summon Familiars.

Magic Wand: Visage gains extra characteristics and greater charge storage for burst regeneration with the Magic Wand, which is made from Magic Stick. Visage, as a support, may tremendously benefit from both if she is short on farm.

Solar Crest: Many of the same bonuses are available with Solar Crest, which is an upgrade from Medallion of Courage. Visage's armor, stats, and mana regeneration have all been enhanced, giving him even greater tankiness and allowing him to keep his mana up until late in the game. Can be used on foes to reduce target armor and delay and boost familiar damage. When assaulting towers, it may also be used on a familiar to grant it +80 attack speed.

Aghanim's Scepter: The increased move speed during invisibility and bonus damage after breaking out make Aghanim's Scepter a powerful item for Visage, since it can lead to higher kill potential when attacking a target. Visage gains all-around benefits from the item, including increased health and mana.

Rod of Atos: Visage gains greater life, more intelligence for mana and base damage, and a long-ranged root with a low cooldown from Rod of Atos. Visage's ability to hunt down adversaries is considerably enhanced by the ability to root them at long range with the active, then stun them with Familiar's Stone From, and end with Grave Chill for extra movement speed slow.

Assault Cuirass: Visage's armor and attack speed are considerably increased by Assault Cuirass, making him a formidable opponent in teamfights and ganks. The aura can increase the attack speed of his Familiars and lower enemy armor, allowing the Familiars' assaults to deliver more damage.

Glimmer Cape: Visage and her comrades are saved by the Glimmer Cape, which provides magic resistance and invisibility.

Ghost Scepter: Visage becomes invulnerable to physical assaults with the Ghost Scepter, allowing him to employ more abilities and equipment.

Aether Lens: Only two of Visage's spells and any appropriate equipment, such as Force Staff or Orchid Malevolence, benefit from Aether Lens, although Grave Chill and Soul Assumption can help him attack foes from afar.

Force Staff: Visage gains more intelligence from Force Staff, which increases his base damage and mana pool size while also providing some life regeneration. Visage may use the active to rapidly reposition himself to perform spells during ganks and engagements, as well as to flee if necessary. It can also be used to save teammates who are caught out of position.

Hurricane Pike: Hurricane Pike helps him become more competent at attacking by allowing him to build out of Force Staff. Visage's range is already rather strong, so he may aid in combat without placing himself in too much risk while his Familiars strike.

Mekansm: Visage's utility is improved thanks to Mekansm, and he may help his team even more by healing them. Visage's durability is greatly improved by the enhanced characteristics and armor, making him more tanky in battle and allowing him to contribute more.

Pipe of Insight: Visage's team can benefit from Pipe of Insight's increased survivability and utility. When Gravekeeper's Cloak is down, Visage can weather magic nukes more successfully, and the magic barrier can protect teammates from magic damage during fights.

Guardian Greaves: Visage's Guardian Greaves are a potent support item that allows her a lot of versatility in teamfights. Visage is significantly tankier thanks to his enhanced attributes and aura, and he can heal himself while simultaneously eliminating negative debuffs with the active.

Nullifier: When a familiar attacks the target, Nullifier's slow will be applied, and because the slow duration is the same as the attack time for familiars, the slow can be applied to the target for the duration of the mute. This item may also be used in conjunction with an Orchid or Bloodthorn to successfully debuff an adversary for the same length as a Scythe of Vyse, but with the added benefit of Bloodthorn's guaranteed crits and Soul Rend effect.

Lotus Orb: Because of the fear of reflection, enemy heroes are hesitant to use single-target abilities against Visage or impacted allies when utilizing Lotus Orb's Echo Shell. Otherwise, it provides Visage with armor and regeneration, allowing her to last a bit longer in battle.

Scythe of Vyse: Scythe of Vyse is a powerful support item that, despite its high cost, gives a lot of value. Visage's all-around qualities, bigger mana pool, and enhanced mana regeneration let her to contribute more in teamfights, and the immediate hard-disable may be critical for ganking and disabling key targets in teamfights.

Shiva's Guard: Visage's resilience against physical damage is considerably improved by Shiva's Guard, as is his mana pool and basic damage. The active may be utilized as a slow and nuke, slowing an adversary even more while also increasing damage for Soul Assumption.

Black King Bar: Grave Chill, Soul Assumption, and Stone Form are all nullified by Black King Bar, removing some of Visage's damage and all of his control.

Radiance: Visages' Gravekeeper's Cloak will be no match for Radiance.

Smoke ganking, going around the jungle and then getting behind the enemy to gank are common things for support when roaming, or pulling, stacking jungle monsters. To play Visage effectively, it is best to move flexibly between lanes. You need to have a certain amount of money and items to be able to support your teammates and deal better damage to enemies.

At this time, you should work with the gankers and tankers to put pressure on the opponent by pushing the tower, also to prolong the time for your carry team to farm important items. Familiar will completely recover stack dmg when using Stone form, and Familiar's attack speed is very fast, so Visage's ability to push towers is extremely good, moreover Stone form also stuns enemies, you can use used in many cases of chase/gank/escape/cover (however the cast time is a bit slow), in different situations you can also use Familiar to tank damage from minions and turrets.

Nothing special, this stage you should always be with your allies to push the turret, put pressure on the enemy and control the big goal: Roshan. Late game Visage is quite weak when the opponent has quite a lot of equipment, the damage done by Visage will not be the same (unless you intend to buy a bunch of armor-less items to rebel as a carry, this is completely Feasibility).