“From a place beyond time, and time beyond counting."

Darkterror the Faceless Void has arrived from Claszureme, a realm beyond time. It's unclear why this being from another dimension thinks the battle for the Nemesis Stones is worth entering our physical plane, but apparently a shift in the balance of power in this world has consequences in other dimensions. Darkterror sees time only as a means of thwarting his enemies and assisting his allies. His long-term perspective on the universe has given him a distant, disconnected demeanor, though he is perfectly capable of making it personal in battle. 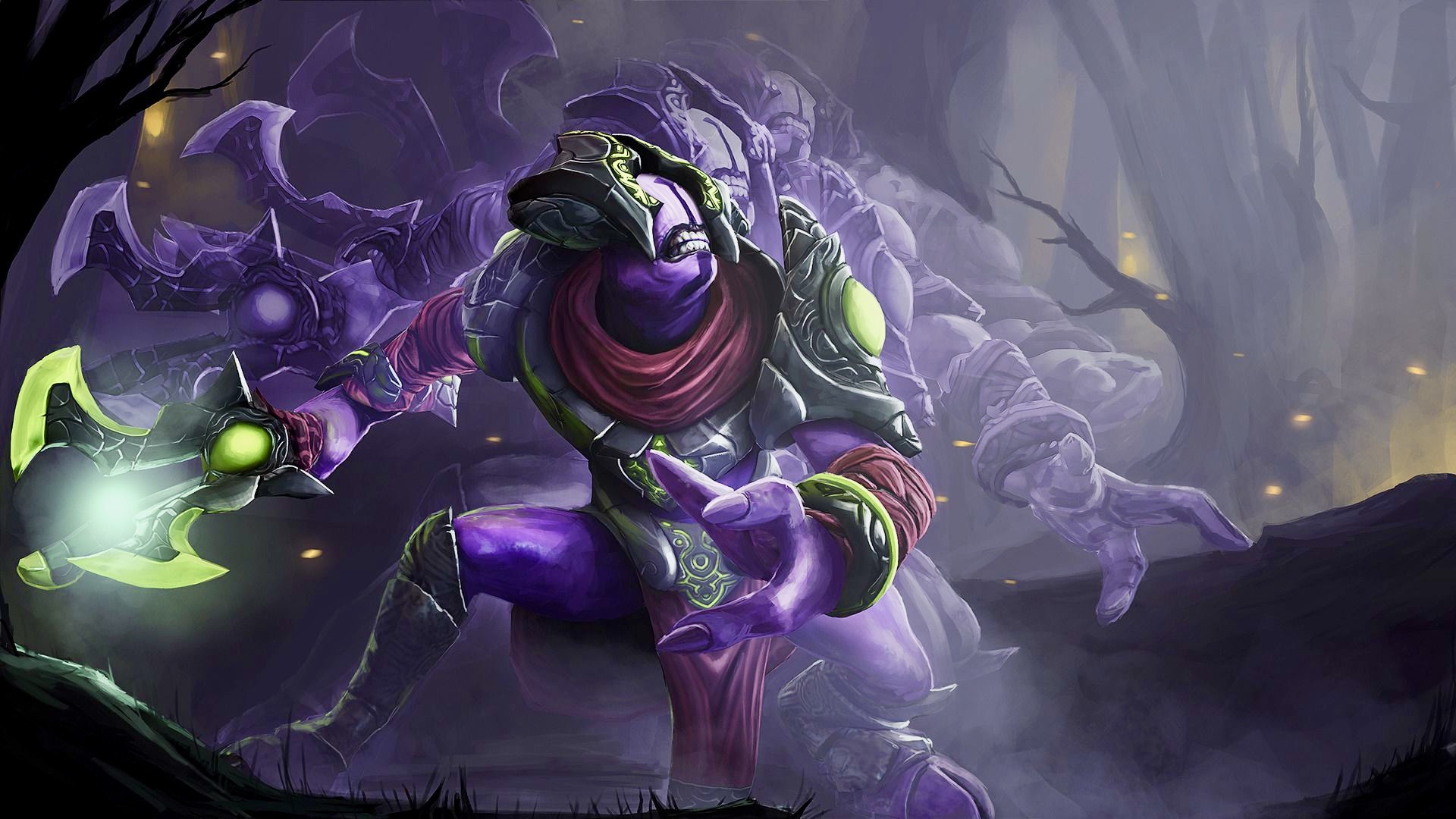 When possible, put points into R. Max E first to increase damage and the chance of a proc, which greatly increases your DPS. Max Q second to reduce the cooldown on your dash, which is essential for mobility and defense. W can be maxed last because you'll only be casting it once per fight, and the duration of 6 seconds is sufficient for the early and mid game.

Effect: Rushes to a specific location while tracking any damage taken in the previous two seconds.

Effect: For 8/9/10/11 seconds, Faceless Void traps all nearby enemies in a time dilation field, extending their cooldowns and slowing their movement and attack speed by 10% for each cooldown extended. For each cooldown, deals damage per second.

Effect: Adds the possibility for an attack to lock an enemy unit in time while attacking it again.

Effect: Creates a blister in spacetime, trapping all units caught within its sphere of influence and causing you to move extremely quickly within it. Faceless Void and any units he controls are immune. In the sphere, previously unseen enemies will be revealed.

Boots of Speed: Give him faster movement speed, which is important in the early game because he is a melee hero who needs to be able to position himself quickly for last-hitting and avoiding harass

Power Treads: Gives Faceless Void bonus attack speed and the ability to switch attributes, which is useful for giving him more HP for survivability, more mana for casting spells on his limited mana pool, or more attack speed and base damage.

Mask of Madness: Allows Faceless Void to lifesteal, which is important for keeping his HP up, especially while farming in the jungle The active also grants him a lot of attack speed, allowing him to proc Time Lock, which works with lifesteal.

Maelstrom: Chain Lightning provides Faceless Void with some decent bonus damage and flash farming capability, while also improving his DPS during multiple heroes in Chronosphere, demolishing any foes in his catch.

Mjollnir: Is a powerful farming and attack damage item that greatly increases the damage output of Faceless Void during Chronosphere. Faceless Void can farm creeps more quickly thanks to the increased attack speed and Chain Lightning, as well as proccing multiple times during a Chronosphere to spread magical damage around to all caught enemies. Furthermore, the active allows Faceless Void to punish enemies who attempt to attack him, regardless of whether he is inside a Chronosphere or not.

Butterfly: Its evasion increases his ability to ignore enemy attacks while increasing his agility, damage, and attack speed.

Black King Bar: If the enemy has ranged disablers or nukers that can position themselves to avoid being caught by Chronosphere, this can be a powerful defensive item. Activating spell immunity during Chronosphere protects Faceless Void from being disabled or nuked from outside the sphere, allowing him to focus his full attention on targets inside. The item increases both HP and attack damage.

Satanic: Mask of Madness is extremely valuable to Faceless Void because the amount of health regained is doubled thanks to Time Lock's proc, especially when its active is casted, allowing him to fight back even when his Time Walk is on cooldown, further refining his sustainability while providing bonus damage.

Vladimir’s Offering: Mask of Madness icon.png is a more secure alternative. Mask of Madness, exchanging attack speed for an aura that affects your team, giving them lifesteal and armor.

Hand of Midas: Can be regarded as a farming item that provides much-needed attack speed and allows him to catch up on gold acquisition until late in the game.

Battle Fury: Is a well-balanced farming item that grants Faceless Void self-sustainability as well as attack damage. The HP and mana regen allow him to farm for longer periods of time without returning to base, while the cleave, bonus creep damage, and extra attack damage allow him to farm creeps faster. The cleave allows him to distribute physical damage throughout the Chronosphere, which is useful if he is able to catch multiple enemies in close proximity. It also works with the damage from Time Lock.

Monkey King Bar: Increases his attack damage and can be a necessary item for dealing damage to enemies with evasion, especially when combined with Time Lock's proc, which may allow him to proc twice.

Aghanim's Scepter: Is a situational item that can be found on Faceless Void. Faceless Void can use Time Walk to apply a Time Lock to each enemy near his destination. This item can be combined with Battle Fury to deal massive cleave damage to illusion heroes.

Moon Shard: Faceless Void may benefit from a high-damage item. Because of his greatly increased attack speed, he can proc Time Lock and certain items much more frequently, significantly increasing his DPS. The increased night vision range can provide him with a significant vision advantage at night, allowing him to initiate good fights that he would not have seen otherwise. Consuming the item frees up an inventory slot for a permanent attack speed boost and an additional late-game item.

Daedalus: Is one of the best damage-boosting items available to Faceless Void. The additional damage and critical proc will greatly increase his physical damage output, and it also works with Time Lock. Faceless Void becomes a terrifying threat to enemies when combined with some attack speed boosting items.

Diffusal Blade: Is a solid damage-boosting pick up that also allows Faceless Void to slow down a single enemy. It's also a good item to have if you're up against enemies who rely on mana (such as Medusa and Wraith King ).

Blink Dagger: Faceless Void's initiation factor is greatly increased. It's an important item for catching multiple enemy heroes because its range is nearly double that of Time Walk. This can be upgraded to Swift Blink, which increases his attack damage and speed while blitzing.

Refresher Orb: Faceless Void can cast Chronosphere twice in a teamfight with this risky but powerful utility item. While purchasing a Refresher Orb will reduce Faceless Void's carry potential because it does not increase his damage output, doubling Chronosphere's disable duration can give Faceless Void's team an additional window with which to focus and burst down enemy heroes, which can be necessary for winning fights.

Nullifier: Can be picked up by Faceless Void to nullify Faceless Void's damage inside Chronosphere if the enemy has an Aeon Disk, as it removes the Combo Breaker effect. It also provides him with a lot of damage as well as some armor and HP regeneration.

Linken's Sphere: Is commonly used in conjunction with Time Walk to increase the survivability of Faceless Void. It prevents single target disables or silences from interfering with his Chronosphere initiation and can save his life in a gank.

Heart of Tarrasque: Is always beneficial to any low-HP hero. The massive HP boost will allow Faceless Void to better withstand attacks, particularly from damaging nukes launched from outside of a Chronosphere. Outside of battle, his HP regen can also allow him to become a bigger threat to the enemy team if he manages to slip away temporarily, as he can return with a full HP bar that the enemy must chip away at all over again.

Aeon Disk: If he becomes disabled, he can counter-initiate with Chronosphere or escape with Time Walk, which greatly increases his survivability.

Aeon Disk: Will prevent damage for a short time, possibly keeping the wielder alive during Chronosphere.

Orchid Malevolence: Can prevent Faceless Void from using his abilities in a team fight or from fleeing a chase.

Scythe of Vyse: Faceless Void is prevented from casting any spells or items, as well as attacking, making it a more reliable version of Orchid Malevolence.

Eul's Scepter of Divinity: On the Faceless Void can prevent him from entering his Chronosphere and thus protect whoever he has trapped inside. The same can be said for a teammate's preemptive cast and Wind Waker.

Crimson Guard: Can assist in preventing allies from being killed in Chronosphere.

Ethereal Blade: Can cast on allies to keep them from being attacked in the Chronosphere.

Blade Mail: Can prevent the void from obtaining the chronosphere.

Your ability to contribute to fights improves slightly once you reach level 6 and have access to Chronosphere. Even at rank 1 of your R, the stun duration is quite long, but your DPS will still be low at this point, and chances are you won't be able to kill someone from full health during the CC. This turns your R into more of a setup tool for your teammates, allowing them to hit the targets inside the sphere from a safe distance while you deal whatever damage you can. If you're being focused down, you can use R to survive, but it has a long cooldown, so try to use other tricks like Q and teleport scrolls before you're forced to waste your R defensively.

Maintain the Farm. Faceless' late game scaling is extremely good, so you shouldn't rush into fights if the game appears to be moving slowly and uneventfully. Every minute you can farm freely brings you closer to 1v5 potential with a strategically placed Chronosphere. Take free kills when you see them and respond to ongoing fights as needed, but spend as much time as you can afford farming for items.

Avoid Being Caught. You'll only have Time Walk and, to a lesser extent, Chronosphere to keep you safe, so keep an eye on the map and decide for yourself which enemy heroes can threaten you even with those abilities activated. When those dangerous enemies appear elsewhere on the map, you'll be able to take more risky farming as long as you have your Q (and possibly R) off cooldown and ready to use to flee.

Roshan's Aegis of the Immortal drop is extremely valuable to whichever team obtains it. When a single team fight can decide the game late in the game, this is an important objective to contest (or sneak) when possible. It's usually preferable to let one of your teammates check the pit (or use the map's scan ability) rather than walking in yourself. If you find the enemy team inside the pit, you can use Chronosphere to catch them all and win the team fight for free.

Your positioning will be determined by the cooldowns you have active at the time. Because Time Walk is your primary means of escape, you can play a little more aggressively while it is active (and preferably with your Black King Bar available). If the enemy team engages you, feel free to hit the frontliners until the enemy backline is close enough for you to ult them. Keep an eye out for enemy defensive items like Glimmer Cape and Ethereal Blade to avoid overextending yourself thinking you can kill an enemy who still has an ace up their sleeve.

If you have Boots of Travel or Boots of Travel 2, combine a buyback with the teleport to quickly rejoin fights taking place anywhere on the map. This is extremely useful when attempting to end the game because the opposing team will almost certainly have some members who can buyback. If you die and then buyback and teleport back in, the defenders' advantage of being so close to their base will be mitigated.