Enchantress – known as one of the most versatile heroes of Dota 2. With this ability, she can take on many roles in the team, becoming a terrifying force when falling into the hands of the masters.

Enchantress is a strange creature. She has the ability to hear and understand everything, even in the darkest forests. She understood what they had to endure during the development of mankind. Hence, the Enchantress decided to go on an endless journey to listen to more of the inner voices of the unfortunate creatures.

After a long journey of hundreds of years, the Enchantress no longer wanted to just look and listen. She uses her ability to communicate to tell humanity about the thoughts of the creatures in those forests. And humanity is also an understanding species, so they have devised a solution to both cultivate and exploit, so as not to make Enchantress and mother nature angry.

Aiushtha has the appearance of being an innocent, carefree creature of the jungle, which is certainly true, but not so in the whole of her life story. She also understood the suffering of the natural world.

In her life, she has roamed near and far, through every forest whether brilliant or bleak, through every country, through all seasons, meeting friends, exchanging news, bringing laughter and healing to people everywhere she went.

In a world ravaged by war, forests were cut down for timber to build ships and build siege engines; even in peaceful places, forests are cleared to build houses, and to fuel countless fireplaces. Aiushtha heard the pleas of small creatures, hidden inhabitants who needed shade and foliage to thrive. She devoted herself to listening to these unheard beings. She brought their stories from the jungle to the world out there. Believing her cheerfulness to be a kind of Charm, she hopes to use it to change people for the promise of a green future. 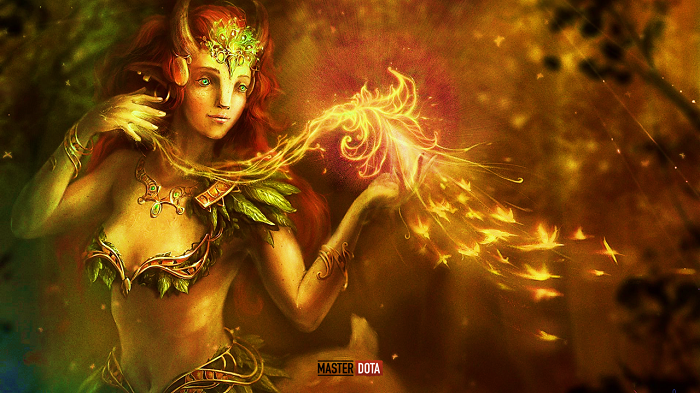 Many wonder why not untouchable in the first levels. Simply because you farm, there is already an Enchant at level 1 to capture monsters, helping you to save blood. Moreover, there is no need to slow the attack speed of jungle monsters because enemy heroes can't hit fast in the early game (except for the perverted Ursa and the fierce PA).

Effect: whenever an enemy hits Enchan with basic attacks, their attack speed will be slowed

Effect: Releases spirits that heal Enchan and allied units around her

Note: the skill heals for a total of 400/600/800/1000 health over the duration. Spirits will randomly select units within range to heal.

Effect: enchants the specified target, if it's a minion or monster, Enchan will capture that unit for a period of time, if it's an enemy champion, it's slowed. At the end of the enchantment time, the target dies. Useless against Ancient creeps and advanced creeps (like Warlock's disciples)

Note: Can capture clones. If this skill is used on a previously captured Enchan unit, the enchantment time is renewed.

Effect: Throws piercing spears at enemies, dealing bonus damage based on the distance the javelin travels until it hits the target.

Notes: Always leaps 180° away from the direction Enchantress is facing. Does not lock Enchantress' facing angle during the leap.

Tango heal every little wound that you get when you go in the jungle or gank attempts.

Healing Salve: recover from a greater clash which happens while ganking or meeting a roaming hero.

Infused Raindrops: regenerate mana and block some damage to go along with Untouchable.

Magic Wand: give more attributes, as well as burst health and mana.

Drum of Endurance: give attributes and movement speed boost.

Aghanim's Scepter: increase Enchantress's damage output and attack range, allowing her to stay farther away from the fray.

Hurricane Pike: help Enchantress make tremendous damage in a short period of time while keeping herself in a safe distance.

Orb of Venom: slow enemy movement speed so Enchantress and her creeps can land more attacks.

Urn of Shadows: grant charges for slain enemies; use them to damage enemies or heal allies.

Hand of Midas: accelerate farm to help Enchantress transition to a damage dealer with her core items.

Helm of the Dominator: provide attack speed and health regeneration for Enchantress and her controlled creeps, enable Enchantress to control another creep to increase the size of her army.

Rod of Atos: give attributes and a root to keep the target in place for Impetus.

Shiva's Guard: give intelligence, survivability, and a slow, allowing Enchantress to keep in range of her targets.

Scythe of Vyse: provide good bonuses to attributes and a hex that allows Enchantress to keep using Impetus on a target.

Moon Shard: increase attack speed for faster Impetus, useful when you have the mana regeneration to sustain it.

Assault Cuirass: allow Enchantress to attack faster with Impetus, and survive for longer in fights with armor.

Untouchable makes all of his attacks slow therefore he is unable to deal damage, especially his critical damage of Chaos Strike, also enables you to escape easily from his attacks. Reality Rift is still a danger because he can decrease a good amount of armor, making it dangerous because of her little armor stat.

Impetus will deal huge amounts of damage when he uses a Fire Remnant to escape. Flame Guard is useless against Impetus. Enchant dispels Flame guard.

He relies heavily on right clicks making Untouchable very effective against him. If he tries to run away Impetus will do huge amounts of damage.

Since untouchable pierce Spell immunity, Lifestealer cannot burst her down even with Rage meaning she can heal herself back to full HP.

Against her Untouchable, Sven is barely able to hit Enchantress even with his Black King Bar.

Enchant can control Beastmaster's boars, mitigating his effectiveness during the laning stage and teamfights.

Enchant dispels Overpower. Enchant slow can help kite Ursa in fights and also in lane. Enchantress can out harass Ursa in lane by using her long attack range and Untouchable, as well as out sustaining him with Nature's Attendants.

Static Link 's damage instants fully ignore Untouchable, combined with Eye of the Storm and high movement speed compared to Enchantress with no mobility, Razor can easily take away her squishy health pool.

Chen can use Holy Persuasion on creeps controlled by Enchant. Ironically, Enchantress can Enchant Chen's creeps.

Frostbite does 1000 magical damage to Enchantress's creeps and roots them for 10 seconds, which hinders her ability to gank.

Blade Fury dispels the slow from enchant, and can burst her down during the laning stage. Omnislash and Swiftslash's physical damage burst ignore untouchable. Silver Edge is a common item for Juggernaut for dealing with Untouchable.

Enchantress has pitiful HP, even more pitiful than Luna, so Lucent Beam and Eclipse will often harass and/or kill her through her Untouchable. With Moon Glaives, Luna can clear Enchantress's creep wave efficiently.

Vendetta breaks Untouchable and deals great damage against her. Enchantress' lack of mobility makes her a primary target for ganking with Vendetta. Spiked Carapace can reflect Impetus and stun Enchantress. Mana Burn can deal tremendous damage against her due to being an Intelligence hero.

The burst damage from Timbersaw's abilities is more than enough to deal with Enchantress and her creeps. Timbersaw doesn't rely on his physical attacks, which makes Untouchable useless against him. Timber Chain can close the gap between them and minimize damage from Impetus. Be aware, however, that Timber Chain could work against him if used to escape. However, Impetus can ignore Reactive Armor if Enchantress is not a primary target for Timbersaw or if he is disabled.

Battle Trance and Fervor can help cancel out Untouchable.

Untouchable won't mitigate Venomancer's magical damage, and Enchantress is vulnerable to magic damage. Both Venomous Gale and Poison Nova lowers the amount of healing received by Enchantress and her allies from Nature's Attendants.

Windrun's speed allows easy pursuit or escape, while the evasion greatly reduces the threat of Enchantress' Impetus, especially when retreating. Shackleshot is a powerful disable if Enchantress gets too close to one of her own minions. Focus Fire negates Untouchable.

Blade Mail can turn Impetus against Enchantress since she has a low HP pool.

Spirit Vessel lowers the amount of healing received by Enchantress and her allies from Nature's Attendants.

Silver Edge breaks Untouchable for a couple of seconds.

The jungle monsters that help Enchan farm well and save health from the first level: Harpy Stormcrafter (with 4s cd lightning strike, pretty good dmg), Satyr Tormenter (with shockwave that spreads damage, aura heals, copper) good time to tank creeps), Dark Troll Summoner (creates 2 bones from enemy corpses, increases the ability to clear the jungle). The other big monsters only have big ass butts, the ability to clear the forest is quite slow.

Do you see the big bird Wildwing Ripper? It has the ability to cast a spell that creates a tornado, deals damage and lasts a long time, moreover, jungle creeps will not run away when hit by this ability. To take advantage of that, you should stack a certain camp (prioritize the large camp) then use the Wildwing Ripper to create a tornado to earn money, with Enchan the stacking is not too difficult because you already have a pile.

You should use many different types of jungle monsters to perform combos when ganking. The simplest is to combine Dark Troll Summoner + Centaur conqueror

Your ultimate skill is auto-cast, but if you're in lane, it's best to use the shortcut key to use it, which is orb-walk, so you won't be attacked by creeps in lane because they default. You use magic so you won't attack.

With heroes using multiple units, always remember: the TAB key is to transfer control to another unit.

Catch the necessary jungle monsters mentioned above, if you're unlucky you don't have these, just pick the biggest one to catch, you need to get to level 3 early to catch more monsters, then the ability to go jungle Your score will be increased, and ganking is also good thanks to having 2 disciples. Enchan jungling is quite economical in health and mana. Remember to clear runes regularly, make sure to see you and a bunch of bull-faced brothers, no one dares to be aggressive in the early game. Don't forget to stack camp to earn more money and exp. Enchan roam is also quite good, but still needs jungle monsters to make ganking more favorable.

This is the stage when you gank often. With the ability Enchant slows up to 5.5 seconds, you can pull your brother up and add 1 control skill (like Centaur, sweet potato, big Troll). Enchan's ability to push turrets is quite good thanks to the ability to capture minions and monsters, if possible, try to take down all of the enemy's Tier 1 turrets to control vision. Don't forget to keep an eye on and follow the Town portal scroll.

At this stage, you should accept to give up farming and go with your teammates to be able to participate in timely combat as well as push the turret. You and the rest of the team's support should assign each other warding as well as using Smoke of Deceit to ensure vision as well as hunt down important enemy targets to dominate the teamfights and take down towers. . Enchan's ability to initiate combat is quite poor (because the team is so slow) so it's best to let your team's initiator go first, you're just behind the buff, pull him up to fight and then release his skills. How to use it, I said above. Good luck!