Among the oaths of supremacy of the Slithereen Guard, there is a solemn oath that is repeated before every battle: the Slithereen never fails. In fact, this is not only an oath, but also a covenant that must be fulfilled. Because, all Slithereen who fail in the quest will be banished. The loser is not worthy of Slithereen blood.

Once the most revered warrior in the tribe, Slithice has commanded an army of her fellow countrymen over the years, wielding her fearsome voice as her most powerful weapon. Powerful, agile, and elusive, she leads her deadly army to protect the Deep Ones and the Suken city's hidden treasure and museum beneath the ocean.

However, in the final battle of the Crey campaign, when faced with the army of the Levianth-the worshipers of Maelrawn who wanted to steal treasures to offer to their god, her army was consecutive. pushed back. Experiencing a persistent and bloody attack, after repelling the enemy and clearing the battlefield, they suddenly discovered that the treasure was missing a jewel-encrusted holy grail, the only one. At that time, Slithice's army of 100 men had only a few survivors, but their bravery and sacrifice were not appreciated. It is important that the museum was stolen. Their honor was ruined.

Naga Siren was banished. Banished to find the stolen holy grail. Although she could make up for it with a hundred times more gold, she still had to live in exile until she found the stolen museum. The honor she had lost, no other gold or silver could compare. 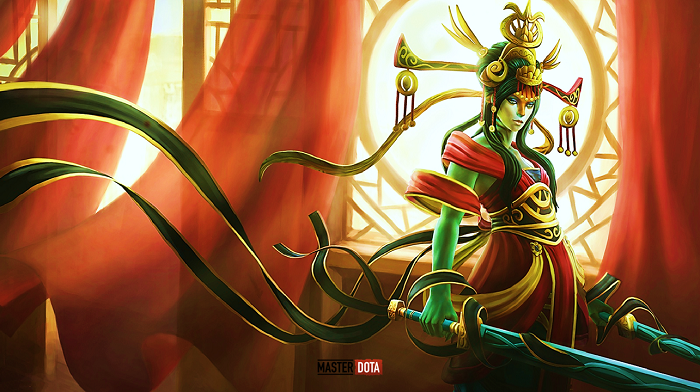 With the above skill increase, you have the main source of damage from the beginning of the game is Rip Tide (E) to farm a large area (3 clones, 1 time using Rip tide is a large area), get 1 point Ensnare (W) at the first level to have the ability to control and maximize the 2nd, when there are not many puzzles, the hand damage is not high, the Naga clone doesn't have much dmg so it should be maximized last ( get 1 point at the beginning of the game to spread Rip tide), ultimate gets the right level to chase, gank and escape when in danger.

Effect: Naga disappears for a moment and then reappears with 3 fighting clones under her control.

Duration: 30 seconds or until destroyed

Effect: Naga throws a net at an enemy target and immobilizes them for a period of time, and cancels the target's channeling state.

Note: when using the ability, the clones will also throw nets like naga but without additional effects.

Note: Naga's clone will also use Rip tide when Naga uses it, dealing the same damage and effects but not stacking.

Song of the Siren

Effect: sings a song that puts all nearby enemies to sleep (including buildings), however they will not take damage from any source. This skill has an extra skill to end the effect earlier.

Radius of Influence: 1250 around Naga

Song of the Siren End

Effect: Release enemy units from your song so they can be targeted again.

Bottle: When farming the mid lane, a bottle can aid with sustain and rune management.

Octarine Core: Naga Siren's skills' cooldowns are reduced by Octarine Core, dramatically increasing her pushing strength and making her considerably more difficult to gank. Lifesteal has no impact on her own abilities, but it may be coupled with Radiance to make her illusions immune to creep damage.

Magic Wand: The Magic Wand offers attributes as well as bursts of life and mana, making it a strong sustain item regardless of Naga Siren's function.

Arcane Boots: Naga Siren's early mana concerns are solved with Arcane Boots, and you may deconstruct it later to recycle the Energy Booster into Octarine Core.

Drum of Endurance: Naga Siren, allied heroes, and illusions around her gain good overall characteristics and an active that improves mobility and attack speed.

You can use clones with Rip tide to eat minions from afar, use clones to stack jungle camps, and check visibility. Clones last up to 30 seconds, so you can feel more secure when controlling the lane, but you should know how to coordinate mana when traveling, lest bad or good cases happen that you don't have enough mana to participate. so sorry.

There is a very tricky game with Radiance that you clone and split, pull the clone up to push the lane, and the main body can farm in the jungle without fear of being stalked because your lane's soldiers are always high. , takes a huge advantage in vision, controlling vision in other locations will become simpler with the rest of the clones, it's easier for your teammates to go to wards than to take care of them. your area (this requires high microphone capabilities).

At the beginning of the game, you are not capable of being aggressive without the support of your teammates. When you have all 3 moves, then your life will be a little more comfortable. This phase is still mainly about sticking to the minion farm, if you are pinched, you can use the game I mentioned above to farm as well as stack jungle monsters. You shouldn't do anything in this stage, sometimes if your teammates go to gank, they will run out and throw a net and then hit a few times to get support or get kills if possible.

This stage, getting to Radiance is a very nice transition for you, you can coordinate the clone to farm a clean lane with the jungle for a while, remember to split the clone to maximize the effect of Radiance, yes. What combat is just screaming and dragging the clone to burn the enemy heroes' ass to get support. And if you don't farm and can't get to Radiance early, you can build in method 2, then go farm and fight to earn some money on items, Radiance can be for the late game. Remember to ask your teammates to have full wards and always have the Town portal scroll ready.

With teammates to control the map and Roshan or Split push (split push), you need Boots of Travel to be able to maximize that ability. In the total teamfight, you will usually be the one to come in later or you can help the Initiators open the fight with Song of the Siren (use it carefully to avoid squeezing them), otherwise just Split push, Naga is too good at this, Just apply the game in the mid game and they will tickle right away. And if you think it's cowardly, ok! Go up, throw the net, clone, turn on the Manta and kill them all.