"I'm not a lumberjack. This is personal."

In his mind, Rizzrack could still hear the screams. He worked furiously, turning wrenches, twisting screws, constructing, carving, and forging. Sleep eluded him; all he did was build. Months had passed since he'd locked himself away in his uncle's workshop, and his deliverance was almost complete. As his eyes closed, he saw a blanket of flowers floating on the calm waves of Augury Bay before exploding into a cloud of pollen that silenced lives as it seized the lungs. With a choking start, he awoke. The rhythmic sound of a whetstone filled the shop for hours as he sharpened a set of massive blades, his mind racing with images of strangling vines garroting neighbors and enwrapping homes. Augury Bay's flooding had been nothing compared to the violent horrors that had taken root beyond the city walls.

But, he reasoned, the saw-suit would make him strong and safe, allowing himself this glimmer of hope before the full force of his fear slammed into his fading mind. Branches, bark, and blood Rizzrack fled the city as trees that walked, fought, and killed. The gates had been shattered, and trees had swarmed into the city. Trees had crushed, thrashed, and stomped the last defense Augury Bay had, and stalked the few fleeing refugees. Rizzrack unspooled the thick chain from the suit's arm in hushed silence, his hands trembling as he inspected each link and ran a trembling finger along the claw attached at its end. The saw-suit was all set.

He sparked the bladed machine with his trembling hand. Terror drove him, terror of what lay ahead and of what he would have to face in order to have any hope of calming his mind. He knew he had to face this fear as the saw-suit shuddered to life, and he knew he wouldn't like it one bit. 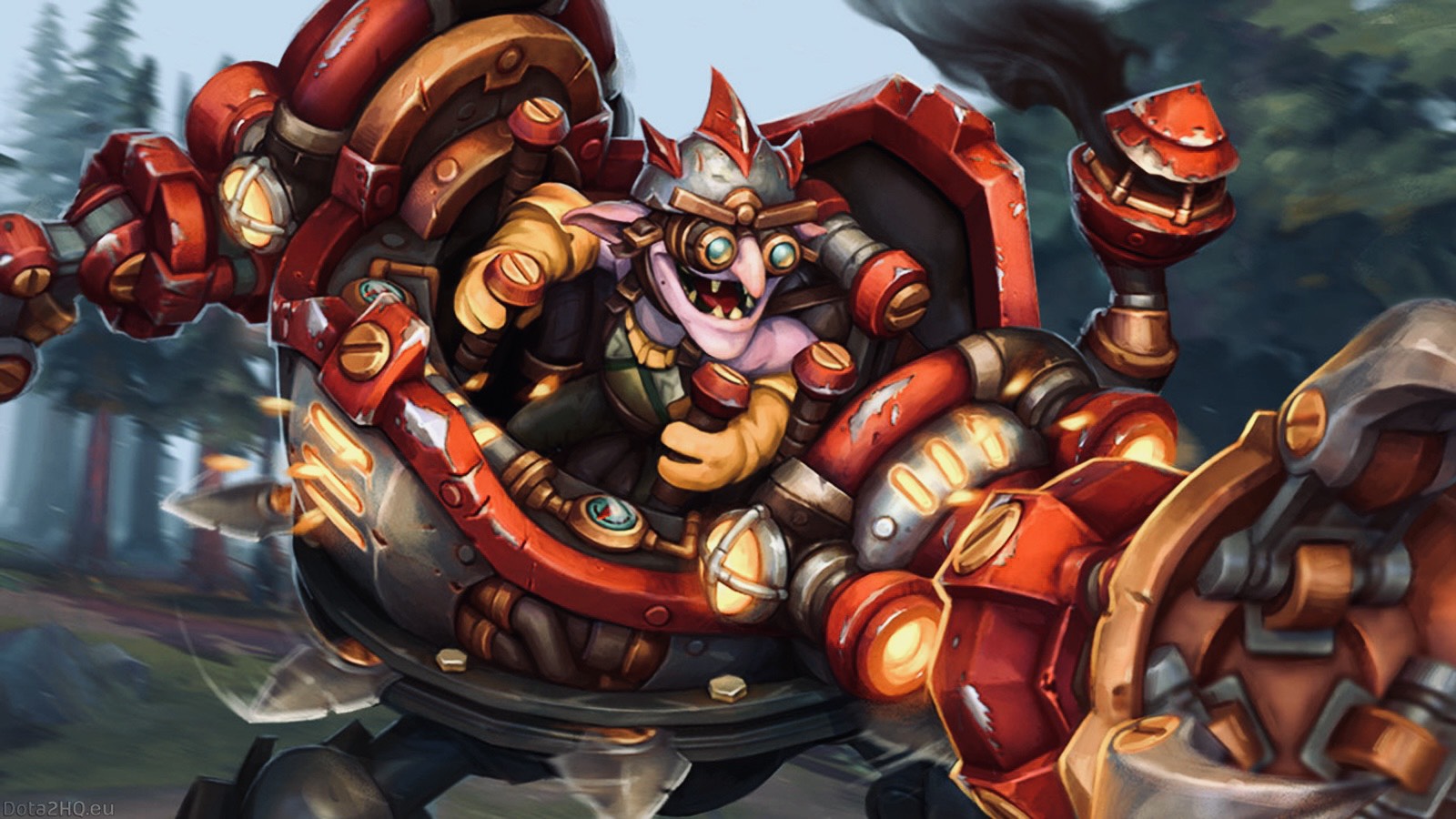 Build a durability item immediately after Bloodstone, which is useful in the mid-game (mek, drum, vanguard, blade mail). After that, get BoTs and Necro. If you have a lot of gold, you can get a good late game durability item or an orchid if you really need one.

Effect: Timbersaw whirls extremely sharp edges, injuring enemies and destroying trees in the area around him. When an enemy hero is affected, it loses some of its primary attribute for a brief period of time. Whirling Death will deal additional damage for each tree destroyed.

Effect: Timbersaw fires a chain that embeds itself in the first tree he hits, luring him in. Any enemy in the way is damaged.

Effect: Timbersaw gains increased health regen and armor every time he is attacked.

Effect: A flame is released in the direction Timbersaw is facing. A debuff that deals damage per second and slows enemy movement speed is applied. Reduces the damage to buildings.

Effect: Fires your main saw blade at the target location, spinning in place and dealing damage in the area around it. For every 5% of health lost, enemies caught in the saw blade will move more slowly. When fired and retracted, the blade deals damage and cuts down trees in its path. The ability costs mana while active, and you lose the ability to attack.

Soul Ring: Timbersaw needs strength and mana to survive and use his abilities.

Arcane Boots: Timbersaw prefers these boots because they increase his overall mana pool and provide him with a periodic boost of mana for both himself and his team. He can disassemble them to use the Bloodstone Energy Booster.

Hood of Defiance: Timbersaw is immune to magical damage. Hood, in conjunction with Reactive Armor, makes Timbersaw difficult to kill in the early to mid game.

Bloodstone: Timbersaw's abilities can be sustained due to his excellent mana regeneration. Furthermore, it grants him slightly more health, health regeneration, and the ability to heal himself, which is always beneficial for a hero who must go deep in battle.

Lotus Orb: Gives you good armor, disables enemy heroes, and discourages them from casting spells on you. In times of need, it can also be used on other allies.

Shiva's Guard: Timbersaw is significantly more durable as a result of the large amount of armor it provides. The high level of intelligence it provides is also very useful, as Timbersaw requires a lot of mana and mana regeneration to function properly. Timbersaw's active ability also assists him in killing his opponents because the slow allows him to be more precise with all of his spells and adds another nuke on top of that. Timbersaw can also be a good initiator with Shiva's help.

Aghanim's Scepter: Timbersaw now has a second Chakram, allowing him to scale much better into the late game with even more damage output. However, the mana cost of a second Chakram will quickly deplete his mana; thus, a mana item such as Bloodstone or Scythe of Vyse is required before picking up this item.

Aghanim’s Shard: Unlocks Flamethrower for additional area damage and a slow to keep enemies within reach.

Blade Mail: Timbersaw can use his enemies' damage against them. It also provides him with some armor and 22 attack damage.

Eternal Shroud: To improve his survivability, he builds from Hood of Defiance and gains mana from blocked spell damage and spell lifesteal.

Scythe of Vyse: Timbersaw's ability to disable a single enemy hero allows Timbersaw and his team to completely destroy the targeted hero.

Linken's Sphere: Can be useful in certain situations against heroes with powerful single target spells.

Pipe of Insight: Provides Timbersaw with a significant boost to his magical resistance, which can be very useful against a team that can deal a lot of magical damage. Furthermore, this item provides a good amount of health regeneration.

Orchid Malevolence: If an enemy is disabling, silencing, or blinking away from you, this can be a good pickup. In addition to the silence, the item grants Timbersaw more mana regen and a larger mana pool, as well as increased damage output with the burst at the end of the silence. Timbersaw becomes extremely fearsome when combined with a Blink Dagger and can easily punish anyone out of position.

Rod of Atos: The increased Intelligence attribute intelligence allows him to cast more spells that deal more damage, and the health increases his survivability. Timbersaw's spells will be more effective with the help of Atos' root.

Heart of Tarrasque: Timbersaw gains additional health and strength. Timbersaw benefits from passive health regeneration as well, as it allows him to use Timber Chain to flee his enemies and then gradually regenerate his health back to full.

Spirit Vessel: Timbersaw's healing from Reactive Armor is reduced by this effect.

Orchid Malevolence: Timbersaw's mobility and damage are negated by its silence. This can also be upgraded to a Bloodthorn to help you pierce his thick armor.

Black King Bar: Because none of his abilities pass through Avatar, he's a good pick for carries.

Scythe of Vyse: Because its cast time is instantaneous and difficult to counter, is an effective way of quieting Timbersaw.

Diffusal Blade: Timbersaw's mana is depleted, negating nearly all of his strengths by removing his abilities.

Silver Edge: Timbersaw is unable to build stacks because Reactive Armor's passive bonuses are broken. It should be noted that this will not remove any stacks he has already obtained.

You'll have some mana to use after you get your Arcanes and level 6, and hopefully your gank went well and you're on your way to Perseverance. Make sure you have a tp scroll and get stuck in some farm, take a couple camps, preferably in the enemy jungle if you can do it safely, but don't try to rinse the jungle because you'll just have to base.

Because you are all AoE, you should be stacking camps in your jungle if you go there to farm, as you can clear them with the same amount of mana and in the same amount of time as a normal camp. If you have some mana to spare, and you can definitely pick up a clarity or two to do so, stack a large camp in your jungle once or twice and clear it. This can help you farm faster and get your Bloodstone faster; however, don't take too much farm from your carry.You should alternate between being in lane getting exp and farming, ganking, or possibly taking a stacked camp if there is no other option. If you're close to your bloodstone, you won't be able to do much or help much at the moment, so finish up your stone in the jungle.

If possible, use the opportunity to clear an enemy camp. (Definitely take enemy stacked camps by a tinker or a tiny wisp - these are probably worth dying for if you can clear them.)

When you have your bloodstone, hopefully within the next 20 minutes, you can begin bombing around clearing spare camps, ganking and fighting, and clearing creep waves to push. Always look for opportunities to be productive; if none exist, stack a camp and clear it. You won't have to base with this item, so you can move around the map looking for ganks or pushing lanes while also contributing to what your team is trying to accomplish. If necessary, obtain an appropriate durability item.

Mid-game team fights are the most influential parts of the game. You can decimate them with your AoE pure nukes flying everywhere with no mana concerns, just don't start clicking buttons, think about what you're doing before and during a fight, hit as many as possible with your nukes, and move to and from good positions. You'll often be able to flee if the fight goes badly; look for when the fight is lost and can't be saved and get out of there, but don't just abandon your team in a close fight. Simply deny yourself with bloodstone if you are truly bugged.

You must participate in every fight in the middle and late game. If you encounter magic immune targets, such as an enemy carry with bkb, simply target someone else for the duration. Keep in mind that your necronomicons have true sight and can cripple casters with mana burn. In fights, you will be able to quickly take down support, so do so.