“Be still your beating heart.”

During the plague outbreak, a mysterious priest with a penchant for dark magic named Rotund'jere was promoted to the rank of Cardinal thanks to the sudden deaths of all the high priests. While the other members of the order set out to join hands to stop the plague, the newly ordained cardinal lurks inside Rumusque's Basilica, busy plotting a plan to plunder the fortunes of the nobles. dying here. He promised to give them rewards in the afterlife if they agreed to hand over the earthly inheritance to him.

As the pandemic receded and was confined to a few places, his actions began to attract the attention of the high priests. They convicted him of heresy and sentenced him to hard labor in the plague-ridden region, and imbued him with spells to ensure that he would slowly languish in the disease. But the priests did not take into account his innate immunity. Rotund'jere contracted the disease, but instead of killing him, the plague nourished his powers, transforming him into a complete plague of magicians, a Plague Pope. Naming himself Necrophos, he traveled the world, spreading plagues wherever he went. With every village that was destroyed by plague, his terrible power multiplied. 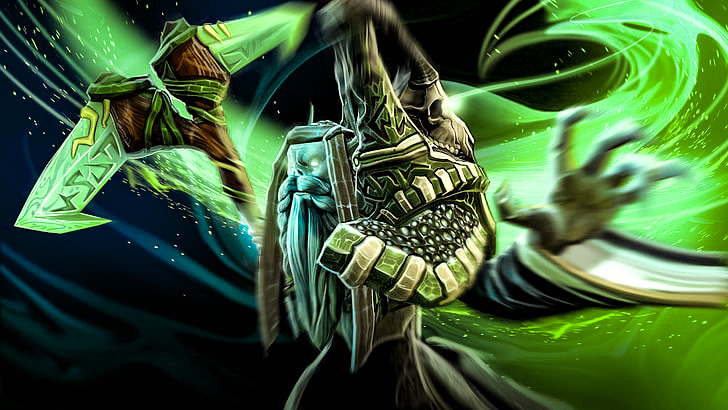 At the first level, when you go to the lane, get 1 heartstopper aura (W) first to enjoy the light but highly effective job of poking the enemy's blood, as long as you stand in one place without hitting, the opponent has already. After losing all the blood, they will be very inhibited when tango with healing salve keeps going (not to mention you hit, creeps attack) then max Death pulse (Q) and Sadist (E) to get can stay in the lane, exchange moves aggressively, create favorable conditions to plug Reaper's Scythe (R) into the enemy's head, why it dies with that skill is an extra 30 seconds of extremely annoying counting.

Heartstopper aura (W) is maxed out last because in the mid and late game this skill is fully effective because the enemy's health is already quite good, just a few seconds of combat and you can Can build a large amount of blood, not like going lane (in lane, the trigger time is very long, so just 1 skill level is enough). Ultimate will of course get the correct level.

Effect: Stabs a deadly scythe at the target enemy champion, stunning the target for 1.5 seconds, then the scythe swoops down dealing damage based on the target's missing health. Targets killed by this skill gain 30 seconds of counting.

Note: Enemies that die within the duration of the scythe before slamming down (1.5 seconds) will still receive 30 seconds of counting.

Bonus Effect: Blocks the buy back of the person killed by this skill.

Effect: Necrophos enters the region that exists between the living and the dead. He can't attack or be attacked, therefore he emits an aura that slows down foes in his vicinity. In this form, he suffers more magical harm, but his healing abilities are enhanced.

Effect: Sends forth a huge, fast-moving Death Pulse towards the designated adversary or ally, turning them ethereal for 2.5 seconds. Enemy magic resistance is reduced by 25%. After impact, it spreads to adjacent foes and friends.

Magic Wand: Necrophos can survive or have enough mana to utilize Death Pulse or Reaper's Scythe thanks to Magic Wand's burst life and mana, which Ghost Shroud may enhance.

Power Treads: Necrophos may use Power Treads to swap between intellect and strength for mana and health.

Arcane Boots: Arcane Boots, when combined with Necrophos' inherent regen, let him maintain his mana, and they eventually turn into Guardian Greaves.

Guardian Greaves: Guardian Greaves provides Necrophos with a powerful burst heal and mana regeneration, especially when combined with Ghost Shroud, allowing him to support his team for longer.

Force Staff: Intelligence, health regeneration, and escape are all provided by the Force Staff. It may be used to save yourself and your teammates, or to force hostile heroes to join your team.

Radiance: Heartstopper Aura and Radiance work beautifully together. It will assist maintain your lanes clean of enemy creeps and boost your presence during teamfights.

Shiva's Guard: The aura of Shiva's Guard slows the enemy's attack, while its active ability gives foes a slowing debuff.

Scythe of Vyse: Scythe of Vyse provides beneficial qualities as well as mana restoration. Its disable makes killing a powerful carry or a bothersome support/initiator much simpler.

Blink Dagger: For a Necrophos who wishes to initiate on adversaries or pursue down fleeing enemies, Blink Dagger is handy. In the late game, he can also upgrade to Arcane Blink for more teamfight effect.

Veil of Discord: Veil of Discord is an excellent early-to-mid-game item that increases spell damage while also improving armor for durability.

Rod of Atos: Rod of Atos is also a strong contender for Necrophos. With a brief cooldown, it provides healing, intellect, and a long-range root.

Spirit Vessel: Spirit Vessel is also a good option. It gives increased health, some extra stats, and mana regeneration; the active Soul Release has excellent synergy with Necrophos' skill set because it deals damage based on current health and reduces enemy regeneration and healing; when combined with death pulse and Heart Stopper Aura, you can bring a hero down to the Reaper's Scythe threshold in a matter of seconds. You may also use the item to heal yourself or your teammates.

Blade Mail: If you become concentrated in fights, Blade Mail is an excellent choice. It's preferable if you're ahead of your opponents in terms of farming and/or levels, as you're not as tanky otherwise.

Pipe of Insight: Pipe of Insight provides much higher life restoration and enhances magic resistance, which is notably useful in combating the magic weakness caused by Ghost Shroud.

Eternal Shroud: If your squad already has a Pipe holder or you're dealing with a lot of magical damage, Eternal Shroud is a good option to Hood of Defiance. Death Pulse works nicely with the spell lifesteal. If you buy it with Radiance, you'll get a healing per second when you're near foes.

Ghost Scepter: To counter opponent dispels, the Ghost Scepter can be acquired. You can use Ghost Scepter to stay resistant to physical harm once they've dispelled Ghost Shroud. It also becomes an Ethereal Blade when you improve it.

Lotus Orb: If Necrophos becomes a high-priority target for the adversary, he can use the Lotus Orb.

Tarrasque's Heart: Tarrasque's Heart makes you a lot more tanky. If the adversary possesses extremely mobile heroes who inflict a lot of damage, this is a must-have equipment.

Nullifier: During the duration of Nullifier, Ghost Shroud is rendered fully useless.

Glimmer Cape: The Glimmer Cape may drastically diminish the damage dealt by Reaper's Scythe. Because Necrophos frequently uses Reaper's Scythe when his target is slightly below half health, the additional magical resistance is usually enough to keep them alive.

Wind Waker: The Legend of Zelda: The Wind Waker may also be used to save an ally who is stunned by Reaper's Scythe.

Lotus Orb: Reaper's Scythe is reflected back to Necrophos by the Lotus Orb. Most of the time, Necrophos' ultimate will not kill him back because he'll be performing it at full health, but it will stun him for 1.5 seconds due to spell immunity, stopping him from retaliating with more of his own damage.

Linken's Sphere: If there are no other abilities that can squander Reaper's Scythe, Linken's Sphere makes it impossible to cast it on a target.

Black King Bar: The damage from most of Necrophos' abilities, notably his ultimate, is ignored by Black King Bar.

Scythe of Vyse: Scythe of Vyse is a more powerful counter than the things stated above, preventing not only his abilities from being cast, but also his goods that might either heal him more, clear the debuffs, or aid him in his escape.

Dagon: When Dagon uses Ghost Shroud, he does huge damage to Necrophos, and when he uses Ethereal Blade, he is mainly slain in seconds.

Necrophos is quite passive at the beginning of the game without any equipment, so you just play in a safe way to farm last hit, limit the exchange of skills, moreover with Heartstopper aura, the enemy's blood poke with you is very light and comfortable. It is necessary to acquire a few basic equipment so that you can play more actively in this phase. When you have the ultimate, then consider ganking lane or playing more aggressive in your current lane.

This stage is the stage when you and your team as well as the opponent start ganking, pushing and small combat (unless your team or opponent plays turtle farming, just stay passive in one place and farm) Reaper's Scythes are intended for high farm targets (nuker, carry, initiator) to increase their countdown time, which will make them very slow to spawn, as well as ensure safe time for the team you push when the opponent is short of people but wait forever and can't see the respawn.

Necrophos's ability to farm and gank is quite good, so the balance between gank and farm is not too complicated like other heroes, just have Reaper's Scythe and you'll go gank okay, and the cooldown of this skill is pretty fast too. Remember to bring the Town portal scroll regularly during this phase.

This is the time when Necrophos unleashes his full potential with his skills and equipment. Except for support, you can plug Reaper's Scythe into any other enemy, deal enough damage for the opponent to be killed instantly, the opponent will not be able to buy back and the countdown time on the board is extremely long with equip Aghanim's Scepter (I usually see it over 100 seconds in this phase). That will put a lot of pressure on the opponent when just a little negligence will not have the opportunity for them to correct the mistake thanks to the buy back.

You try to stay in place in teamfights because your teammates need you to live until the middle or end of the teamfight, when you've used up your skill set and Reaper's Scythe kills the target for maximum damage. for the opponent. Necrophos is one of those heroes that has the ability to flip the bets terribly.