-4 Tricks of the Trade Cooldown

Tricks of the Trade Applies a Basic Dispel

"There are none so stabbed as those who will not see."

Riki was the middle child of the powerful Tahlin dynasty. Riki, the small middle son, appeared destined for the art of invisibility with an older brother being trained for the throne and a younger brother being pampered and kept. On the night his people were betrayed and his family was massacred, he developed an art that ultimately saved his life. He was the only member of the royal line to escape; he was small and agile, unassuming, and used smoke as cover. Using the benefit of surprise, he quietly slit the throats of one enemy warrior after another as he made his way out of the royal grounds. Now that he is free of his royal duties, Riki applies his skills to a new line of work: stealth assassination. He subdues his adversaries while honing his abilities in the hopes of one day exacting revenge on those who murdered his family and stole his birthright. 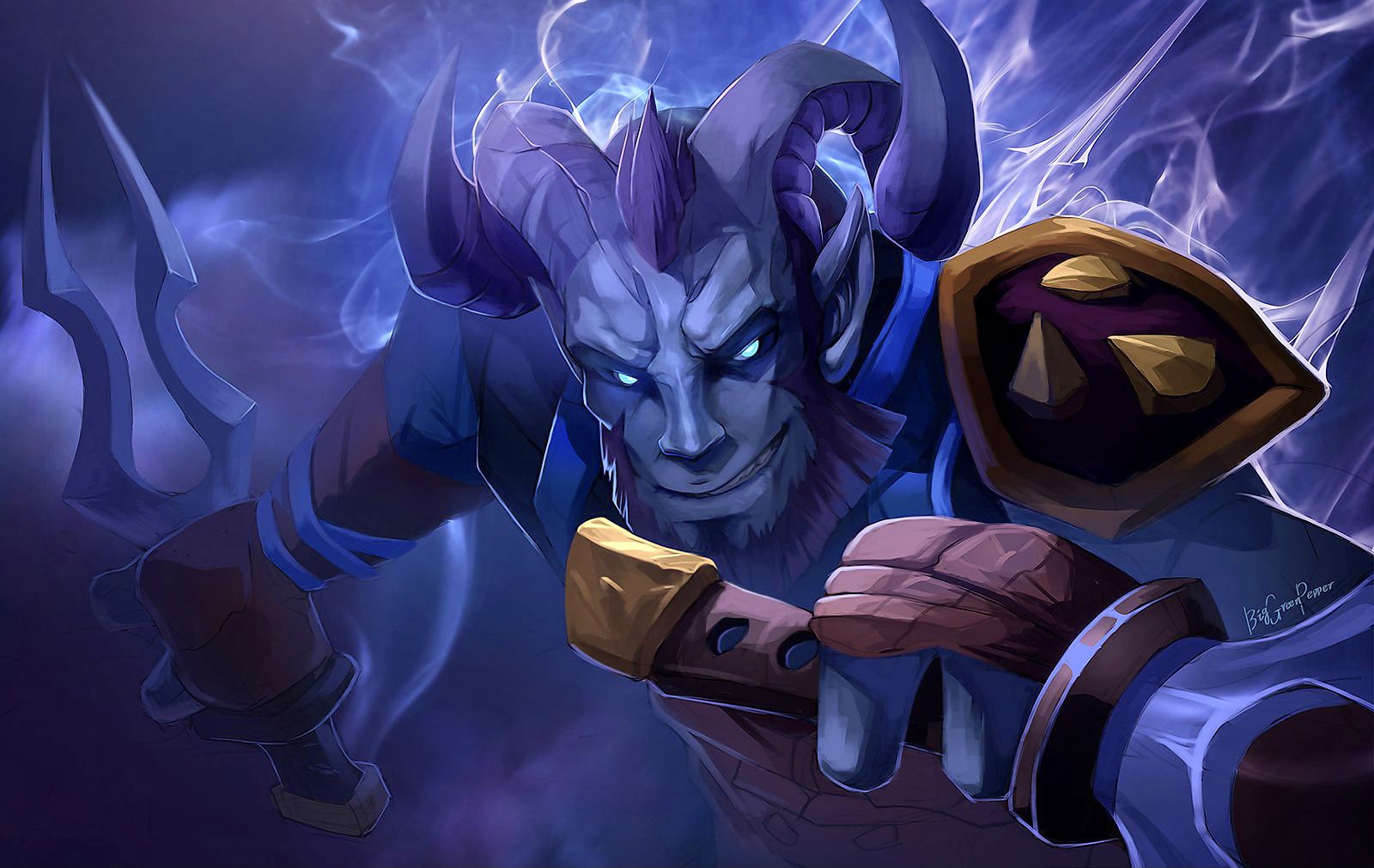 When jungling, you should start by using your smoke screen, which, depending on your skill level, will cause monsters to miss frequently and, if they have a stun skill, will silence it. You can gain the extra gold or experience you need to unlock your next skill or item by going jungle.Riki is great in team battles; he will put an end to escaping foes or simply use Smoke Screen to assist your team in taking down a number of foes. Due to his value in team battles, Riki excels in Team vs. Team competitions. He will become strong enough to defeat almost any foe he comes across in the middle or late stages of the game, making him THE ULTIMATE ASSASSIN. Therefore, be sure to ban Riki if no one on your team intends to use him before the opposing team chooses him.

Effect: Hurls a smoke bomb at the enemy, distracting them and preventing them from attacking.

Effect: Teleports behind the target unit, temporarily slowing them, and, if it's an enemy, dealing extra damage.

Tricks of the Trade

Effect: While attacking arbitrary enemy units in the vicinity of him from behind, Riki phases out of the world.

Effect: Hurls a dart at the intended adversary, knocking them unconscious. At the end of the time frame or if they sustain too much damage, the target will awaken. The target suffers damage and is slowed after awakening.

Effect: Riki vanishes into the darkness and disappears. Riki always deals extra damage to his adversary when he attacks them from behind, according to his Agility. Riki is visible when he attacks.

Magic Stick: Replaces your consumables with a different source of recovery, which is especially helpful if the opposing team has heroes who depend on skills.

Boots of Speed: Give Riki movement speed so she can follow escaping heroes while Blink Strike is on cooldown.

Power Treads: Give Riki an additional attribute bonus and increased attack speed to help increase the damage done by Cloak and Dagger.

Diffusal Blade: Gives casters the ability to burn mana for additional damage while slowing heroes who are fleeing and keeping them in Smoke Screen. Additionally, it increases agility, which raises the damage of Cloak and Dagger's backstab.

Skull Basher: Gives more strength and damage, which is always nice on a right-click hero like Riki who moves in for kills. The Bash is also helpful for keeping adversaries inside the Smoke Screen.

Butterfly: Provides a significant increase in attack speed, damage, and survivability. Additionally, it increases your agility, which scales well with the backstab damage of Cloak and Dagger.

Abyssal Blade: Enables Riki to cancel channeled spells with its stun and bash, and to keep opponents in place even after they have obtained Black King Bar.

Nullifier: The slow movement of Nullifier keeps adversaries inside Trick of the Trade. Additionally, the mute and dispel support Smoke Screen's silence and miss to further incapacitate adversaries and stop them from using defensive tools like Ghost Scepter.

Drum of Endurance: Is a good mid- to early-game purchase because it speeds up everyone and gives Riki attributes and mana regeneration.

Eye of Skadi: Enables Riki to take more hits, deal more damage, and use more skills by giving all-around attributes as well as a flat health and mana pool bonus. Additionally, it grants a potent, spell immunity piercing slow that will stop your target from fleeing.

Battle Fury: Gives Rikki much-needed Mana regeneration and can proc with Tricks of the Trade and Backstab.

Mjollnir: Can proc with Tricks of the Trade, but due to the item's 0.2 second internal cooldown, only up to once per strike.

Aghanim’s Scepter: Increases his potential in teamfights by doubling the duration of Tricks of the Trade and enabling him to cast it on an ally hero.

Sentry Ward: Is a common item used to combat heroes like Riki, dissuade him from traveling alone, and force him to invest in team detection.

Dust of Appearance: Not only makes Riki visible but also slows down his movement, making him extremely vulnerable because he is unable to turn off Cloak and Dagger. He will be compelled to spend money on a Manta Style as a result of this.

Gem of True Sight: Is Riki's worst nightmare, making him very reluctant to wander off in the dark or follow an enemy.

Book of the Dead

Book of the Dead: A more advanced neutral item In addition to the Necronomicon Warrior's true sight, Necronomicon can also pose a threat thanks to the bonus stats that its summons have.

Silver Edge: Nullifies Cloak and Dagger, reducing your damage and invisibility by half, and rendering Tricks of the Trade only partially effective. Even so, you are already at a significant advantage if you can find Riki and land the Silver Edge.

Force Staff: Can force the user or their allies outside of Tricks of the Trade's or Smoke Screen's range. Remember that Riki has two charges on his Blink Strike, so he can easily overtake you. Forcefully take the high ground, or immediately follow with other disable/escape techniques.

Ghost Scepter: Is another excellent escape tool because it shields Riki from all physical harm and creates a secure window for TP.

Shadow Blade: Can be used to flee, Riki can easily stop it with Dust of Appearance, further securing the kill.

I recommend that you begin with 2 Slippers of Agility and 1 Tango or Healing Salve. Get a Stout Shield as soon as possible to combine it with a poor man shield, which you can buy near the side lane shop (top lane or bottom lane). It can block some damage in the early laning stage, which may help you survive the harassment. Furthermore, it does provide some agi/damage which will help you in the early laning stage, and you may get a Magic Stick if the other side has a lot of skill heroes.

The items should be purchased in the following order: Power Treads first, Mask of Madness second, and Skull Basher last. Try your hardest to get them in 20 - 25 minutes; if you do, no one will beat you in a 1v1 situation, trust me. Bounty Hunter, your predator, can also be your prey (get a Dust of Appearance). You can use these items to roam around and kill anyone in a 1v1 or team fight. Go behind your prey, open your smoke screen, and then activate your Mask of Madness; after all, just chase him like there's no tomorrow. I doubt anyone will survive, so the squishy target will be your primary goal. Whoever was inside your smoke screen couldn't win you in mid game unless they had purchased Black King Bar or Monkey King Bar, both of which are extremely rare to have in mid game. After that, get a Yasha to improve your moving speed, damage, and attack speed.

Your opponent may purchase Sentry Ward as a result of your CRAZY ownership of Mid game. Appearance Dust and Gem of True Sight You will need a Black King Bar to survive; try to get it in 30-35 minutes.

After you obtain a Black King Bar, you can resume your mid-game strategy, with the person holding the gem as your priority target. With the most recent update, the duration of the Gem of True Sight CD has been increased to 10 minutes, making enemies reconsider holding/purchasing it.At the same time, it cannot be broken right now, so make sure to clear 1 slot for the Gem of True Sight in case you or your teammate manage to take down the Gem of True Sight holder.

Get a Manta Style after Black King Bar to help you push and confuse your opponent. Furthermore, you might get Abyssal Blade if someone bought Ghost Scepter or some late game hero that you need to take down quickly. Butterfly is the best item for Riki, but I don't buy it early on because it doesn't help you owning early on.Butterfly provides the most agi among items, and with the evasion provided and your smoke screen, they have virtually no chance of harming you unless Monkey King Bar is purchased. Butterfly will also increase the damage of the backstab skill.