”Let the sky tear down the unworthy!”

How could she be so lost? Once the ferocious leader of the Scourge of the Plains, commanding a horde of minions and beasts, daring to spread terror wherever she went. But now that she was far from her homeland, starving to the point of madness after several months of wandering, her army soon turned into piles of corpses, or even worse.

Then, when she stopped at the side of an ancient forest, from among the old branches, a pair of red eyes was silently watching her. Was a wild beast (The beast that Luna later rode, named Nova), beautiful and deadly, looking for a good meal in the late afternoon. Without making a sound, it silently turned and walked away. Indignant at being looked down upon, she clutched a rusted dagger in her hand, dashing toward the beast, only to regain a little bit of past glory. But her prey seems to be difficult to catch. Three times she cornered it between trees and rocks, and three times she caught its shadow before it shot like an arrow.

However, the bright moonlight above made the animal's footprints very easy for her to detect and follow. When Luna chased her to a high mountain, the great beast sat quietly, waiting intently for her. As she raised her dagger, the beast took a slight step back, then roared in her direction. Death had almost come to her in this strange land. Luna stood there, calm and ready to receive. However, in the blink of an eye, the beast suddenly rushed forward and snatched her dagger, then disappeared into the woods. At this time, everything became quiet, a few figures in a headscarf appeared and approached Luna.

With all due respect, they told her that Selemene, Goddess of the Moon, had chosen her, helped her, tested her: Luna had passed the sacred ritual of the Black Moon, the warriors of the Nightsilver Woods. She has two choices: join the Dark Moon and swear to serve Selemene, or leave this place and never return. Wanting to be forgiven and give up her bloody past, Luna did not hesitate and accepted a new identity: Luna of the Black Moon, Moon Rider, forever loyal to the Nightsilver Woods. 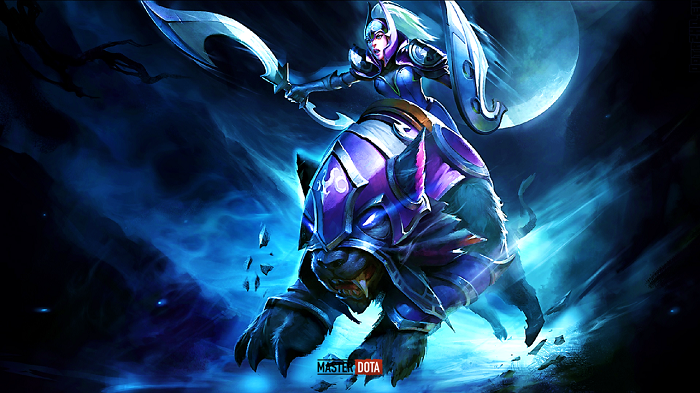 This is a common skill boost to get Luna's initial damage: easy last hit, low Lucent beam (Q) jerk, and ulti too poor. Why not get Moon glaive (W) from early levels? Simply because at first Luna has no damage, taking that skill point will initially be very wasteful, later when Luna has a big damage, it's fine. Ultimate get the correct level.

Effect: Each of her throws, her blade bounces to random enemies next to the main target 1/2/3/6 times (can bounce to old targets), however damage per The bounce is reduced by 35% compared to the previous bounce

Effect: Increases damage to herself and nearby allied champions by 14/22/30/38 and grants her greater night vision

Effect: Summons moonbeams that randomly descend on nearby enemies' heads and deal damage based on Lucent beam's current skill level. While using this ability, Luna turns day into night if used during the day for 10 seconds.

Magic Wand: Most heroes can benefit from using the Magic Wand to get additional burst health and stats.

Boots of Speed: Boots of Speed are essential for any hero that needs greater movement speed to hunt and escape.

Town Portal Scroll: The Town Portal Scroll is useful for easily jumping into conflicts from all around the map. Luna is one of the carriers who, owing to Eclipse, can alter the tide of battle.

Dragon Lance: The Dragon Lance is one of the most cost-effective tools in the game, offering strength and agility at a low cost.

The range boost is especially useful for Luna, as her own range is limited and she lacks any mobility options other than her fast movement speed to assist her get closer to foes. The equipment is especially important for pushing and battling in the early to mid game.

Manta Style: Manta Style is a key gear in most Luna games, providing her with increased damage, health, and movement speed. Manta Style's illusions are effective for pushing and improving damage output because they gain Moon Glaives as a passive.

Mask of Madness: With improved movement speed, attack speed, and lifesteal, Luna can farm neutral and lane creeps with Mask of Madness. In the late game, disassemble to develop Butterfly and Satanic.

Butterfly: Butterfly provides Luna with an excellent balance of strong damage and durability, as well as increased attack speed, damage, armor, and evasion.

Satanic: Satanic provides Luna with much-needed survivability, providing her with a burst heal that allows her to survive massive amounts of damage in battle.

Eye of Skadi: The slow effect will keep foes inside Luna's attack range, while the Eye of Skadi gives excellent attribute benefits that also aid illusions.

Aghanim's Scepter: Eclipse's max single target damage is increased by Aghanim's Scepter. It's fantastic when your team has a strong initiator like Faceless Void and the opponent team has few options for avoiding a long-range Eclipse.

The early game is when you should focus on farming, not being aggressive, you really don't have any defensive skills called high efficiency. Luna's gameplay is also quite boring like the Drow rangers, Dragon knights at all stages, because besides the farm farm with pushing the turret, Luna's gank ability is average poor with low mana and short attack range. (however, when you buy a bottle for Luna it's slightly improved, but still sida better than other pure gankers).

Luna is a hero that needs to farm a lot of items to be dominating, so if your teammates don't have anyone to effectively support your ganking, you just stick to the farm lane, earn lvl, have ulti. then pick up your ass and go get some lives and then farm again. Luna can go to the safe lane, solo mid is very good. Lucent beam (Q) is Luna's main damage skill in this phase, sometimes you can jerk the enemy's head to poke blood or finish the target if the opponent is negligent or you are supported by teammate.

This stage is the period when you farm intensively (or farm compensating if the early game is a bit slow). Ask your teammates to fully ward, pay attention to the mini-map farm for safety, or push the lane to take down the enemy turret. When the ultimate is ready, why don't you go get some lives for yourself, especially the guys who are alone on the enemy team like roamer, support, jungler.

Always carry the Town portal scroll with you in all cases to avoid unfortunate things happening and increase the ability to roam the farm lane, lick Luna's combat to earn chips.

This is the time when you need to follow the team, or farm near your teammates so that you can receive timely support or assistance. If you go to split push, ask your support team to fully ward to ensure life. In teamfight or home defense, you take a good position to shoot, grab Lucent beam (Q) and drop ulti, shoot anyone, because your 2nd skill will bounce to the rest of the guys. The most important thing is that you have to hit many shots (pay attention to turn on bkb and Satanic at the right time lest you break your mouth). And when pushing, it's very simple, aim at the pillar to hit, anyone who dares to step in will probably eat the bouncing knife.