Helm of the Overlord

The largest of the landed castes in the former country of Slom, Banehallow was born into a noble family and came from the house of Ambry. The house of Ambry was the first to rebel against the avarice of the crown before the Fall when the King's desires grew bizarre and his court grew overrun with sorcerers and charlatans. They dispatched 6,000 swords into the capital instead of continuing to offer honor and fealty, where they were killed off in the Massacre of the Apostates. The old adage, "When you strike a king's neck, you had better take his head," then arrived with teeth.

The king destroyed the huge Ambry dynasty out of wrath for the betrayal, only sparing the lord of the house and his youngest son, Banehallow. The King instructed his wizards to change the youngster into a wolf so that he may slit his own father's throat in front of the entire royal court, with the disgraced lord bound to the elaborate marble floor. The king instructed them to do this in order for Lord Ambry to recognize the bitterness of betrayal. The child was changed after calling upon strong magic. Although his physical form had been altered, his spirit was unaffected; as a result, he attacked his handlers and tore them to pieces rather than biting his father's exposed neck. Before they were able to drive the wolf into the night, a dozen of the King's knights were killed by its teeth. Even as the King stabbed him with his sword, Lord Ambry chuckled while he was imprisoned. Banehallow, the current heir to the slain house of Ambry, wanders the path as a Lycan, a hybrid of a warrior and a wolf, seeking recompense for everything he lost. 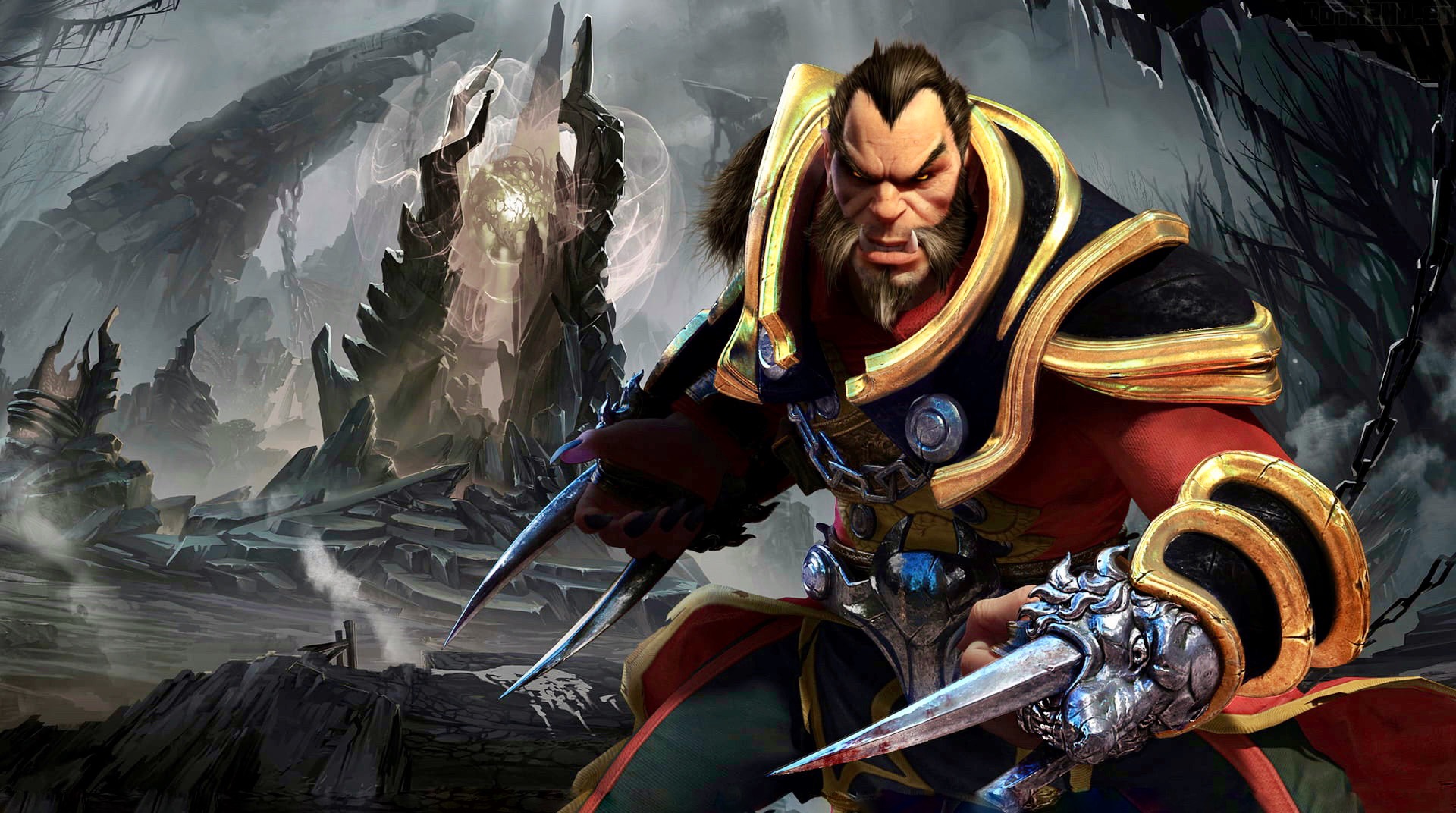 Due to the fact that wolves are how you jungle early on, generally speaking, maxing them out is a wise decision. Another smart move is to maximize the radius attack speed and damage, which will help you farm faster and affect wolves. Howl is a fantastic ability, but it typically shines in teamfights, so holding off on using it until teamfights are more common is a wise move. Feel free to move a point out of your passive and into Howl if you feel bad about not giving your team a damage boost. You can give your team the boost they need to get a kill by paying attention to the lanes, and you can also jungle more quickly.

Howl cannot be leveled because of the mana requirement. Although it doesn't cost much, every little bit taken away reduces your supply for wolves. Passive action is typically more effective for YOUR farm. However, maxed wolves with invisibility can be useful for purposes other than jungling. If you have sufficiently hurt the enemy during a gank or teamfight, they may grant you a kill. They may also bodyblock you if you need to flee, which is very useful if you need to leave the jungle to spawn.Shapeshift, a Lycan ultimate that grants extra damage, night vision, movespeed, initiation, and escape, is one of the best in the game. When maxed, it is a versatile ultimate with a brief cooldown.

Effect: Two wolves are called to battle for Lycan. Wolves at levels 3 through 4 have Permanent Invisibility, whereas wolves at levels 4 have Cripple.

Effect: Reduces armor and attack damage for all adversaries within 2000 range of Lycan and his wolves by striking dread into them.

Effect: Increases Lycan's and all of his controlled units' HP regeneration and damage.

Effect: An ally receives Shapeshifting abilities after being bitten by a Lycan. As long as they are within 1200 yards of one another, Lycan and the bitten target each gain 30% Lifesteal and share the healing benefits of Lifesteal.

Effect: Lycan transforms into a lupine, giving him and his units critical strikes and improved nighttime vision. Lycan and all controlled units move more quickly, are impervious to slowdowns, and have a 40% chance to deal a critical strike that deals 160%/190%/220% damage.

Boots of Speed: Give a basic increase in movement speed.

Blight Stone: Will decrease targets' armor, increasing wolves' damage output. It can develop into Desolator or Medallion of Courage.

Power Treads: Gives you the ability to switch to appropriate attributes and increases your movement and attack speed.

Helm of the Dominator: Controls a neutral creep that will gain from Lycan's skills as well.

Assault Cuirass: Reduces the armor of the adversaries (including their towers) while increasing the armor and attack speed of Lycan and his allies (including his summons).

Desolator: Increases Lycan's damage and enhances his tower pushing. Additionally, it works in concert with an Assault Cuirass pickup to produce a significant armor disparity.

Black King Bar: Provides increased power and momentary spell immunity so Lycan can destroy his targets without being concerned about being disabled.

Smoke of Deceit: Enables Lycan and his team to enter Roshan's pit undetected by the adversaries.

Armlet of Mordiggian: Provides bonus attack speed, attack damage, and strength to effectively increase the damage output of strength heroes. With health regeneration, armor, and the ability to switch on Unholy Strength to generate more health, it also improves survivability.

Vladimir's Offering: Gives armor, damage, and lifesteal in the form of an aura, making his wolves stronger as well. With his limited mana supply, the mana regeneration is also helpful.

Diffusal Blade: Slows the target, making it more difficult for them to defend themselves or run away from Lycan.

Heaven's Halberd: Increases Lycan's capacity for evasion, status resistance, and strength. He is also able to better combat enemy heroes thanks to the disarm and bonus attack damage.

Boots of Travel: Enables Lycan to teleport to lanes, push them down, or join allies in ganks in the late game. Any allying creeps, including your wolves, are fair game.

Abyssal Blade: Improves Lycan's lack of disabilities by offering a dependable stun and sporadic blows to lockdown a target.

Heart of Tarrasque: Increases health and health regeneration significantly, making Lycan tanks more efficient. Additionally, all of the damage it deals is strength-based, amplified by both Feral Impulse and Vladmir's Offering. Using Shapeshift, Lycan can leave a battle with extremely low HP and immediately rejoin it after a brief rest.

Aghanim's Scepter: Provides Lycan with the ability to use "Wolf Bite," which allows him to enhance an ally's Shapeshift hero by giving them increased speed, resistance to slows, a 40% chance to deal a critical strike doing 150% damage, and lifesteal. However, keep in mind that the Wolf Bite effect will end if the hero affected by it moves more than 300 yards away from Lycan. Additionally, the affected hero will have a melee attack if the ranged hero who is affected by the Wolf Bite ability also happens to be a ranged hero.

Town Portal Scroll: Is quite effective against Lycan because he lacks the disables necessary to prevent a Hero from teleporting away.

Heaven's Halberd: Is an effective defense against attacks, on which Lycan heavily depends.

Blade Mail: Lycan might refrain from attacking his victim if he receives return damage. If not, Lycan will sustain significant damage in return.

Rod of Atos: Restricts Lycan's range of motion during his ultimate.

Crimson Guard: Drastically increases a tower's ability to withstand Lycan's push and decreases the damage that his units deal to it.

Try to stay away from the spawn as much as you can in the early stages of the game. Depending on the camp spawns you receive, it might be necessary, but the more time you spend in the jungle, the better. It's also a good idea to stack one creep camp for later on when you're stronger. Keep in mind that your wolves are extremely vulnerable in the beginning. Pull it back and let the other wolf or yourself tank if one is becoming more focused because of the camp. This helps Lycan establish his dominance because it saves time and mana.

The best course of action for Lycan is to rush Vladimir's aura. It grants him and his wolves lifesteal and damage, both of which are necessary for a strong to survive in the jungle. Lycan should be able to gather the rest of his items with ease since he has the ability to quickly destroy camps.

Even though you can gank mid or safelane easily at Level 6, you should continue farming in the jungle for Power Treads, Vlad's and Boots, and Medallion of Courage. The effective snowballing of Lycan is greatly aided by a few early kills. You can kill Roshan by yourself once you have your Skull Basher.

The enormous damage boost and armor reduction can really help whether in teamfights or picking off that Sniper in the offlane because you can gank well at this point in the game with immortality and a strong pick-off game. The armor reduction stats on a Medallion can make it simple to take out an enemy in a few hits if you snowballed midgame and purchased one. You can easily solo Roshan, just like in the middle game, and you should be able to get the Aegis. The Cheese is great on Lycan because he can dive with it and maintain presence after he's been "nuked down," depending on how frequently you kill him, how long the game is, and how many items you've purchased.