“No business but war. No family but death. No mercy but the grave!”

Ever since he was an infantryman in the Red Mist legion, Mogul Khan had determined his goal was to become the army's general. Through countless battles, he has used bloody victories to assert his worth and position. Mogul Khan continuously advanced, thanks to his act of killing his superiors without hesitation. . Over the seven years of the Thousand Tarns (Campaign of the Thousand Tarns) campaign, he honors his name with bloody carnage, making his reputation brighter than ever. However, at the same time, his comrades were also dwindling. On the night of his final victory, Mogul Khan declared himself the new general of the Red Mist corps, also giving himself the title. "Axe". However, his army was only him, many people died in battle, but many more people died under Ax's hammer. It is obvious that, now, most of the The warriors all evaded Ax's leadership. But to him, that made no sense at all. Because, for Ax, the one-man army is the strongest army. 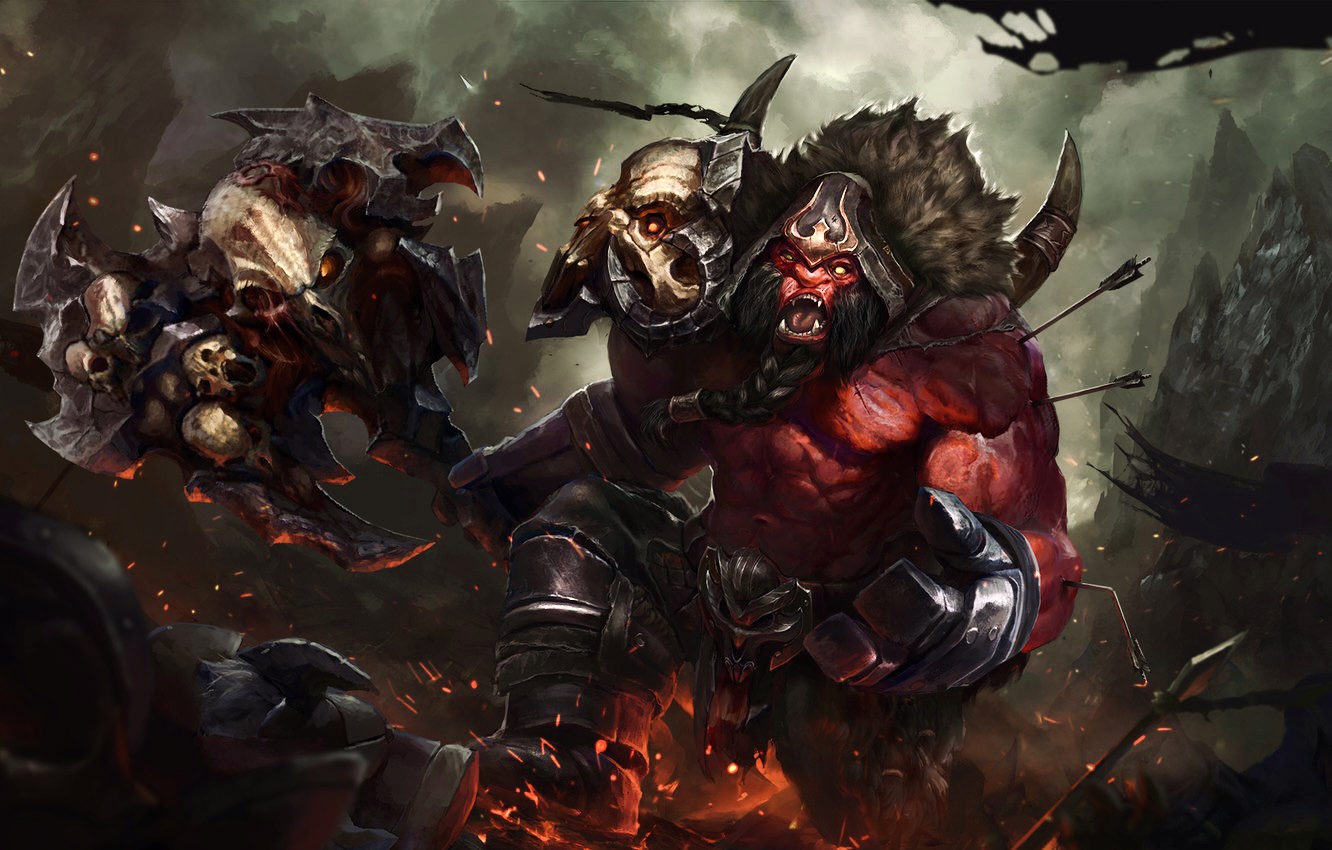 With jungling, of course you max out the Counter helix (E) to clear the jungle quickly is a good thing, that makes you money fast, buys the necessary equipment early (there is a match I play). got Blink Dagger at 7 minutes, of course got 2 kills in lane ). Maximize Berserker's call (Q) after maxing Counter helix (E) to better hold the enemy. When you have quite a bit of equipment and a little more mana, you continue to raise your Battle hunger (W) to support the pursuit of the enemy, build health and use the Culling blade (R) more accurately. Ultimate, of course, gets the right level.

Effect: Roars loudly, taunting all nearby enemies to attack him, and gain 40 armor for the duration of the ability.

Effect: Ax incites the enemy's hunger to fight, dealing damage over time, causing them to have to kill a certain object to end the effect of this skill. Also slows their movement speed and increases Ax's movement speed for each enemy hit.

Note: this ability works even if Ax is transformed into a chicken, pig or frog clone from Scyther of Vyse, Lion's Hex and Shadow shaman's Voodoo (a bit ridiculous). Only rotates when the attack has hit Ax (not counting misses).

Effect: swings a powerful ax to the enemy, dealing 150/250/300 damage, if the enemy is below 250/325/400 health, he will be killed immediately and the skill will not be timed. cooldown, and after the finishing blow, Ax and surrounding allies gain a large amount of attack and movement speed for a brief moment.

Bracer: The Bracer should be considered a minor item because it provides Axe with some magical resistance and increased health. It's particularly effective when you're ahead and doing well because it increases your strength.

Phase Boots: Because Axe does not develop much agility throughout the game while maintaining the speed increase, Phase Boots is an excellent alternative with four additional armor.

Tranquil Boots: Outside of combat, Axe gains movement speed and passive health recovery from Tranquil Boots. It's one of Axe's early options for boosting his mobility for early initiations and providing a source of HP regen to allow him to stay on the field rather than returning to base.

Magic Wand: Axe can use the Magic Wand to acquire burst health and mana during fighting, which is where he thrives the most.

Blink Dagger: The most crucial item for Axe is the Blink Dagger, which helps him to initiate and counter-initiate for his team.

Aghanim's Shard: Aghanim's Shard is a fantastic mid-game pick up that will greatly increase Axe's damage output throughout the game, as it improves Counter Helix, allowing it to proc on attacks rather than only while being attacked, while also slightly boosting the chances and improving attack speed. Because this Helix proc ignores the standard ability's cooldown and acts independently of it, Axe will be able to use Counter Helix frequently.

Blade Mail: Axe gains some damage and armor from Blade Mail. Any hard-hitting hero caught within your Berserkers Call will be severely punished by the active.

Town Portal Scroll: The Town Portal Scroll is required for Axe to participate in teamfights and ganks. His abilities as an initiator allow him to build up fights for his squad in a decisive manner.

Vanguard: Vanguard improves Axe's physical damage resistance by granting him greater damage block, more HP, and more HP regen. Although Axe shines against physical damage dealers and enables infinite jungling, it is not recommended for use as a jungler.

Black King Bar: If he faces a disabled-heavy lineup, Black King Bar may be a crucial purchase. He is a good target for concentrating down with magic nukes and stuns because he initiates straight into the midst of the enemy, therefore having spell immunity can help him to do more in fights and receive more uses of Berserker's Call of.

Crimson Guard: Crimson Guard, an enhanced version of Vanguard, is a powerful utility item that gives Axe even more resistance to physical damage. The added armor and characteristics, together with the current damage block and bonus HP, can make him exceptionally tanky, and he can further enhance his tankiness by using the active to protect his teammates.

Pipe of Insight: Axe may initiate without fear of strong magical damage, and he can march on the front lines to protect his team from such damage.

Urn of Shadows: Urn of Shadows is a good early-game ganking item that gives Axe a lot of advantages. Axe's HP and base damage improve as a result of the greater strength, while the passive mana regen helps with his mana issues. However, this is frequently obtained by a teammate.

Lotus Orb: The Lotus Orb is a powerful initiator item that allows Axe to punish adversaries that disable him. The item gives armor and increased regeneration, allowing him to be more tanky and restore his mana over time. The active can penalize foes who target Axe with single-target disables and nukes during an initiation, disabling and nuking them in turn, causing more havoc for Axe's squad to exploit.

Heart of Tarrasque: Axe's health and base damage are considerably increased by the Heart of Tarrasque, giving him far more power as an initiate because he can keep crippling the adversary as long as he is alive. He can also quickly restore his HP and jump back into battle if he manages to survive clashes and flee.

Shiva's Guard: Shiva's Guard significantly improves Axe's intelligence and armor, allowing him to withstand even more physical damage while also resolving his mana issues. During combat, the attack speed slow aura can substantially impede the enemy's ability to make physical attacks, while the active can be employed as a damage nuke and a slow to slow them down.

Boots of Travel: Axe gains increased battlefield and global mobility with Boots of Travel. The global teleport makes it easier for Axe to show up to fights and start clashes for his team, while the improved movement speed helps him to be more mobile on the battlefield, chasing down adversaries and inflicting Battle Hunger to slow them down.

Heaven's Halberd: The Heaven's Halberd is a powerful survivability and utility equipment that can assist Axe if the enemy's physical damage output is too much for him to bear. The increased strength and evasion provide him with extra health and resistance to physical strikes, respectively, while the active disarm allows him to totally stop an attacker from attacking.

Mjollnir: Given his role as a close-range initiator, Mjollnir is a good late-game buy on Axe. The item increases his attack speed significantly, making his physical attacks more hazardous and increasing the efficiency of his Attacking Procs Counter Helix skill. In teamfights, Chain Lightning deals AoE magical damage, and the Static Charge active can be used on Axe shortly before initiation to punish the enemy for assaulting him during Berserker's Call.

Bloodstone: On Axe, Bloodstone is a great buy. Counter Helix, Culling Blade, Blade Mail, Battle Hunger (as well as Chain Lightning and Static Charge of Mjollnir) all benefit from spell lifesteal and amplification, giving him tremendous survivability in teamfights. The item provides Axe with increased health and mana.

Vladmir's Offering and Satanic: Because of Satanic lifesteal, Axe is unable to use Culling Blade to kill foes.

Force Staff: Force A Berserker's Call can be dodged with the use of staff, or an ally can be pushed out of its radius.

Mekansm: Mekansm keeps allies' health over Culling Blade's threshold, and it can be utilized at the last time to entice Axe into a lengthy initiation.

You can start in a small pullable safe lane (Top with Dire and Bot with Radiant) when the meter hits 30 seconds from the creep spawn, finish that field and dodge until the second. 60 is one more yard there, after farming there you will reach lvl 2 and continue to farm other yards or go to lane to support your teammates if you are confident that you can get kills from now on, otherwise farm for a bit and then do it, you can use Berserker's call (Q) in some jungle situations to reduce the damage taken (especially in the big Hell bear and Satyr camps. ). Absolutely do not encourage you to block the enemy team's creeps, because it is quite risky and your teammates in that lane will be extremely lost.

Now is the time to do ganks and push with the enemy, with the surprise of the Blink dagger and the good retention of Berserker's call (Q), having teammates nearby and taking an extra 1 The creeps around you and the enemy champion, the ability to kill you and your teammates is quite high, you can use Battle hunger (W) to burn the enemy's blood slowly to make the ultimate alignment more accurate than copper. Time takes away 1 enemy movement speed. When pushing turrets, you can run up to block enemy creeps as they move out from the base, but this must be done with extreme caution as you can be cratered at any time while your teammates are busy pushing at the back.

Now you are the one who can start the fight well thanks to your Berserker's call (Q) skill combined with Blademail to deal the largest amount of damage possible to the opponent, the ability Berserker's call (Q) provokes both The enemy is in a state of Ghost form and is immune to magic (Spell immunity), so it's better to stick to the enemy carry and avoid letting it hit your team for free. When there is a near-dead enemy nearby, use Culling blade (R) to finish that target, gain movement speed and attack all nearby allies (if the enemy is running, you can slash at creeps) To get that ability, it would be better if you have Aghanim's Scepter because then the ultimate cools down to 6 seconds and the effect of the speed buff is increased to 10 seconds).