Summons a Golem on death

“My grimoire opens again to a new page”.

As head of the Arcane Archives at Ultimyr Academy, Demnok Lannik has always pursued rare books. As soon as he heard any rumors about where the book of primordial legends was hidden, he would immediately set off without any regard for his own safety.

He began to study the use of magic, with the same passion as he had been in collecting ancient books. And then, he became the mightiest Warlock in a shorter time than most of the other students.

Soon after, Demnok Lannik carved for himself a Staff of Darkness. Next, he summoned and sealed within it a spirit from the Outer Hells. With the hope that one day, he would recover all the lost magic books, Demnok Lannik began to create his own Black Grimoire. 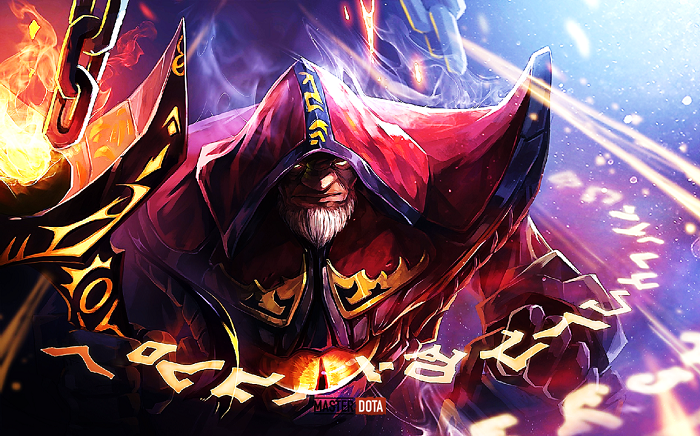 With the first build, you tend to be safe in lane, and at the same time, this build is very effective if in that lane you are completely passive before the enemy because they have terrible healing ability, and When harassing you very well, but Fatal bonds (Q) poke how much they heal quickly (typically heroes like Omniknight, Dazzle, Io, Witch doctor)

With the 2nd build, you can poke the enemy extremely hard with Fatal bonds (Q) if you align correctly to stick all the wave creeps and stick to the enemy hero. What if you chained the target with 3/4/5/6 other targets? It will be disastrous for the enemy for each wave of their creeps in lane. You heal very well thanks to Shadow word (W) without much worry. No matter how you build, you have to get the ultimate at the right level.

Effect: curses an enemy, this curse will jump to up to 3/4/5/6 enemy units around the target, creating a chain linking enemies together, making them feel take each other's pain every time one of them takes damage.

Damage taken: 25% of damage dealt to each target and does not stack with itself.

Effect: enchant an enemy unit or ally, if it's an enemy, it takes damage, if it's an ally, it heals.

Effect: creates a haunted land, any enemies who step on this land will be slowed down, the longer they stand on this land, the more they decrease their movement speed.

Duration of effect: 3 seconds after stepping out of the land.

Effect: Summons a Golem from another world to fight for him after an explosion, stunning all enemies in the area of effect.

Effect: Each Golem's basic attack has a 40% chance to deal 80/115/150 damage to the main target and surrounding area.

Magic Stick provides a burst of life and mana to Warlock, allowing him to survive or utilize additional abilities.

Boots of Speed: Boots of Speed increases Warlock's movement speed, allowing him to get into position to utilize Shadow Word or Fatal Bonds to secure kills or save friends in a timely manner.

Arcane Boots: Arcane Boots restores the mana of Warlocks and allies, allowing them to stay on the battleground longer.

Glimmer Cape: The Glimmer Cape provides Warlock or allies invisibility and magic resistance, allowing them to flee; it also works when Warlock is channeling Upheaval.

Refresher Orb: Warlock can use Fatal Bonds and Chaotic Offering twice with Refresher Orb, doubling the damage done to enemy targets. The item also increases Warlock regeneration, allowing him to continue performing abilities without returning to base.

Urn of Shadows: As a Warlock engages in ganks, Urn of Shadows gives attributes, mana restoration, and the ability to heal or harm.

Force Staff: The Force Staff helps Warlock to get into position to utilize his spells, as well as situating teammates and displacing adversaries; it may even be used on Golem to assist it in chasing down fleeing enemies.

Ghost Scepter: The Ghost Scepter deflects physical attacks from enemies, allowing Warlock to flee or utilize abilities without being slain.

Drum of Endurance: Warlock gains new characteristics from the Drum of Endurance. In teamfights, the active improves mobility and attack speed to help teammates and Golems.

Mekansm: Mekansm provides heal, armor, and health regeneration to Warlock and teammates so they can survive teamfights.

Eul's Scepter of Divinity: Eul's Scepter of Divinity increases Warlock's movement speed, helping him to better position himself in battles and ganks, as well as providing intelligence and mana regeneration, letting him to utilize abilities more freely. The active grants him a disable that he may employ against foes or on himself to grant temporary invulnerability while erasing debuffs like silences.

Rod of Atos: Rod of Atos immobilizes an enemy target from afar, allowing Warlock's allies and Golems to concentrate their assaults. It also improves Warlock's survivability by increasing his characteristics.

Lotus Orb: The active dispels and grants an ally a shield that reflects target abilities, which may deter adversaries from focusing on them.

Shiva's Guard: Shiva's Guard boosts Warlock's survivability by limiting attack speed and increasing intelligence, allowing him to perform all of his abilities with Refresher Orb. The sluggish active movement speed may also aid in keeping foes inside Upheaval and Golems' range.

Scythe of Vyse: Scythe of Vyse provides a significant increase to Warlock's mana regeneration and attributes, particularly intellect. The Hex ability disables an adversary from a distance, substantially lowering the possibilities for hostile teamfights.

Guardian Greaves: Guardian Greaves, which replace Mekansm and Arcane Boots, giving Warlock a significant boost in teamfights while also freeing up an inventory slot. Warlock can use self-dispel to remove debuffs on himself, such as silences, that prohibit him from performing spells.

Warlock in this stage has a relatively poor ability to defeat enemy champions, more inclined to poke blood for others to kill (with ultimate is different), so you should choose a safe farm and poke the enemy thanks.

Fatal bonds (Q) with a few basic attacks (if you're lucky, remember if you're lucky, you'll get a life if the opponent is negligent). Shadow word (W) is a tool to help you recover lost health and in many situations is also a skill to damage enemies, convenient for poke and finish. You need to reach lvl 6 quickly to promote your hegemony.

At this point, when you have the ultimate, you should take advantage of the gank + push roam or call your teammates to your lane to support the push. Because the cooldown of the ultimate is quite long, in the meantime you can farm again. Always carry the Town portal scroll with you so you can actively roam and escape.

Warlock in total combat depends a lot on Chaotic Offering (R), so if there's nothing special you must know to remind your teammates to limit fighting when there is no ultimate. The combo of wl is also simple, use the ultimate to stick the star with the most enemy champions, run up to use Fatal bonds (Q) and control the Golem to beat the opponent.

Shadow word (W) now to buff the health of Golems or teammates to jump into the fight or you keep it there, waiting for someone who has the ability to escape but your team can't get it to buff it, if you're lucky you have can get kills (this is called Kill Secure, not Kill Steal) Upheaval (E) is a very useful slow tool in long combat or narrow terrain.

Going with teammates is essential at this time, Warlock is one of the heroes that has the ability to turn the tide of combat very badly (together with Enigma, Necrophos, Magnus because these guys have wide area skills that bkb is not resistant to.

Your ultimate and Fatal bonds (Q) need the majority of the enemy team so try to force them to fight when you have the ultimate to be able to maximize the power of this skill. You depend a lot on your ultimate and teammates to win the teamfight. One more thing is that you should not forget the skill Upheaval (E), it is a tool that slows down the enemy terribly in teamfights with a very large AoE and slows down a lot of movement speed, use it immediately. when the ultimate is discharged, Fatal bonds (Q)