After a bar brawl it's customary, as a courtesy, to buy everyone who's still standing a round of drinks."

Tusk is a melee hero with a variety of ice disables, making him an excellent team initiate and ganker. In Ice Shards, he possesses a damage nuke and a disable, allowing him to precisely create a barrier in an enemy's path, impeding their progress and obstructing their escape route. Tusk can aid his teammates close the gap on foes by using Snowball, which envelops Tusk and any surrounding friends in a protective shell of snow as he rolls at a target adversary, damaging and stunning anything in its path.

Tusk also has the ability to Tag Team while he's in a battle, which allows all close friends to delay foes they're attacking with physical damage. Walrus PUNCH!, his ultimate, sends a target enemy flying with a powerful uppercut, stunning and paralyzing them while inflicting a critical hit and delaying them for a short period. The Terror from the Barrier, a formidable initiator and brawler, should never be underestimated in a fight, as he has a unique set of spells and disables that may put his opponents down for the count. 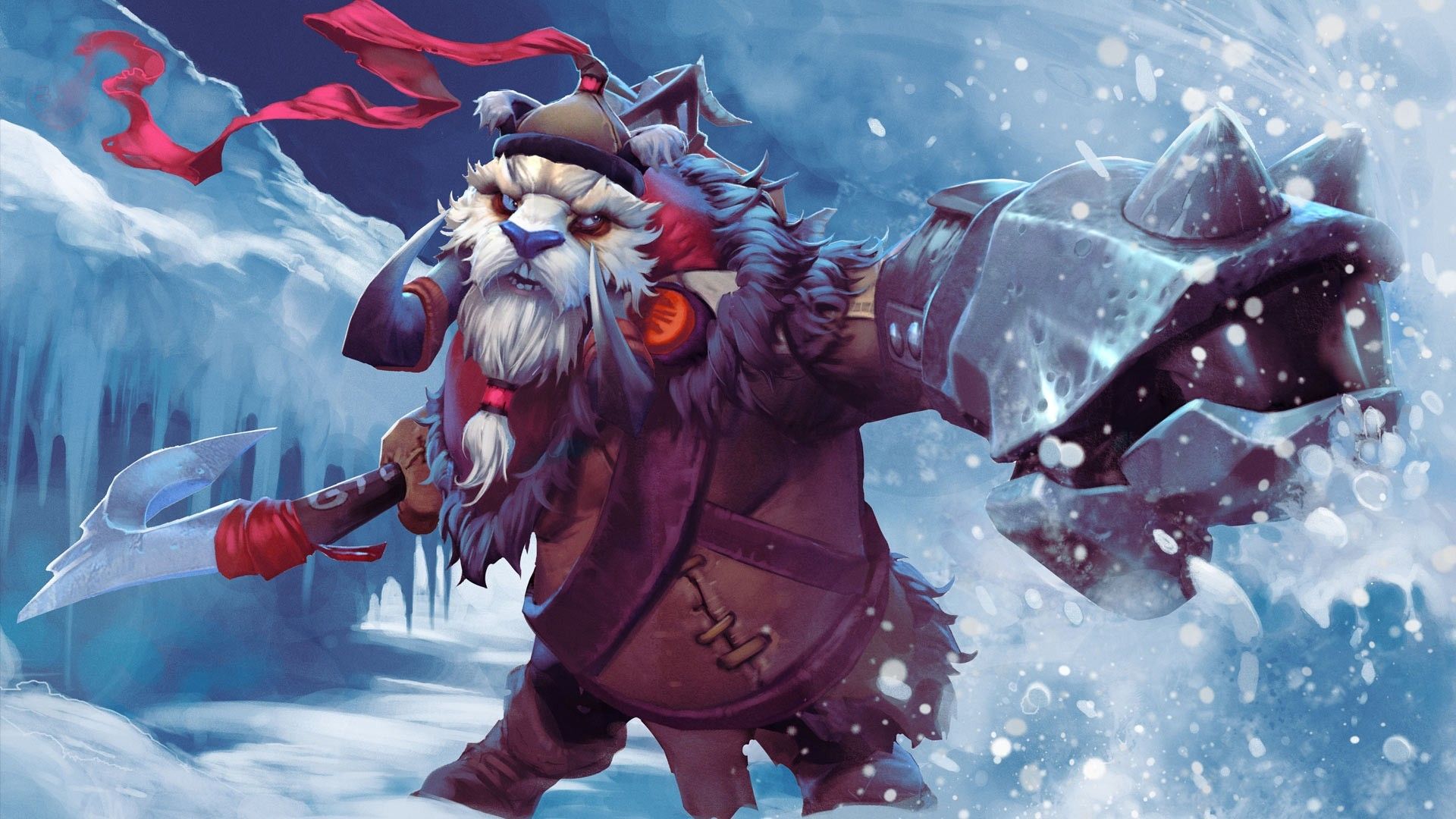 Players should max out the first Ice Shards skill with the aim of taking big damage. Frozen Sigil and Snowball should increase at the same point at first, Snowball maxing first. Particularly for Ultimate Walrus PUNCH needs to be increased with the level.

Effect: Tusk compresses each ice block into a sphere of energy to the specified location. All enemies hit take damage. The energy block reaches the destination, the iceberg within which forms a wall of ice in the way for 4.0 seconds.

Effect: Tusk creates a snowball, rolling to the specified target. At 350 units, allies can inject snowballs by clicking on them with the right mouse button, even while rolling. All enemies rolling in the path to the snowball target are stunned, taking damage. Allied champion walls in snowballs deal increased damage.

Effect: Creates an aura that lasts about 5.0 seconds. Tag Team causes nearby enemies to take physical damage. At the same time, when hit, the running speed is usually reduced.

Effect: Tusk unleashes each fatal punch, so powerful that it sends the target into the air. When falling to the ground, the subject is slowed down.

Effect: Walrus Kick chooses a direction and kicks the enemy unit nearest to you within a 250-meter radius. Heroes are given precedence.

Boots of Speed: Tusk needs a strong location to make the most of his abilities, therefore Boots of Speed should be purchased early on. During ganks, he can more quickly track down adversaries or flee from pursuers.

Magic Wand: Tusk can instantly recover his HP and mana thanks to the charge storage on his Magic Wand, which may make or break fights or ganks given his potent spells.

Urn of Shadows: Tusk gets a lot of advantages at a low price when he buys Urn of Shadows. Tusk can quickly get charges as a very mobile ganker, which he can use to heal himself and teammates or inflict greater damage in ganks; also, Urn charges may instantly put opponent Blink Daggers on cooldown from afar. Tusk gains higher HP and basic damage from the item, as well as scaling mana regen, making it easier for him to perform spells.

Phase Boots: Damage done with Walrus PUNCH! is increased by Phase Boots' boost to attack damage. During Tag Team, he can utilize the active to stay near to the adversaries.

Drum of Endurance: Tusk gains qualities from Drum of Endurance that offer him additional health, damage, and a larger mana pool to work with. When fighting the adversary, the active boosts his mobility and offers his squad an advantage.

Blink Dagger: Blink Dagger is effective in a variety of scenarios. Tusk's spells need solid location, thus Blink Dagger can let him reach inside range quickly enough to perform a disable. It may also be utilized as an escape mechanism after casting Snowball to shield himself long enough for it to come off cooldown, or to climb on top of a struggling friend to defend them with Snowball.

Lotus Orb: Tusk's durability increases when he uses Lotus Orb against tough foes. Echo Shell not only gives Tusk additional armor to help him survive, but it also allows him to utilize the opponent's unit-targeted spells against them if they try to target him during initiations, and it can provide him a bigger window to act while the enemy hesitates. Tusk can keep casting his spells thanks to the increasing mana replenishment.

Bottle: Bottle is particularly effective on mobility initiators like Tusk, since he may roam and set up kills for his team, and as a result, he benefits from always being at full HP and mana should a gank chance present itself. In addition, he may use runes to improve his ganking power.

Desolator: When coupled with Walrus PUNCH, Desolator increases Tusk's additional damage and lets him impart an armor debuff to foes.

Shadow Blade: Tusk's physical damage output is increased by Shadow Blade, and he gains yet another initiation ability. Shadow Walk may be utilized to provide massive physical damage to a gank target when combined with Walrus PUNCH!, or it can be used to get out from a tight position.

Heaven's Halberd: Through its many perks, Heaven's Halberd aids Tusk in becoming a better all-around warrior. It provides improved strength, status resistance, and evasion, as well as a disarm to disable opposing carriers.

Assault Cuirass: While pricey, Assault Cuirass is a powerful aura and combat equipment that may dramatically increase Tusk's damage output. Tusk's armor has been upgraded, and his attack speed has been enhanced, allowing him to do greater damage. Tusk can readily use the aura since Snowball gives him a method to approach adversaries, and the aura's armor debuff can help Walrus PUNCH! strike harder.

Solar Crest: Tusk gains armor and attributes from Solar Crest, as well as mana regeneration, which helps him maintain his pricey but powerful abilities. When you use the active on an adversary during initiation, you can boost the amount of damage they suffer from Walrus PUNCH! and allied attacks while also slowing down their mobility and attack speed.

Silver Edge: Tusk's initiating strength may be substantially enhanced by Silver Edge. Applying a break to a significant target not only increases Tusk's damage output, but it also disables their passive abilities, making them a considerably smaller danger in an encounter.

Blade Mail: Blade Mail is a potent survival gear that compensates for many of Tusk's flaws. The armor makes him more tanky, the intellect boosts his limited mana pool, and the damage boosts Walrus PUNCHeffectiveness. !'s Tusk may utilize the active to deter foes from assaulting him and to use his HP pool offensively against gank targets who try to fight back.

Soul Ring: Tusk can now wander more autonomously thanks to the Soul Ring, which also allows him to cast spells from his HP pool, allowing him to be more active on the map.

Arcane Boots: Tusk's mana pool has increased in size, and he has a way to recharge it, as well as that of his teammates, using Arcane Boots. Tusk can stay on the move and use his spells to set up kills for his squad since he can easily sustain his own mana pool.

Force Staff: Tusk's mobility is boosted by the Force Staff, a powerful utility item. It boosts his IQ while also increasing his mana pool and giving him HP regen to keep his health up to date. Tusk may utilize the active as an initiation booster to assist him position himself to launch his spells, as a swift escape, or to reposition allies for different reasons. It may also be used to disorient adversaries or disrupt an enemy's Linken's Sphere during initiation.

Force Staff: Heroes are pushed over Ice Shards and an oncoming Snowball by the Force Staff.

Blade Mail: The physical criticism of Walrus PUNCH is returned by Blade Mail!

Initially, gamers should buy couriers and items that help increase basic stats. In the post-match phase, in case the enemy team has a good shock damage ability, go to Power Tread to increase strength.

On the other hand, if you play in the direction of a completely pressing lane, you go to Phase Boots to take damage for Ultimate. Besides, if the team has not yet installed Arcane Boots, gamers will need to put on this shoe to limit the situation of running out of mana.

Tusk's potential after mid-game is not clear when compared to heroes like Magnus, Earth Spirit, Tiny or other popular position 4 heroes. Tusk no longer has a solo kill or an easy way to initiate combat. Tusk also does not contribute much damage in teamfight, mainly focusing on a single target.

Normally, Tusk will roll first. Therefore, Heart of Tarrasque and Assault Cuirass are reasonable choices. For items that increase damage, gamers should only go to Armlet of Mordiggian and Desolator. Thus, when using the ultimate, the ability to shock damage will be increased. In late game, try to farm items for tank ability to help stay in teamfights.