Enrage provides half benefits to allies in a +700 radius

"It is my spirit that keeps me safe, and not mere armor."

The warrior Ursa is the fiercest member of the bear tribe, always defending his land and his kind. During the long winters, when the mothers hibernate and nurse their cubs, the male bears patrol the upper lands, alert and tireless, to protect and perpetuate their race. As rumors of an evil force are spreading more and more, Ursa decides to travel beyond his wild homeland, with the intention of finding and destroying the threat before it can. can harm fellow bears. A being with a steadfast and upright spirit, extremely reliable, and also a loyal ally and protector.

He specializes in doing more harm to a single victim. He can attack at nearly full speed and get additional damage for each consecutive hit on a single target because to his powers. Ursa's Overpower and Fury Swipes abilities allow her to shred hefty enemies for up to 700 damage each hit. He's a vicious jungler and direct attacker who can solo even Roshan at low levels if he possesses lifesteal. Ursa is a carrier who may snowball if farmed, but his lack of counterspells and the diversity of anti-melee abilities that exist even early in the game may limit his potential, especially as powerful nukers and heroes with the ability to escape him make him a hero reliant on his team's spellcasters. Ursa's inherent strength and strength growth make him extremely durable, despite being an agility hero. 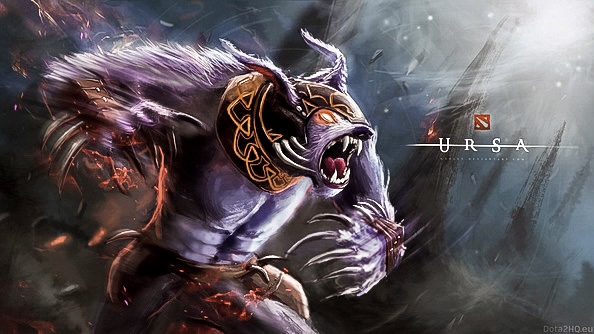 To begin, level up Fury Swipes and Overpower, as well as Enrageat levels 6 and 11. Earthshock isn't my first choice because the 25% slow for a skillpoint in the early game isn't worth it.

Early in the game, investing on 'extreme damage' is a much better option, especially if you have a partner with delays.

If you and your buddy want to get first blood at level one, instead of Fury Swipes, you should start with Overpower.

Effect: Ursa jumps 250 units forward and crashes into the ground, inflicting a strong shock that damages and slows all opponent units in the vicinity for 4 seconds.

Effect: Ursa's claws gouge deeper wounds in the adversary, prompting subsequent assaults to do greater damage to the same target. The additional damage is lost if the same target is not assaulted within 10 seconds.

Boots of Speed: Most heroes need Boots of Speed, but Ursa in particular needs them since they let him to follow down foes and get into Earthshock range when jungling, as well as decreasing downtime.

Magic Stick: A Magic Wand is created by combining the Magic Stick with the previous Iron Branches.

Wind Lace: If the opponent laner's movement speed is faster than Ursa's, Wind Lace allows him to keep following them down.

Morbid Mask: Morbid Mask works well with Ursa's heavy physical damage, allowing him to stay on the map for a longer period of time. It also provides him with a weapon with which to confront Roshan.

Magic Wand: Ursa's low mana pool may be supplemented with the Magic Wand, which might save him from trouble.

Battle Fury: Despite having an early effect through combat, Ursa may still farm quickly because of Battle Fury. It also helps him with his mana troubles at the start of the game.

Blink Dagger: Blink Dagger is used to take out characters or start fights since it allows Ursa to use Earthshock to pounce on an opponent hero and kill them quickly.

Black King Bar: Ursa is protected from disables by the Black King Bar, allowing him to continue attacking adversaries at close range.

Abyssal Blade: The stun of Abyssal Blade is effective for securing slippery carries. The bash also works well with Overpower since it increases Ursa's attack speed, giving her more chances to proc.

Aghanim's Scepter: Ursa may use Enrage more often with Aghanim's Scepter, and he can also use it when he is incapacitated, which is highly beneficial against repeating stuns. However, it cannot be used during a Duel or when Ursa is silent.

Vladmir's Offering: Ursa's success and heroism are dependent on Vladmir's Offering or other sources of lifesteal. Lifesteal helps him to easily take Roshan while maintaining his current health. Lifesteal also works with Fury Swipes, allowing Ursa to annihilate any foe by draining a large amount of health when Fury Swipes are already in place.

Heart of Tarrasque: Heart of Tarrasque is the best health item for slot efficiency, providing Ursa with significant tankiness as well as the ability to avoid retreating from a base siege for too long due to its percent based regeneration, as Ursa does not require damage items, but rather must survive in order to hit the enemy more times.

Linken's Sphere: Disarm and Silence, as well as other heroes with potent single-target spells, will benefit from Linken's Sphere. If Black King Bar fails to keep the adversary from locking you down, this item should be purchased.

Blade Mail: If the opposition team is prioritizing Ursa in battles to return the damage, Blade Mail is a viable option. It's generally purchased in conjunction with a Heart of Tarrasque, Satanic, or Eye of Skadi on Ursa to guarantee he has enough HP to survive the fight and deal Blade Mail damage.

Sange and Yasha: Sange and Yasha gives Ursa some easy-to-build HP and movement speed, so if a Blink Dagger or Shadow Blade isn't an option, try this item for some extra tanking and mobility. Later in the game, it may be deconstructed to make a Heaven's Halberd and a Manta Style, which grant evasion and debuff removal, respectively.

Desolator: Desolator is a good item to have if your team's primary focus is on physical damage. Consider purchasing it if you are tanky enough to not require a health item but not kited enough to require a lockdown item.

Scythe of Vyse: Scythe of Vyse is a temporary disable that turns your opponent into a harmless animal. Can be beneficial against heroes that can dispel the Abyssal Blade, and provides Ursa with amazing mana recovery. It also has excellent stats.

Scythe of Vyse: Ursa is hexed by Scythe of Vyse, and even if Ursa purchases an Aghanim's Scepter, he will not be able to break the hex. For a long time, he is extremely susceptible as a result of this.

After choosing Usra, use the first gold to buy 6 tangos, 2 Enchanted Mango and 1 Healing Salve so that Usra can stay in lane. Besides, buy a Quelling Blade to give Ursa more damage in the early game.

At this point, Ursa is not suitable for ganking. So join the farm to earn some money on the necessary equipment. Try to make a few last hits during this time. If you get stuck in lane, run into the jungle to farm. However, the best time for you to run in is when Ursa reaches level 5. Because when you reach level 6, Ursa will have Ultimate, the ability to farm and eat Roshan will be easier.

By the mid-game, it was much stronger and sturdier. You can use Earthshock to catch champions often. But remember not to go capture the general alone. In the event of a fight, fly over and activate Enrage to fight.

If your teammates don't need support and while waiting for the teamfight, you can continue jungling to complete the remaining items. However, if you get chased by an enemy hero while farming, you can turn on Overpower and Enrage to flip the bet.

Towards the end of the game, you control Ursa to catch odd and push towers. Ursa pushes turrets really fast so use your time to destroy as many Towers as possible. Besides, Roshan will come out once every 10 minutes, try to eat a lot of Roshan to help your team have more money and level. In addition, take advantage of the enemy team's loopholes to poke in the teamfight. With the help of Abyssal Blade, you can quickly finish any enemy.