There is no tale or song that predicts their arrival. Unknown treasures and horrors existed far beneath the earth's surface. The obsidian metropolis of Aziyog is well below the snaking magma fields and seething roots of dormant volcanoes, its unmatched stonework covering an unending chasm. The territory of the ruthless Abyssal Horde and their underlord Vrogros is enclosed inside honeycomb walls that were mortared with the bones of countless slaves. Vrogros is able to summon flame and debilitating malice through the twist between worlds thanks to the weapons created by monster forgemasters of his kind and his proficiency in the arts of the Dark Rift. He constantly tries to increase his holdings by destroying or enslaving everyone he comes across.His eyes have since gone upward because there aren't many lands available in the underground realm. A few doomed legions destined only to test the power of nations above have already crossed the chasm under his command as the first waves of abyssal invaders. Now when his complete force is prepared for never-ending conquest, Vrogros himself enters a realm lighted by the sun to proclaim his impending throne. Those who stand before the Underlord will either be crushed where they are or made to bow and pay tribute. 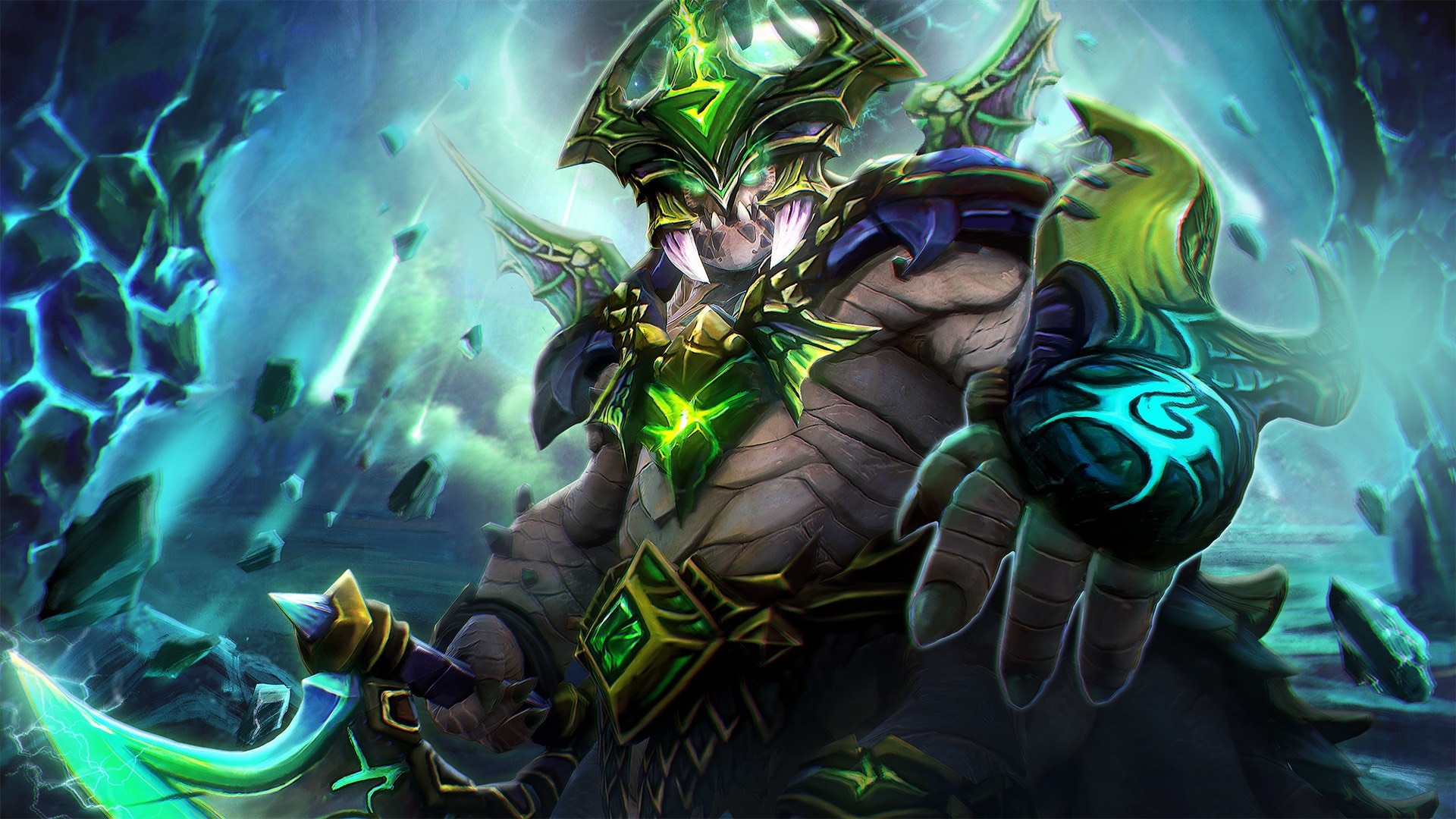 In general, your leveling priority of Q>W>E>R. Keep in mind that Firestorm has a 0.6 cast point for all of his talents. This needs to be maxed out first.Another zone-making tool is Pit of Malice, which also prevents initiations and traps opponents. This ability, which is the second of the Firestorm-PoM combo's two circle abilities, roots any target inside the radius for 1.8 seconds.Atrophy The passive of Under is Aura. It has a wide radius that makes the big guy stronger and weakens the opposition. Because of this, Underlord can easily jungle, control his lane, and harass the other lane.Underlord is a solid choice and a true play-making machine because of Dark Rift, which is his major strength. This skill can target allying units and structures and has a wide area of effect.

Effect: Sends down a series of fire waves that harm enemy troops nearby while doing more damage over time.

Effect: Any unit that enters the lethal pit at the target area will become rooted. Every 3.6 seconds, every enemy unit in the pit is afflicted.

Effect: Enemy units nearby suffer a reduction in base damage, which weakens them. Underlord receives temporary extra damage whenever an enemy dies while under the influence of this effect.

Effect: Opens two portals: one close to the Underlord and one at the intended target. For three seconds, heroes can channel a portal to transport to the other side. Allies who pass through the portal momentarily increase their movement speed and damage resistance. At least 2000 feet must separate each portal from the next.

Wind Lace: Compensates the lack of mobility and slow movement of the Underlord.

Boots of Speed: Is a requirement for all heroes in order to advance quickly.

Magic Stick: Can provide Underlord with the necessary mana for another ability while saving him from danger.

Soul Ring: Provides health regeneration and strength benefits to keep Underlord going, and when it's active, it gives him mana so he can use his skills.

Magic Wand: Is a logical development of Magic Stick that offers more health and mana in bursts.

Arcane Boots: Give some much-needed mana to Underlord and his troops.

Mekasnm: Provides health and armor to the Underlord's team to keep them alive.

Guardian Greaves: Is an obvious improvement over Arcane Boots and Mekansm, giving the entire squad significant health and mana regeneration.

Shiva's Guard: Aids Underlord in keeping adversaries inside the reach of Pit of Malice and Atrophy Aura.

Pipe of Insight: Decreases incoming magical damage, increasing the resistance of Underlord and his squad.

Crimson Guard: Substantially reduces enemy damage against the Underlord and his team in conjunction with Atrophy Aura.

Rod of Atos: Helps Firestorm's opponents be chained together.

Lotus Orb: Aids in absorbing magical nuke damage and is helpful to allies when pushing towers.

Blink Dagger: Is suitable for starting out with Pit of Malice.

Force Staff: Allows Underlord to move more easily and force foes into the Pit of Malice.

Eul's Scepter of Divinity: Increases Underlord's movement speed to keep adversaries inside the range of his atrophy aura and helps him with his low mana. He can better set up Pit of Malice with the cyclone active.

Radiance: Is a highly situational item that works well in pushes and teamfights. Burning down creeps will help Atrophy Aura's additional damage bonus grow, and Underlord will become even more resilient because to the increased evasion.

Linken's Sphere: Stops the disablement of Underlord and his teammates.

Force Staff: Will push opponents outside the effective range of Firestorm, Pit of Malice, and Atrophy Aura. Even before Dark Rift's teleportation kicks in, it can move Underlord's squad members away from him.

Shiva's Guard: Captures the Underlord's troops as they come together for Dark Rift and, if caught in his Pit of Malice, can be used to inflict harm.

Pipe of Insight: Almost all of the magical harm done by the Underlord is negated by the barrier.

Boots of Travel: Can be utilized to push back after Dark Rift has been employed by Underlord or to defend.

Here, you should concentrate on the laning stage because that is where it all begins. The laning phase in Underlord is effective and secure. His passive reduces a small part of the opposing damage, allowing him to effortlessly farm the lane, jungle, and harass. Your primary objective at this point in the game is to gain XP, not die, and to roam as much as you can.

You'll gradually begin to form groups as the game progresses to capture objectives like towers or Roshan. Underlord gains strength at this point. The majority of the time, completing objectives will lead to teamfights, making Underlord a serious threat to anyone who opposes his team since if something goes wrong, his Atrophy Aura and Dark Rift will provide him a ton of additional damage. If everything is going well, you can Dark Rift your team to another lane and keep pushing, making the opposition defend it and squander TPs and crucial abilities.

Underlord achieves his peak at this point. The majority of your essential pieces will be finished, and you might possibly be fully built. Additionally, you'll gang together more often so that your team and you may take over a lane. You might even set up for Roshan by smoking to kill a key target and luring the opposing team to battle in confined quarters. Your strong STR and INT numbers will help you survive fights, and you'll be aggressively pushing the lanes with stacks of Firestorm and Atrophy Aura. Also at this point, the effects of your Dark Rift will determine whether you win or lose. You'll either win or lose the game depending on whether you use your ultimate to counterpush or push another lane following a successful initial push.