The common ogre is probably the origin of the expression "Impossible with a plume". In its natural state, an ogre is barely capable of performing normal operations or deciding anything. Ogre dressed in filth, sometimes even accidentally wrapping the skin of dead animals on the roadside after eating them. Not a particularly social creature, ogres are often seen in close association with a rock or tree stump that they mistake for their own (an explanation for the rate of reproduction). their low). However, every generation or so, the ogre species is blessed with the birth of a two-headed Ogre Magi, who is quickly endowed with the true name Aggron Stonebreak, the title of the first intelligent ogre. and perhaps unique in ogre history.

With two heads, Ogre Magi can reach a level of perception on par with other single-headed creatures. Although the Ogre Magi cannot win any arguments (even when arguing with himself), he still enjoys a divine talent known as Red Numbers – a tendency to spawn random luck. nature through a puzzling chain of effects that allows ogre species to proliferate despite hostile forces, extreme weather or an inability to feed themselves. It seems that the Goddess of Luck felt sorry for this poor stupid species, so she wrapped the Ogre Magi under her wings. Who can blame her? Ogres are just pitiful creatures. 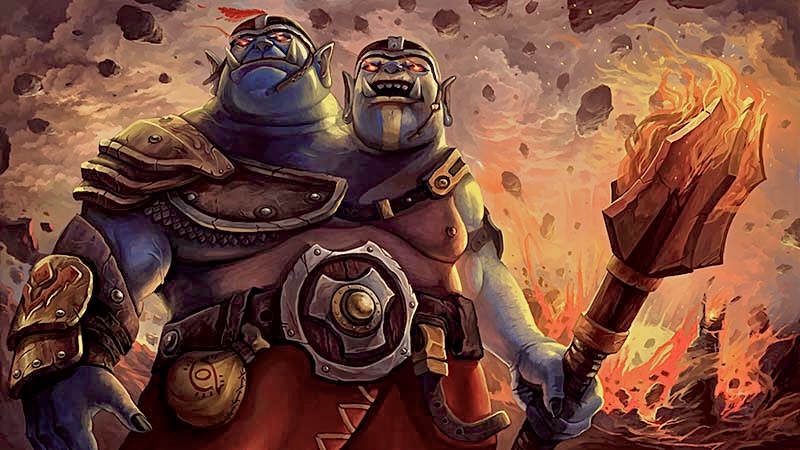 Since the Ogre Magi's damage depends mainly on the Fireblast skill, you should maximize this skill first. Bloodlust and Ignite should only increase by one point at first, then you should max out Ignite first and Bloodlust last. Ultimate Multi Cast should be leveled properly to increase the chance of being cast continuously.

Effect: When using a skill, Ogre magi has a chance to cast more shots of that skill while also adding some effects to his skills.

Note: if Bloodlust and Ignite are Multicast, the multi will jump to surrounding units.

Effect: Creates a barrier around the target ally that absorbs 85 percent of the next three attacks' damage. Fireballs are launched towards the attacker, doing 125 damage.

Magic Stick: Magic Stick may be used to augment your low mana pool, allowing you to cast more spells; it can also be converted into a Magic Wand later.

Magic Wand: Magic Wand is a straight enhancement over Magic Stick in terms of burst health and mana.

Arcane Boots: Arcane Boots provide lots of mana for all of your spells, as well as assisting other teammates who are mana-hungry.

Force Staff: Force Staff provides Ogre with much-needed mobility, allowing him to keep up with adversaries or flee conflicts while also modestly boosting his mana pool.

Aether Lens: Aether Lens increases the casting range of all of your abilities and equipment, allowing you to stay in the back of battles while still casting spells, as well as giving you additional mana.

Orb of Venom: Orb of Venom boosts the amount of damage you do when zoning foes and makes it more difficult for them to flee.

Soul Ring: The Soul Ring may be picked up in lane to offer extra mana when needed, and Ogre's enormous health pool for an intelligence hero reduces the danger of activating it.

Veil of Discord: Veil of Discord boosts your armor and health regen, provides much-needed stats, and increases your and your teammates' spell damage.

Shiva's Guard: Shiva's Guard offers you even greater AoE slow in battle and boosts your already impressive armor to new heights. Furthermore, the additional intelligence boosts your mana and spell damage by a significant amount.

Scythe of Vyse: Scythe of Vyse provides an extra disable, several qualities, and excellent mana restoration. The hex may be used in conjunction with Multicast to disable numerous foes at the same time.

Silver Edge: Multicast can be broken by Silver Edge.

Lotus Orb: Fireblast and Ignite are reflected by Lotus Orb.

You can stick to the lane or go Roam depending on the ability of your teammates to pick what hero. With going Roam, you need to use Smoke of Deceit reasonably to be able to accurately time it to arrive and discharge skills in the enemy's face (remember to ping your teammates first).

Going Roam is quite risky in the game, because if there is no life for your team, you and that lane teammate will be extremely lost. As for the fact that you are determined to stick to the carry lane, it's not as hard work as Roam but only requires you to fully ward, pull creeps and support when needed. Remember to bring the Town Portal Scroll to support other lanes.

Still don't forget the task of warding and going with your teammates, because Ogre Magi is a support that doesn't need to farm too much, it is essential that you are always present with your teammates to perform turret push, small combat, and odd catch. (If you have a farm, then Ogre magi will follow the support farm path.) Your job in teamfight is to keep losing the leopard to fly straight to your team and throw Fireblast (Q) with Ignite (W) (Ignite if multicast, it will automatically spread to other guys) to protect. teammates safely. Bloodlust (E) you prioritize buffs for champions that are prone to hand damage (especially Carry).

By now you have quite a lot of furniture already, and so does your team. This stage is the stage where both factions will easily forget about warding to control the map (because there is already quite a lot of occupied equipment). Don't forget that and spend 1-2 slots for wards and Town Portal Scrolls. In teamfight your task is the same as in the midgame that is standing and releasing skills, preventing the enemy from hitting your team.

With 2 Fireblast skills when you have Aghanim's Scepter you can lock 2 targets at once (not to mention the other equipment you build) or if your team has teammates with good self-defense ability, you spend Your ability to deal damage hits the muzzle of the weakest enemy, ending his life quickly to turn the combat into 4vs5 quickly, bringing the best benefits to your team.