Someone once said that the path of a Sagittarius was paved with the corpses of the defeated, but for a man called Warrunner, it was a long road indeed. In the eyes of outsiders, the four-legged clans of Druud were often misunderstood as barbarians, brutal creatures. No writing, no music, no religion. For Sagittarius, fighting is the perfect thing of thought, the highest expression of a tribe.

If killing is an art among the centaurs, then Warrunner Bradwarden deserves to be the greatest artist of the race. He rules the arena of Omexe, an ancient arena where the centaurs have for thousands of years performed their gladiator ritual.

His fame spread far and wide, countless people from all over the world flocked here just to see the centaur fight. Always the first to enter the arena, and also the last to leave, he composed a masterpiece here, an immortal song of blood and steel, thrown in the parts of the vanquished above. sand sand background of death arena.

Warrunner defeated warrior after warrior, until the arena exploded with cheers calling his name, and then he found himself, the champion of his Clan. Omexe's championship belt was given to him. But then he realized, he no longer has an opponent in this Omexe arena. What would a warrior be without a challenge? 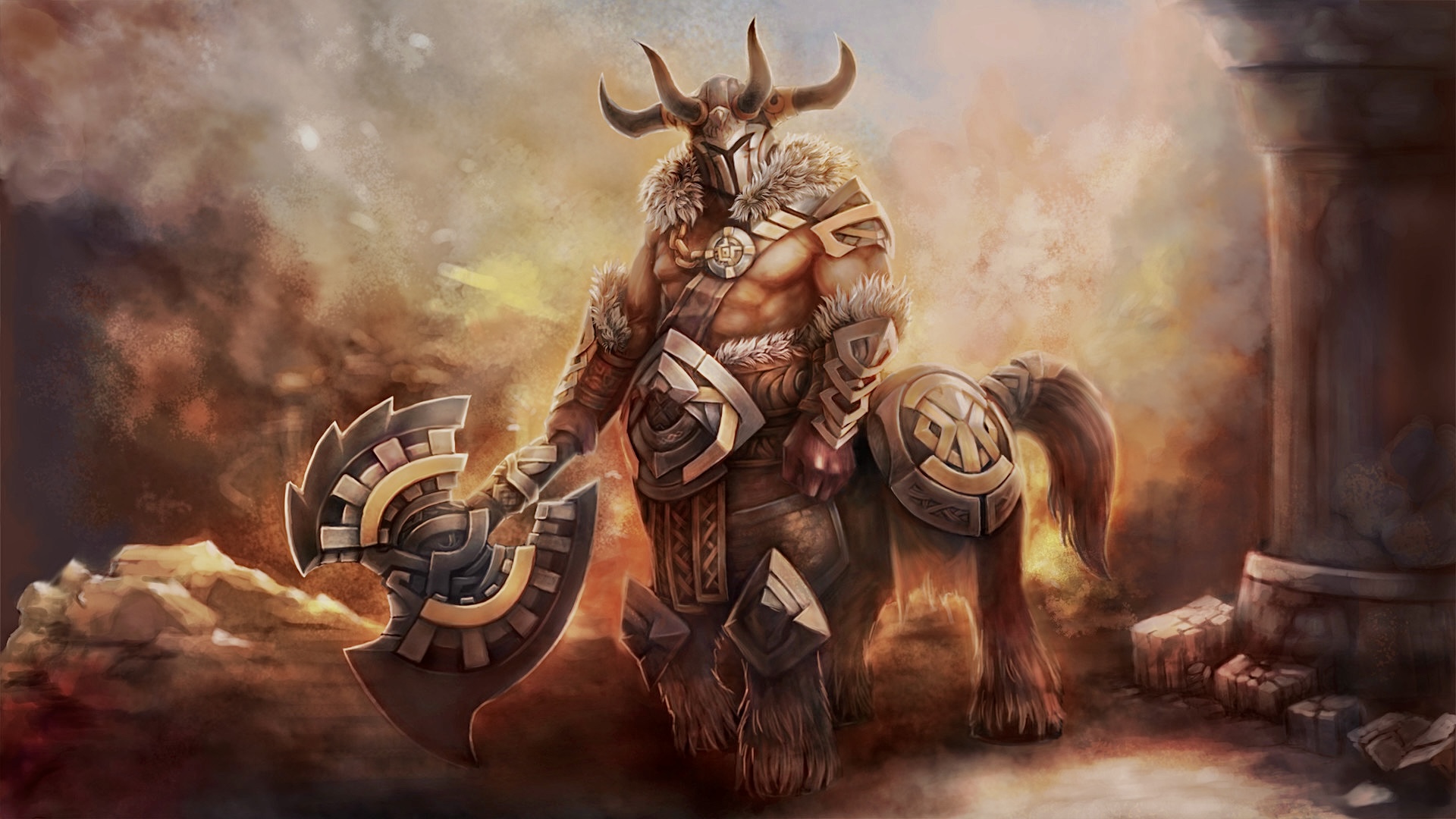 Get 1 point of War Stomp (Q) at the first level so that depending on the case you and your teammates can eat fb or not, if not, just leave the plus point there and then add it when creeps appear. Double Eagle (W) is Cen's main damage ability, so it is a priority to maximize first, but you will have to use it carefully if you do not want to feed the enemy network, then War stomp (Q). Maximize Return (E) in the end (take 1 point at early levels to deal a little more damage to those who like to hit you) because you already have quite a bit of power by then. Ultimate get the correct level.

Range of effect: radius 315 around.

Effect: Deals a powerful blow to the opponent, dealing 175/250/325/400 damage to the main target and spreading to the surrounding area, also taking the same amount of damage himself.

Note: Centaur cannot die using this skill if the damage taken is greater than the current health.

Effect: every time an enemy hits Cen with a basic attack, that person will take 1 amount of damage back.

Note: this skill works when the attack hits Cen, meaning that missed attacks will not activate this skill.

Scope of use: whole map.

Effect: Increases movement speed to maximum for himself and allied champions and cannot be slowed. When he and his allies touch an enemy while this ability is active, they take damage and have their movement speed slowed.

Bonus Effect: Reduces damage taken by 60%, and allows all allied champions (including him) to run across terrain for the duration of the effect.

Magic Wand: The Magic Stick may help you survive in lane and can later be transformed into a Magic Wand.

Bracer: The Bracer provides a little attribute gain, particularly in terms of strength, which helps to offset the health cost of the Double Edge.

Blink Dagger: To begin with Hoof Stomp, you'll need Blink Dagger. If your team doesn't have any other heroes that can begin well, it's a must-have item.

Pipe of Insight: In team fights, Pipe of Insight helps to endure a lot of magical damage (especially to defend allies from magical nukes) while also lowering the health cost of the Double Edge.

Aghanim's Scepter: When Centaur's squad is under the impact of Stampede, Aghanim's Scepter allows them to gank or flee from ganks via inaccessible terrain. Furthermore, if the squad is weak to strong burst damage, Stampede damage reduction is a huge aid in setting up a better team battle and surviving it.

Vanguard: If you're dealing with a lot of physical attack damage, Vanguard is a solid choice. It may be upgraded to Crimson Guard for increased team resilience or to Abyssal Blade for more consistent disabling.

Blade Mail: With Retaliate, Blade Mail damage reflect accumulates, making Centaur an even less appealing target. In fights, however, enemies will most likely be focusing on your teammates rather than you.

Heaven's Halberd: Strength and the ability to disarm enemies are both granted by Heaven's Halberd, which can be useful late in the game when Centaur's damage drops.

Vladmir's Offering: To complement Retaliate, Vladmir's Offering adds armor, mana restoration, and lifesteal. Centaur is a decent aura carrier that is typically used as an offlaner and is praised for its tankiness.

Radiance: Centaur Warrunner is unable to blink due to Radiance, forcing him to employ Stampede.

Rod of Atos: During Stampede, Rod of Atos has the ability to root for a hero.

At the beginning of the game, you should last hit the leveled minion, because you are quite slow, so the use of War stomp (Q) is very awkward without the support of teammates or careless enemies, and the mana consumption is quite high. compared to Cen's mana. Because your damage and resistance are very good, farming under turrets is not too difficult, it is essential that you level up to lv6 quickly to get the ability to gank or kill the enemy hero easily. Best.

This is when you have 2 options: stick to the jungle or farm lanes, monsters to get the fastest Blink dagger or if you meet the right teammates you can gank continuously in enemy lanes and jungles. . Your way of fighting is to chop the opponent, so when you fly in, you should use Double eagle (W) when you have a lot of health or when you kill the enemy. The important target while ganking is a target to be gank or a support target, carry the enemy (if there are multiple targets) Stampede (R) is a skill that helps your teammates and you to reach the target well or use it to run away as well. not bad Town portal scroll is an indispensable thing in your inventory.

You are a tanker, initiator, so it is extremely dangerous to leave the squad at this stage if your teammates are beaten down or forced to fight without people. With Stampede (R) and War stomp (Q) with Blink dagger you can easily choose a target to stun in combat, usually it will be a carry, nuker, initiator and your teammates will swarm as fast as possible. with maximum running speed. If you stand in the tank and turn on Blade mail at the right time, you will absorb a large amount of damage and deal with the damage reflected from this equipment with Return (E).