"If at first you don't succeed, stand closer, shoot again."

The western forests keep their secrets well hidden. Lyralei, master archer of the wood and wind's favorite godchild, is one of these. Lyralei's family was killed in a storm on the night of her birth, their house blown down by the gale, their contents scattered to the winds. Only the newborn survived the death and destruction debris field. The wind took notice of the lucky infant crying in the grass in the calm after the storm. The wind felt sorry for the child and lifted her into the sky, dropping her on a doorstep in a nearby village. The wind returned to the child's life on occasion in the years that followed, watching from afar as she honed her skills. Windranger can now fire her arrows precisely to their targets after years of practice. She moves at breakneck speed, as if aided by a strong wind at her back. She slaughters her enemies with a hail of arrows, having nearly become a force of nature herself. 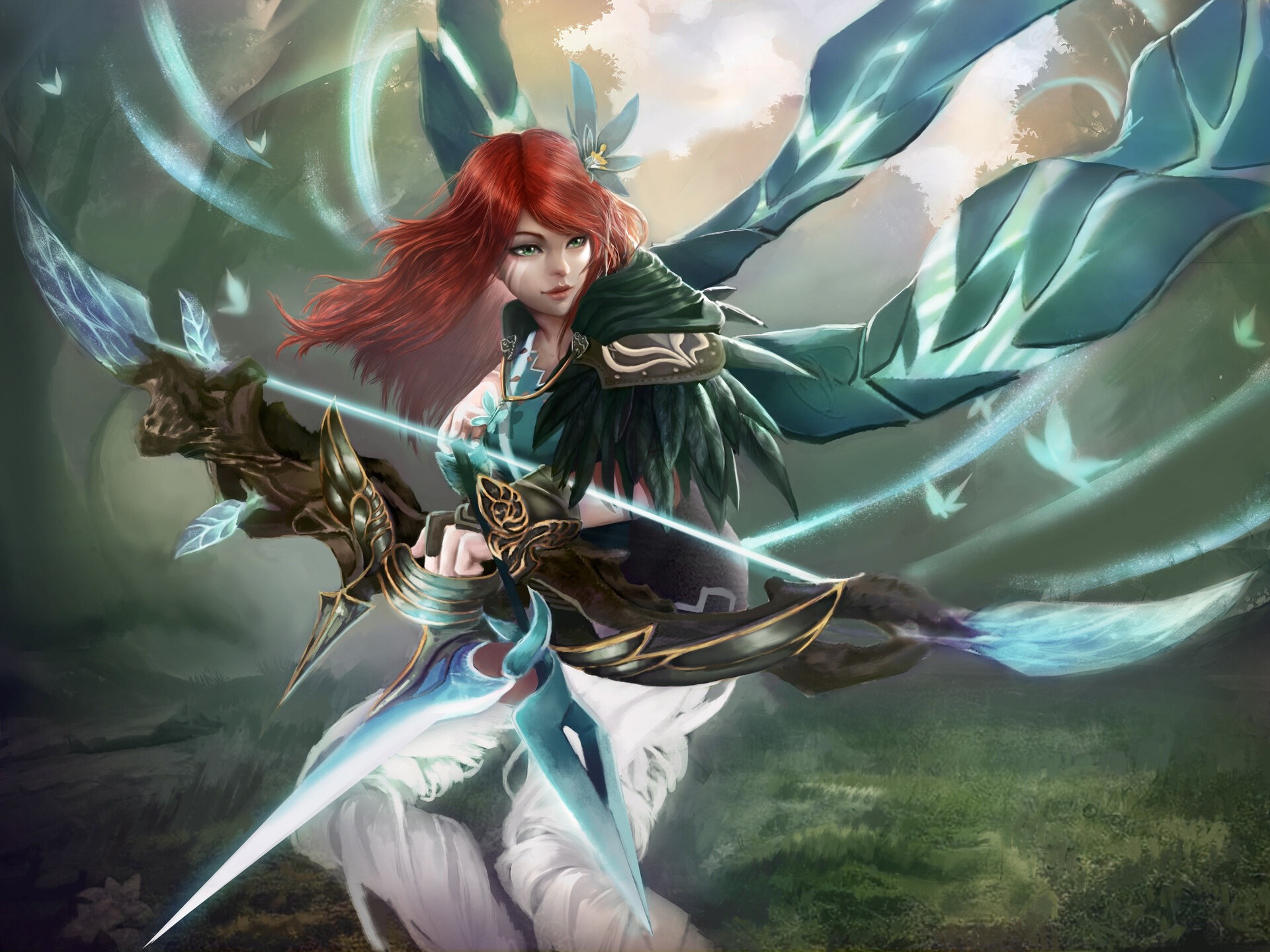 Shackleshot has more than half the maximum duration at level one, so one value point is sufficient until you max out your other spells.Max Powershot is your farming and waveclearing tool. Windrun comes second because it allows you to be aggressive and tower dive. Extra points in Windrun are definitely valuable early on to allow you to tank tower for a level 6 dive, and depending on the enemy mid shackle may or may not be required. At level 7, you should ideally be 1-3-2-1, or 0-3-3-1 if Shackle is unnecessary. Whenever possible, rank up to the highest possible level.

Effect: Shackles the target to an enemy unit or tree directly behind it in a line. The stun duration is reduced to 0.75 if no unit or tree is present.

Effect: Windranger charges her bow for up to one second in order to fire a single powerful shot that deals more damage the longer it is charged. The arrow inflicts damage on enemies in its path. Powershot's damage is reduced by 20% for each enemy hit.

Effect: Increases movement speed and adds evasion to all physical attacks, while slowing nearby enemies' movement.

Effect: For 3 seconds, summons a strong wind that pushes all enemies within 1000 radius by 240 units per second in the target direction. Targeted vector 1500 Mana Casting Range Cost: 150 30 seconds of rest.

Effect: Windranger uses the wind to gain 300/400/500 extra attack speed against a single enemy unit or structure, but her attack damage is reduced. The additional damage caused by secondary item effects is not reduced. This effect lasts 20 seconds.

Phase Boots: Windranger can use Focus Fire to run down enemies by providing movement and attack damage.

Magic Wand: In the middle of a fight, it provides burst healing and mana regen.

Infused Raindrops: Windranger is immune to magical burst damage, which Windrun does not block, giving him an advantage against nukers.

Bottle: Windranger's health and mana are restored as she manages runes.

Blink Dagger: When combined with Windrun, Windranger can instantly reposition for her abilities, particularly Shackleshot, or escape incoming enemies.

Scythe of Vyse: Gives her extra intelligence to boost her base damage and more mana regeneration to cast spells The hex can be used to instantly hard-disable priority targets or as a powerful complement to Shackleshot.

Linken's Sphere: Gives Windranger stats all around and powerful mana regen Its spellblock makes Windranger much more slippery when avoiding enemy ganks, or provides her with a larger window of opportunity to cast her disables in a teamfight without being disabled herself.

Eul's Scepter of Divinity: Is a good low-cost utility item to help Windranger. Windranger's mobility is greatly enhanced when combined with Phase Boots icon.png and Windrun, and the extra intelligence and mana regen give her much more utility with her spells. During fights, you can use the active to disable an enemy and position yourself for a full-duration Shackleshot, or to generally disable enemies or grant yourself temporary invulnerability (while removing debuffs from yourself).

Orchid Malevolence: Soul Burn disables ability-dependent enemies and deals bonus damage. It can be upgraded to Bloodthorn for a significant DPS boost and True Strike to counter evasive enemies.

Force Staff: Is a powerful and versatile tool for positioning a Shackleshot, allowing you to force a unit in front of a tree, a creep/unit in front of another unit, or yourself into position. The increased intelligence grants her more mana and base damage, and it can also be used to displace yourself during escapes in an emergency.

Desolator: Windranger gains increased damage output as well as an armor reduction debuff that can be applied to both buildings and heroes.

Rod of Atos: Can hold a target down so that Windranger can cast Shackleshot from any angle he wants.

Aghanim's Scepter: Windrun's speed is slowed and it becomes unpellable; while these are unimpressive for a carry, they can be useful at times.

Diffusal Blade: With each Focus Fire attack, she drains mana, depriving her target of mana to cast abilities and dealing additional guaranteed damage.

Rod of Atos: Windranger is prevented from fleeing with Windrun.

Orchid Malevolence: Windranger's performance will suffer as a result of her reliance on her skills for any tactical advantage.

Linken's Sphere: It is effective against Focus Fire and Shackleshot.

Blade Mail: Windranger's Focus Fire damage can be returned with this ability.

Nullifier: Is especially useful against windrunners who go aghanims because it removes windrun from her repeatedly, rendering her extra charges useless.

Heaven's Halberd: Can protect you or a teammate from a large amount of damage from Focus Fire

You can kill most heroes on your own once you have your Javelin and ultimate ready. Instead of farming enemy supports, try to figure out which enemy core will pose the greatest threat and gank and kill them to slow down their game.

This is the point in the game where 5 on 5 teamfights will begin, which means you should have your Black King Bar by now so you can ignore the enemy team and focus on your preferred target.Try to fight around enemy objectives so that when you win a fight, you can get a tower.

While your ultimate is useful for killing Roshan, you cannot fight without it. So, either commit it to Roshan when you are confident that the enemy team will not contest or fight you afterwards, or use the ult to win a fight, in which case you will need an ally skilled at taking Roshan to secure it.Windrun, on the other hand, can tank Rosh quite effectively!

At this point, you must exercise extreme caution because you can easily be chain-stunned and blown up before you can use your Black King Bar or Windrun. When a fight breaks out, don't immediately commit to the first guy you see; instead, consider who your most valuable target is (usually the enemy hero who deals the most damage) and save your Black King Bar and ultimate for when they appear. You can't afford to use your ult on a support unless you're certain you'll kill them before they can cast any spells or equip any items, and they can't just buy-back and teleport in afterwards!

This is also the point in the game where split-pushing becomes more common, which is fortunate for you because you are one of the best solo-kill heroes in the game! Here are two important pointers: