Rylai the Crystal Maiden was born in a land with a mild climate. She grew up with Lina, her "fire-tempered" sister (enthusiastic + hot-tempered).

Early on, Rylai discovered that her natural attraction to the Ice Elementals would cause trouble for those around her. As long as she rests by her side, the well or the stream will be frozen in an instant, the crops that are about to be harvested will be injured by frost, even the orchard will be frozen into ice, and then quickly. broken and withered.

When their parents were reluctant to send Lina to the South, Rylai was quickly "exiled" to the cold and frosty North, where she was raised by an Ice Wizard living there. the top of the Blueheart Glacier mountain. After a long period of study, after feeling that Rylai was able to cultivate Frozen Arts on his own, the Mage sank himself into the middle of the glacier and began to sleep for a thousand years. mine.

From then on, Rylai's Frozen Arts continued to improve. And now, her magic was unmatched by anyone. 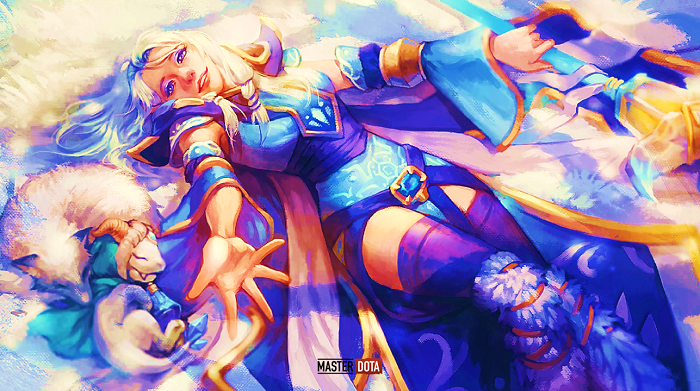 Get 1 point of Frostbite at early level to catch a single target early, or replace it with Crystal nova as both are crowd control skills. Maximize Crystal nova first to get damage as well as slow duration, get 2 points of Arcane Aura and Frostbite at early levels to increase control skills and restore mana for allies. Ultimate you can get last after maxing out all other skills, because it's Rylai's ultimate in the mid and late game that really works because this is the time for total fights.

Effect: creates a block of ice that immobilizes the target enemy and deals 100 damage per second

Effect: Creates a blizzard around a standing position, sleet drops randomly fall in an area, dealing 105/170/250 damage for each sleet that hits the ground on enemies.

Wind Lace: Wind Lace also boosts movement speed at a low cost and may be built into a variety of equipment.

Tranquil Boots: The Tranquil Boots are the lowest upgradeable boots available, allowing Crystal Maiden to stay out in the field for longer.

Crystal Maiden may stay out in the field indefinitely since Arcane Aura replenishes her mana pool while Tranquil Boots' passive heals her. The improved mobility speed is also beneficial, as it allows her to more efficiently roam, gank, and flee.

Magic Wand: Crystal Maiden lacks Magic Wand, which is an inexpensive source of extra characteristics. She can also do more in battles now that she has more charge storage.

Glimmer Cape: If you plan on using Freezing Field frequently, Glimmer Cape would be a good investment. Casting the active on yourself before using your ultimate will give you a bit more time to channel it. When used on Crystal Maiden or an ally, it may be a fantastic stealth initiation, escape, or survival tool in other scenarios.

Blink Dagger: Blink Dagger improves Crystal Maiden's mobility by letting her to leap into range of opponent heroes and disable them with her disables. It makes it easier for her to maneuver throughout the map, either to help her allies or to flee chasing foes.

Force Staff: Crystal Maiden may use Force Staff to reposition herself and increase the amount of her mana pool, allowing her to cast her disables more readily. It's especially handy if saving up for a Blink Dagger isn't an option.

Black King Bar: Black King Bar is a high-priced luxury item that should only be considered if the farm has been prioritized and all other support responsibilities have been completed. It increases Crystal Maiden's health pool while also preventing interruptions to her ultimate.

Ghost Scepter: The Ghost Scepter grants Crystal Maiden a brief period of invulnerability to physical damage as well as several bonus qualities, allowing her to survive against assaulting carry. The active may also be used to prevent foes from interrupting Freezing Field channeling by hitting her.

Veil of Discord: Crystal Maiden gains an attribute bonus from Veil of Discord, an inexpensive utility item. Aside from the stats, the spell damage amplification helps her squad to deal greater damage in battles with abilities, particularly Freezing Field.

Black King Bar: Crystal Maiden is rendered practically useless by Black King Bar and other sources of magical immunity/reduction, which prohibit her from activating her abilities and Freezing Field from causing damage or slowing. Even in her ultimate, these items make it simple for opponent heroes to kill her swiftly.

Skull Basher and other forms of bash are particularly difficult for Crystal Maiden, because the stun will penetrate it and negate her ultimate, even if she has a Black King Bar.

Orchid Malevolence and Bloodthorn are a problem for Crystal Maiden in the same way they are for any spell-based hero: if she is unable to utilize her powers due to a quiet, her fighting effect is drastically weakened.

Blade Mail reflects Freezing Field, causing Crystal Maiden to take massive damage when she performs her ultimate. Due to her limited health pool, heroes who construct Blade Mail (such as Axe minimap, Clockwerk minimap, or Bristleback minimap) may be extremely difficult for her.

You should determine whether you are going to roam or stick to the lane to protect your teammates from the beginning so that you can buy appropriate equipment. With roaming, when you have 2 control skills, you and your teammates can easily get kills if combined well. With a protective lane, if your lane teammates are heroes with good damage ability, you and that person can overwhelm the enemy lane or get kills early.

However, with thin blood and too much armor, the most important thing for you is to choose an appropriate standing position to minimize the damage taken when roaming or laning. During the match phase, you always have to follow the Town portal scroll to support your teammates in time.

This is the extremely frequent roam + gank phase when your team's gankers already have enough levels and basic equipment for ganking, and create space for your carry team to farm to the maximum, or go to that lane to help. it pushes the lane, counter gank if the enemy targets your carry team. Because Rylai's mana regeneration is very good, you can gank continuously during this phase (unless you already have the ultimate, it's different ).

Depending on the approach distance, you can use Frostbite (W) first to hold the enemy and then use Crystal nova (Q) to slow or c0mbo vice versa if the enemy is far away. Freezing field (R) is a very powerful damage skill, you should launch it on slopes or hidden corners (when the opponent is out of sight) when being chased so that the opponent can't react or launch in time.

Teamfight after the opponent has used up all his stun skills to deal the greatest amount of damage possible. When buying equipped with Blink dagger or Force staff, you can actively rush to arrest the enemy so that your teammates run to defeat that bad guy. You are a very "delicious" girl, both literally and figuratively in the game, so it will be the focus of focus if there is a fight, so you have to choose a suitable standing position lest you get on the board quickly. Remember to plug wards, break wards in this phase regularly.

This stage you go with your teammates, fully ward, use Smoke of Deceit to gank single targets or start a teamfight by surprise, creating conditions to proceed to destroy the opponent's Ancient or push 1 lane, force the opponent to deflect turret or have to fight. When you have bkb you can become an initiator of the team with the skill Freezing field (R) that damages and slows the enemy with a large area.

The target in your total teamfight will usually be the enemy initiator, nuker, tanker, use Frostbite (W) to lock the enemy so that they won't be detrimental to your team in the teamfight (and the carry guys usually already have it. buy bkb in this stage already).