"No, I blame no one who covets my horn. But to desire more than sight of it is a guarantee of death."

Deep in the volcano area of Mt.Joerlak is the home of a four-legged and horned creature named magnoceros whose horns attract hunters because of the high value of them in smithing. These horns are more precious than any alloy as any weapons smithed from them are mesmerized. The biggest and sharpest horn belongs to a beast which is called Magnus.

For many years, Magnus has become the target of hunters but instead of running away, he really enjoys that and toys with them. Whenever he returned to his cave, there were stained gores shattered on his hooves and horns. Sensing the imminent threat, the chief of the Magnoceroi tribe requested the hero and other residents to flee to the North. But with his pride as a true warrior who never failed to defend his tribe refused this idea without any hesitation. He declared Mt. Joerlak was still a safe place to stay no matter how many attacks from the hunters.

Then one day, Mt. Joerlak wasn't as peaceful as It used to be. It erupted without any sign of warning which put the life of the Magnoceroi tribe on the line. Half of the residents were burned to death or smothered by the ash and smoke. Observing the death of his kin, Magnus eventually changed his mind and pushed all the survivors to the north. Unfortunately, hundred hunters armed with bow and steel sieged them on their fleeing way. Magnus had no choice but to fight back. He singled out the fiercest brothers and sisters to clash with these men and let the elders, mothers and calves vanished into the thin air.

No one knows what happened after this fight. Some say Magnus claimed the victory and rejoined with his kin while others say he died in the battle field. But none of them are correct. Magnus is on his way hunting down who is responsible for the eruption of Mt. Joerlak as he didn’t believe that was an accident. Then he will rejoin with his kin when everything is done. 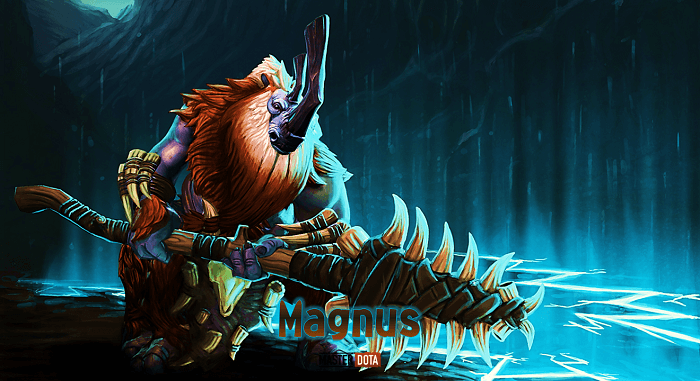 In-game, Magnus is described beautifully as such:

“Enemies who are foolish enough to gather learn to fear the horn of Magnus. Able to pull nearby foes together, he can batter them with empowered attacks or skewer them with his horn to bring them before his merciless allies.”

This build tends to maximize your farm at lane in the early game. In the first three levels, you should add one point in Shockwave, Empower and Skewer. Then the first and the second abilities you should max out are Empower as it helps you to farm quickly to get golds for the core items.

After maxing out these abilities mentioned above, now it’s time for Skewer. Skewer is more useful in the mid or late game as it can be used to initiate the combat or to isolate the enemy carries to stop them from dealing damage on your allies.

And do not forget to put a point in the ultimate whenever possible!

Effect: Magnus swings his spear, hits the ground and sends out a wave which causes damage to the enemy units in a line, pulls them toward him and slows them for a few seconds.

The projectile travels at 900 speed.

The Shockwaves travel at a speed of 900, taking 1.333 seconds to reach the maximum distance.

With the travel distance and radius, it can hit units up to 1400 range away.

The shockwaves first apply the debuffs, then the damage.

Plays an initial sound and particles upon start casting.

The slow of multiple casts does not stack, it only refreshes the duration.

Slows and damages Roshan but does not pull him.

With Aghanim's Scepter icon.png Aghanim's Scepter, the extra Shockwaves are launched with a 30° angle to the left and right of the centered Shockwave. Although the areas of all three waves overlap heavily, an enemy may be hit by only one of them. Upon reaching max distance of 1200, the Shockwaves return to the original cast location.

The returning Shockwaves act like separate casts, cast by invisible dummies. Therefore, enemies at the very tip may only be hit once. This is because Shockwave does not hit units behind the caster, so units hit by it 200 range beyond its max travel distance do not get hit upon returning.

On the other side, units 200 range beyond the original cast point do get hit by the returning waves. The returning Shockwaves can hit previously already hit enemies a second time, and also pull enemies towards the cast location as well.

Effect: Magnus rears and grants an allied unit the bonus damage and cleave effect on their attack while Magnus receives a 75% larger bonus.

Only increases base damage and that given by the primary attribute of affected units. Raw bonus damage is not increased.

Effect: Magnus rushes towards with the glowing tusk. Any heroes hit on the way of Skewer will be dragged with him, dealt some damage and briefly slowed as well.

During the Skewer, Magnus is fully disabled.

Enemy heroes within 145 radius around Magnus get moved in front of him and dragged along.

Dragged heroes are stunned during the drag, and land 200 range away in front of Magnus at the end of the charge.

Can only drag heroes, including illusions, clones, and creep-heroes.

Can charge through and drag enemies over impassable terrain.

Skewer first applies the slow debuff, then the damage.

Destroys trees within 200 radius during the charge.

Effect: Magnus tosses enemies in front of him over his head and to the rear causing damage and stun them when landing.

Requires Aghanim's Shard to be unlocked.

Horn Toss's search area is a circular segment with a radius of 325, and cutting off and at a total angle of 230°. This means it affects units in front of Magnus, and to his left and right up to a certain degree.

Enemies are always tossed at a location between 180-210 range behind Magnus, varying based on where they were in front of him.

Enemies are moved over Magnus' head, in an arc with a height of 300, and varying lengths. The toss always takes 0.6 seconds. Enemies are fully disabled during the toss.

The damage and stun are applied upon landing. This means enemies are effectively stunned for 1.35 seconds.

Horn Toss first applies the damage and then the stun upon landing.

Stuns and damages Roshan but does not toss him.

Effect: Magnus creates a circular shape around him which sucks all the enemies within this shape in front of him, stuns them for a few seconds and deals damage.

Instantly pulls all affected units 150 range in front of Magnus.

Reverse Polarity first applies the debuff, then the damage.

There is no limit of how many units can be affected.

Stuns and damages Roshan but does not pull him.

The particle effects and a sound effect start playing at the beginning of the cast.

Bottle: will save Magnus trips to the fountain since the mana rejuvenation works well with his low mana.

Magic Wand: will provide him both bonus attributes as well as more sustain.

Power Treads: besides, provide Magnus some attack speed, you can switch between strength for more damage or intelligence to cast more abilities.

Blink Dagger is very useful if you want to initiate the combat or catch the enemy carry. You can use it to gank any unguarded enemy to take the advantage before the teamfight.

Shadow Blade grants Magnus with attack speed and damage increases. With Shadow Blade’s ability, Shadow Walk, Magnus can get in or out the teamfight safely.

Force Staff can be used with Skewer to approach the enemy, to put yourself in a good position to cast Reverse Polarity or to run away.

Black King Bar: makes it easier for Magnus to use his ultimate as he can place himself in the middle without being interrupted

Refresher Orb: gives Magnus more regen and the ability to cast his ultimate in a shorter time period

A good target for Empower, if he has Battle Fury. Reverse Polarity is also a good set up for Mana Void

Another good target for Empower and one of the best sources of burst physical damage due to Stifling Dagger, Phantom Strike and Coup de Grace

Sven: is a perfect target for Empower, especially when with items that give attributes. Empower also stacks with Great Cleave. Reverse Polarity is also a good setup for Storm Hammer

Troll Warlord: the melee form skillset of Berserker’s Rage is the best target for Empower

Reverse Polarity can set up well for the Torrent and Ghostship combo. The hero is also a good target for Empower due to Tidebringer.

Rubick: he can steal Magnus’s abilities and use them on his allies.

Dark Ascension reduces vision for the enemy team, which makes it more difficult for Magnus to initiate with Blink Dagger and Reverse Polarity. It is also more likely that Night Stalker will scout out Magnus with Aghanim's Scepter and Gem of True Sight, after which he can silence Magnus with  Crippling Fear.

Shrapnel can sometimes scout out Magnus and also place his Blink Dagger on cooldown. Aside from that, Sniper likes to stay far back behind enemy lines, so it's difficult to catch him with Reverse Polarity unless you already have vision on him and can Skewer him to the rest of his team.

Treant Protector can usually scout out Magnus in the trees with  Eyes In The Forest and disrupt his initiation attempts. He can also counter Magnus' initiation with  Overgrowth.

Zeus can easily find Magnus who is often hiding in the trees with  Thundergod's Wrath and  Lightning Bolt, which allows him to warn allies and disrupt his initiation attempts.

Similar to Night Stalker, Venomancer can simultaneously scout Magnus hiding in trees and put Blink Dagger on cooldown with  Plague Ward, which gives Magnus problems when trying to blink in and initiate.

Disables Blink Dagger with her ultimate.

Tinker cand disrupt and disable Magnus’s Blink Dagger with March of the Machines and Heat-Seeking Missile, delaying initiation or force Magnus to use Skewer or Force Staff

You must focus on farming as much as you can. Use the Empower and Shockwave to farm quickly and clear the creeps. Remember to control the creep way in the middle of your lane or close to your neutral camps which can guard you against the gank from the jungle.Besides, Shockwave  is also good at harassing the melee enemies if they intend to get close to the creeps to farm.

If there is any teammate around you, you can find a good position to cast Skewer to push the enemy towards the jungle position and get the potential kill. When you already clear the creep wave in the mid lane, consider farming some jungle creeps to increase your golds.

Your priority is still farming but be ready to engage in any imminent fights.With the Blink Dagger, you can play a little bit more aggressive. After clearing the creep waves in your lane , you can start roaming to other lanes to get more kills and to destroy the enemy towers. You should use your ultimate carefully because the enemies are scared and not aggressive if your ultimate is up.

Your objectives in the late game are quite the same with the mid game but this time you drive your focus on engaging in the teamfight. With the BKB and Blink Dagger, you can activate these abilities, jump into the middle of the enemies and cast Reverse Polarity.

The opponents will be blown up instantly. When gaining advantage from the teamfight, you and your team should focus on the key objectives on the map like Roshan and Tower and snowball the game.