"I suffer the innocents and guilty alike. There are no innocents."

Offending a troll is as easy as lifting a hand. A bitter and contentious race, trolls enjoy quarrels and strife, without any excuse to raise their voices in arguments. Males mature in underground chambers located directly below where the eldest daughters live, fed and entertained while giving nothing. Usually the male remains like this for many years beyond adulthood, while the female head of the family provides care and nurture. When the young trolls were finally driven out of their underground chambers, they gathered with their comrades, forming rebellious factions that loudly complained about all sorts of troubles.

And no matter how much trolls love to argue, it seems rare that a troll is ostracized by his fellow humans because of his bad temper. The fate of the troll as above is named Jah'rakal, a merchant from the remote areas of the Hoven forest. So delusional, so cruel, and so cruel that even other trolls in the same boat could not stand it. In one snarky profanity when he claimed most of the spoils from his recent conquest, his comrades burst into dismay. Turned around, then beat him with a mace, then kicked him out of the camp. Frustrated with being chased, he returned the next day, armed with his vessel, and slashed at them all, one by one. And then he cut blood and swore: he will always be a force of war for himself. Now he roams the world in the name of the Troll-warrior lord, bitter and angry, a noble commander of a one-man army. 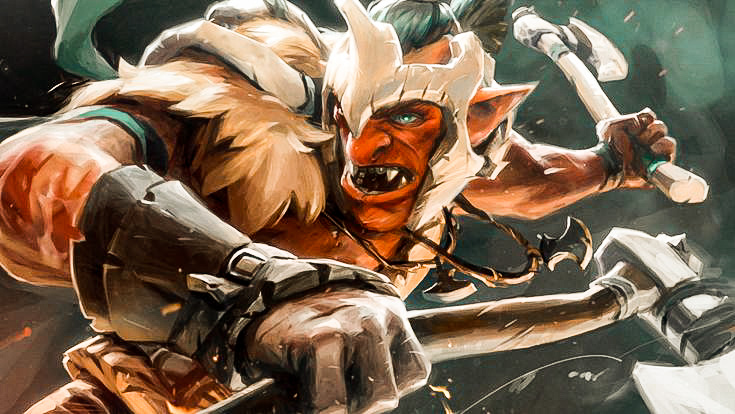 You should gain a point first on Berserker's Rage to get the ability to switch between ranged and melee. Then give priority to Whirling Axes to take damage and the ability to "stop lane" from this skill. The Fervor skill should increase by 1 point at first, which is quite enough for you to solo Roshan, please maximize this skill in late game.

Effect: Troll Warlord switches from ranged to melee attacks when engaged. Melee strikes have a chance to trap the opponent, making it impossible for them to move or use mobility spells. Berserker's Rage also improves movement speed, armor, and reduces the time it takes to attack. While Berserker's Rage is active, Whirling Axes has a distinct purpose.

Effect: Over 950 range, Troll hurls a handful of five axes in a cone form, delaying and damaging opponent units.

Effect: Troll gains enhanced attack speed with each sustained strike on the same target. When Troll switches targets, the stacks are reset to zero.

Effect: Troll instills a deep war trance in you, forcing you to constantly attack the next enemy unit within 900 range, with heroes taking precedence. During this phase, damage does not kill you. Bonus lifesteal, attack speed, and movement speed are all increased. Dispels with a Basic Dispel.

Magic Wand: The Magic Wand aids in lane survival against adversaries who can spam spells.

Black King Bar: Because Battle Trance only lasts 6.5 seconds, Black King Bar is essential on troll. Every second counts, as stuns and disables can render you helpless for several seconds, squandering the spell's power.

Morbid Mask: Morbid Mask grants lifesteal, which complements your fast attack speed. Obtaining this will let you take out Roshan on your own early in the game. It also upgrades to Satanic, which improves late-game survival.

Butterfly: Butterfly grants a significant increase in agility and attack speed, as well as evasion. Furthermore, the evasion paired with the blind offered by Whirling Axes gives a significant amount of survivability.

Abyssal Blade: Troll Warlord benefits from Abyssal Blade's stun and bash, which he may use to his advantage because of his fast attack speed. The item also provides damage reduction and health, allowing him to survive confrontations.

Satanic: Troll Warlord may strike foes without fear of dying and regain full health in a matter of a second thanks to Satanic active. The passive status resistance makes this item a must-have, as Troll Warlord dislikes being interrupted in battle so he can concentrate on one target.

Yasha: For extra movement speed and agility, Yasha is always a good choice. For more endurance, upgrade it to a Sange and Yasha or a Manta Style. For illusions, dispel, and disjointing missiles, Manta Style is the way to go.

Blink Dagger: Troll Warlord can use Blink Dagger to climb on top of foes and root and kill them. Swift Blink can be updated later.

Daedalus: Your assaults will cause a lot of damage thanks to Daedalus. Troll Warlord can focus on damage and gain numerous Daedalus to crit more often and lifesteal even more since his ultimate and passive allow him to achieve maximum attack speed.

Blade Mail: Due to Troll Warlord's tremendous physical damage and short health pool, Blade Mail is very effective against him.

Bloodthorn: Because all strikes on the Bloodthorn silenced target have True Strike, Bloodthorn can be effective against Troll Warlord.

Scythe of Vyse: Scythe of Vyse may be used offensively as well as defensively, as it disables and prevents him from killing or fleeing.

Rage uses Berserker to easily last hit. It increases your damage. Beware of high-damage nukes, this hero is one of the squishiest heroes on the map. Always keep an eye on your ward so you can easily see any movement from enemies to harm you. You need to farm as much as you can, so focus on last hits because you are your team's carry.

At this stage the whole team will roam around the map and find a few people to kill. Don't forget to buy the smoke of lies to hide the Observer Ward from enemies. You already have a few ganking skills here so if you want to start a gank you need:

This is your time to shine. You have reached the level here. It will provide many advantages from extra HP and attack. If you have completed the core objective, this means you are ready to crush your opponent in teamfights.

What you have to do here is: