“Storms gather at my fingertips”.

At the highest point of the Druud Plateau, the Disruptor was the first to decipher the secret of the summer whirlwinds. In the past few centuries, the highland Oglodi people have always struggled to survive on this endless plateau. They are the remnants of a great civilization, possessing the ability Stormcraft (I don't quite understand the term), which is found and assembled from fragments of a source of knowledge. suffered a loss that even they themselves cannot fully explain.

Although his status was still very small within the Clan, Disruptor was never afraid, he rummaged through forgotten structures, dilapidated libraries, even manufacturing workshops. has rusted. And then, he found what he needed and returned to the Clan.

Reinventing the coil designed from ancient times, Disruptor gains the power to manipulate lightning, and is capable of summoning lightning anywhere he wants. 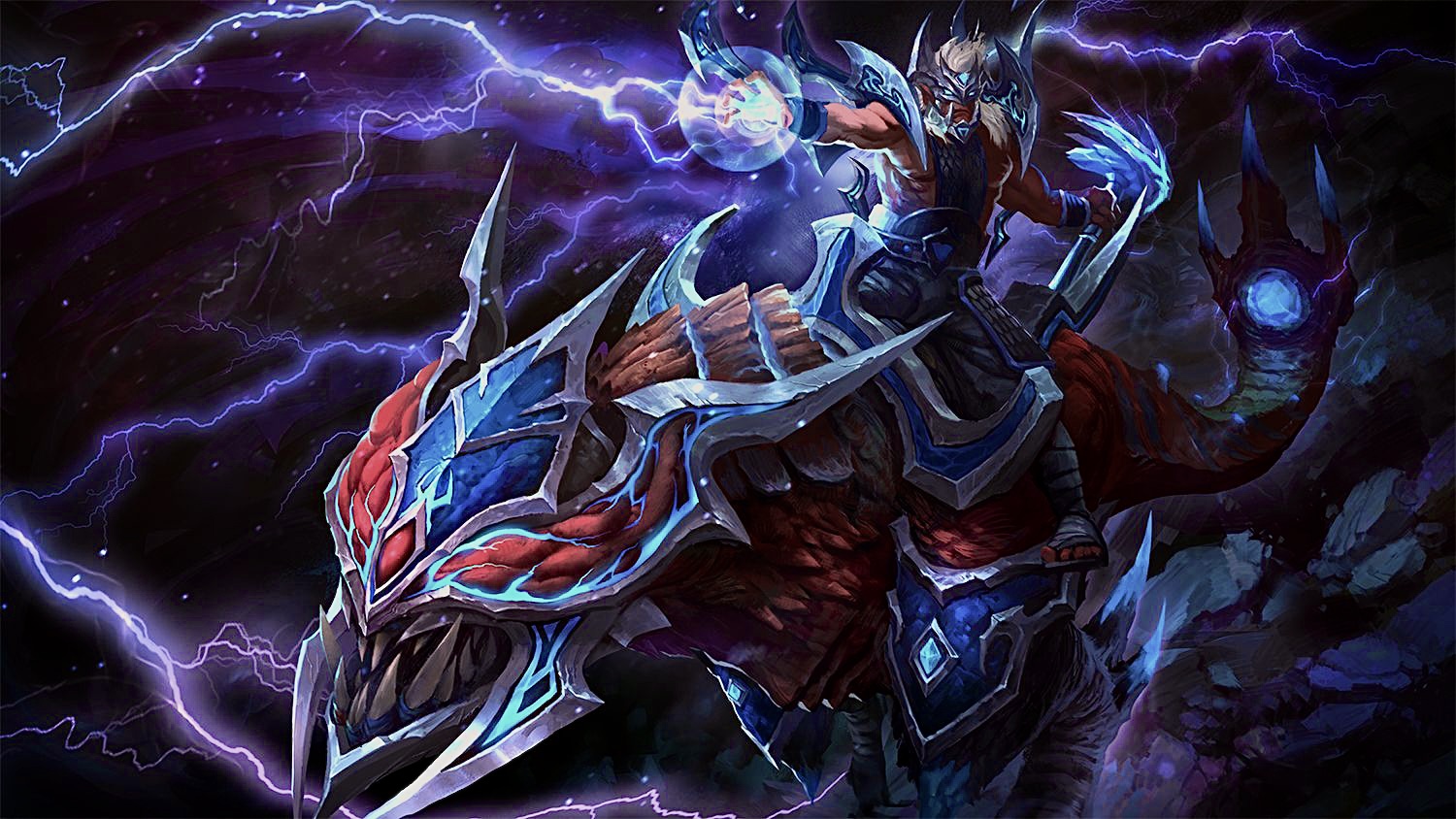 To optimize the ability of Disruptor, Q will be the move that you should upgrade first, because it can both poke and is the ability to bring the best damage.

Next comes E, then W and Ulti is upgraded according to the level milestones. That way, no matter what the situation is, you can handle it flexibly.

Effect: Creates a charged cloud on top of the specified enemy target, dealing 40/60/80/100 damage per lightning strike and spreading around the main target.

Number of recoils: 4 (1 time on cast and 3 subsequent times every 2 seconds.)

Effect: Returns the enemy champion targeted by this skill to its location 4 seconds ago. If it is a clone, the clone is destroyed immediately.

Note: this skill will show a light trail at the location where the enemy is brought back, from which you and your teammates can prepare the next combos.

Effect: creates a circular electromagnetic wall after a period of time at the specified location, enemies will not be able to move past this wall.

Duration of the wall to appear after casting: 1.2 seconds.

Effect: Creates an electromagnetic storm at the target location, silences enemies in it and deals damage every 0.25 seconds, the longer the enemy stands on the storm, the damage will increase for subsequent jerks.

Multiplier effect: also blocks the ability to use equipment if the opponent is standing in the storm.

Boots of Speed: Boots of Speed allow him to flee chasing opponents or close in to utilize Glimpse, which has a short cast range at first levels.

Magic Stick: Magic Stick gives any hero a surge of life and mana, allowing them to activate their abilities.

Arcane Boots: Arcane Boots expand Disruptor's mana pool and provide a mechanism for him to restore it while utilizing abilities.

Force Staff: Force Staff is less difficult to construct than Blink Dagger, and it has the ability to relocate oneself, friends, and opponents. Disruptor now has a larger mana pool to work with thanks to his increased intellect.

Glimmer Cape: Disruptor's Glimmer Cape allows him to move closer to adversaries to initiate on them, as well as deliver the same benefit to allied initiators. With improved magic resistance and invisibility, it may help defend teammates while fleeing.

Aghanim's Scepter: Static Storm may employ Aghanim's Scepter to mute foes on top of the quiet, preventing them from using abilities or items like Black King Bar as long as they remain within the area of effect.

Guardian Greaves: Guardian Greaves, made from Arcane Boots and Mekansm, replenish mana and health to teammates while also eliminating debuffs that may prevent Disruptor from participating in teamfights.

Urn of Shadows: Urn of Shadows gives him characteristics and mana regeneration, which helps him keep his mana pool up to date. During ganks or to heal teammates, the active provides extra damage.

Tranquil Boots: Disruptor is usually always at full health because of Tranquil Boots, which grant passive health restoration. The improved mobility speed lets him better position himself for using abilities and ganking.

Blink Dagger: Disruptor's Blink Dagger helps him to cover the distance quickly, and his short cast animation allows him to disable adversaries before they can respond.

Veil of Discord: Disruptors get characteristics and armor from the Veil of Discord. The active reduces opponent magic resistance, allowing Static Storm and allies to use magical nukes more effectively.

Rod of Atos: Rod of Atos boosts Disruptor's stats and provides him with additional mana to use abilities. Because of the active's great cast range, he may root adversaries from afar and build up Kinetic Field to severely restrict their movement. Cripple and Kinetic Field have minimal cooldowns, allowing Disruptor to utilize them frequently.

Pipe of Insight: Disruptor and teammates gain magic resistance as well as the ability to absorb magical damage from Pipe of Insight, providing them an advantage in battle.

Scythe of Vyse: Disruptor gains a hard disable from Scythe of Vyse, which he lacks otherwise. Aside from improving general attributes, notably intellect, utilizing hex on a target slows down their movement while also silencing and muting them, making it an excellent leading disable before employing Kinetic Field and Static Storm.

Manta Style: Thunder Strike is dispelled by Manta Style, and Glimpse is avoided.

You should determine whether you are going to roam or stick to the lane to protect your teammates from the beginning so that you can buy appropriate equipment. With roaming, you have the ability to catch people who are extremely disgusting, you and your teammates can easily kill when you can imprison the enemy for 2.4 seconds if used correctly. During the match phase, you always have to follow the Town portal scroll to support your teammates in time. How to combo I have instructed above.

This is the extremely frequent roam + gank phase when your team's gankers already have enough levels and basic equipment for ganking, and create space for your carry team to farm to the maximum, or go to that lane to help. it pushes the lane, counter gank if the enemy targets your carry team. The ability to catch odd with extremely long skill cast range, and can block the enemy from roaming with the Town portal scroll thanks to Glimpse, so this is a golden period for you to make money with the team's gankers. Remember to plug your eyes fully.

This stage you go with your teammates, fully ward, use Smoke of Deceit to gank single targets or start a teamfight by surprise, creating conditions to proceed to destroy the opponent's Ancient or push 1 lane, force the opponent to def turret or have to fight (remember to still buy wards). You can act as an initiator in teamfight. When you have Force Staff or Blink dagger, your ability to catch people is pushed to the next level, but during this phase, you should capture targets without bkb to maximize your teamfight advantage (rather than catching the shopper).

Bkb just wasted effort because it didn't have time to pull it back, it already turned on bkb, the ultimate with a green stick won't work in this case). You should place the ring correctly in the teamfight then add Static storm to the ring to isolate the enemies standing inside, create safety as well as overwhelming your team (mainly the enemy's backline). , like carry, nuker, support). Disruptor, if you know how to use it properly, the ability to carry the team of this support is very high.