As a champion from a desert sandstorm, Sand King can deal massive amounts of damage in combat even though he doesn't have too much equipment. The only weakness of this champion is that in order to deal damage, he needs a period of chanting and easily becomes an "all-or-nothing". So let's understand the game of Sand King to be able to master the king of this desert!

The grains of sand in the Scintillant Desert have life and sentience-the vast desert is wondering and pondering what can only be hidden in its own greatness. But when it was forced to find a form to communicate with the lower, it released a fragment of itself, burrowing into the magical armor created by Qaldin's demon god. This being called Crixalis, meaning 'Soul of the Sand', but others feared it as the Sand King. The Sand King took the form of a giant scorpion, inspired by the small but ubiquitous inhabitants of the Scintillant Desert; and this form accurately represents his ferocious nature. Guardians, warriors, messengers-Sand King was all of that, and could not be separated from the endless desert that gave it life. 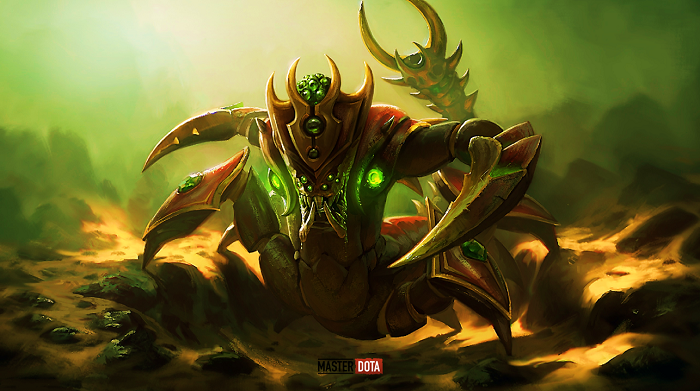 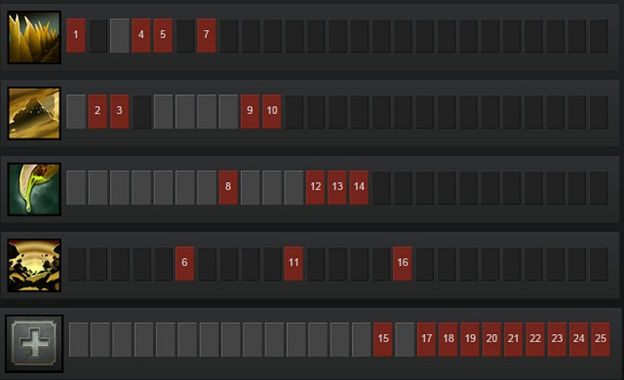 As a Roamer - Supporter, control is extremely important, so we will maximize Burrowstrike (Q) first, get 2 points of Sand Storm (W) to be able to hide to escape or deal damage. Caustic Finale (E) gets 1 point at level 8, then finishes all Sand Storm (W) and then max it out. Ultimate Epicenter (R) gets the right level and finally Stats.

Effect: The Sand King burrows into the ground and tunnels forward in a straight line, then damages and stuns enemies as he emerges.

Effect: Channeling skill - Sand King creates a terrifying sandstorm around and invisible within it and deals damage over time to enemies in the area. Invisibility remains in effect for a short time once the sandstorm ends.

Stealth after the storm ends: 1.5 seconds.

Passive: Sand King's basic attacks inject poison into his target and cause the poison to explode when they die, dealing damage to the surroundings.

Duration of the injection effect: 8 seconds.

Effect: After 2 seconds of channeling, Sand King creates an earthquake with multiple shocks, damaging and slowing all enemies in the area. Each subsequent shock will increase the radius of impact.

Magic Stick: All support heroes, including Sand King, benefit from Magic Stick. He can restore a huge portion of his HP and mana with a fully charged Magic Stick, with the mana allowing him to perform Burrowstrike one more time to flee or guarantee a kill.

Magic Wand: Sand King gains additional qualities and the ability to store more charges with the Magic Wand. The burst mana regen is especially significant because Sand King's mana pool is limited during the game, so having enough mana to fire his spells is crucial.

Arcane Boots: Sand King's Arcane Boots are designed to boost the amount of his own mana pool while also allowing him to restore his own and his allies' mana, which is a critical role for a support. Because Epicenter necessitates a large quantity of mana, Sand King must increase his mana pool in order to effectively start with his ultimate.

Blink Dagger: Sand King should develop Blink Dagger first since it dramatically increases his reach and mobility, letting him to begin with Burrowstrike or Epicenter. Sand King, when used in conjunction with Burrowstrike, may quickly leap on and cripple an adversary from a distance of up to 2000 meters.

Force Staff: Sand King benefits greatly from Force Staff, as it helps him to displace himself even more on top of Blink Dagger and Burrowstrike. It may increase his initiating range to 2600 (3250 with Aghanim's Scepter), as well as enabling him to displace friends and/or foes in combat. It also grants him intelligence, increases his mana pool, and provides him with a little bit of HP regen.

Eul's Scepter of Divinity: Eul's Scepter of Divinity is a powerful utility item that may be built on Sand King. It grants him additional mana and mana regen, allowing him to virtually ignore his mana needs. It also boosts his base movement speed, giving him even greater mobility. The active ability can be utilized on foes as a secondary disable or on Sand King for temporary invulnerability, such as after a successful Epicenter combination.

Town Portal Scroll: The Town Portal Scroll is essential for all heroes to have. Being able to walk up to any encounter and add Blink-Burrowstrike to the mix may be a huge advantage for Sand King.

Sand King's total stats, notably his HP and mana, are improved by the item, giving him better survivability during an initiation.

Radiance: If your early game net worth is high, Radiance is an item to prioritize for Sand King. Sand King has one of the greatest DPS AoE combos in the game when combined with Sandstorm. Radiance helps Sand King to burn waves down, as he is already a strong split pushing and wave-clearing hero.

Radiance is a perfect fit for Cryxalis since he is a sneaky hero who is difficult to catch and kill, and he is likely to stay alive for long teamfights, enabling him to stack his Radiance burn. The increased attack damage works well with his Caustic Finale, allowing him to more successfully right click foes.

Veil of Discord: Sand King's Veil of Discord is a powerful utility item since he can cast it right before blinking in with a Burrowstrike-Epicenter-Sandstorm combination.

Blade Mail: Blade Mail is a useful mid-game equipment for Sand King survival. Sand King's mana pool is bolstered by the intelligence increase, and his armor and active can help him survive in teamfights if the adversary chooses to target him.

Shiva's Guard: Sand King receives massive physical damage resistance, as well as additional slow and damage nuke, thanks to Shiva's Guard. Using the active in conjunction with Epicenter may significantly slow foes down, keeping them within the ultimate's radius.

Black King Bar: Sand King may channel his ultimate without fear of being stopped by most opposing spells if he uses Black King Bar. If you can't rely on making clean initiations or need to perform more in a teamfight without getting disabled, it might be a useful item to have.

Sand King should go with a Roamer – Long arm supporter to roam or can also support Carry farm in lane. Use Ward with Smoke to get effective ganks. Burrowstrike (Q) is the opening skill of each gank. If you're not familiar with the hand, you can click on the champion to completely stun the enemy, but if you are proficient, using them as a directional skill can be more surprising. Block their path for teammates to release skills because besides Burrowstrike (Q), Sand King is no longer able to control opponents in the early game.

Before, you were still the one who plugged/destroyed the ward, roamed the gank lane, but it took a while to stack creeps or farm to accumulate money on Blink Dagger. Sand Storm (W) is both a farming tool and a good escape. But be careful if the enemy has Dust or Sentry. Burrowstrike (Q) can also cross terrain to escape, so it can save you in certain cases.

Sand King has 2 ways to start the fight, one with Burrowstrike (Q) and the other using Epicenter (R). With Burrowstrike (Q) you need to make sure that when you stun the enemy, you immediately use Epicenter (R), but be careful around anyone who can destroy your ultimate. With the second method, you will go for Epicenter (R) in a place out of sight, as soon as you have done it, you use Blink Dagger to fly into the fight, these are more effective but need to be done quickly because otherwise will there are a few shocks left in the shadows before you fly in.

During Epicenter (R), you can use Burrowstrike (Q) to hold the opponent, or Sand Storm (W) to hide and still deal damage, depending on the combat situation.