+30 Wrath of Nature Base Damage

"I woke within the seed and saw my destiny, and many were its branches."

Verodicia, Goddess of the Woods, realized that her own time had come to an end and that, like one of the leaves whose fate she had imprinted in the seed, she would fall without witnessing the realization of her dream after finishing filling in the green spaces, planting the coiled-up spirit in the seed, luring the twining waters from deep within the rock, and swearing the sun its full attention to the growing things. She was sad to leave the world empty because the sprouts were still in the soil and were therefore delicate and susceptible to all kinds of harm. One final seed that she had overlooked during the sowing was discovered in her seed pouch.

She only uttered one word into the seed, which she then swallowed as she fell. Her enormous body rotted away over the long winter, turning into humus that would nourish the seedlings the following spring. That final seed ripened and burst in an instant on the morning of the vernal equinox, before the rest of the forest had even started to awaken. In full leaf, strong and wise, with the ability to predict where he would be most needed to defend the green places and anyone who might be fortunate enough to call him an ally Prophet Nature emerged from it. 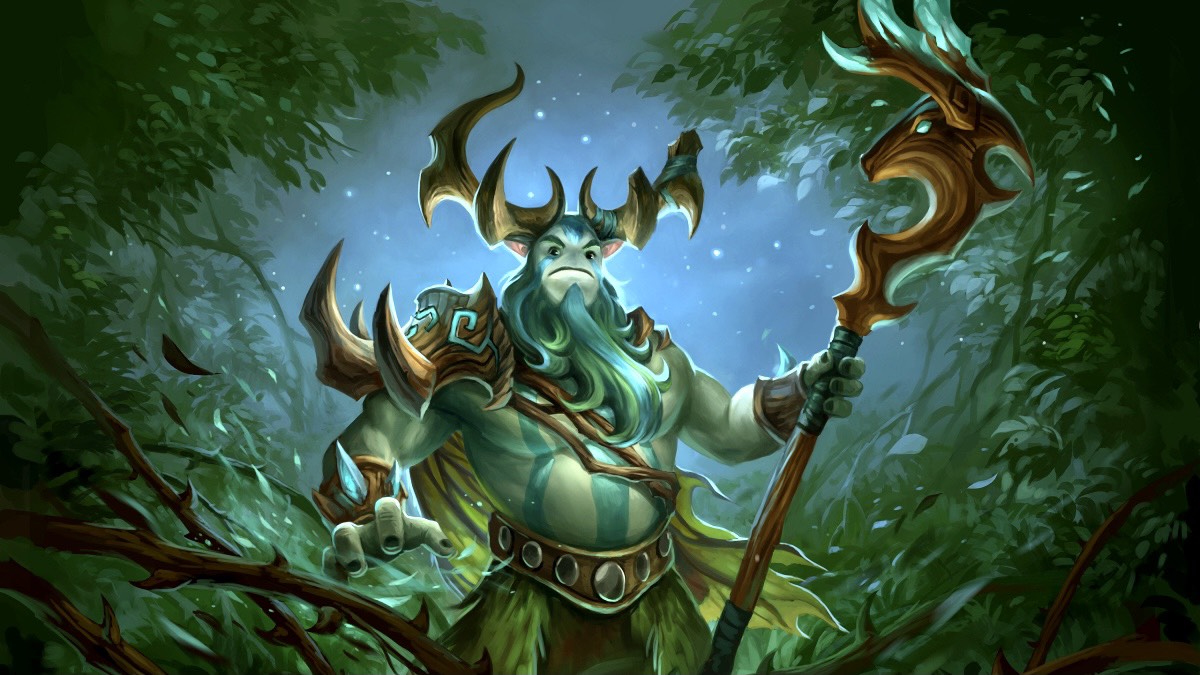 Effect: A unit is surrounded by a ring of trees that grows, trapping it and giving it vision out to 250 yards.

Effect: Relocate to any location on the map.

Effect: Under the direction of Nature's Prophet, transforms a forest of trees into Treants.

Note: As many Treants as there are trees in the targeted area can be produced by Nature's Call.

Effect: Enemies nearby the cast point who are in vision are hit by damaging energy as it bounces around the map. Damage increases after the first enemy hit. When an enemy is killed by this spell, you receive bonus damage for 50 seconds.

Magic Stick: Gives him a burst of health and mana that can help him survive an enemy gank or give him enough mana for one more spell.

Boots of Speed: Increase Nature's Prophet's movement speed, which is necessary for him to catch up to enemies during ganks and cast spells. Despite his strong global mobility in Teleportation, it's essential for him to move quickly enough to change positions during battles.

Town Portal Scroll: Increases the mobility of Nature's Prophet worldwide. A Town Portal Scroll enables him to move quickly between the front and backlines while defending a tower or ganking. Teleportation already gives him global presence without the need to target his destination at an allied building.

Magic Wand: Give Nature's Prophet more attribute bonuses, as well as more burst health and mana regeneration. Even when completely empty, a fully charged Magic Wand can provide Nature's Prophet with enough mana to cast any of his spells.

Power Treads: Give Nature's Prophet an increase to his stats and more attack speed. He can increase his health, mana, or base damage by using the attributes.

Shadow Blade: Increases Nature's Prophet's ability to initiate and flee, strengthening his already powerful global presence due to teleportation. When used offensively, Nature's Prophet can deal unwary enemies a potent first blow before disabling and focusing them down. When used defensively, the invisibility and faster movement allow him to avoid enemy rotations intended to stop his pushes and can be used to cast Teleportation while remaining invisible.

Orchid Malevolence: Is an effective pre-aggression tool. It is quick to obtain in the early game thanks to its low cost and simple buildup, and the bonuses it offers Nature's Prophet's physical attacks and let him effectively gank enemies by making them incapacitated. He can spend more time on the field without having to return to base as often thanks to the mana regeneration.

Nullifier: Complements Orchid Malevolence's silence with its dispel, which disables enemy options to disengage and slows them down so you can catch up, eliminating the risk when engaging a dangerous foe in combat.

Assault Cuirass: Is a strong offensive and pushing weapon. Auto attacks become much deadlier by increasing his attack speed and giving towers and other enemy units a negative armor aura. He is also more resistant to physical harm thanks to his increased armor.

Silver Edge: Enables Nature's Prophet to break important passives or simply add more damage by virtue of its crits. It is an upgrade to Shadow Blade.

Scythe of Vyse: Additional lockdown is provided. When combined with Sprout, it becomes a very potent ganking and disabling item because the enemies cannot cut the trees or escape from them. Also appreciated are the extra stats.

Bloodthorn: Is a fantastic improvement over Orchid, increasing damage output.

Hand of Midas: Obtaining this early, at the expense of early aggression, can significantly increase his late-game potential by accelerating gold and experience gain. Additionally, to increase damage per second, the bonus attack speed will make use of disabler abilities.

Scythe of Vyse: Gives Nature's Prophet a hex ability, giving him another way to control enemies' movements on top of Sprout, greatly increasing his ganking power. Along with giving him more damage and mana, as well as all-around attributes and potent mana regeneration, it also significantly raises his intelligence.

Aghanim’s Scepter: Increases the power of Wrath of Nature, reducing its cooldown and giving all enemies it hits a root.

Phase Boots: It can increase Nature's Prophet's threat in ganks by enabling him to move into position more quickly after casting Teleportation, to corner an opponent with Sprout, and deal more devastating attacks. It also increases his attack damage.

Desolator: Can significantly increase the offensive and pushing potential of Nature's Prophet. His physical attacks are much deadlier due to the targets' increased damage and armor reduction; this lets him soften gank targets or lower tower armor to speed up pushes.

Drum of Endurance: Due to its active, which increases the movement and attack speed of himself and allies, assists Nature's Prophet in ganks and pushes.

Force Staff: Depending on the circumstance, can be a useful item to purchase on Nature's Prophet. By enabling him to swiftly change positions, it can improve his mobility by enabling him to do things like push himself off a cliff, move allies, or break Linken's Sphere on a gank target before other disabilities.

Blink Dagger: Can significantly improve Nature's Prophet's ability to dodge enemy ganks and move around. The Blink Dagger can be used to instantly jump away to evade any enemies trying to rotate in after using Teleportation to get to a lane for a push. On gank targets, it can also be used to initiate more quickly.

Dagon: Gives Nature's Prophet considerably more ganking power because he can instantly reduce a portion of a gank target's health, increasing the likelihood of successful kills. His capacity for farming and killing also enables him to upgrade it, ensuring that it is effective for the duration of a game.

Mjollnir: Is a potent all-purpose pushing and combat item. Nature's Prophet can quickly dispatch creep waves thanks to his greatly increased attack speed and attack modifier, which also boosts the power of his attacks during ganks and teamfights. By processing the shield, the active can be used to increase damage output.

Boots of Travel: Allows heroes to teleport to the defense in the event that Natures Prophet attempts to split push.

Heaven’s Halberd: Because his basic attacks are his only source of damage other than Wrath of Nature.

You have a lot of right-click output in the early game, so feel free to harass the enemy while also farming the lane. Upgrade ultimate without a doubt when you reach level 6, as it hurts a lot in the early game. Simply cast your ult whenever your team is fighting for kills, as this ability allows you to secure kills. You can also use your teleport to snipe the courier.

Because you are the strongest in the mid game, feel free to jump on enemies to gank. Teleport to the enemy and request assistance from your teammates in ganking them. Remember to teleport to a team fight and assist your teammates if you are strong. If you see a creep wave pushing, you can teleport to that lane and push it out.

In the late game,you are comparably weaker  so avoid engaging enemy heroes one-on-one and always move in groups. If you think your team isn't going to win a particular fight, don't enter like you're in the middle of the game; instead, go push the other lanes. If you think your team is winning, enter and support them. As I previously mentioned, you are significantly weaker in the late game, but your troops are at the peak of their abilities, so always split push. Push the lane whenever the opposing team is not noticing you, such as when they are engaged in bottom-to-top combat. This will either force the opposing team to also tp top and.