“You can learn faith at the end of a sword.”

Born in the godless wasteland of Hazhdal Barrens, Chen grew up among tribes of outlaws who struggled to make ends meet in the blazing desert sun. Using ancient techniques to manipulate animals, Chen's tribe tamed the hardy desert locust, a stunted breed of earth dragon that can melt desert sand into glass tubes to store water, which is extremely precious in this place where it only rains twice a year. Always on the verge of starvation and thirst, having to fight for each other and fight with neighboring tribes to survive, Chen's tribe made the mistake, on that fateful day, by choosing the wrong group. travel to attack.

In the fierce battle that followed, Chen's tribe was completely overwhelmed. The paladins Knights of the Fold in full armor annihilated the locust with ease, the attackers falling layer after layer. When the dragons fell, the people of the Clan suffered the same fate. Chen had fought, struggled, scratched, torn to pieces – it was supposed to happen. But no, kneeling in the posture of a defeated man, he faced the execution with extraordinary composure, neck stretched out ready to take the blade down. Moved by Chen's bravery, the executioner stopped his sword. Instead of his head being removed from his neck, Chen was given a choice: Die or convert. Chen embraced the new faith with extreme brutality. He joined the knight order and received uniform rank after each bloody conversion conquest. Now, with a convert's fanaticism and his ability to manipulate animals at their peak, he hunts down the unbelievers and enlightens them to ultimate enlightenment. 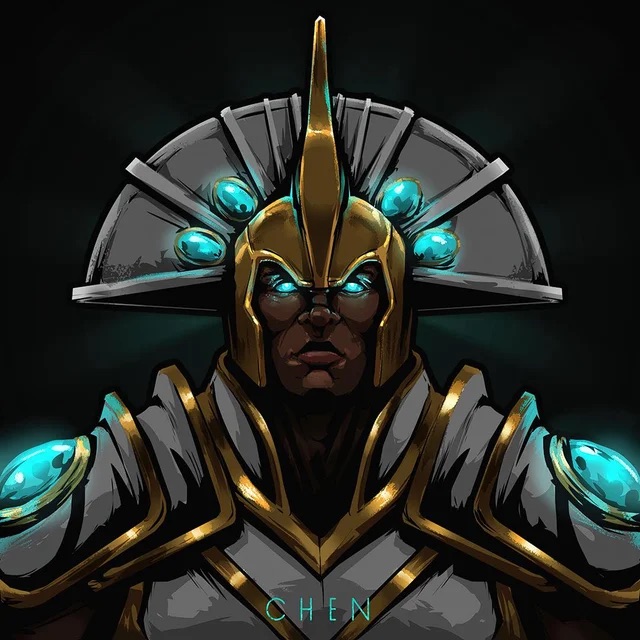 Effect: debilitates the target, causing them to have their movement speed reduced and take extra damage if attacked during the skill's duration.

Effect: himself as an adept herder, with this skill, Chen can capture enemy units or monsters, and increase their health.

Effect: heals all allied champions and units under Chen's control on the entire map.

Boots of Speed: Chen's Boots of Speed increases his movement speed, which is useful for getting between jungle camps faster and rotating for ganks with his creeps. Getting close enough to cast Penitence on an enemy hero can cause them to slow down enough for follow-up attacks.

Medallion of Courage: When paired with Penitence's attack speed bonus, Medallion of Courage delivers an armor debuff to hostile targets, allowing you to kill them faster. It also gives an ally unit an armor boost, which may allow them to take tower blows while pushing. If Chen desires the slow, he can upgrade the item to Solar Crest later.

Arcane Boots: Chen's and his creeps' mana pools are replenished by Arcane Boots, ensuring that abilities are always available to use. Additionally, keeping teammates' mana pools full helps them to utilize their abilities more frequently, which is beneficial when pushing towers.

Mekansm : When Chen buys Mekansm early enough, he may swiftly knock down towers while healing his creeps and allies, preventing the enemy from simply defending. It grants Chen an extra ability to heal his team in teamfights, in addition to Hand of God and Divine Favor.

Guardian Greaves: Chen saves an inventory slot by wearing Guardian Greaves, which combines Mekansm and Arcane Boots. Chen's squad has a survivability advantage in battles thanks to the aura, while the active heals them, restores mana, and removes debuffs on Chen that may be hindering him from helping his team.

Holy Locket: Holy Locket is a good choice because it boosts your HP and Mana pool, adds some extra stats, boosts HP regeneration, and has an active that restores up to 300 HP and mana when fully charged. The true power of this item comes from the 35 percent heal amplification it provides, which also applies to Mekansm and Guardian Greaves; this item grants massive burst healing, considerably improving your survivability and supporting abilities.

Sentry Wards: Sentry Wards should be acquired in tandem with Observer Wards on a frequent basis to prevent enemy map visibility. Additionally, they may be required to clear any opponent wards that are obstructing Chen's neutral camps and preventing him from farming during the laning stage.

Vladmir's Offering: Vladmir's Offering is a powerful teamfight and pushing aura that benefits Chen's creeps and allies significantly. The armor aura boosts their resistance to physical attacks and tower hits, while the mana aura allows them to recover mana more quickly for casting spells. Creeps, both converted and friendly lane creeps, as well as heroes, can use lifesteal to keep their HP during pushes and become a stronger danger to towers.

Drum of Endurance: Chen gains qualities from the Drum of Endurance, including increased durability and a greater mana pool. Chen and his creeps may be able to move more quickly as a result of the active, allowing them to track down a gank target or flee opposing pursuers.

Pipe of Insight: The Pipe of Insight is an extremely effective teamfight item. It increases Chen's magic resistance while also giving an aura that provides health regeneration and magic resistance to his team and creeps. The active may be employed to defend his congregation, preventing the enemy from exploding them with magic nukes in an instant.

Solar Crest: Chen can use Solar Crest to provide an armor debuff on an adversary from a distance. Chen may also use it to offer armor, attack speed, and movement speed to ally targets, keeping them alive and bolstering them during clashes and pushes.

Ghost Scepter: Chen may use the Ghost Scepter to temporarily avoid physical damage, which is useful for increasing his combat durability. Chen's inability to attack poses little of a problem for him because he prefers to use his spells and his creeps' abilities over physical combat.

Glimmer Cape: Chen may use the Glimmer Cape to shield his allies from the enemy by cloaking them in invisibility and enhancing their spell resistance. The active can also be used on a converted creep to assist it in approaching an adversary in order to launch a disable.

Force Staff: In Chen's hands, the Force Staff is extremely strong. It increases Chen's intellect and life regeneration, making it easier for him to cast spells. The active can swiftly reposition Chen to initiate or flee, and teammates can do the same. The active may also be used on a creep to give it a rapid burst of movement to get it close enough to deactivate it.

Eul's Scepter of Divinity: Eul's Scepter of Divinity is a low-cost mana item that provides Chen with a number of useful abilities. Chen's increased intelligence and mana regen allow him to cast spells more frequently, while the bonus movement speed aids in ganking, chasing, and escaping. He can also use the active to make himself temporarily invulnerable if he is jumped on by an enemy, to remove debuffs from himself, or to disable an enemy long enough for a creep to disable them further.

Heaven's Halberd: Chen's Heaven's Halberd is a survivability and support item that increases his usefulness. Chen can escape opponent assaults thanks to his increased strength, status resistance, and evasion, and the active allows him to disarm the enemy from a distance, stopping them from striking.

Shiva's Guard: Chen gains a powerful teamfight aura as well as powerful benefits from Shiva's Guard. The increased intellect boosts his mana pool significantly, while the armor boosts his physical damage resistance. The aura makes opponent assaults less effective, and the active ability can limit their movement speed and apply a damage nuke to them.

Scythe of Vyse: Chen gains all-around traits and considerably enhanced casting ability with Scythe of Vyse. Chen gets a targeted immediate hard-disable from the Hex, which is extremely useful in teamfights and ganks because it can create chain-disables with Chen's creeps.

Shiva's Guard: The converted creeps' damage output will be considerably hampered by Shiva's Guard, while Chen and his creeps will be easy targets thanks to Arctic Blast slow.

Dagon: Chen's teammates can be rapidly killed by Dagon's Burst damage before he can unleash Hand of God.

Hand of Midas: Converted creeps are instantaneously killed by Hand of Midas, and a farm is granted in the process.

Manta Style: Penitence is dispelled by Manta Style, which might cause Chen to spend spells on illusions.

Shadow Blade: Heroes can use Shadow Blade to go through Chen's creeps and kill him.

Radiance: All of Chen's converted creeps will be subjected to Radiance's area damage.

Catch the necessary jungle monster that I mentioned above, if it's too small, just pick the biggest one, you need to get to lvl3 early to catch more, then your jungle ability will be getting boosted, and ganking is also good thanks to the two of them. Chen jungling is quite economical, but it is very mana waste, you can buy more mango (Enchanted Mango) to bite in necessary cases. Remember to clear runes regularly, make sure to see you and a bunch of bull-faced brothers, no one dares to be aggressive in the early game. Don't forget to stack camp to earn more money and exp.

This is the period when you gank often. With the Test of Faith teleport skill, you can switch lanes and still make sure you have followers, or use this skill to send teammates back (as a free Town portal scroll) in cases of need. When you raise the Penitence skill, the ability to stack damage of your teammates as well as yourself will be increased. Pay attention to the minimap regularly so you can use your ultimate in time to support your teammates when you can't get there. Don't forget to keep an eye on and follow the Town portal scroll.

At this stage, you should accept to give up farming and go with your teammates to be able to participate in timely combat as well as push the turret push. You and your team's support should assign each other warding as well as using Smoke of Deceit to ensure vision as well as hunt down important enemy targets to have the greatest advantage in teamfights and take down towers. Chen's ability to initiate team fights is quite poor (due to the underdogs) so it's best if you put your team's initiator in first, you're just behind the buff, pull him up to fight and then discharge his skills.

The chaotic combat is also an opportunity for you to pull him to aim at weak targets of the enemy, typically supports and a few nukers, pull him up and attack them or force a corner to prevent them from fighting. Chen's ability to push is quite strong, especially when he has a green stick, but don't think that your brother is a buffalo, you have the right to fight tigers, watch out for all of them to use. How to use it, I said above.