” It is only right that I am cast into this world, for I had a hand in breaking it.”

Have you ever wondered, “How did this world come to be?”. “Why is it that of all the worlds created, only this one has such strange properties, with a diverse and mixed collection of creatures, societies and civilizations? The answer – someone will whisper to ask the Titans.”

The Builders have been here since before the Beginning – if not born at the same time as reality began to take shape. Walking with the first energies of the universe, their wish is nothing more than to continue the work of creating reality with their own hands. So they buried themselves in the forging of matter according to their own will: beating and heating, bending and blowing.

Until matter was no longer a difficult challenge, they turned their focus to themselves, forging mind and soul until becoming a creature of extraordinary endurance. And in the end, reality becomes the ultimate goal of their career. However, in this great career, they did it wrong from time to time. Because when ambition is too big, mistakes are inevitable.

The man we know as the Elder Titan was a great pioneer who thoroughly studied the forging of reality. While practicing his skills, he smashed something he considered uneditable and threw it aside. But then the Elder Titan fell into the very world he had destroyed, along with his broken soul. Here he rummaged through jagged patches of space and fractured planes, along with other fragments that had fallen through the fissures of the starting universe.

And this is precisely why the world as we know it is like a collection of drifting pieces, the remains of a long-forgotten mess. Forgotten by everyone else, except for one who always blames himself. He spent his eternity trying to find a way to fix the world, so that he could find the rest of his soul, so that we and the whole world could be healed. This is the Elder Titan we know. 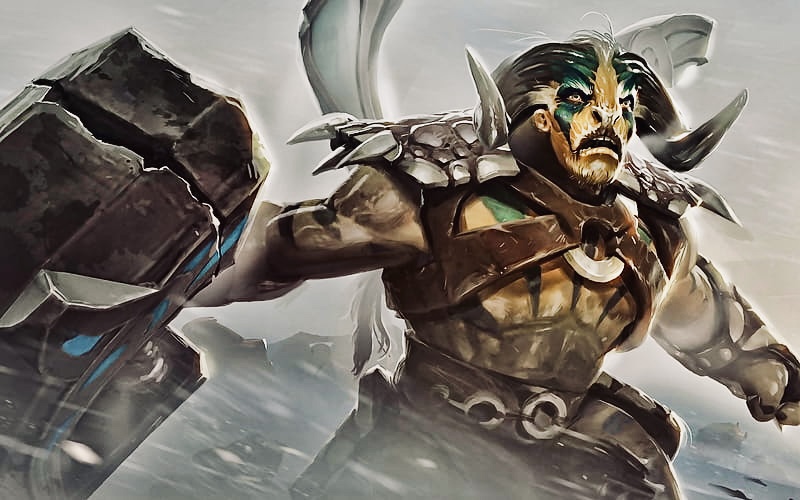 Alternately raise Echo stomp (Q) and Astral Spirit (W) to perform combos that cause the most control time and poke the enemy, and ET can also farm with Astral Spirit (W). At later levels, you take the Natural order (E) note because at this point the opponent has quite a bit of armor and magic resistance, so this skill will maximize its effectiveness. Ultimate of course get the correct level.

Effect: Raises foot and stomps the ground after a period of preparation, dealing 80/90/100/110 damage and causing enemies in the area to fall asleep for 1 time.

Note: when ET stomps but the Astral Spirit skill is not available or not used, ET creates an Astral Spirit that stands at his position and stomps, the damage from the Spirit is magic damage.

Effect: release a soul at the specified location. This spirit is controllable, traverses terrain, and can use ET's Echo Stomp, which deals 60/90/120/150 damage to all enemies it passes through once only. Best. After reactivating this ability or its duration expires, this spirit returns to ET, granting him 1 bonus damage and movement speed based on the number of enemy units hit.

Bonus Movement Speed: 1% per minion and monster, 5% per enemy champion.

Note: the base armor here is the starting armor + armor bonus from the Agility stat (including the Agility stat plus from the item), the bonus armor from the equipment that adds straight armor (like Ring of Protection, Chain mail, Plate mail,…) are not affected.

Effect: Creates a crack that runs slowly across the ground in the specified direction, after a period of time, the crack breaks, dealing damage equal to 30/40/50% of his maximum health. Enemies standing in the crack's area of effect also draw them back to the crack's centerline then slow their movement speed.

Note: half of the damage this skill deals is magic damage, the other half is physical damage.

Effect: The Astral Spirit is returned to Elder Titan.

Magic Wand: Elder Titan gains traits from the Magic Wand, as well as a way to swiftly restore life and mana.

Tranquil Boots: Astral Spirit can traverse through more units with the help of Tranquil Boots, which gives health restoration and enhanced movement speed.

Soul Ring: Elder Titan's ability to cast spells may be considerably enhanced by equipping a Soul Ring, which allows him to drain mana from his health pool.

Rod of Atos: Rod of Atos has strong health and mana-boosting abilities, and the active root can set up Echo Stomp or Split Earth.

Lotus Orb: Elder Titan's tankiness is increased by the Lotus Orb, which gives armor and health restoration as well as mana regeneration to power his spell casting. Echo Shell can be used on an ally to prevent the adversary from casting specific spells on them, or on Elder Titan himself to boost his durability when fighting directly against the enemy.

Shiva's Guard: Shiva's Guard is a powerful physical survival item that offers Elder Titan extra intelligence for casting spells as well as an active slow that helps him. Slowing down the opponent can make it more difficult for them to flee, enabling Elder Titan to catch up and apply his Natural Order aura, or it can be piled on top of a successful Earth Splitter to keep the enemy clumped together.

Orb of Venom: Elder Titan's assaults are slowed by the Orb of Venom, allowing him to maintain Natural Order while hunting down adversaries in the early game.

Arcane Boots: If Elder Titan is being constructed to spell rather than brawl, Arcane Boots will come in handy. It expands his mana pool and allows him to restore his own and his teammates' mana, substantially improving his utility and ensuring that he always has enough mana to perform spells in combat.

Force Staff: If Elder Titan is created in a support-utility capacity, Force Staff provides several advantages. The item's components are simple to assemble, and it improves his mana pool while also providing some health regeneration and an active that aids in placement, which is important for casting spells.

Glimmer Cape: The Glimmer Cape gives invisibility and resistance to magic, allowing you or an ally to flee.

Vladmir's Offering: Vladmir's Offering is a high-durability Elder Titan item with good accumulation because of the low cost of its components. It delivers an armor aura that increases Elder Titan's and his allies' resistance to physical damage, as well as damage and lifesteal auras that provide significant advantages in teamfights. Elder Titan's mana pool is also maintained thanks to the mana regeneration.

Pipe of Insight: Pipe of Insight protects Elder Titan and his comrades from magical damage while also letting him participate in teamfights and use Natural Order against the adversaries.

Aeon Disk: Aeon Disk might negate your combo's damage and make it difficult to finish off your targets.

Elder Titan is quite passive in the early game due to his skills needing a smooth combination and very difficult to use, but once he reaches level 7 on, he is really dangerous in the opening of teamfights. Elder Titan can go hard lane or dual lane, tri lane. It is necessary to have enough levels to be able to exert power. The combo is also simple, but requires precise timing and location: shoot Astral Spirit (W), choose a position then use Echo stomp (Q) and use ultimate. Going roam / gank, you just need to use combo 2 moves is enough, if necessary, use ultimate. You can use Soul to scan questionable locations, detect opponents, or block some directional skills.

At this stage you have to know the balance between farming and roam/gank. The Town portal scroll is an indispensable item in your inventory.

You are an initiator, so leaving the squad at this stage is extremely dangerous if your teammates are beaten down or forced to fight without people, what you need to do is use your skills correctly. to arrange the most beneficial combat for your team. When you have a Refresh orb and a standard combo for the first turn, up to 96.69% of the next combo will hit (if you have enough mana), then make sure the opponent will run away or wait for your team to collect them all because ET is an Initiator extremely strong.