“I am the intermediary between life and death.”

Born in the Bleeding Hills, Rhasta was just a tiny creature that was starving to death as it was carried by a con man who happened to be passing by. With only two coins, the swindler will tell you your luck. Pay three dollars, he will castrate pigs for you, pay five dollars, he will circumcise your son. If it's a good meal, he will put on a shaman's outfit, chant spells from ancient books and curse enemies for you. The strange little creature with the shaman's name, carrying half of the mountain troll blood, the other half... is what breed, no one knows, acting as an assistant and contributing to the strange appearance of fake spells.

Always one step ahead of the customers who ate the donkey, before the guests aggressively pursued a village, the two teachers and students traveled together through the barren lands until one day, the con man recognized the child. farming can actually do what he pretends to show the world. It possesses a special ability – an ability that the con artist's clients appreciate very much. From there, Rhasta was brought out to perform in front of a crowd, and so the nickname Shadow Shaman was born. The two continued to travel from town to town, casting spells to earn money while Shadow Shaman's fame spread far and wide.

In the end, the old trick-or-treating guests found their whereabouts, and the two were ambushed by an aggressive mob who were scammed for money. The con man was murdered, and for the first time in his life, Rhasta's power was clouded by darkness as he used it to massacre his attackers. He buried his beloved teacher, and now, using his powers to destroy anyone who dared to pursue him. 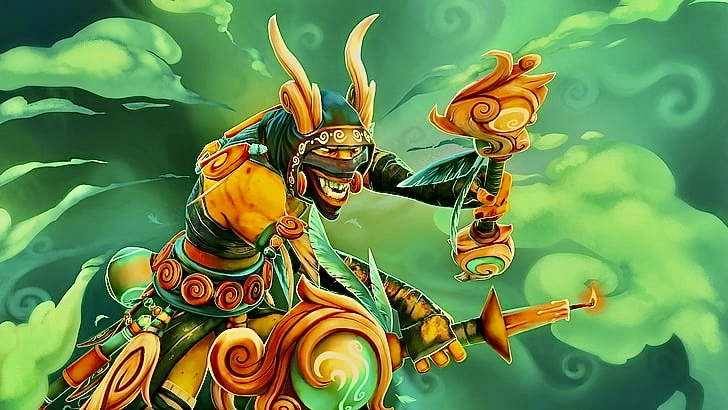 Get 1 point of Shackles (E) at the first level to have a hard control skill (up to 2.75 seconds, when your team hits the crate, it's hard for anyone to survive).

Maximize Ether shock (Q) first to get the source of damage (ks is also good), then maximize Hex (W), because this is a super control skill, lock the opponent's passive as well, then Shackles max lift (E). Ultimate get the correct level.

Effect: Creates energy waves that deal 140/200/260/320 damage to main target and jump to nearby enemies if available.

Effect: Turns the enemy into a chipmunk, removing their ability to attack and cast skills (including passive skills).

Note: If SS casts this move on an enemy clone, that clone will be destroyed immediately.

Effect: Cast a spell on 1 target enemy, during which time SS will immobilize the target and deal damage over time until the duration of the effect or when SS cancels the spell (actively cancels or eats it). stun, silent will be canceled).

Effect: Summons solid stakes at a selected location to attack enemies and structures within their attack range, dealing spreading damage. The Snake Pillar is a ward that can only be destroyed by basic attacks.

Magic Stick: Shadow Shaman's Magic Stick guarantees that he has burst regen when he needs it. If Hex is level 2 or lower, 150 mana is sufficient to cast it, as is Shackles.

Boots of Speed: Shadow Shaman's Boots of Speed are essential for closing the distance on a target and disabling them. Getting Boots ahead of your opponents might mean the difference between a kill and a loss.

Magic Wand: Magic Wand has all of the advantages of Magic Stick, plus more stats and more burst regen. It makes a difference if Shadow Shaman is used as a core or support character.

Arcane Boots: Shadow Shaman's mana pool is increased, and he gains some burst mana regen; Shadow Shaman frequently performs spells in a combo, thus he runs out of mana rapidly if he isn't equipped with a means of mana regen.

Blink Dagger: No matter what position Shadow Shaman is played in, Blink Dagger should be considered an essential item. Shadow Shaman may use Blink Dagger to swiftly climb on top of a gank target and use Hex to disable them, preventing them from reacting during ganks. As a core, it should be hurried as soon as possible, and obtaining it as a support should be prioritized.

Refresher Orb: Mass Serpent Wards may be used twice using the Refresher Orb, which is extremely handy for siege damage and confrontations.

Urn of Shadows: Over a Bracer, Urn of Shadows might be effective on a ganking Shadow Shaman. It offers him the same level of strength while also making him less squishy, and the mana regen helps him keep his mana pool up to date. Shadow Shaman can roam and gather charges easily since he is a good ganker. He may use them for more Pure damage in subsequent ganks or to maintain himself and his teammates at full health for more pushing potential.

Tranquil Boots: As a support Shadow Shaman, Tranquil Boots are a situational alternative to Arcane Boots. They are not only less expensive, but they also allow for faster positioning for casting disables on the adversary. Shadow Shaman's passive health regeneration also ensures that he is at full health at the start of battles.

Medallion of Courage: Because Mass Serpent Wards give physical damage, the Medallion of Courage is a particularly helpful equipment. Using the armor debuff on an enemy after boxing them in with wards will kill practically any hero in a matter of seconds. The active may also be utilized on teammates to increase their armor or on Roshan to make the Aegis easier to get. It may also be upgraded to a Solar Crest to increase its benefits even more.

Ghost Scepter: On squishy casters like Shadow Shaman, Ghost Scepter is a good pick. If an attacker tries to focus down Shadow Shaman with physical strikes, giving him invulnerability to physical damage might grant him time to react with disables and nukes.

Glimmer Cape: The Glimmer Cape is a powerful utility item that helps Shadow Shaman in a variety of ways. It may be used to aid initiation by allowing Shadow Shaman to approach foes unseen, and it can also be utilized to shield allies caught off guard by casting invisibility on them. Shadow Shaman can also use invisibility to shield himself while channeling Shackles on an enemy, minimizing the risk of being disabled by unit-targeted spells.

Force Staff: Force Staff is a weaker but still effective replacement for Blink Dagger. Shadow Shaman gains more mana as a result of the increased intellect, and the active may be used on both foes and friends, not only Shadow Shaman. It may also be used to shatter Linken's Sphere on a particularly slippery opponent player, or on Roshan before casting other disables, if purchased as a complement to Blink Dagger.

Aether Lens: In the hands of a Shadow Shaman, Aether Lens is highly strong, and it is readily obtained by deconstructing Arcane Boots. Aside from providing some mana regeneration, the increased cast range allows Shadow Shaman to disable foes from a greater distance, making him a far more dangerous menace in ganks and engagements.

Eul's Scepter of Divinity: Shadow Shaman's Eul's Scepter of Divinity is a strong item. The item itself offers Shadow Shaman better mobility, compensating for his slow base movement speed, as well as increased intellect and strong scaling mana regen to fuel his expensive and spammable spells. The active may also be utilized to quickly cripple an opponent from range and then install Mass Serpent Wards on top of them, effectively boxing them in.

Rod of Atos: The Rod of Atos is a useful thing to have. It increases Shadow Shaman's intellect, allowing him to cast spells more frequently, and it reduces his squishiness by increasing his HP. Shadow Shaman may also use the active's extended range to root foes from a considerable distance, giving him another disable.

Scythe of Vyse: Scythe of Vyse is an extremely potent late-game equipment. In addition to the increased stats, greater mana pool, and scaling mana regen, the instant Hex may be used in conjunction with the Shadow Shaman's inherent spell to hard-disable a single target for up to 12 seconds.

Force Staff: Force Staff manages to get out of Mass Serpent Ward but not Shackles.

Lotus Orb: Hex and Shackles are reflected in the Lotus Orb.

Smoke ganking, going around the jungle and then getting behind the enemy to gank are common for supports when roaming, but SS is quite thin, so you should avoid the lane creeps if you don't want to get caught council creeps (believe me, 4 creeps focusing on you alone will make your blood drop like pants). SS can also act as a support lane, your task is to pull (lure) and stack jungle monsters, from time to time run to the lane to tie up some idiot to help your teammates get kills or let it run away in some fields, a dangerous case.

If you have money, buy a Town portal scroll to switch lanes quickly. One more thing is that when ganking, you should pull the enemy's blood with an electric shock first and then tie it, but save the shock, you can always eat bricks.

At this time, you should work with the gankers and tankers to put pressure on the opponent by pushing the tower, also to prolong the time for your carry team to farm important items. It is not necessary to use solid stakes to push, when the team fight breaks out, the fact that you stick the stakes in the correct positions so that the stakes can do the most damage, when the enemy is exhausted or retreats cleanly, they do not dare to come out lane, you and your teammates can push without stake. Don't forget the ward quest during this phase, and of course don't forget to follow the Town portal scroll.

This is when SS is quite weak, because with the enemy's equipment, SS will easily evaporate quickly, it's best to go with your teammates, try to put a lot of pressure on the turret, SS is born to roam, gank in the early game and push the turret towards the end of the game, that's his unique trait. Choosing the right stake placement in teamfights or turret push is the most important thing you have to know.