“Some breathe fire. I breathe ice.”

Like many great poets, Auroth just wanted to spend all his time writing, but life as a Winter Wyvern is full of distractions. Eldwurm epics have a long and illustrious history, but some fear the surviving dragon scholars have not composed as many as in the past, as evidenced by the fragmented Eldwurm Eddas. a few more lines from the last great era. Auroth groaned: “We forget that life is not just about winning and ruling over enemies. Life is also about the pursuit of creative emotions.” She engages in travel research, collecting books for inspiration. But the whole research took a completely different turn, the time she spent writing less and less. She knew she should have hid herself in the cave to write new lines to Eddas, but instead she engaged in epic battles against powerful enemies. She plundered castles, raided ancient libraries… And if she happened to bathe in battle glory, she told herself it was just a byproduct of her research. In fact, although her skills and prowess on the battlefield have become legendary, her scholarly work is far from celebrated by the literary community. But being the protagonist of heroic legends was not what she aspired to be. She wanted to create her own legend. 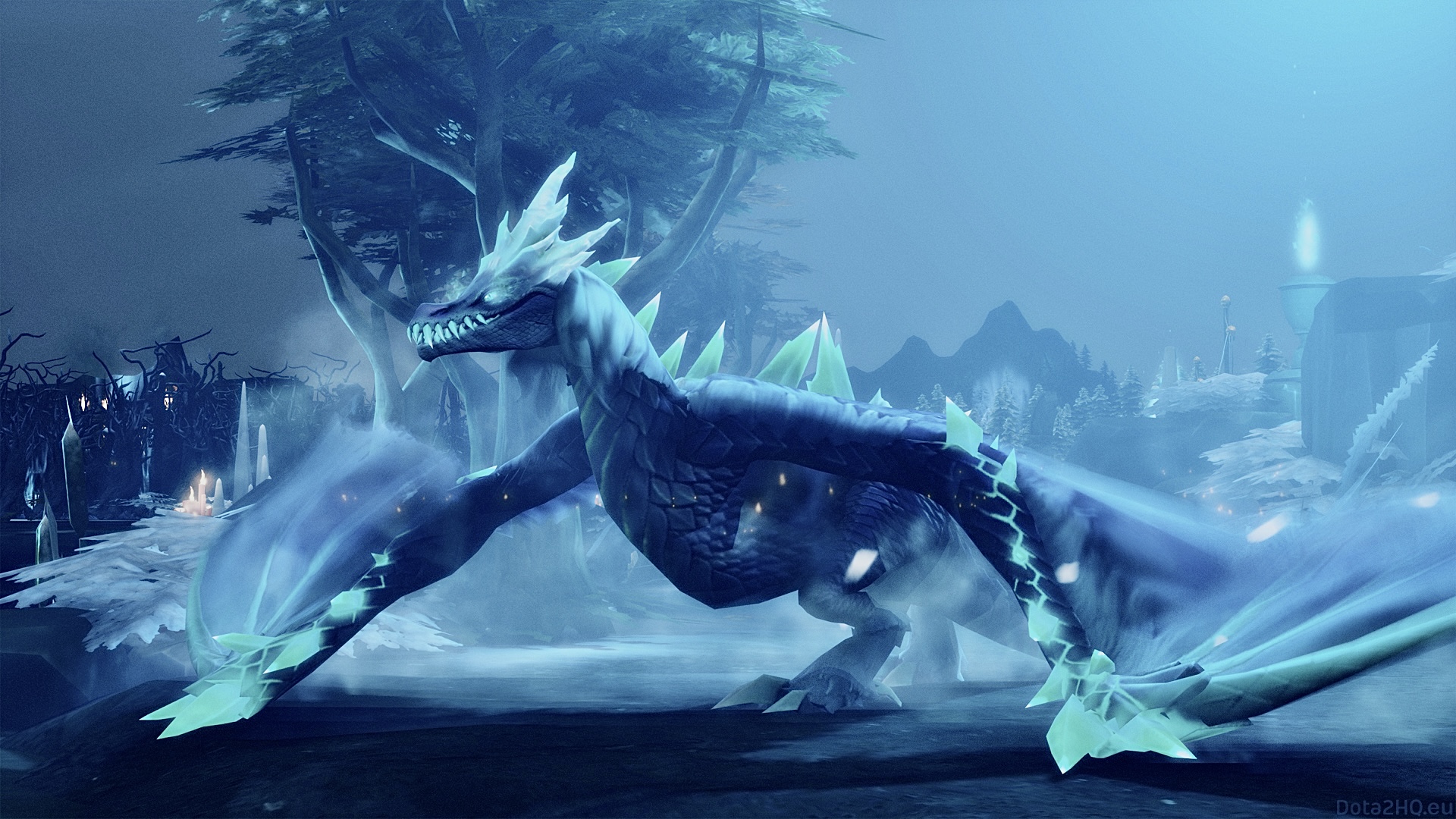 Maximize Arctic burn (Q) first because this is WW's main damage ability and it is easier to use than other skills, then Splinter blast (W). Cold Embrace (E) is a very good healing and saving skill with low mana and not too long cooldown. Ultimate get the correct level.

Effect: flaps his wings to fly high, gaining the ability to cross terrain, increasing attack range, and each shot of WW during this time deals bonus damage and slows the target

Damage: 6% of current health per second.

Effect: spews an ice ball at the specified enemy, upon impact with the target, the ice ball shatters and deals 100/180/260/340 damage and slows movement speed on enemies. Enemies around the main target (main target takes no damage or effects from this skill).

Damage radius: 500 around the target.

Effect: envelops an allied unit in a block of ice, causing them to freeze, immune to all physical damage from all sources, and heal them for the duration of the effect. This ice block cannot be disarmed by debuff effects (Diffusal blade, Purge, Demonic purge, etc.).

Effect: Curses an enemy champion, causing him to stand still for a period of time. During this time, nearby allied units of the bad guy will be forced to attack that enemy with hand damage. If the target is killed by this method, the life will be counted for WW. This skill cannot be dispelled.

Magic Stick: Winter Wyvern may use Magic Stick to get a burst of life and mana, allowing her to live just long enough to cast one more vital spell in a teamfight.

Boots of Speed: Boots of Speed will aid increase Winter Wyvern's sluggish movement speed, which will be especially effective while using Arctic Burn to get in position or chase/escape.

Wind Lace: Wind Lace also has a modest movement speed, which is ideal for weak or sluggish supports.

Urn of Shadows: Winter Wyvern gains increased attributes, armor, and mana restoration from the Urn of Shadows. The active may be utilized in conjunction with Cold Embrace to heal allies or to provide extra damage to her nuke arsenal.

Arcane Boots: Arcane Boots boosts your mana pool while also providing a method to restore it. It's possible to deconstruct it and turn it into a Holy Locket.

Glimmer Cape: In Winter Wyvern's hands, the Glimmer Cape is a cheap yet effective utility support item. It may be used on herself to allow her to approach the adversary secretly during initiations, or it can be used on an ally who is under the influence of Cold Embrace to bolster their magical resistance while also nullifying physical damage.

Spirit Vessel: Spirit Vessel is a natural upgrade to Urn of Shadows that increases her single-target damage.

Holy Locket: Holy Locket improves the healing from Cold Embrace and is readily constructed and dismantled from an upgrade of Magic Wand.

Mekansm: Winter Wyvern gains extra attributes and armor from Mekansm, and the active offers her another way to heal teammates in addition to Cold Embrace.

Guardian Greaves: Winter Wyvern and her allies regain a large amount of health and mana thanks to Guardian Greaves. Mend also eliminates any negative debuffs that would make it difficult for her to use her skills.

Force Staff: Winter Wyvern's utility is considerably increased by the Force Staff, which is an inexpensive multifunctional equipment. The active can let her position herself more readily for casting spells, especially to get Winter's Curse off on a key target, and the intelligence and life regeneration offer her more mana and improved roaming ability. During Cold Embrace, it can also relocate teammates to a safer location.

Aether Lens: Aether Lens increases mana and mana regeneration, as well as the cast range of skills, allowing them to be used further away from threatening adversaries.

Solar Crest : Winter Wyvern receives a slew of great benefits from Solar Crest for a relatively low cost. Her armor and characteristics make her a lot more tanky, while the mana regeneration keeps her mana pool full. The active may be used on a Winter's Curse target to degrade their armor and increase their chances of being killed.

Blink Dagger: Blink Dagger is an excellent technique to boost Winter Wyvern's mobility and make it easier for her to use Winter's Curse.

Lotus Orb: Lotus Orb removes certain debuffs from the victim and offers them a shield to reflect single target spells, which may dissuade foes from utilizing abilities on them.

Scythe of Vyse: Winter Wyvern's intellect is considerably improved by Scythe of Vyse, which also offers all-around characteristics and ample mana regeneration to power her expensive spells. The hex is a strong hard-disable that greatly improves her ganking and teamfighting abilities.

Black King Bar: Winter's Curse will not taunt enemies that are impacted by Black King Bar. They can still be directly targeted by the spell, which might be handy for securing vital carries for a few crucial seconds (e.g. a Sven that has just activated his ultimate and Black King Bar and is about to wreak havoc on your team). Additionally, the debuffs from Arctic Burn and Splinter Blast will not work.

No matter at any stage of the game you are really strong thanks to your skill set, Arctic burn (Q) is a very poor damage and holding skill right from the early game, you can You can easily get kills if you have the support of your teammates, but to roam, you need to be lvl2 or higher, then with 2 slow skills, Arctic burn (Q) and Splinter blast (W) you will roam very easily.

Note with the skill Splinter blast (W) that it does not cause effects and damage to the main target, so you need to choose carefully before using it, this skill is quite far, so you can roam. Many surprises when using this skill, turn on Arctic burn (Q) and discharge bullets with teammates. Cold embrace (E) is a skill that guarantees you the ability to heal yourself and your teammates, the rest is only your mana amount.

This is when both teams are trying to push the enemy's outer turrets, always keep the Town Portal Scroll in your body to make sure you can push and promptly support the turret and nearby teammates. Remember to fully ward to push as well as gank enemy heroes. Depending on the situation, you and your teammates can mobilize a total push to end the game early if you find that in the late game your team can't win against the opposing team. Winter's curse (R) is a very powerful control and damage skill if you choose the right target, location and time (for example, the other party has Sven biting and turning on MoM, for example, cast on your teammates. he let it smash).

At this stage, all heroes on both sides have quite a lot of equipment in general and support like you in particular, so warding in this stage will be easy to forget, keep this in mind. there and try to reserve at least 1 slot to store wards, because just a little negligence will lead to your team losing the soldier, even losing at that time.

In the total combat, use Winter's curse (R) on the enemy's thin targets to finish them off the fastest, especially the ones near the carry, they will treat you well, then use Splinter blast (W) causes disturbance and then turns on Arctic burn (Q) to discharge bullets and thick targets to limit their aggression. With a relatively long range, you can wrap yourself or save your teammates from physical damage with Cold Embrace (E). Winter's wyvern is a relatively difficult hero to play, but very good and worth trying, this is a hero with great potential in future ranked or competitive matches if put into Captain mode.