Helm of the Overlord

Beastmaster was born as a child of a family that worked for the court. His mother died shortly after giving birth to him, his father was a horseshoe for the king, and was trampled to death by the king when he was only five years old. Then Karroch was assigned to take care of the King's zoo, where he grew up, with all kinds of animals: Lions, Deer, monkeys, .... with limited understanding of everything outside. Everything was like that, until one day, an adventurer brought to the kingdom a beast that no one had ever seen, it was chained and dragged to the king, the beast could talk, but its mouth did not move at all. It conveys a call for freedom. The king just laughed and used the animal as a showpiece, when it refused, the king beat it with his staff and ordered it to be thrown into the kennel. In the months that followed, young Beastmaster brought in food and herbs to care for the injured animals, but only tried to keep the animals alive. Without saying a word, the beast started talking to the boy, and gradually, a bond between them formed and increased day by day until the boy discovered his ability to talk to everyone. the king's beasts.

One night the poor animal died, the boy's fury came, he opened the cage door for all the animals and drove them into the Palace, the Last King fell and he was beaten. tattered. In the chaos, a King Deer bowed to him, who had freed it and the other beasts. With the King Deer, he clung to it and it leapt over the wall surrounding the Palace, they escaped successfully. 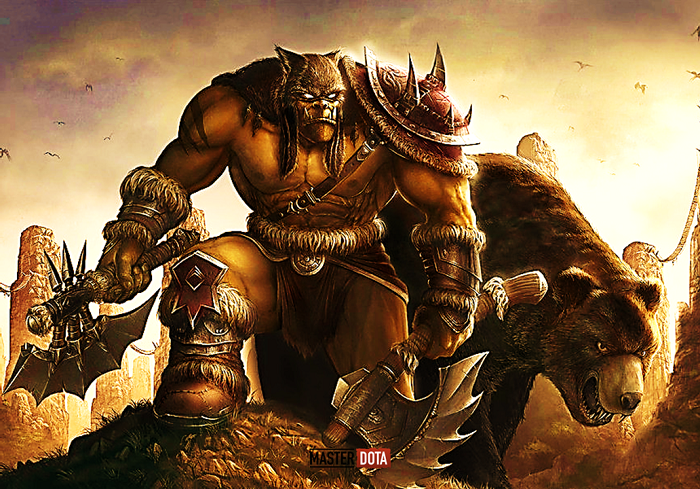 Now, as a man, Beastmaster still has not lost the ability to communicate and converse with animals. From a boy, he became a great warrior representing wild creatures, carrying the wildness of nature in himself. 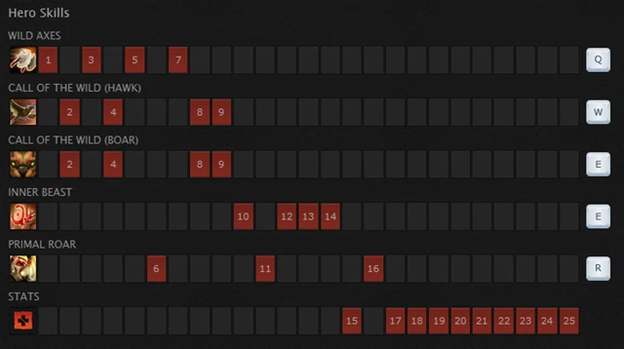 Maximize 2 skills Wild axes (Q) and Call of the wild (W) (E) to take advantage of extremely many aspects: vision, damage, ability to slow the enemy to gank (pig). it slows 40% at level 4 and penetrates bkb too, the bird gives a lot of vision, replacing wards in many situations). Inner beast (D) is obtained at later levels, when during this stage Beastmaster and his gang have already started pushing. Ultimate get the correct level

Effect: throw 2 ax blades to the specified position, these 2 ax blades will fly into an arc touching each other at the destination then return to BM, each ax blade passes through dealing 70/100/130/160 damage Damages enemies and destroys trees on the way. Each ax blade can only deal 1 damage to 1 target —> stick both blades at the point of contact for x2 damage

Through the state of magic immunity

Call of the Wild Boar

Effect: summons a wild boar to fight under the control of BM, this pig has the ability to slow the opponent on each basic attack

Call of the Wild Hawk

Effect: Summons a falcon under BM's control, this bird gives high visibility (ie vision is not affected by trees and terrain). When not moving, the falcon gains stealth

Note: when adding 1 of 2 skills to summon a bird or a pig, BM also receives the ability to summon the other (ie, just adding points to 1 summoning skill, you can summon a bird-pig duo)

Effect: A loud roar creates a shockwave that deals 200/250/300 damage to the target enemy and stuns the target for a duration. Enemies standing in the path of the shockwave will be swept aside, taking the same amount of damage and being slowed.

Through the state of magic immunity, blocked by Linken's Sphere

Boots of Speed gives increased movement speed to get Beastmaster in the cast range of his abilities.v

The Refresher Orb allows you to use Primal Roar twice in a row. You'll be able to call an additional boar and hawk as well.

Quelling Blade: Beastmaster can last hit easier with the Quelling Blade since it deals extra damage to creeps.

Soul Ring: Beastmaster's Soul Ring provides him with strength and health restoration, as well as mana to utilize skills.

Drum of Endurance supplies life, offers you much needed mana, and boosts your ability to reach in range to utilize Primal Roar on opponents. It also greatly boosts the attack speed of your Boar.

Vladmir's Offering works nicely with Inner Beast since it increases both damage and survivability for your squad. Also, Beastmaster is able to stay outside of base thanks to the lifesteal.

Solar Crest adds more armor, attributes, and mana regeneration to your character. You may assist teammates in bringing down Roshan sooner in the game by using Inner Beast and summoning.

Even with Black King Bar, Primal Roar utterly eliminates Sven from the fight.

You can go dual lane, solo lane or mid lane, with any lane you can still play on par with the opponent, but the amount of mana is your main problem, about the skill Call of the wild ( W) (E) it consumes very little mana, you can use pigs often to harass the enemy, release birds for vision. Wild axes (Q) is quite mana-consuming, so you should use it carefully, moreover, with the range, speed of the ax blade and the way it deals damage, throwing the ax deals damage at the point where the two axes touch each other. most damage, pay attention to this. Once you have your ultimate, just pick up your ass and gank.

At this stage you have to know the balance between farming, pushing and ganking. With Blink dagger, your ganking ability is greatly improved. The Town portal scroll is an indispensable item in your inventory. Call of the wild (W) (E) is still very important throughout the game, using the right bird-pig pairing gives your team a huge advantage in terms of vision and ability to slow the opponent.

You are an initiator, so leaving the squad at this stage is extremely dangerous if your teammates are shoved or forced to fight without people. With Primal Roar (R) you start the fight extremely easily by combining with Blink dagger, then release the pets to beat the enemy. Wild axes (Q) now do not deal much damage to champions anymore so at this stage their armor is relatively thick, but creep armor is different, this is your very good home defense or cleanup tool.

At this stage, birds are an extremely important tool to control vision, using birds appropriately will help your team capture the opponent's moves, thereby making decisions to catch the basket. The opponent is unexpected and highly effective. Primal roar (R) stuns through bkb, so you can use it on any target that doesn't have Linken's sphere, but the priority is still on dangerous targets: nuker, initiator, carry.