Like Golems or gargoyles, Earthshaker was once a part of the motherland, but now he can roam the earth freely. Unlike other creatures, Earthshaker created himself from his own will, and served no one but himself. In his restless sleep on a deep cliff, Earthshaker sensed that life existed freely above. And his curiosity began to grow.

Then, one day when the Nishai Peak began to transform and create avalanches, changing the river's flow and causing the valleys to turn into bottomless abysses. After the earthquake, Earthshaker stepped out as the dust cleared, brushing away the large rocks as if taking off a cloak.

Earthshaker took the form of a mortal beast himself, and named himself Raigor Stonehoof. Now, he could be wounded, he could breathe, and he could also die. However, his spirit still exists with his motherland, his strength lies in the powerful Totem pillar that he always carries with him. And when he returns to the dust, the motherland will still welcome him like a defiant son who has returned home. 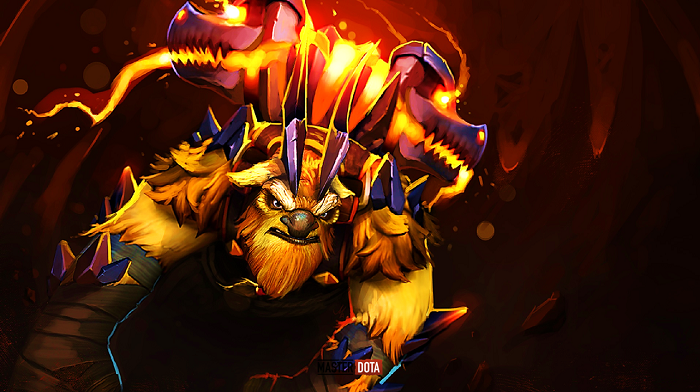 Get 1 point of Fissure at the first level for a control skill, moreover if you align properly, the opponent can be blocked by the stone wall, creating an easy opportunity for your team to eat fb. Maximize Fissure and Aftershock first to take damage and have more time to stun enemies, take 1 point of Enchant totem for a bit more damage and the ability to activate Aftershock. Ultimate get the correct level.

Effect: hurls the totem in the target direction to create a stone wall blocking the way, dealing 110/160/210/260 damage to all enemies and stunning them in the area of effect.

Effect: slams the totem tree to the ground, injecting energy into it. ES' next attack will slam the enemy with a totem and deal bonus damage.

Charm duration: 14 seconds or until attack

Effect: Every time he casts an ability, ES leaves aftershocks on the ground around him, dealing 50/75/100/125 damage and stunning nearby enemies.

Effect: slams his totem into the ground with tremendous force, dealing 160/210/270 damage and creating a chain reaction based on the number of enemies in the area, causing them to take additional damage.

Magic Wand: If the adversaries use their abilities often, the Magic Wand may be a strong source of health and mana restoration, and it can even be utilized in a pinch to recover enough mana for his Fissure.

Soul Ring: In the early game, Soul Ring provides an alternate supply of mana, allowing Fissure to be used freely.

Blink Dagger: For Earthshaker to begin with Echo Slam, Blink Dagger is a must-have equipment. It may also be utilized to pursue fleeing adversaries and use his Enchant Totem to take them out.

Force Staff: Because you can initiate from even further out with Force Staff, it works as a complement to Earthshaker's mobility. It may also be utilized to get out of sticky situations, particularly with Power Cogs.

Aghanim's Scepter: Earthshaker may use Aghanim's Scepter to leap into engagements with Enchant Totem, providing him even more mobility. It also gives him a significant boost in his stats.

Eul's Scepter of Divinity: Eul's Divinity Scepter boosts mana pool and regeneration. As an Earthshaker, the active adds an extra disable on the adversary and dispels silence.

Ghost Scepter: If you're being chased by physical assailants, Ghost Scepter can kite them and buy you time.

Glimmer Cape: Earthshaker's magical resistance is increased with the Glimmer Cape. When the opponent is undetected, the active can assist himself or an ally in escaping.

Veil of Discord: Veil of Discord can make his own abilities and any allies' skills that are impacted by magic resistance do more damage.

At the beginning of the game, go with your teammates to the rune position immediately, the possibility that you will get the fb is quite high if you base the Fissure to block the standard path, and also let the important heroes eat the bounty runes to gain the initial advantage of the game. gold and exp.

You can stick to the support lane or roam/gank very well. If you play in the support lane position, go pull the jungle monsters and stack camp, sometimes stand in the Fissure forest to block the enemy's path for your teammates to match, curiously run to the Enchant totem again and knock on their heads if you have them. body. You need to get the basic equipment to be able to roam/gank regularly. Remember to fully ward and clear runes during this phase.

At this stage, you and your teammates control vision, create favorable conditions for a safe carry farm, and effectively gank with your teammates. With Blink dagger, your ganking ability is greatly improved. The Town portal scroll is an indispensable item in your inventory. Fissure is a super skill due to its long range and huge stun area with the ability to block the road, please be precise to strangle the ill-fated enemy. Areas of effective use of Fissure include forests, low-to-high elevations and narrow paths. Don't forget to buy eye plugs.

You are an initiator, so leaving the squad at this stage is extremely dangerous if your teammates are shoved or forced to fight without people. With Echo slam, you start the fight extremely easily by combining with the Blink dagger, then release all other skills in turn (so that the stun time reaches the maximum). When there is a Refresh orb, sometimes you only need to hit Echo slam twice to eat Rampage, always remember one thing is to use Fissure carefully in this phase, because as long as you block squeeze 1 phase, your team There will be a small price to pay.