"Through conflict, one's nature is revealed."

A seam of sacred jade runs deep among the Upland crags and cliffs, long avoided by highland miners. The likeness of the great general Kaolin was carved and buried at the head of a ten thousand-strong stone funerary army—a force of soldiers and holy men, jesters and acrobats, carved by craftsmen and entombed for millennia in the dark embrace of the Earth.

The craftsmen were unaware that the spirit of the Earth itself—an elemental force at one with the planet—flowed within the strange jade seam. After gathering its strength over a thousand years, the force within the carved jade managed to dig itself free and into the light when it was separated from the world's lifeblood. Currently, the powerful Kaolin Earth Spirit fights for the spirit of the Earth as he moves along the Upland roads. When necessary, he summons the last of his army that is buried and still bound in the soil's protective embrace. 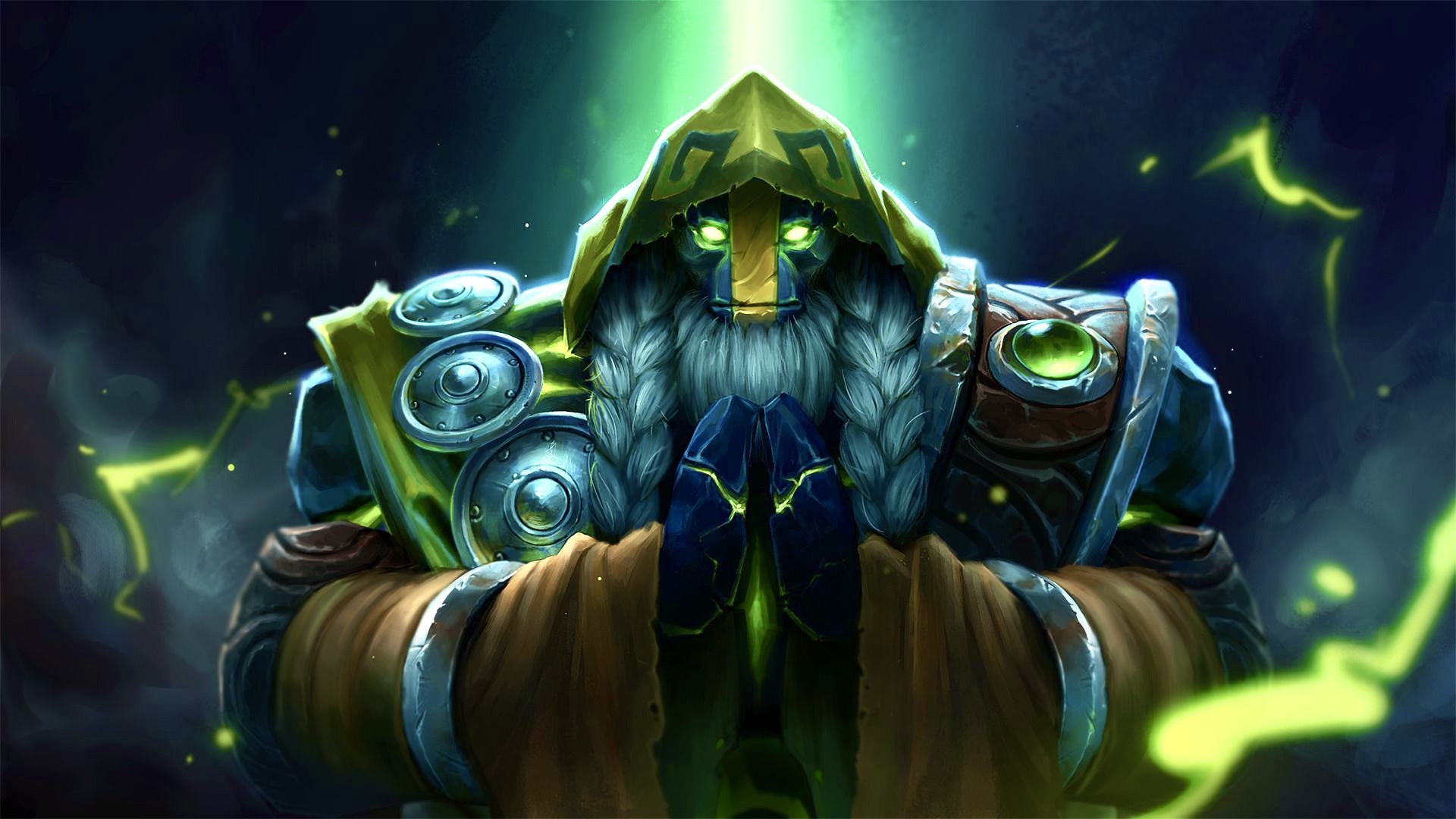 Effect: The target enemy or ally is destroyed by Earth Spirit, who then sends them in the direction he is facing. Earth Spirit will destroy the closest Stone Remnant in a 200-radius range if he targets a specific area. All enemy units that the traveling unit or Remnant hits suffer damage. A Stone Remnant also slows down any enemies it strikes. Other units can't travel as far as stone remnants can.

Note: Depending on whether Earth Spirit wants to smash a far-off remnant, a nearby remnant, or a unit, Boulder Smash has different targeting guidelines.

Effect: After a 0.5s delay, Earth Spirit forms himself into a boulder and rolls toward the target area, dealing 30 + 100% STR damage and stun enemy units. If he bumps into an enemy hero or is stunned, he will stop. He will move farther, faster and stun enemies for a longer period of time if he rolls over a Stone Remnant.

Effect: Stone Remnant is drawn by Earth Spirit. Enemies who are hit by the gripped target are silenced and take damage.

Effect: Send a Stone Remnant to the chosen location. Stone Remnants have no vision, are invulnerable and can be combined with the abilities of Earth Spirit. Calling a Stone Remnant uses a charge that must be recharged over time.

Effect: A hero is momentarily endowed by Earth Spirit with the abilities of a Stone Remnant. The remnant eventually breaks, releasing the hero and harming nearby enemies. On Stone Remnants, it is castable. when used in that manner, has a 5-second cooldown.

Effect: Magnetizes nearby units, causing them to take damage for a short period of time. Magnetized heroes cause nearby Stone Remnants to explode, destroying the remnant and increasing the duration of Magnetize on all nearby enemies. This procedure can be repeated several times. If an enemy is affected by Geomagnetic Grip or Boulder Smash, the effects are shared by all magnetized heroes.

Magic Stick: When in a lane against heroes who harass you by spamming low mana cost spells, this is a useful pickup. Because of your low early mana pool, you will greatly benefit from having an additional source of mana regeneration for casting spells in a pinch.

Urn of Shadows: Is a great pick up for extremely active Earth Spirit players because he excels in teamfights and ganks, is a strength hero who can gain from more mana regeneration, and is a very powerful teamfight and gank hero. The active ability can be used to deal extra damage to an enemy while ganking them or to heal teammates after teamfights or ganks. As only one Urn will receive charges when an enemy hero dies nearby, make sure to ask your teammates if any of them plan to buy one as well.

Blink Dagger: It has a short cooldown and costs no mana to use, allowing Earth Spirit to position himself conveniently for casting his spells.

Force Staff: Reposition Earth Spirit quickly to better use his abilities and to get away from lost battles or ganks. The active can also be used to heal nearby allies or kill enemies to make room for your spells. The health regeneration helps him maintain full health as needed, and it also increases his mana pool so he can cast more spells.

Veil of Discord: If your team has multiple spellcasters, this is advantageous. It provides a large amount of intelligence to improve Earth Spirit's mana pool, and the extra armor is very useful because he frequently initiates battles right in the middle of them. The reduction in magic resistance on enemies works well with all of Earth Spirit's spells, but it works best with his ultimate, Magnetize, because Magic Weakness' long debuff duration can stay in place while refreshing Magnetize on enemies.

Aghanim's Scepter: Enchant Remnant is a new ability that greatly increases Earth Spirit's ability to disable enemies, save teammates, and initiate during teamfights and ganks.

Observer Ward: Allows gankers like Earth Spirit to set up kills for the team.

Arcane Boots: AIf no other mana regeneration items are built on Earth Spirit, they are almost mandatory. As a strength caster, he greatly benefits from the larger mana pool, as well as the mana replenishment provided upon activation. Arcane Boots can also help your team, especially if your allies are low on mana.

Eul's Scepter of Divinity: Can be advantageous to build in circumstances where farming a more expensive item is unfeasible. The enhanced mana pool and regeneration ensure that Earth Spirit will always have enough mana to cast his spells, and the increased movement speed makes it simpler for him to get into position for them without the need for a Blink Dagger or Force Staff. Additionally, you can use the active cyclone to instantly silence an enemy to prepare for your other spells while also making yourself temporarily immune to debuffs like silences.

Glimmer Cape: Is a low-cost utility item that can make Earth Spirit more elusive and grant him additional initiation power, enhancing his already strong mobility. When combined with Rolling Boulder, the active can allow him to initiate invisibly, cloak himself for escapes, or provide him with strong magic resistance when jumping in during teamfights. It also allows him to do the same for allies, and it works in tandem with his ability to save teammates by pulling them out of danger using Geomagnetic Grip.

Solar Crest: Provides Earth Spirit with strong physical damage resistance and bonus armor, and the passive mana regeneration fills up his mana reserve. Beyond his already effective disables, Earth Spirit's active can be used on both allies and enemies.

Heaven’s Halberd: Is effective against foes who depend on their attacks. The targeted hero will be unable to attack due to the disarm, rendering most hard carries useless until the effect wears off. Additionally, Earth Spirit will receive more health, status resistance, and evasion from Heaven's Halberd, all of which are beneficial for surviving battles.

Rod of Atos: Gives Earth Spirit attributes to give health and mana, as well as a root to help him better target immobile targets with his abilities.

Blade Mail: Is a practical mid-game item that offers Earth Spirit many advantageous advantages. His small mana pool is supported by intelligence, his armor protects him from physical damage, and his attack damage increases his physical damage output, making it easier for him to farm late-game items when necessary. The enemy may be deterred from attacking you if you use the item's active ability while initiating, which is the most important benefit because it gives you more time to cast spells as necessary.

Mekansm: Enhances Earth Spirit's already effective armor regeneration and health restoration, making it a good utility pick for your team. However, keep in mind that it has a much higher mana cost than any of your other spells, so you must first expand your mana supply. If you don't, you might prevent yourself from casting your other spells after healing your team or after performing your spell combo and healing your team. Keep in mind that a team only needs one Mekansm, so make sure your teammates aren't planning to buy any.

Pipe of Insight: Is useful against a group of casters, but also in most other situations. The additional magic resistance keeps Earth Spirit alive during initiations, and the active shields all allies for a brief period of time from magical damage. Additionally, Earth Spirit can stay in the field longer without having to go back to the base for healing thanks to the increased health regeneration.

Lotus Orb: Gives Earth Spirit defense against spells with a specific target, or enables him to give his allies this defense. The item offers armor, extra bonus damage, health and mana regeneration, as well as.

Shiva’s Guard: Both the size of Earth Spirit's mana reserve and his physical survivability are greatly increased. Because you can apply the blast to the entire enemy team almost immediately, slowing them down enough to catch them all with Magnetize, the active ability can be used in conjunction with starting a teamfight with Rolling Boulder.

Scythe of Vyse: Enhances the attributes and mana regeneration of Earth Spirit. Hex, an instant disable that allows him to control a crucial target, is also provided.

Guardian Greaves: Can significantly increase Earth Spirit's ability to survive when starting teamfights. Upgraded from Arcane Boots and Mekansm, it takes away Mekansm's mana cost while giving Earth Spirit a powerful teamfight aura and the ability to self-dispel himself of debuffs.

Pipe of Insight:  Makes it difficult for Earth Spirit to deal significant damage in a wide area by significantly reducing magical damage. Eul's Scepter of Divinity, Manta Style, Guardian Greaves, and Lotus Orb are items that can remove afflictions.

At the start of the game, your role will be determined by your position in the team, whether you are here as a support, a solo offlane, or a solo mid lane.

Your ganks will determine your team's success in the mid game. You have consistent abilities to stun or silence enemies. Prepare any items that may be required before performing gank, such as dust or smoke. And don't forget to coordinate the gank with your friends. Remember to focus on one target first, kill him, and then switch to another. It is highly recommended to chain stun, waiting for the stun to complete before casting the next stun.

For initiation using Earth Spirit, use the Rolling Boulder to advance towards the enemy, but don't forget to place the stones shortly after rolling so that the farther distance performs. Then you can use stun (Geomagnetic Grip) and ulti, and don't forget to use silence (Boulder Smash). If your combo is correct, the enemy will dither and his HP will decrease, allowing your friends to easily defeat the enemy.

In the late game, your primary role is to create space for your teammates as an initiator. As always, use the Rolling Boulder to roll towards the enemy, stun, ulti, and silence. If everything goes well, after initiating a teamfight, all enemies will be exposed to damage equal to 20-30% of their health, as well as stunned and silenced. And it would make it easier for the carry to finish them off.